My Senior Year of Awesome 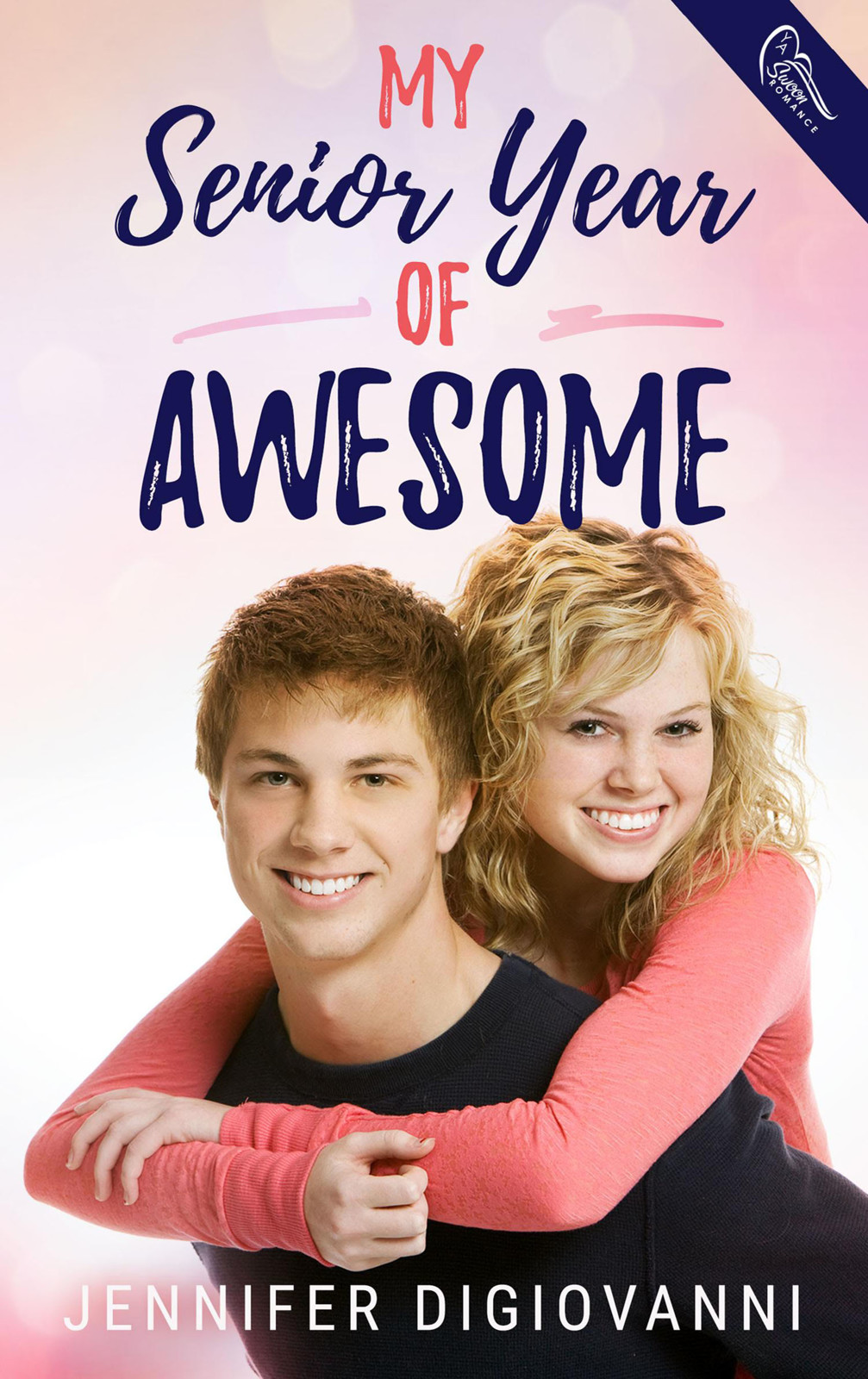 MY SENIOR YEAR OF AWESOME 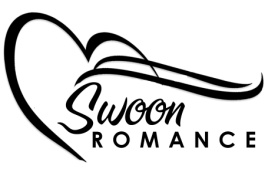 MY SENIOR YEAR OF AWESOME by Jennifer DiGiovanni

All rights reserved. Published in the United States of America by Swoon Romance. Swoon Romance and its related logo are registered trademarks of Georgia McBride Media Group, LLC. 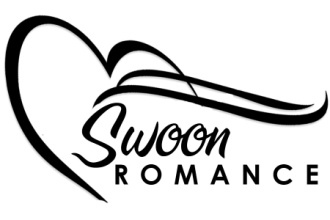 To my awesome family, Dean, Dean Christopher, Matthew, and Kristen

MY SENIOR YEAR OF AWESOME

Today is the beginning of the end. My last semester at Harmony High. Less than six months until graduation. Walking to school, my legs shake. My rapid breaths puff in front of me, short bursts of mini-clouds. By now, everyone knows where they’re headed in the fall—everyone but me. I don’t know why I can’t get over my denial. My high school education is all but finished, yet I haven’t applied to one college. Sure, Mom asks me what I’m doing about it. Every. Single. Day. The future looms like a swaying two-ton piano threatening to drop on my head. But I’m not ready.

I tug the zipper on my puffy, green jacket higher, slowing my pace as I travel the last block to school. Around me, the sounds of laughter and shouting ripple through the frigid air. Two weeks off and we’re all happy to be together again. For now.

I slip through clumps of students, managing to fade into the scenery. After eleven-plus years with the same group of classmates, I’ve perfected the art of avoiding attention. To a majority of seniors, I’m just one more person to be forgotten when we all move on to bigger and better lives outside of our small town.

As I cross through the crowded intersection, a text buzzes in from my best friend, Jana.

Jana: The votes have been counted. Meet me in front of Mrs. D’s room

At Harmony High, the Senior Superlative vote is one of the few highlights of senior year.

Me: Be there in a few

I text back, then hurry up the walkway toward school.

“Hey, Sadie. Ready for mathletes practice today?” I turn to find Andy Kosolowski, who’s in the running for the title of
Most Likely to Succeed
. Not only does Andy have an enormous brain, but he’s also freakishly tall, with thick glasses and moppy-blond curls.

“Mathletes today?” Did I forget to check email over the break?

“Yep. Mrs. McCaffrey sent the new schedule out last night. She wants to get a jump on training before the county tournament season starts.”

Darn. I was hoping to ease into my last semester. “I’ll be there, I guess,” I say, unable to rise to Andy’s level of excitement.

“Oh, and I heard the Senior Superlatives are posted,” Andy says, falling in step next to me. Wow. Mathletes and a
Most Likely to Succeed
award all in one day. Andy must be in genius heaven.

“Nope. On my way right now. Want to walk together?”

When he pats my shoulder, I restrain myself from shrugging away. Don’t get me wrong, Andy’s a nice guy, and I’ve known him forever. But he’s not exactly the person I want standing next to me when the Senior Superlatives are announced. He’s not in the running for
Best Dressed Guy
or
Guy with the Most Awesome Ride
. No, that would be someone like Dominic Altomeri.

Like an answer to my prayers, Andy’s next comment is drowned out by the growl of a black Corvette Stingray rumbling down the block. Dominic’s ready to kick off the second semester with style. When his window rolls down and he waves to the crowd, I raise my hand and wave back, hoping he looks my way. But, as usual, I’m not even on his radar.

Dominic whips around the corner into the student lot, leaving me in his wake. I turn back to Andy, but now he’s gone too. Breathing a small sigh of relief, I head into school.

In the senior hallway, chaos ensues. Everyone wants to know who will win the coveted awards; those voted on not by teachers or administrators, but by our high school peers. I slow my pace, letting others pass me as I search for Jana.

Truth be told, I don’t expect to be chosen for an award. I’m not the funniest, smartest, or the prettiest. I’m not the crazy girl who face paints at home games. I’m Sadie Matthews, the girl who coasts through life with reasonably good grades and procrastinates all decisions away. The potentially cute (when I live up to my potential) sidekick of my super-chic best friend, Jana Rodriguez.

I turn in the direction of Mrs. Downey’s room, pressing through throngs of students. Teachers patrol the hallways, ready to report anyone loitering, but this morning, like most others, seniors ignore the empty threats.

“Get to class, everyone,” Principal Dailey announces over the intercom. “The Senior Superlative results will be revealed during homeroom announcements.”

When I round the last corner on my way to the yearbook moderator’s room, I find Jana dancing a happy hula.

“Hey, chica! Ready to see who was voted Most Fashionable?” she asks, a sing-song rhythm in her voice, her hips swiveling back and forth with each word.

Not wanting to crush Jana’s dreams of greatness, I suppress my skepticism—most of it, anyway. “Do you think we actually won something?”

Jana tugs off her flip mitts and shoves them in her jacket pocket. “I thought you voted for me for Best Dressed.”

“I did. Do you know if anyone else voted for you?” Thanks to the male voting bloc, the Best Dressed award usually goes to the girl in our class who pushes the limits of the school’s dress code. Halter tops, uber-miniskirts, that sort of thing. Jana dresses cute, but way too conservatively.

By the time we make it to the end of the hallway, a large group has gathered around the Yearbook Committee’s bulletin board. As Jana and I approach, a bunch of people turn around, all of them pointing and clapping.

“Wow, Jana. Maybe you did win Best Dressed,” I say, speaking out of the side of my mouth, lest we seem overexcited.

The crowd parts to let us in, a few people now laughing outright. I glance at the board and frown when I realize Mia Romonov has won
Best Dressed Girl
. Not a huge surprise given that she basically looks like a Russian model.

Jana bites on her lower lip and points to the very top of the board. “Um, Sadie, I didn’t win. You did.”

Smack in the center of the top row of Senior Superlatives, I spy my junior year photo, blown up to 8 x 10 size, set inside of a glittery heart. Also inside the heart is an 8 x 10 photo of Andy Kosolowski. The caption above the heart reads, “Most Likely to Get Married.”

I want to die. No, I want to puke. I want to puke and then die. Andy, the biggest nerd in all of
seniordom
? The boy who wore the same Darth Vader T-shirt every day of eighth grade? The guy who passed out at middle school graduation and was trampled on by the rest of our class?

“Is this a joke?” Waves of laughter circulate around me like a bubbling, too-hot Jacuzzi. “I don’t even like Andy,” I say, maybe a bit too loudly. “Not at all.” Eyes narrowed, I whirl around. “Who did this?”

And then Andy’s tall head appears above everyone else. He scans the board and finds his picture. His mouth falls open. His eyes meet mine. A swell of laughter reignites as we stare at each other. When he cracks a small smile, I elbow my way through what feels like most of the student body to confront him.

“You fixed the vote,” I say, poking him in the center of his extra-long torso.

“What? Why would I do that?” Andy looks completely confused.

“Did you think this would be funny? Like, ha-ha, let’s make fun of Sadie who hasn’t been on a date in … a long time.” Exactly how long is personal information.

He shakes his head, acting stunned. “Maybe they mixed up my picture with someone else’s.” Simultaneously, we redirect our eyes to the
Most Likely to Succeed
award, posted above a photo of Cindy Min. She’s ranked second in the class, albeit way behind Andy. I guess it takes more than brains to succeed.

“Listen up, people!” I shout, cupping my hands around my mouth like a megaphone. “I am so not marrying Andy Kosolowski. So ha-ha, joke’s on me. Hilarious.” I shoot one final look of disgust at my classmates and stomp off in the direction of homeroom.

I can’t remember ever feeling as humiliated as I do right now. By the time I slide into my seat next to Jana, my cheeks burn from the heat of thousands of eyes focused on me.

“I don’t want to talk about Senior Superlatives,” I tell her. “Not one word.”

Jana nods, feeling my pain. “Did you bring the book?”

Of course, with all the marry Andy nonsense, I’d nearly forgotten about the book. Every year my Aunt Tina sends me the latest version of
Fill It In,
a compilation of crucial lists to complete on one’s journey toward ultimate self-awareness. It’s the bible for confirmed
listoholics
like Jana and me, who spend hours debating the best type of cheese to include in a ham and cheese sandwich (Jana says good old American, and I choose sharp Provolone, but we both gave thumbs down to holey Swiss and frou-frou Brie.)

I pull the latest version of
Fill It In
from my backpack and crack the spine to loosen the pages. Jana squeals and grabs it out of my hands. She starts flipping through three hundred and sixty-five new lists, every single page offering blank lines begging for completion.
Twenty-five Strange and Random Facts about Me
.
Top Ten Food Cravings on Sunday Mornings. Fifteen Unique Hot Dog Toppings I Want to Try
. Stuff like that.

“I’ve been so waiting for this. What’s today’s assignment?” Jana twists away from me, prepping for the big reveal. “Ahem. Drum roll, please.
Coolest Baby Names for the 21
st
Century
. Dibs on girls.”

At least coming up with insane celebrity-worthy child names will divert my attention from the whole Senior Superlative mess. To avoid morning announcements, I excuse myself and hide in the bathroom until the bell rings. For the rest of the morning, while everyone stares and whispers about me and my future betrothed, Jana and I devote ourselves to baby-name research, hiding our iPhones under contraptions built with tented folders and notebooks.