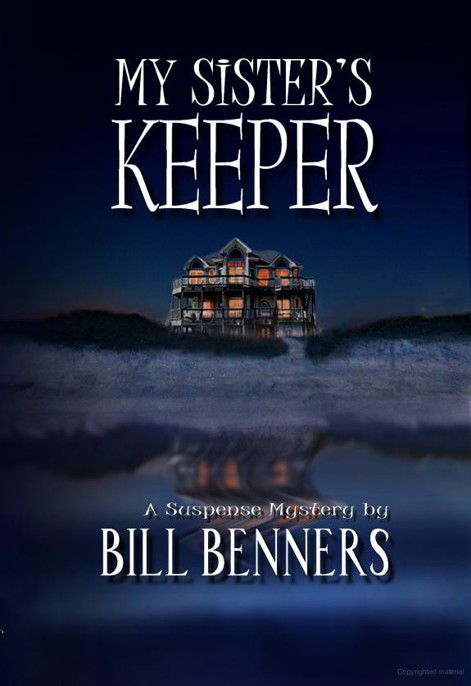 This riveting suspense thriller explores the special bond between a brother and sister when Richard Baimbridge rushes back to his coastal hometown of Wilmington, NC, to assist with his sister's recovery after she's brutally attacked and crippled investigating the rape of a 13-year-old. Coming face to face with his tormented past and a dark family secret, he fights to stay above the flood of childhood trauma and, serving as his sister's legs, is drawn into the dark underside of this quiet coastal community where he, himself, becomes the primary suspect in the murders of Wilmington's young girls. Promotional video can be viewed at the billbenners website.

"I couldn't put it down until I finished it. The plot has more twists and turns than a bag full of pretzels, and moves along at a whiz bang pace. The characters come alive throughout, and the descriptions are terrific. I am certain
My Sister's Keeper
will be a big hit and will make Benners a lot of fans, including me! This book shows a huge talent. I can't believe it is a 'first' novel." ----Tom Lewis, author of the Pea Island Trilogy and
Zena's Law

"Fasten your seatbelt and get ready for an incredible journey.
My Sister's Keeper
has as many twists as a saltwater creek and quickly moves forward with the ups and downs of a storm-tossed ocean, finally crashing to shore with the intensity of a category five hurricane." --Skip Crayton, author of
Remember When

"Fasten your seatbelt and get ready for an incredible journey.
My Sister's Keeper
has as many twists as a saltwater creek and quickly moves forward with the ups and downs of a storm-tossed ocean, finally crashing to shore with the intensity of a category five hurricane." --Skip Crayton, author of
Remember When

Bill Benners spent twenty years writing and producing programs, editorials, and commercials for radio while acting and directing in community theater. He wrote the outdoor drama
Blackbeard's Final Conquest
in the 1980s followed by two plays produced on the indoor stage in the early 1990s.

< i>My Sister's Keeper is Benners' first novel. He and his wife Dorrie reside in coastal North Carolina with their four cats and a Yorkshire Terrier named "Higgins."

This is a work of fiction. Names, characters, places, actual events, locales, and incidents either are the product of the author’s imagination or have been used fictitiously. Any resemblance to persons, living or dead, is entirely coincidental.

MY SISTER’S KEEPER
- Copyright © 2007 by Bill Benners. All rights reserved, including the right to reproduce this book or any portion thereof, in any form whatsoever without written permission except in the case of brief quotations in critical articles and reviews.

T
HOMAS WOLFE WAS RIGHT. You can’t go home again
.
And I wouldn’t have had it not been for my sister’s
accident
. I flew back to Wilmington, North Carolina, and sat vigil over her for weeks listening to the beeps and clicks of the machinery that kept her alive, pleading with her not to die. Martha was the one person in this world that had always been there for me, believed in me, looked up to me, and never
failed me. And I, Richard Charles Baimbridge, could not survive without her.

She kept me sane.

Even in the darkness of her hospital room, I could see beyond the bruises on her face to the whimsical little girl with auburn hair and bright eyes that had grown up alongside me. The curious perfectionist turned investigative reporter who would not let go of a thing until she’d figured it out. Like the time a girlfriend of hers showed up with a Rubik’s Cube. Martha was only eight at the time, but she’d spun and twisted that thing relentlessly—practically that entire summer—until finally she woke me early one Sunday morning holding it out in the palm of her hand. All the colored squares were in perfect alignment and there was a look in her eyes I’ve never forgotten to this day. I was twelve and had given it a serious shot several times myself to no avail. That was the first time she’d beaten me at something, but it wouldn’t be the last.

That moment established a pattern for her life. In some backward way, I became her motivation—her
inspiration
. If she saw me give up on anything, regardless of how insignificant—forgetting a phone number, finding the right nut to fit a bolt, or fixing a broken toy—she’d go after it with fanaticism and would not give up until she’d figured it out.

Being better than me challenged her and when she succeeded, it fulfilled her. I was proud of her, but not like Dad. Dad
loved
it. It seemed the more she outdid me, the more
he
liked it. And when she did beat me, he always cast that malevolent glare from the corner of his eye that cut deep and made me feel as though I’d stepped in something foul and tracked it into the house. By the time I left home at eighteen, there was a gap between my father and me that an ocean couldn’t fill.

The connection between Martha and me, however, only grew stronger. I envied that spark she had, that do-it-or-die attitude, and the way my father thought she could do no wrong. But his praise never seemed to mean much to her, and maybe that’s why she got so much of it from him. It
mattered
to me, though, and he knew it, and he manipulated it to cut out my heart. Ironically, she craved
my
praise instead of his and I gave it to her in heavy doses. It felt fantastic to be needed by somebody for something and I used it against him. Maybe that’s why he hated me so much.

God! If only I’d turned on her, belittled her, or ignored her, maybe she wouldn’t have ended up in her current state.

Though we’d talked on the phone weekly, it had been more than a year since I’d seen her. Her hair was shorter now, and she’d lost that baby fat that had lingered long past high school. Her eyelashes were long and thick—the envy of the whole family. Her cheeks were high and her lips were wide and thin like mine—typical of Dad’s side of the family.

I pulled a chair up next to her bed, took her hand, and studied her fingernails where tiny bits of pink polish lingered—reminders of a time when her life had been full of hope, ambition, and romantic dreams. Dreams that were going to die hard.

I’ll never forget that day. We talked on the phone for hours. She was ecstatic! Twenty-four years old, armed with a Master’s in communication, and craving that one big story with which to prove herself.

A few weeks later, Martha received a tip that a thirteen-year-old girl had been dragged to the top floor of an abandoned warehouse in Wilmington, raped by two men while being videotaped by a third, then bound, gagged, and thrown in the Cape Fear River to drown, and knew she’d found her story. It was a story I would come to hear Martha tell
over and over
…

“
A FRIEND FROM WILMINGTON CALLED and told me about the rape. She said the little girl had survived and that Sam Jones—a detective I’d gotten to know well while working for the
Wilmington Star-News
—had been assigned to the case. After a two-hour drive, I planted myself in Sam’s office and hounded him relentlessly until he finally agreed to let me have a look at the place where the rape had supposedly taken place. He told me to meet him there when he got off at 5:00 p.m.

“
It was Halloween and a cold front was moving in. The temperature had dropped fifteen degrees since noon. I arrived a few minutes early, pulling my Toyota into the dirt lot next to the abandoned plant, and parked facing a sagging eight-foot steel-mesh fence surrounding the property. Railroad tracks crisscrossing the grounds all led into a huge four-story corrugated metal building set back along the river’s edge. Among the tall weeds around the perimeter lay stacks of creosote-coated wooden railroad ties, rusting steel wheels, and bent rails. To the left of the building, a rickety dock jutted out into the Cape Fear River. Across the river, the trees were showing a hint of fall color.

Brotherhood of the Wolf by David Farland
For Better or Worse by Lauren Layne
City of Masks by Mary Hoffman
Hollywood Stardust Supporting Roles - Wilson and Giselle by Kim Carmichael
One Week in the Private House by Esme Ombreux
Cherokee by Giles Tippette
Reunited with His Werewolf Beloved by Anya Byrne
Alien Guardian's Baby (Scifi Alien Romance) (Zoran Warriors) by Luna Hunter
After the Before by Gomez, Jessica
Lucius (Luna Lodge #3) by Madison Stevens
Our partner