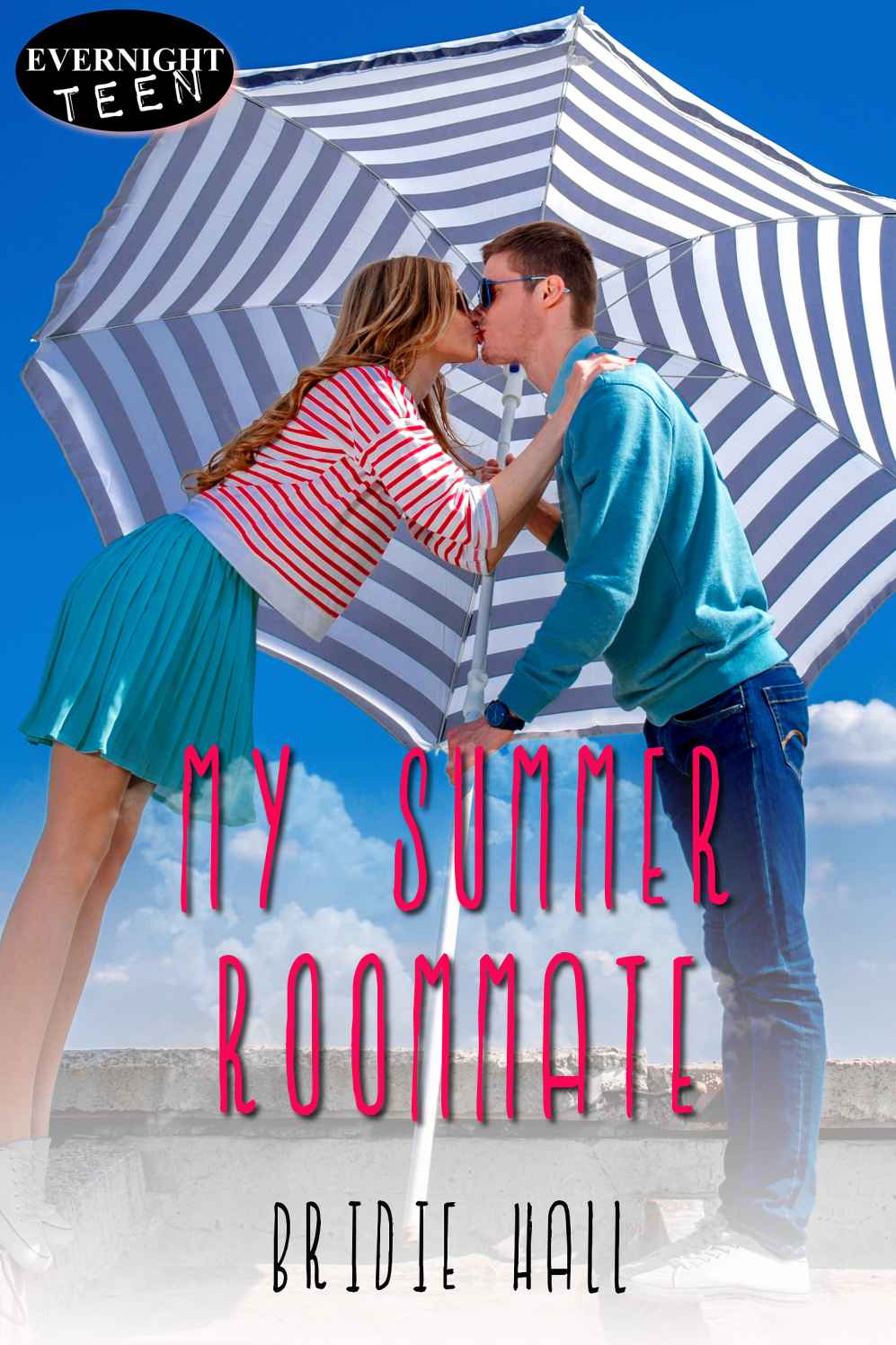 These are my last vacations before college and I plan to enjoy them. Trouble is, I have nowhere to live.

Mom’s selling our house because she can’t afford to pay off the loans she took to pay for my schooling. We were doing okay at first, until Mom’s arrangement with her publisher fell through due to the world financial crisis, or some such stupid-sounding excuse. All of a sudden, we owed a lot of money and we couldn’t pay our monthly installments. We decided—well, Mom did—to sell the house, which was too big for just the two of us anyway, and search for a smaller one. We didn’t manage to find anything suitable, but we got an exceptional offer for our old house that we couldn’t afford to turn down. So the only solution was to sell and move out. Eric, Mom’s boyfriend, invited us to his place, but I didn’t feel comfortable moving in with them. They were all lovey-dovey, what with their relationship being fresh and blossoming.

So,
right now as I’m entering the Spanakopita Deli with Isabelle, my best friend, my mom is moving her stuff to Eric’s place. I offered to help, but Eric took care of everything already, and he offered instead to help me find a rental room somewhere. But I took care of that.

“Remember Chris? He was in History with us this year,”
I say over my shoulder to Isabelle, as I lead the way into the deli. Isabelle’s expression is confused, but I know she remembers Chris. We’ve talked about him before. A lot of girls from class were all ‘gaga’ over him because he was hot and a snowboarder––or a shredder, as he called himself. Except for Isabelle, who’s had love troubles with Harper and Jamie, two brothers from Atlanta. Harper won. I like him well enough. I even had a crush on him way back when.

“That cute guy with
iPod earphones practically glued to his ears?” she asks, recognition lighting up her face.

“Yes
. I’m going to crash with Chris for the next two months,” I say quickly, hoping that Isabelle won’t react too strongly to the news.

I drop into a chair.

“Aren’t you going to stay with me?”

Isabelle said I should come live with her. But Harper hangs out at her place constantly, because their relationship is still in the head-over-heels stage, too.

“I don’t want to be in the way. You and Harper need some
alone time, Izzy.”

The waitress
takes our orders and then rushes back with a small bowl of peanuts.

“My dad’s there, too, and he’
s not in the way,” Isabelle says, taking a peanut and munching it absent-mindedly.

“Because he’s holed up in his study
all day long.”

I
smile and keep the tone light, but the thought of everyone around me starting their new lives, with their new, happy relationships, makes me feel lonely. Deserted. Even though I’m not looking for a relationship.

“It’s just for the two months until I go to college.”

“Okay, okay, I admit it. Watching you two being all crazy about each other would just make me envious.”

Izzy’s my best friend, which means I know her well enough
to have predicted such a response. Fact is, I broke up with Adam a few weeks ago. For the second time, but this time it’s for real. Of course Isabelle thinks I’m broken-hearted about it. I am sad, but not too much. I’ve never really thought our relationship would last. He was just a pretty boy, selfish and immature. I wasn’t looking for a long-term relationship, anyhow. I’m too young for that. Or maybe I’m too selfish and immature, too.

“Yeah.”
I sigh. I feel a bit guilty for not being entirely honest with Isabelle, but the waitress bringing our drinks distracts me so I forget it quickly enough. Besides, I’m doing it to give her some space. Well, her, and Harper.

“So ... You’re just moving in with this Chris? I didn’t know you were tight.”

“We’re not. I mean, I saw him at Adam’s birthday party. We started talking and he was sort of cool. We stayed in touch.”

“And he just
asked you to come live with him?” She looks incredulous, a bit worried, perhaps.

“I told Mark
—Jamie’s friend? The lacrosse team captain?—about my situation, and apparently he told Chris. He called me last week and said I could crash with him for the two months, no prob. He’s got enough space now that his roommate went back home for the summer.”

“Hm.” Isabelle looks thoughtful as she sips
her drink.

“How are
things with you and Harper?” I say to change the topic, because I don’t like her frowning. I grin when I see Izzy’s cheeks warm up. “That cozy, huh?”

“Uh-huh.” I’m amused by Isabelle’s short answer. She has always been very private and reserved. I wonder how that works with Harper, but my thoughts quickly veer into the gutter territory. Good thing Izzy can’t read my mind.

“Okay, okay,” Isabelle
says, holding up her hands in surrender. “He’s wonderful. He’s so much fun, and experienced and …”

I wiggle my
eyebrows just to taunt her and it has an immediate effect. Isabelle turns scarlet and starts to protest.

“I didn’t mean it like that. I meant in a general sort of way, like … he can teach me about life and such.”

“Sure.” I can’t help my lips stretching into a wide grin. This is better relaxation even than yoga.

“Well, he’s experienced … li
ke that, too.” Isabelle stumbles over the words, but it is obvious that she is more than happy about it.

I
snort in my tea, spilling it all over the table. “Good for you.”

Isabelle’s face radiates
with happiness, different than when she was with Jamie, Harper’s younger brother. I’ve always known Harper was the right one for her, but Isabelle didn’t believe me until she spent one long day with him on the way home from Atlanta. That road trip made her see that Harper wasn’t just an arrogant jerk that taunted her at every opportunity he got. I saw right through him the first time I saw him with Isabelle, long before they ended up together. I could tell he’d fallen for her and that he wasn’t the bad person everyone thought.

I’m
pretty good at that, reading people and their deepest secrets. I think that’s because I have experience guarding my own heart against selfish bastards, so I know all the tricks in existence. I’ve even invented some.

“You sure you’re going to
be okay with Chris?” Izzy asks.

“It’s just two months. He’s a cool guy. Honestly. I wouldn’t accept his offer if I wasn’t sure I could handle it.”

“Like what? I
’m trained in karate, you know.” I say it as a joke, but Izzy seems to be serious and unmoved by my bravery.

She
still looks unconvinced. I feel grateful for having such a good friend. She’d never let anything bad happen to me. It’s reassuring. Heart-warming. I don’t have many such people in my life. But I’m partly to blame for that. If you don’t give, you don’t receive, I suppose.

“Tell you what. On Saturday, you can help me move and you’ll meet him, spend some time with him. You’ll see
he’s a really nice person.”

“What did your
mom say about it?”

“Mo
m?” I repeat surprised. “I don’t think she heard me when I told her where I’m moving.”

My
mom. Isabelle knows all about her type. She knows her being absent-minded and careless is completely in character. It’s not that she doesn’t love me. She is just a distracted human being, more invested in her art than in what goes on in my life. She’s always been like that. In that, she resembles Isabelle’s dad. That’s what I mean when I say that Isabelle knows all about her type. Izzy and I have bonded over having irresponsible parents and having to take care of ourselves. Our strong friendship grew out of that, and we are both grateful for it.

“Okay, I’ll help with your move,” Izzy
says. Then she grins, and adds, “But I know you just wanted to enlist me with the move. This has nothing to do with Chris. You could’ve invited me to visit any time if this was just about meeting him.”

I don’t think Chloe even knew we shared a class until about two months ago when we started talking at a party. I’ve known who she was since my first day at her school. She wasn’t part of the popular crowd, except when she was with her ex
-boyfriend. She was in a class of her own. Chloe didn’t care about the social rules of high school, she had her own agenda and she followed it without hesitation or embarrassment. Unfortunately, I’ve never been on her agenda.

Up until that party. When I started talking to her, it became obvious that she was a very cool person. She told the best jokes, and she could read me like a frigging book. She made it fun battling it out with her because you had to really think
about what you said if you didn’t want her poking holes in your theory within a second. She was smart, on top of being hot.

I felt slightly bad for lusting after her
, afterwards. I was sorry I’d missed the chance to become friends with her during the school year. We’d all go our separate ways after this summer and I’d probably never see her again.

Tread Softly by Ann Cristy
Breathe for Me by Anderson, Natalie
Necropolis by Santiago Gamboa
The Echo by Minette Walters
El susurro de la caracola by Màxim Huerta
Cop Out by Ellery Queen
The Case of the Diamond Dog Collar by Martha Freeman
The Evidence Against Her by Robb Forman Dew
The History of the Medieval World: From the Conversion of Constantine to the First Crusade by Susan Wise Bauer
Will to Love by Miranda P. Charles
Our partner