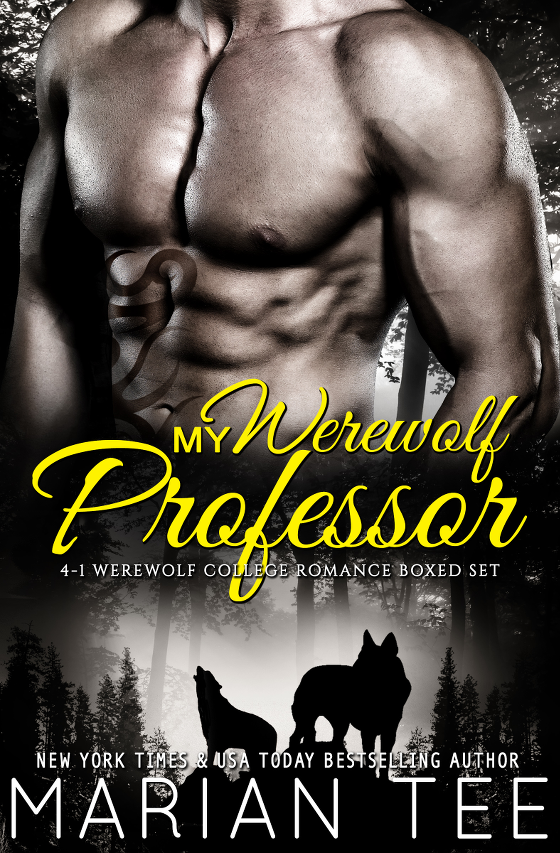 About My Werewolf Professor:

What I knew about Alessandro Moretti: he’s the sexiest man I’ve ever seen, he’s the most mysterious, sought-after professor in my university, and he’s not the type to fall in love with me, his plainest-looking student.

What I didn’t know about Alessandro Moretti: he’s a werewolf…and he may just want me, too.

18-year-old Kassia has decided to confess her love for Professor Alessandro Moretti. She knows she’s likely to be dumped, but instead the professor offers her…a bet?

Alessandro Moretti has always found Kassia, his extremely shy student, oddly attractive. When she confesses her feelings, he’s unable to help himself. For him, it’s all a game. After all, Alessandro knows from experience that nothing good can ever happen between a werewolf and a human, especially when one of them is as cynical about love as him.

This boxed set features all four parts of My Werewolf Professor.

Helios & MJ’s Story (3 parts) -
Even though he's commitment-phobic, the aloof president of a billion-dollar bike racing club finds himself jealous of the "secret crush" of a tomboyish camera-wielding first-year student.

My Werewolf Professor: 4-in-1 Boxed Set

Alessandro Moretti tensed even before the knock came on his door, the scent of her innocent arousal letting him know beforehand who his visitor was. It was
her
again. In the past, he was able –
barely –
to ignore the inexplicable tug of attraction he felt for her, a girl who wasn’t really his type. But with the mood he was in right now?

He might just succumb to his most basic urges and enter a relationship that humans like her considered forbidden.
Taboo.

Then again, he wasn’t human.

There was another knock on the door.

He toyed with the idea of ignoring it, for both their sakes.

But then she knocked more loudly. “I know you’re in there, Professor.”

He was known to be a serious man, one who rarely smiled, but hearing an 18-year-old girl speak to him like
he
was the one trying to hide from her made Alessandro smile.

With it, he made his decision, and he heard himself saying, “Come in.”

She entered the room, her every step enhanced with an unconsciously sensual grace that brought his cock to attention. His nostrils flared at the scent of her arousal, which was tinged with the sweet fragrance of infatuation. The scent circulated in the room, swirling around him like an invisible net of seduction. The smell was addictive. He couldn’t get enough of it, and it affected him so that his erection grew to noticeable proportions.

Realizing that his cock was practically near to bursting inside his pants, Alessandro swiftly walked behind his desk, lowering himself in his seat before his student could see how un-professor-like he was right now.

“Professor?” She came forward, stopping scant inches before his desk and biting her lip in a way that made Alessandro want to yank her into his lap. She was like a fragile flower, and he was torn between wanting to see her bloom with his touch – and crushing her to him so he could be the first to taste her virginal blood.

Her knee-length dress was made of red velvet, with a cute black collar that made her appear a lot younger than her just-turned-eighteen years. It was not really far from his own twenty-four years of existence, but age wasn’t
just
a number if one was human and the other was not. He was a Lyccan, a werewolf. His world was not her world, and hers could never be as dark and twisted as his.

“Hello, Kassia.” He cleared his throat after, the first time for him to have a need to do so. If he was thinking properly right now, he would not be saying that. Instead, he would tell her to get lost and never come back again. That was the only way she would be safe from his hunger, the only way her body would remain untouched.

A Dark and Lonely Place by Edna Buchanan
Swimming at Night: A Novel by Clarke, Lucy
A Kiss Before the Wedding - A Pembroke Palace Short Story by Julianne MacLean
The Sea of Time by P C Hodgell
The Enchanted Land by Jude Deveraux
Extraction by Turner, Xyla
Eleanor by Jason Gurley
Rum Spring by Yolanda Wallace
Petronella & the Trogot by Cheryl Bentley
HOT SET: Playing with Fidelity (A romantic suspense novel) by Northe, Kerry
Our partner