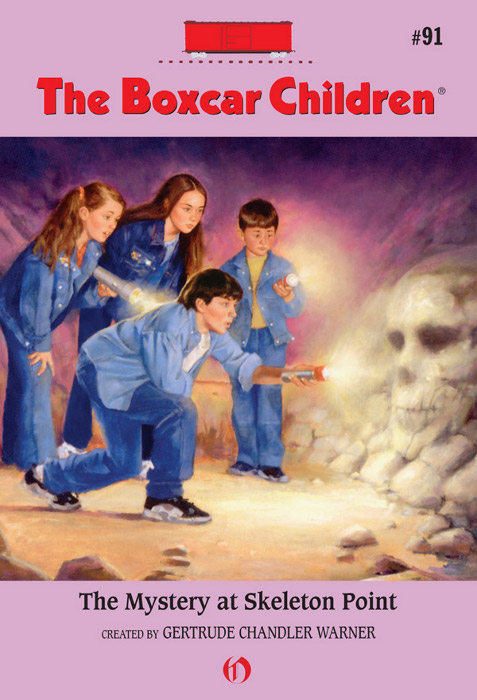 4. The Aldens Have a Dog Day

7. The Secret in the Library

The Alden family loved nothing better than long family car trips. They enjoyed playing games, telling stories and jokes, and having roadside picnics. Even in the car, they kept themselves busy with jobs.

Grandfather Alden’s main job was driving, of course, plus laughing at his grandchildren’s jokes and listening to their plans.

Since twelve-year-old Jessie was the best map reader, her job was to give Grandfather directions.

Benny liked to help Grandfather with directions, too. Now that he was six, Benny could read. His job was to call out the road signs.

“Shady Lake, six miles!” he announced when they passed a sign on their way to visit Grandfather’s cousin Charlotte. “How far is that?”

“Way too far,” fourteen-year-old Henry joked. He had squeezed himself between Benny and their ten-year-old sister, Violet so the two younger children could have the window seats. Henry’s job was to not get twisted into a pretzel while Benny read road signs and Violet wrote in her diary.

“Don’t forget to write a page about the scary house,” Benny reminded his sister.

Now that the family was almost there, Jessie folded up the map and put it away. She unfolded a news clipping and a letter Grandfather’s cousin had sent the week before. “Cousin Charlotte says to watch for a fork in the road right after the general store. There’s a dirt road that goes to Skeleton Point if we want to stop. The other road goes to town.”

“Read the spooky part again,” Benny begged Jessie. “About the skeleton and the statues with no hands near the house at Skeleton Point.”

“I can’t, Benny. I have to watch the road,” Jessie said. “Besides, the article she sent is mainly about her buying Skeleton Point, and some silly things people said about the skeletons that are in the house.”

Grandfather drove slowly, looking for the turnoff. “Back when Charlotte and I were young, a real family lived there, not just skeletons for the medical school,” Grandfather said. “The two of us often rowed across the lake to Skeleton Point. We never did get a good look at the property itself, but now that Charlotte owns it, we will!”

“Why is it called Skeleton Point?” Benny asked.

Grandfather smiled in the rearview mirror. “Some local people used to say there was a burial vault on the property. But it turns out the whole family is buried in the town cemetery. I don’t think there’s any such thing.”

“What about the Walking Skeleton?” Benny asked. “Did you ever see that?”

Grandfather chuckled again. “Oh, that tale is something new — probably just someone pulling a prank. Charlotte said the story has to do with Dr. Tibbs’s skeleton collection. He was the last owner before Charlotte bought the place. He collected skeletons for the medical school. I gather he sometimes put them in the windows to scare off trespassers.”

A few minutes later, Benny forgot all about skeletons when he spotted his favorite kind of road sign: ICE CREAM AHEAD. “Can we stop? Lunch was a long time ago.”

Everyone in the car laughed. For Benny, lunch always seemed like a long time ago.

Grandfather pulled up in front of the Shady Lake General Store. The Aldens got out to stretch their legs.

Violet sniffed the fresh air. “I like that woodsy pine smell. Now I know we’re really on vacation.”

“I like stopping for ice cream,” Benny said. “That’s how
I
know we’re really on vacation.”

The children entered the old store. They made their way past fishing poles, garden rakes, and camping goods. When they came to a freezer fall of homemade ice cream, they lined up behind the other customers who were also waiting for cones.

Nearby, several older men and women sat in a booth. They were playing cards and eating ice cream with long spoons.

While he waited, Benny tried not to stare.

“Well, young fellow, I hope you’re not trying to see what cards I’m holding,” one of the cardplayers said with a twinkle in his eye. “Your eyes are bigger than my ice cream bowl.”

Benny felt his ears get red. “Are you playing Go Fish?” he asked. “That’s what we played in the car when we drove from Greenfield. Only now it’s time for Go Eat Ice Cream, not Go Fish.”

Everyone at the table chuckled.

“I’m getting chocolate ice cream,” Benny continued. “And know what? We’re going to Skeleton Point, Grandfather’s cousin Charlotte bought it — even the skeletons. She asked us to help her fix up the house. We might even get to stay there overnight.”

The players looked up from their cards when they heard this.

“Well,” one silver-haired lady said, “you must be very brave. A lot of strange things have been going on at Skeleton Point ever since Charlotte bought Dr. Tibbs’s old place.”

Another man at the table put his finger to his lips. “Now, don’t go scaring the boy with all that foolish talk about the Walking Skeleton.”

The woman ignored the man. “Well, don’t say we didn’t warn you. I heard from William Mason, who’s working out there, that there’s a skeleton in the house trying to turn into a real person again. If you ask me, that’s why some of those statues have missing parts.”

“Pay no attention,” another cardplayer told Benny. “Everything’s been falling down at Skeleton Point for years, especially those statues. I was glad to hear Charlotte’s going to fix up the place. That’ll stop all this Walking Skeleton nonsense.”

“Maybe the Walking Skeleton is a real person already,” Benny said. “I’m a walking skeleton, too. Only I have muscles on top of my skeleton.”

The cardplayers laughed again and returned to their game.

When the Aldens got their cones, they sat on the front porch of the general store to enjoy their ice cream.

“Where to next?” Grandfather asked when everyone had finished. “As if I didn’t know.”

“Skeleton Point!” the children cried at the same time.

“Skeleton Point it is,” Grandfather said.

Soon he slowed down when he came to a hand-painted sign nailed to a tree. A picture of a skull and words painted in dripping red paint warned, SKELETON POINT — KEEP OUT.

“Does that mean us?” Henry asked.

“Not at all,” Grandfather said. “Charlotte said if we want to take a look at her property, we can go anytime. She keeps the driveway closed off to discourage trespassers. I’ll park down here while you children run up and take a quick look around.”

Violet zipped up her jacket. “See you in a little bit, Grandfather.”

“It’s so quiet,” Benny said in a hushed voice as they walked through the dark, misty woods.

The next moments were not quiet at all, as a burst of barking broke the silence.

A chocolate-brown Labrador retriever, bounded toward the children, gave one last bark, then ran off.

“I’m glad that was just a dog, not the Walking Skeleton!” Benny said as they approached the house.

“Whoa, maybe
that
is!” Henry pointed to a bony figure moving toward the mansion. As they watched, the figure vanished.

The children froze. Jessie and Henry tiptoed toward the house.

“Whoever — or whatever — that was is gone,” Jessie said when she came back for Benny and Violet. “There’s nobody around. Come see the house. It’s a little spooky, but beautiful, too.”

Indeed it was. The children passed an empty reflecting pool full of leaves. On each side stood several moss-covered statues — goddesses, cherubs, angels, even a stone lion. The figures were cracked, and a couple of them were missing arms or hands.

“It’s so sad that they’re all crumbling and ruined,” Violet said when she came closer.

Close up, the stone house wasn’t as big as it looked from a distance. Its long windows and tall doors made it seem larger than it really was.

“The house will be so pretty after it’s fixed up,” Violet said as they walked along the stone porch.

Henry saw something dark hanging off the stone railing. He held up a long black T-shirt painted with a skull on the front and skeleton bones on the back. “What’s this doing here?”

“What are
you
doing here?” a strange voice said from somewhere nearby.

The children heard thrashing again, then a splash in the distance. But no one appeared, and the voice did not speak again.

Henry hung the T-shirt on the railing. “We’ll have to tell Charlotte there’s a trespasser on her property. And that one didn’t sound like a dog.”

Jessie jiggled the doorknobs of several doors, but none of them opened. “I wonder if anyone is inside.” She stopped in front of one of the tall windows. When she tried to speak, no words came out.

“What’s the matter?” Henry took a few more steps and looked inside. There, peering out of the window, was a skeleton! It stood on bony legs and grinned out at the children. “The Walking Skeleton?” Henry said, in a dry whisper. It took him and Jessie a moment to realize that the old skeleton was harmless. “Hmm. Well, it’s certainly not walking anywhere,” Henry said, noticing the wire that held it up.

Finally, Jessie found her voice again. “It must be one of those medical skeletons Grandfather told us about,” she whispered, so the younger children wouldn’t hear. “Let’s show it to Benny and Violet right away so they don’t get a sudden surprise.”

“Good idea,” Henry agreed. “Hey, guys, come over here if you want to see what a complete skeleton looks like. It’s one of the ones Dr. Tibbs must have used to teach students at the medical school.”

Benny and Violet walked over to the window.

“Oooh.” They stared at the skeleton staring back at them.

“Oooh,” an owl — or something that sounded like an owl — echoed in the distance.

Jessie went down the back steps. “Let’s see if this path leads to the lake.”

The children walked along until the path ended on a point overlooking the lake. From there, a set of wooden steps led to a small, sandy beach below. A yellow rowboat bobbed on a dock. 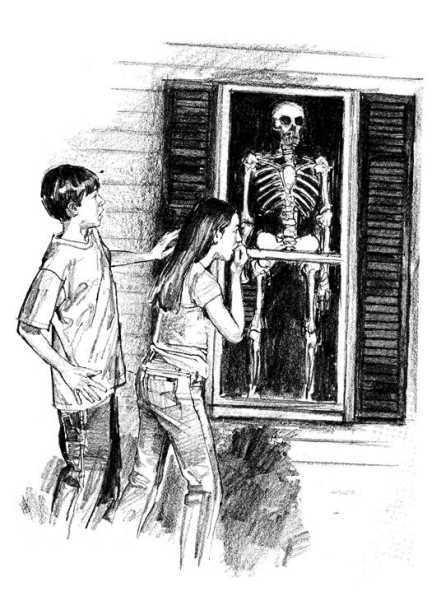 A loud splash broke through the silence.

Something much larger than any duck — and much hairier — broke the surface of the still, foggy lake.

Benny took Jessie’s hand. “What was that?”

The hairy creature disappeared under the water again just as more fog rolled in.

Jessie squeezed Benny’s hand. “Don’t worry, it’s just a swimmer.” But she wasn’t so sure.

The children took one last look at the mist-covered lake, then hurried back to Grandfather and his warm, cozy car.

“Goodness,” Grandfather said when his grandchildren returned from Skeleton Point. You look as if you’ve seen a ghost.”

“Not a ghost, Grandfather — a monster in Shady Lake!”

“Goodness, that must have been quite a fright,” Grandfather said. “What about the Walking Skeleton?”

“We found a skull T-shirt hanging off the porch,” Henry answered. “And one of Dr. Tibbs’s skeletons was hanging in a window, too.”

“You’ll have to tell Charlotte all about your sightings.” Grandfather turned onto the main road and headed to the town of Shady Lake. “She’ll want to hear everything. Here we are.”

Grandfather pulled into the driveway of a snug blue house set behind a garden full of flowers. Cousin Charlotte, who was tall and white-haired like Grandfather, stood in the garden talking with an older man.

When she saw the Aldens’ car pull in, Charlotte quickly came over to the car.