Mystery of the Secret Message 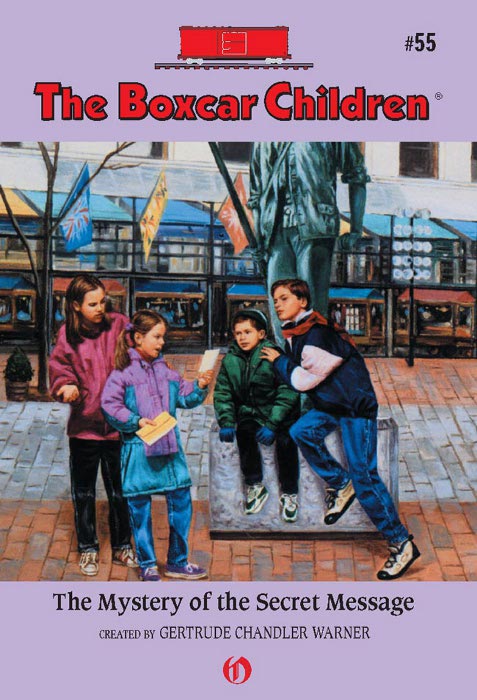 5 The Phantom in the Town Square

10 The Surprise in the Statue

A
pple or pumpkin?” Jessie Alden asked her little brother as they sat in Cooke’s Drugstore reading the menu.

Six-year-old Benny squeezed his eyes shut. It was hard to choose. He liked both kinds of pie. In fact, he liked
all
kinds of pie!

“Me, too,” echoed ten-year-old Violet in her soft voice.

‘I’ll have the same,” Jessie said briskly. An orderly twelve-year-old, she rarely had trouble making up her mind. “What about you, Henry?”

At fourteen, Henry was the oldest of the Alden children. When their parents died years ago, Henry helped care for his younger brother and sisters.

Now Henry studied the other items on the menu. Then he closed the plastic-covered folder and announced, “I’m having something different.”

Benny stared at his older brother. It wasn’t like Henry to order something different from the rest of the Aldens.

“What are you getting?” he asked.

“Apple pie with
ice cream
!” Henry laughed at the surprise on Benny’s face.

Mrs. Turner bustled over to clear away their lunch dishes. “Has anybody left room for dessert?” she asked with a knowing wink.

“Five apple pies,” said Grandfather Alden. “One with a big scoop of vanilla ice cream, if it’s not too much trouble.”

“It’s always a pleasure to wait on the Aldens,” the waitress said with a hearty laugh.

Cooke’s Drugstore was one of Greenfield’s oldest establishments. The Aldens often stopped in for ice cream sundaes and little things like suntan lotion.

On one side of the store was a long lunch counter with red leather stools. The pharmacy counter stood opposite. A big plate glass window looked out on the town square.

“You know,” said Jessie, “this place reminds me of our boxcar.”

“Only our boxcar doesn’t have seats that move,” said Benny, spinning his stool. “Or a milk shake machine.”

“I could make milk shakes and sell them from our boxcar,” Benny said. “The boxcar could be my drugstore.”

“The boxcar can be anything we want it to be,” Violet said.

The Alden children spoke fondly of their old home. After they were orphaned, they moved into an abandoned railroad car. When their grandfather found them, he brought the children and their boxcar to his big Connecticut home.

The boxcar held a place of honor in the backyard. The children played in it when they weren’t off on another exciting adventure with their grandfather.

Mrs. Turner set a tray of apple pies on the counter. “Sorry this took so long,” she said. “But I had to sign for a parcel.” She lowered her voice. “I’ll sure be glad when Mr. Cooke gets back. That substitute knows about medicine, but he doesn’t know much about running this drugstore.”

Jessie watched the substitute druggist measure pills into a bottle. Mr. Kirby was a young man with black, bushy hair and thick eyebrows. His hand shook as he poured, causing the pills to rattle.

“You should see the back room,” said Mrs. Turner. “Looks like a cyclone hit it. Cartons and mail everyplace. Mr. Cooke will have a fit when he sees the mess.”

Grandfather held out his coffee cup for a refill. “I hope John comes back soon from visiting his mother. The Winter Festival is Saturday. Only five days away.”

The waitress shook her head. “I don’t expect Mr. Cooke back anytime soon. His mother is better, but she’s still in the hospital.”

James Alden sighed. “We need every member of the town council. There’s a lot of work to do.”

“I’ll take you up on that offer,” Grandfather said, smiling. “In fact, we’ll start tomorrow. The four of you could clean the Minuteman statue.”

“Okay. The Winter Festival sounds like fun,” Violet said. “I hope everybody comes.”

“That reminds me,” Mrs. Turner said. “Your poster isn’t up.” She called across the room, “Mr. Kirby, did you put up the festival poster?”

The druggist frowned, drawing his bushy brows together. “Mrs. Turner, I have better things to do than hang posters.”

“But the festival is important!” Benny said.

James Alden added, “We’re trying to raise money to make repairs in the town square. It’s a worthy cause.”

Henry spotted a corner of orange card-board beneath a pile of advertising circulars. “Here’s the poster,” he declared. “If you give me some tape, I’ll hang it.”

The waitress handed him a roll of tape. “Put it on the door. That way everybody will see it.”

“I’ll help you, Henry.” Violet slid off her stool and held the poster against the door. Henry secured the corners with tape.

“I hope I win a prize,” Benny said, scraping up the last of his pie.

“I hope we raise a lot of money,” said his grandfather. “Josiah Wade will topple in the middle of the square if we don’t replace his base soon.”

The statue of Josiah Wade had guarded the center of Greenfield Square for as long as anyone could remember. With his musket at his side, the Revolutionary War hero stood staunchly on a base of granite blocks.

“The base
is
crumbling,” Jessie said, looking out the window. “Little pieces of rock have fallen off.”

“After the festival, we’ll have a new base made for the statue,” said Grandfather. “But the town still has to decide whether to move Old Josiah.”

“Why move it?” asked Violet. She liked the statue just where it was. The Minuteman wasn’t very tall — just a little taller than Grandfather — and it was nice to lean against while eating an ice-cream cone.

“Some people would like to repave the square,” answered Grandfather. “And put a fountain where the statue is.”

“Where would the statue go?” Henry asked, returning the roll of tape to Mrs. Turner.

Grandfather shrugged. “That’s another question. But first the town must vote whether or not to move the statue. As director of the festival, I’ll announce the result the day of the festival.”

The ballot box was mounted outside the door of the drugstore. The wooden box had a slot in its hinged lid. Voters slipped ballots into the slot.

“I sent in my ballot,” said Mrs. Turner. “Guess which way I voted.”

Benny swung around on his stool to face her. “You’re not supposed to tell! A vote is secret!”

The other Aldens laughed. Benny was famous for not keeping secrets.

“It’s no secret,” said the waitress. “Both Mr. Cooke and I want to keep old Josiah in the square where he belongs.”

“What about you, Mr. Kirby?” Henry asked the druggist. “What do you think we should do with the statue? Leave it in the square or move it?”

Mr. Kirby said, “I don’t live in this town. So it doesn’t matter to me. I’m only here until Mr. Cooke returns.”

“You can still vote,” Benny told him. He felt everyone should be concerned about the fate of the statue.

Grandfather paid the bill. Then he said to the children, “We’ve got a lot of festival work to do. We’d better get started.”

It was so chilly out that Violet had worn her warm, purple jacket. As they went outside, she put her hands in her jacket pockets. Her fingers touched a scrap of paper.

“My pictures!” she said. “I forgot to pick up my photographs. That’s the main reason we ate lunch at the drugstore.”

Ever since Grandfather gave Violet a camera, she had become the family photographer.

Grandfather handed Violet a ten-dollar bill. “You children go back inside and pick them up. I’m going next door to talk to Miss Pepper about the festival.”

“Back again?” Mrs. Turner said when the Aldens pushed through the door. “Need a refill on pie?”

Benny giggled. “Violet forgot to pick up her pictures.”

Violet went up to the pharmacy counter. “Here’s my ticket, Mr. Kirby.”

Mr. Kirby frowned at the ticket. “Yes, there was a shipment from the photo lab earlier this morning. If I can remember where I put those envelopes — ”

“They’re right where you left them,” Mrs. Turner said. “In the back room on the table.”

Mr. Kirby disappeared into the back and came out again with a white envelope.

“Thank you,” she said. After receiving her change, she hurried outside. Looking at her photos was always an exciting moment. 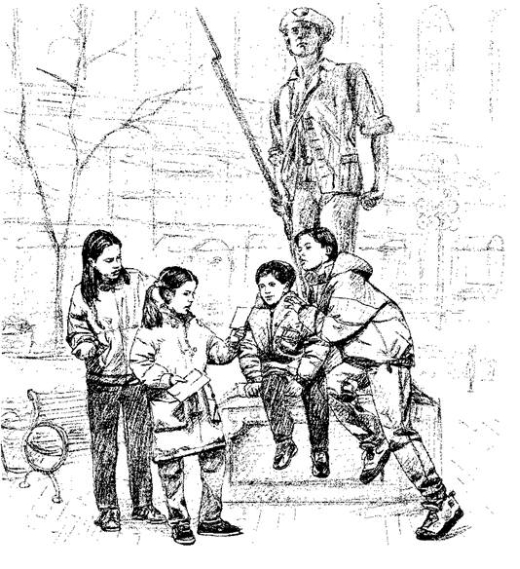 Benny was even more impatient. “Where are the pictures of me?” he asked eagerly, patting Violet on her arm.

“Let’s go over by the statue,” Jessie suggested. “Then we can all look at them.”

They moved to the center of the square. The statue’s base was crumbling, but it was still a good place to sit.

Violet opened the white envelope and thumbed through her photographs.

“This one didn’t turn out.” Violet wrinkled her nose at a picture of Grandfather. She had accidentally cut off his feet in the shot.

Then she came across something that made her gasp.

Violet held up a photograph.

“This isn’t mine,” she said. “I never took this picture.”

T
he others gathered around to see Violet’s mysterious photograph, which was of the town square. In the center was the Minuteman statue.

“Are you sure you didn’t take this?” Jessie asked her sister.

Violet shook her head. “I didn’t take any shots in town.”

Henry pointed to an odd blank space in the upper half of the photograph. The white space cut off the top of Josiah Wade’s upraised musket.

“What happened there?” Henry asked.

Violet knew a little about the developing process. “The film might have been under-exposed,” she replied.

“What does that mean?” asked Benny.

“Something could have been wrong with the film. Or maybe there wasn’t enough light that day. One thing for sure,” Violet added firmly, “this is definitely not my picture.”

“Check and see if you’re missing a picture,” Henry said. “How many were on that roll?”

“Twelve.” Violet quickly counted her stack of photographs. “There are thirteen pictures here, so I’m not missing any.”

“We should take the extra picture back to the drugstore,” Jessie said. “Maybe Mr. Kirby knows who it belongs to.”

Just then Grandfather came out of Sylvia’s Blooms, the florist shop next door to Cooke’s Drugstore. A tall, dark-haired woman walked out with him, talking all the while.

When Grandfather saw the Aldens, he waved them over. 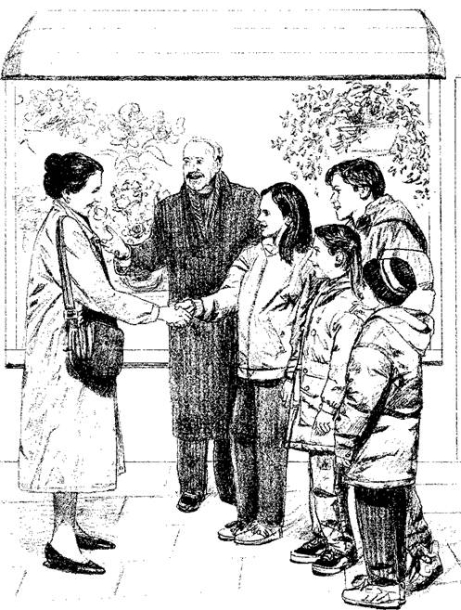 Reckless in Paradise by Trish Morey
A Baked Ham by Jessica Beck
The Dark Side of Disney by Leonard Kinsey
Missing Children by JIN
Wishing on a Star by Deborah Gregory
Invisible by Paul Auster
Star Trek: Vanguard: Storming Heaven by David Mack
Some of Tim's Stories by S. E. Hinton
SAY GOODBYE TO ARCHIE: A Rex Graves Mini-Mystery by Challinor, C.S.
The Filthy Few: A Steve Nastos Mystery by Richard Cain
Our partner