Read Down With the Shine Online

Down With the Shine 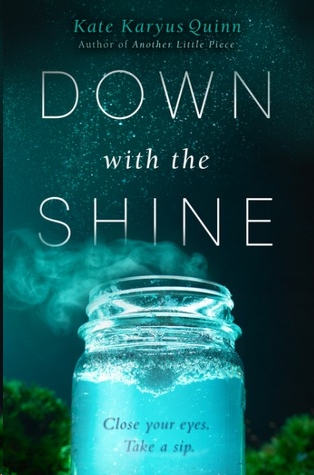 To my mom and dad

“I
gave you my name for a reason, Lennie. It might not be worth much now, but someday, someday real soon, I’m gonna make it so Cash is a name nobody ever forgets. I’m serious, Lennie. People are gonna remember us.”

When I was a little kid, I didn’t get tucked into bed with a story or a song. Instead, I listened to the ravings of my father. The nightly routine ended on my sixth birthday. That was the day he made the nightly news for the first time and they rechristened Leonard Cash the Bad Daddy Bandit.

Over the next two months, Daddy and I crisscrossed the country on a hold-’em-up, shoot-’em-down crime spree. With me in tow, he took down six banks and three toy stores, killing two people who got in the way. He was finally pinned down at a Chuck E. Cheese’s, but managed to escape by taking the guy dressed in the mouse costume
as a hostage. They found me hours later, burrowed deep in the ball pit, still waiting for Daddy’s all-clear whistle.

The only place I’ve seen him since then is on the FBI’s Ten Most Wanted webpage.

That all happened eleven years ago, but it’s not the sort of story people forget. Maybe if I’d become a super-smart honor-student nerd or a chipper rah-rah leadership council type, they’d dwell on it a little less often. But I’m not either of those things, and most people think it’s just a matter of time before my daddy comes back for me and the two of us pick up where we left off at Chuck E. Cheese’s oh so many years ago.

To a stranger, I might look like a typical sullen, angry teenager, but everyone in town knows I’m the furthest thing from typical.

And my famous name is a big part of why, at this exact moment, instead of dividing my time in English class between clock-watching and trying to figure out exactly how those two crazy kids, Romeo and Juliet, managed to mess things up so badly, I’m sitting in the principal’s office while she and a cop give me the “bad blood will tell” glare.

This is the third time I’ve been called down to the office for one of these sessions since my best friend, Dylan, went missing two weeks ago.

The first meeting was more of a “we’re all on the same team” type of chat. That’s when the cops thought Dyl was a runaway. I told them I didn’t know anything, which was half true, and that I hadn’t heard from her, which was totally true. When I left the room, I caught only the slightest hint of “of course the Cash kid is involved with this.”

Things were a little more serious the second time. That was after they found Dylan’s car at a rather infamous bar on the outskirts of town. They asked me if Dylan went there a lot. If I’d ever been there. Mostly they were fishing, waiting for me to slip up. Or at least that was the only reason I could think of for why they never came right out and said anything about the rumors that Leonard Cash had been spotted at this bar more than a few times. Some people even said he might be the owner.

The one thing they didn’t skirt around was the very public fight I’d had with Dylan the day before she disappeared. “I heard you were extremely angry,” my principal, Mrs. Kneeley, said, feigning concern.

“Well, yeah, we were fighting,” I answered, sounding sarcastic and, yes, angry.

A lawyer probably would have told me to keep my mouth shut. But I didn’t have one of those, or anyone else. My mom and her three brothers were my official
guardians, but none of them were the school-meeting type.

Which meant that if Dyl didn’t show up soon, I could see this getting real ugly for me. Still, I insisted I didn’t remember what the fight was about. I was trying to protect Dylan, trying to give her time to do whatever crazy thing she thought she needed to do before they found her and dragged her back home.

In my own way, I was trying to make up for that fight. For saying things I shouldn’t have.

This time, though, I think it may be too late, ’cause the cop and Mrs. Kneeley look dead serious. I know from their expressions that we’re not fucking around anymore.

All dramatic, the cop slams his hand on the table. After getting a good jump out of me, he moves back again, leaving behind a plastic sandwich bag with a piece of paper inside.

The paper is yellowed with age and red with . . .

Not blood. Please not blood.

“You recognize this?” the cop asks. His name is Detective Otto. He’s introduced himself each time we’ve done this, but I still just think of him as “the cop.”

I look past the red smears, to the words.

Yes, I recognize this paper. And I know exactly where they found it.

Actually, it was more like seven years. I’d begged my uncles to let me go, thinking I could spend a week with a bunch of kids who didn’t know me. Of course, the counselors recognized my name and figured everything else out pretty quickly . . . and the gossip trickled down to every kid there. At the end of two weeks, after being caught at the center of the first brawl in Camp Onawanta history, I came home with my official happy camper certificate shoved into my suitcase. It said: Lennie Cash Earned the Following Camp Onawanta Badges: ________. On that line, the camp director had written:
I’m sorry but I don’t think Lennie and Camp Onawanta are a good fit. She will not be allowed back next year
.

I never showed it to my uncles; I just crumpled it up and shoved it under the ripped lining of the suitcase. Now seeing it again, I feel the old shame and embarrassment fill my throat. I want to grab the paper from the cop and rip it to pieces, but he’s already tucking the plastic-enclosed piece of my past into his manila folder.

“Do you know where we found this?” he asks.

I nod. “In my old suitcase. Dylan borrowed it.”

A few weeks before she disappeared, Dyl had discovered the suitcase at the back of my closet, where it had sat
since that disastrous camp experience. She’d declared it “awesomely vintage.” I gifted it to her on the spot.

“Do you know where we found that suitcase?” The cop leans in, his voice hard.

“No.” I whisper the word, suddenly afraid. The red stains. This new urgent, angry tone.

I hadn’t been worried about Dyl before this moment, but maybe that was a mistake. Dylan has always been tough and fearless . . . and reckless. She is exactly the type of person to be stamped with an early expiration date. “Is Dylan in trouble? Did you find her?”

In the moment before he answers, I try to make a deal with God—or whatever it is out there that keeps the world spinning. If Dylan returns in one piece, I’ll destroy my uncles’ distillery and shut down their moonshine-making operation. If I were God, I’d think that was a pretty good deal. My uncles’ moonshine has been the cause of countless troubles and sorrows; seems like nipping it in the bud would save him a whole lot of headaches.

“Yeah, you could say that we found her.” The cop glares at me and too late I figure out he’s one of those people who hates me on principle.

“What do you think?” He pulls out another paper from his folder and again slaps it down in front of me.

This is the moment when God laughs at my stupid little deal. When he tells me where I can shove it.

Because this time a photograph lies on the table in front of me. At first I can’t make sense of the image. The purple plaid of Dyl’s favorite flannel shirt mixed with red red red and then feet and her dyed black hair and a hand . . .

My brain actually refuses to understand exactly what I’m seeing until the cop helpfully adds, “Or most of her anyway.”

“Detective!” Mrs. Kneeley, looking as sick as I feel, reaches past him to flip the photo over and hide it from view.

She’s too late, though. Much too late.

’Cause that’s how I find out that my battered old suitcase, patched up with duct tape and kept closed only with the help of an old leather belt, now holds the butchered remains of my best friend.