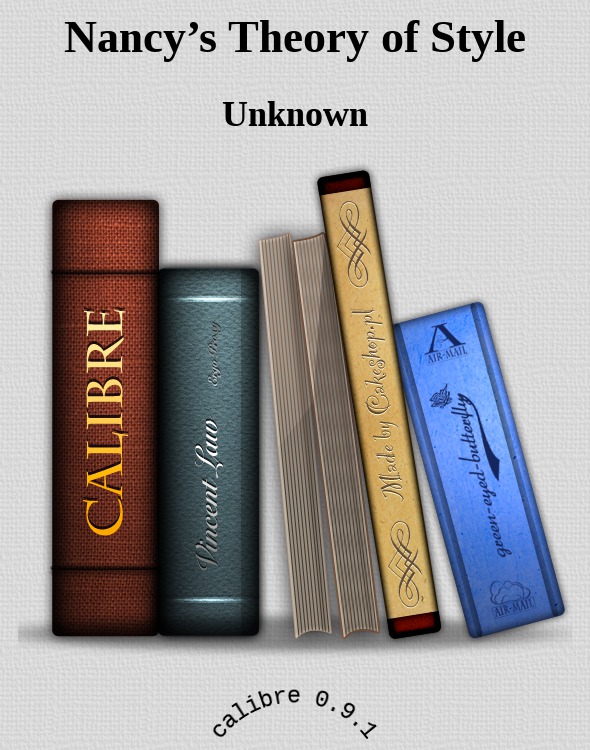 Please don’t
add
this draft to any file sharing sites
or embed in your website without my
permission
.
(Just
email
me if you’d like to ask.

I’ll probably say yes.) I reserve the right
to share my work where and when I choose.

Everyone is welcome to visit my
Scribd
page to download a free
copy and check out my other free reads. Short quotes are acceptable and feel
free to quote
Nancy
’s
fashion edicts, but ask permission for longer quotes.

You have my
permission to share the draft with your friends.

If you enjoy
this draft, visit
Simon
& Schuster’s
website, where you can buy an e-book, read a book club
guide and author interview, and learn about my
Casa Dracula
novels.

Buy the book
from
Amazon
,
Barnes
& Noble
,
IndieBound
,
and other fine retailers.

My
Casa Dracula
novels are:

To Peggy, who is always fabulous, with love

A sweet disorder in the dress
Kindles in clothes a wantonness.
A lawn about the shoulders thrown
Into a fine distraction:
An erring lace, which here and there
Enthralls the crimson stomacher;
A cuff neglectful, and thereby
Ribbons to flow confusedly;
A winning wave, deserving note,
In the tempestuous petticoat;
A careless shoestring, in whose tie
I see a wild civility:
Do more bewitch me than when art
Is too precise in every part.

Chapter 1:
God is in the Details

Nancy Edith Carrington-Chambers was mistress
of all she surveyed: specifically, the lively ground-breaking party on the
expansive lot where her dream house would be built. Each time a guest called
her name, she felt such elation that she thought it was a portent of something
magical. Perhaps with every “
Nancy
!”
an angel got its wings.

These attractive and successful people wanted
her attention because she’d done everything right.

Most people lived messy, disorganized
lives, driven by foolish impulse, and
Nancy
tried not to feel disdainful. Foresight, like having perfect pitch, was a gift.

There was never any question that
Nancy
would marry the
right man, especially since she had the qualities that successful men valued in
a girl: a slim figure, naturally blonde hair, a degree from a prestigious
university, a happy disposition, and a talent for making others believe that
she was listening to them. Successful men would have pursued her even if she
didn’t have a substantial trust fund.

Nancy
had been a freshman when she met Todd
Booth Chambers. She’d been sitting on a bench under a palm tree at a
mid-quarter kegger when she noticed the brawny, laughing junior. One of her
friends saw her looking and said, “Todd Chambers. Kind of cute if you like them
hulky.”

Immediately after learning that Todd was
captain of varsity crew and that his parents were Lewis and Claire Chambers of
Lake Oswego
,
Nancy
had known instinctively that he was the right man for her. She’d begun planning
their future together even as he engaged in a beer-soaked pile up with his frat
brothers.
Nancy
admired manliness in men.

But that was then. Dousing guests with German
lager and wrestling with them on the lawn wouldn’t do here and now, especially
since there was no lawn on the lot that had been scraped raw from a hillside. Ancient
California
live oaks had been ripped out (thanks to a wink-and-a-nod from Todd’s friend on
the city planning commission), leaving a pristine canvas for construction, if
not for a party.

Nancy
had had the contractor haul in a
truckload of sand for a beachy effect. She’d rented banana trees and ordered
huge urns filled with vibrant tropical flowers. White muslin screens hid the
construction equipment from view and white umbrellas shaded seating areas.

Todd had suggested hiring a
videographer, but she’d vetoed that idea on the grounds that people behaved
unnaturally when they were being taped or filmed.

Nancy
wished she had thought of a way to
incorporate mirrors into the décor. She would have enjoyed watching herself
going from friend to friend, laughing in the charming way that she’d practiced,
and touching their shoulders with her graceful left hand, so that everyone
could admire the trio of emerald-cut diamonds on her engagement ring and the platinum
wedding band.

A mirror would have reflected
Nancy
’s honey-gold honeymoon
tan, her golden-honey loose curls, her blue eyes shining with health, and how lithe
and carefree she looked in a simple aqua and white print frock.

It would have shown Todd, impressive in
the blue pin-striped shirt she’d picked out for him. It was unfortunate that
he’d fallen asleep on the private beach in
Tahiti
,
where they’d honeymooned. The skin on his snub nose was raw from her attempt to
exfoliate away his sunburn.

“Nancy,
Nancy
,” her friend and bridesmaid Lizette
called. Lizette’s bleached blonde hair was growing out, revealing a thick
stripe of her natural dark brown hair color along her side part. “This is so
pretty. You look so pretty.”

“I look like a badger,” Lizette said
with a laugh. “I can’t believe you convinced me to color my hair for your
wedding.”

“You looked lovely. All the bridesmaids
were stunning.”

“Thanks to you. Your parties are always
amazing.”

Nancy
smiled, accepting the truthfulness of
the compliment. She’d quit her job and spent a year organizing every aspect of
the wedding and reception. “I’m starting an event planning company, Froth, as
soon as the house is finished.” “Froth, what an excellent name. It will be
perfect like everything you do, like the house will be,” Lizette said with a
roll of her eyes.

Nancy
smiled. “I wanted Maya Lin to design the
house, but she’s only doing public spaces. It took me a while to recover from
that blow, but once I talked to Henrik about vernacular architecture, it was
kismet.”

“He’s Danish. It’s part of my international
plan. I yearn for a French chef, a Thai masseuse, and an English assistant,
quietly homosexual preferably. I’d like a Scottish housekeeper who’s terrifyingly
grim, very Mrs. Danvers of ‘Rebecca,’ and obsessed with me and my exquisite
undergarments.”

“So stunning that I was beside myself,
like a doppelganger. We had a bungalow over the water and could see the fish
through a window on the floor. The water was crystalline and something… Blue is
inadequate to describe the color. It was the color of happiness. Bluepiness,”
Nancy said. “I’m going to have the pool painted the same shade. It will be a
beach-entry pool, so every time we wade into the graduated slope, we’ll
remember our honeymoon.”

“That’s what I mean. You always know the
right details.” Lizette waved her hand to indicate the waiters, in white
wife-beaters, sarongs, and sandals carrying platters of Tahitian-inspired food
and flutes of the same Tattinger that had been served at
Nancy
and Todd’s wedding. “I can figure out a
five-year sales projection, but I can’t organize anything more elaborate than
burgers and the family’s secret potato salad. By the way, the family’s secret
is bacon drippings and sweet pickles.”

“Sales projections and parties both
require precision,”
Nancy
said, although her own experience as a financial analyst almost made her give
up the will to live. “Why don’t you have a weekend soiree at the winery? I’ll
help you.”
Nancy
immediately began imagining romantic strings of lights on the pergola, Italian
love ballads, and a Sunday brunch.

“You would, really? I would be eternally
grateful. I’ll even forgive you for destroying my hair.”

On the off chance that
Nancy
had been having an aural hallucination,
she ignored the voice, but it trilled “Nanny!” again, like a canary in a
coalmine. That is if the canary was personally responsible for sucking the
oxygen out of the mine.

Mobius by Vincent Vale
Between Husbands and Friends by Thayer, Nancy
Complete Works of Wilkie Collins by Wilkie Collins
Woman Who Could Not Forget by Richard Rhodes
10 Real Life Near-Death Experiences in the Press & Media: Global Evidence of the Near-Death by Richard Bullivant
Chosen by the Alien Above Part 4: A Sci-Fi Alien Romance Serial by Nora Lane
Game On (The Game Series) by Carella, A.J.
Hidden Barriers by Sara Shirley
Home Ice by Katie Kenyhercz
The Nowhere Men by Calvin, Michael
Our partner