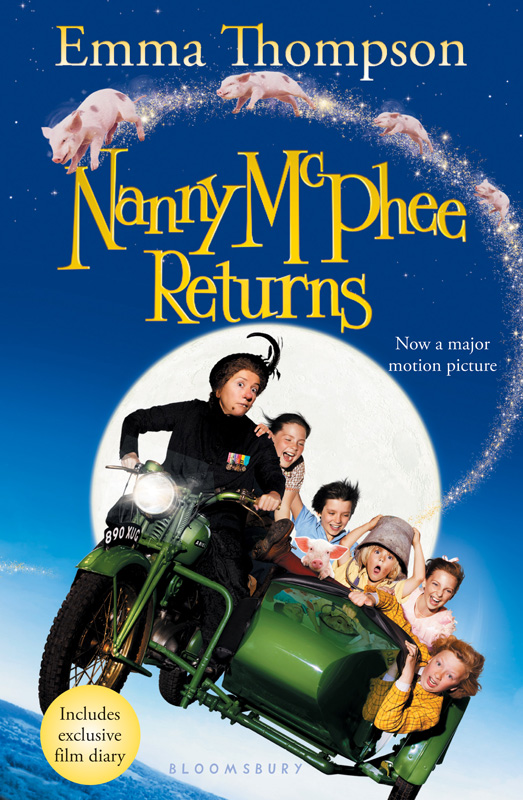 A Warning to the Reader

This is a slightly odd book, being a mixture of story and diary. It is the story of
Nanny McPhee and the Big Bang
and the diary of the filming of the story, all mixed up.

I did not write it like this on purpose – it just happened while I was on the film set and seemed an interesting way to do it. If you get bored with the story you can always just read the diary. And vice versa. Good luck.

We are on the set of Deep Valley Farm and a most magnificent set it is. Months ago, Susanna White (the Director – see Glossary) and Simon Elliott (the Designer – see Glossary) saw this location and decided it was perfect for the story. So Simon drew lots of pictures and hundreds of people worked like stink and now I am sitting in front of a beautiful old farmhouse with a dovecote and outhouses, an original ancient barn and a fascinating garden, which ALL looks as if it has been here for hundreds of years but in fact was only finished last Thursday.

I’m wearing mud-covered snow boots, leggings (ill-advised) and an enormous puffy jacket. I am sitting next to my friend Lindsay Doran, who is producing the film (see Glossary). To our right is the Scratch-O-Matic (see page 17); to my left, the Sound Department (see Glossary). It’s raining and we have had to stop filming.

‘Why is it raining?’ I whine to Lindsay.

‘Because we are shooting this picture in England during the summer,’ says Lindsay. ‘Of course it’s raining.’

Lindsay has produced lots of films in England during the summer and, even though she is American, she understands our weather. Everyone is squelching about, looking depressed, especially Mike Eley, the DP (see– you get the idea). 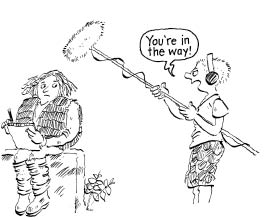 The only thing I can usefully do is to start writing the first chapter of The Story. There’s nothing else to do. Soon I shall also be IN THE WAY. That’s how it always works on a film set. You’re nearly always in the way. But I shall perch here for a minute and begin. The story is called
Nanny McPhee and the Big Bang.
You’ll see why later . . .

Families are weird. You’d think that people who live and eat and sleep in the same place would always have a lot in common. But sometimes they don’t have anything in common AT ALL. You can have a brother who really likes ballet and a sister who thinks it’s girlie. You could probably have Darth Vader and Mickey Mouse in the same family; they’re that weird.

The story I am about to tell you concerns one such family . . .

The grandparents in our story were so posh that they weren’t even called Mr and Mrs. They were called Lord and Lady Carrington. Everyone assumed they were happily married because they behaved terribly well and wore very expensive clothes, but the truth of the matter was that no one really knew because no one had ever seen or heard them talking to each other. They had two daughters called Prunella and Isabel.

Prunella was the eldest and was conceited and vain. All she wanted to do was to go shopping or hunt small animals for the purpose of killing them. Luckily, she is not going to be in our story very much.

All Isabel wanted was to have a real family of her own. By real, she meant a family that had people in it who actually loved each other. When she expressed this one day at breakfast, everyone went very quiet. Lord Carrington coughed, but that was the only response. Like I said, weird.

At any rate, the two sisters and their Very Grand Parents rubbed along like people do even when they haven’t anything to say to each other, until one day there was an Important Garden Party.

Prunella knew exactly what was expected of her. She made a beeline for the richest young lord present and pretended to like everything he liked, even though she wasn’t remotely interested in war machines or maps of seventeenth-century Europe.

Isabel, however, spotted a rather lovely meadow beyond the grounds of the palace where the party was taking place and decided to go and look for moles. Leaving her enormous bonnet under a hydrangea, she hitched up her posh frock and climbed over the wall.

It was a pretty day and Isabel was looking very pretty in it. So when a young farmer by the name of Rory Green came by in his pony and trap and saw her, he fell instantly in love. Impulsive by nature (as anyone who knows anything about the world would already have realised, and, quite frankly, it’s pretty stupid to fall in love with a pretty girl in a pretty frock in a pretty field on a pretty day. Don’t. Find out what she’s like first), he parked the pony and leapt into the field to say hello. The fact is that Isabel was also quite impulsive and, upon seeing the handsome young man leaping over the gate and hailing her with quite the nicest smile she’d ever seen, she went and fell instantly in love too. 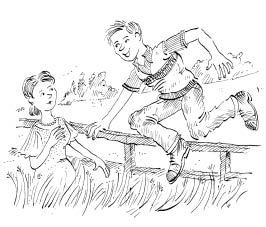 A recipe for disaster, I hear you cry, and under less fortunate circumstances you would be perfectly right. But as luck would have it, Isabel and Rory were not only impulsive but really enjoyed the same things. Things like egg and cress, spiders’ webs after rain, the smell of cow parsley and, surprisingly, early thatching techniques. They realised very quickly that they simply had to get married and have babies together.

You can imagine the reaction.

Poor Prunella, who’d done so well and got engaged to someone she’d soon end up loathing, was completely ignored as Lord and Lady Carrington tried to persuade Isabel that she was delusional and needed six months in a Belgian sanatorium to cure her of her fantasies. There was a lot of sputtering and muttering and cold baths and doctor’s recommendations until finally Isabel got so cheesed off that she packed a small bag and eloped.

Eloping doesn’t much happen any more, but it must have been great fun. What happened was this: you decided you wanted to marry someone, your family all said ‘no’ and threatened to lock you up, upon which you crept out in the middle of the night, got into a pony and trap and galloped to Gretna Green, which is the first bit of Scotland, where you were married by the blacksmith! How exciting is that? What’s more, afterwards the blacksmith re-shod your pony for the journey home.

So that’s what Isabel and Rory did, and of course Lord and Lady Carrington were very cross and, much as you might expect, went and cut her off without a penny. 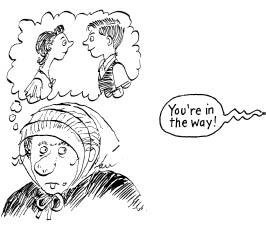 It’s not raining any more but it is rather damp and cold. I am very jealous of Rory and Isabel in their sunny field. Why is the weather always so much better in stories? One of our Other Important Producers (see Glossary) has come to check and see we’re all managing. He’s called Eric and is sometimes very nice to us.

‘Very nice’ meaning that if he thinks we are doing well he says supportive things like ‘It all looks fantastic’ and ‘I can’t believe that’s not real mud’ and ‘Well done’ and ‘Carry on’. But if he thinks we are not doing well he doesn’t say any of that but stomps about looking fierce and saying things like ‘Why haven’t you finished that bit?’ and ‘Hurry up’. It’s all right. That’s his job. 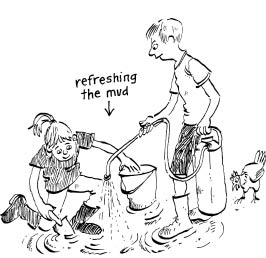 We are on our fifth Set-Up (see Glossary) and it’s only 11.30. That’s not bad going for the first day. Plus, it’s not a normal first day. It’s a first day featuring five children, a cow, some chickens, a goat, two feet of mud everywhere you go, three cameras and 140 crew people. Even Steven Spielberg would go a bit green at the thought. Susanna’s eyes are twinkling even more than usual.

We are all covered with mud from head to toe. But it’s not real mud so it doesn’t feel the same. It’s just as much fun and less smelly. It’s made of sand and water and some chemical beginning with
B
– wait, let me ask one of the Art Department . . . Bentonite, apparently. That means it doesn’t dry up like normal mud. It also means that unlike normal mud, it’s quite scratchy to touch. It makes the most wonderful squelching noises when you walk in it and there is a prize offered for the first person to slip over properly. 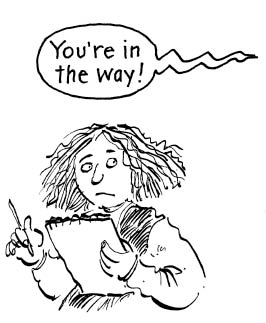 You will, by the way, be appalled to hear that the real Nanny McPhee story hasn’t even started yet. The bit I’ve just told you happened before this story starts. But I think it’s good to know a little about someone’s family, and Isabel is the mum in our story so she’s very important.

I am sitting on a pile of hay.

I am in the Camera Department’s way.

‘What was your last T-stop?’

I don’t know what she’s talking about. But I know it’s not about stopping for tea.

Anyway. Where were we? Oh yes.

Dawn of Night by Kemp, Paul S.
Tricks & Treats: A Romance Anthology by Candace Osmond, Alexis Abbott, Kate Robbins, JJ King, Katherine King, Ian Gillies, Charlene Carr, J. Margot Critch, Kallie Clarke, Kelli Blackwood
The Harp and the Fiddle: Glenncailty Castle, Book 1 by Lila Dubois
The Boy in the Striped Pyjamas by John Boyne
In the Last Analysis by Amanda Cross
Radiance of Tomorrow by Ishmael Beah
Every Last Drop by Charlie Huston
Conflict Of Interest by Gisell DeJesus
The Shrinking Man by Richard Matheson
92 Little Tricks for Big Success in Relationships by How to Talk to Anyone
Our partner