Praise for the novels of Lora Leigh

â€œLeigh draws readers into her stories and takes them on a sensual rol er coaster.â€

â€œLeigh writes wonderful y straightforward and emotional stories with characters that jump off the page.â€

â€œFraught with tension from the first page to the last . . . a love story of the deepest kind with a very emotional and sensual base. Combine al these

elements together and [youâ€™re] guaranteed an intriguing story that wil have you glued to the edge of your seat.â€

â€œBlistering sexuality and eroticism . . . bursting with passion and drama . . . enthral s and excites from beginning to end.â€

â€œA scorcher with sex scenes that blister the pages.â€

â€œMs. Leigh is one of my favorite authors because she creates new worlds that I want to visit and would move to if only I could.â€ 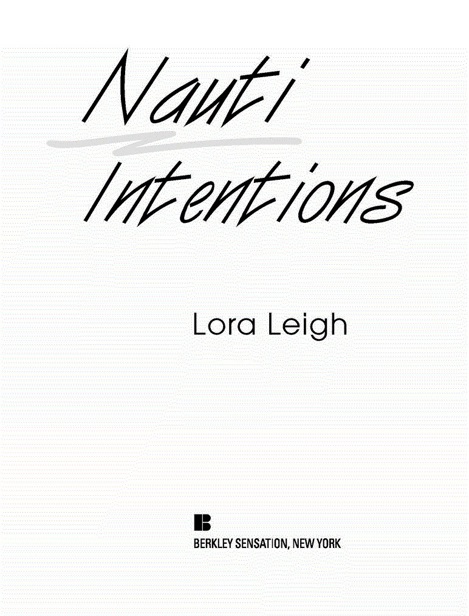 This is a work of fiction. Names, characters, places, and incidents either are the product of the authorâ€™s imagination or are used fictitiously, and any resemblance to actual persons, living or dead, business establishments, events, or locales is entirely coincidental. The publisher does not have any control over and does not assume any responsibility for author or third-party websites or their content.

No part of this book may be reproduced, scanned, or distributed in any printed or electronic form without permission. Please do not participate in or encourage piracy of copyrighted materials in violation of the authorâ€™s rights. Purchase only authorized editions.

BERKLEYÂ® SENSATION and the â€œBâ€ design are trademarks of Penguin Group (USA) Inc.

A special thank-you to Natalie.

You help me keep my sanity,

and thereâ€™s not enough thanks for that.

You go above and beyond and make life easier.

for that knows no bounds.

For everything you do, thank you!

Janey Mackay should have known something was wrong when Dayle Mackay, the man whoâ€™d donated the seed for her conception, left the message

on her cel phone that her brother, Natches, was hurt and she needed to come home.

She should have cal ed someone else, but who was there to cal ? After al , Dayle had made certain Janey was as isolated from the rest of her family as

possible. Private girlsâ€™ schools until col ege, and even then, she knew she was being watched. She was always watched.

She should have been suspicious because Dayle hated Natches, his only son. Hated him so much, and feared him to such an extent that Janey knew it

was the only reason she was in col ege rather than married to one of his fanatical friends. Or dead, because she would have kil ed herself first.

But she hadnâ€™t been. Her only thought had been of Natches, the brother she had never been able to real y get to know, but the one she knew

protected her. She knew, because heâ€™d always managed to get little notes to her through the years. Heâ€™d always found ways to contact her, to let

her know he was there if she needed him.

She had needed him. But it wasnâ€™t a life-or-death need, and she knew if she defied Dayle Mackay and publicly chose Natches over him, then it

would end in blood. Possibly her brotherâ€™s blood.

Her father had her booked on a red-eye flight into Lexington from the col ege in California that heâ€™d had no choice but to al ow her to attend. She

arrived after midnight, and Dayle and her aunt Nadine were waiting on her.

After that, things got a little hazy. But that could have had something to do with the nasty-smel ing cloth Nadine had capped over her mouth and nose

after they were on their way to Somerset. Or the pil s Dayle had shoved down her throat before she could fight him, as her lashes fluttered open later.

Yeah, she had a pretty good idea that was the reason. And she couldnâ€™t seem to clear her mind enough to think. She needed to think. Dayle was a

monster, twisted and evil, and Nadine was his perfect match. His â€œsoul mate,â€ Dayle cal ed his sister.

Janey stared up at the ceiling above the bed her body felt weighted to. She wasnâ€™t tied down, but they hadnâ€™t had to tie her; whatever they had

given her made her so sluggish, made her feel so heavy she couldnâ€™t move. She could feel the tears that fel from her eyes, though she didnâ€™t

Shame twisted inside her, congealed into a sick bal in the pit of her stomach as her skin crawled with the horror of the past hours.

Sheâ€™d always imagined what it would be like if her father did something this vile to herâ€”and yes, there were times she had expected itâ€”and

sheâ€™d imagined she would beg. Cal him â€œDaddyâ€ and plead with him to make it stop.

But the words had choked in her throat. She had stared at the ceiling, hating him, hating her aunt. Hating that bitchâ€™s hands as they touched her.

Her breath hitched on a silent sob. Heâ€™d let that old slut touch her. Heâ€™d laughed with amused indulgence as Nadine had pleaded like a little girl

to have just a â€œlittle fun.â€

As though Janey were a toy. A toy to be used.

Nadine hadnâ€™t had time to do much, but even a little sickened Janey. Sheâ€™d nearly thrown up on the bitch.

She turned her head into the pil ow and tried to dry her tears. She didnâ€™t want Nadine or Dayle to see her crying. To know they had hurt her. It would

only make them worse. They thrived on pain. It amused them. Empowered them.

And she had to stop crying. She had to fight past the blanketing haze that fogged her brain. She needed to just get up. If she could just make herself get

take her to Natches and Natches would make it al go away.

She sobbed at the thought. Alex would take care of her. Maybe heâ€™d even put his arms around her. She would like that. Just for a minute. Just long

enough to make her feel safe. There was something about him, something that warmed her in the dead of night when she was alone and cold.

Another sob broke from her. She swore she could hear Natchesâ€™s voice now. She was hal ucinating. She had to be. Oh God, she had to get out of

here before they gave her more of those damned drugs.

Making her limbs work, making her brain clear enough to force her legs, her arms, to move, had her breaking out in a cold sweat.

but she couldnâ€™t let them hurt him. He had protected her. He was her older brother. And he loved her.

Breathing harshly, sweat pouring along her face, she managed to rol to the side of the bed. The floor looked as though it were miles below her.

She swal owed tightly and blinked the sweat from her eyes. She could do this. She could. If she could rol to the side of the bed, then she could get up

on her damned feet. She could do this.

She forced herself to believe she could do it. It felt as though it took years, but she managed to sit up, swaying, swal owing back the bile in her stomach

as the room spun on her.

She could do this. She could feel her feet on the floor. She struggled to pul her T-shirt down, over her breasts, shuddering at the memory of why it was

Oh man, she was so gonna puke if she had to think about that now.

Janey shook her head, slowly. The fog eased a little. Bracing herself, she forced herself to her feet and went to her knees.

She bit back a moan, panted, and dragged herself up the side of the bed. She stumbled; her ankle nearly col apsed. The door looked so far away. But

she knew it wasnâ€™t. She just had to get there.

Natches. She had to think about Natches. The night Dayle had beaten him, nearly senseless, until he was bloodied and almost unconscious, trying to