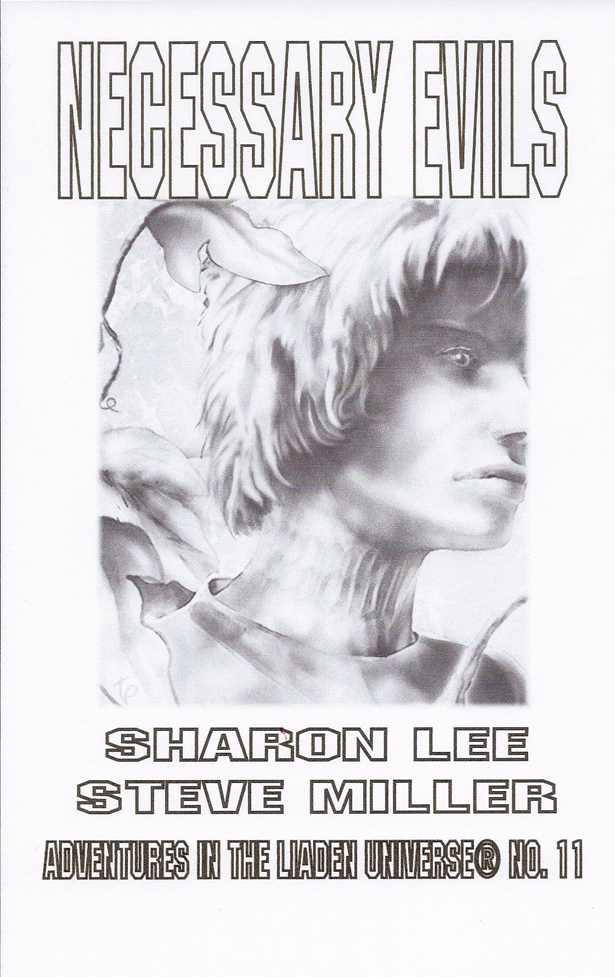 This is a work of fiction. All the characters and events portrayed in this novel are fiction or are used fictitiously.

Copyright © 2005, 2011 by
Sharon Lee
and
Steve Miller
. All rights reserved. No part of this publication may be reproduced or transmitted in any form or by any means, electronic or mechanical, without permission in writing from the author. Please remember that distributing an author's work without permission or payment is theft; and that the authors whose works sell best are those most likely to let us publish more of their works. First published in November 2005 by SRM, Publisher.

Copyediting by Elektra Hammond with layout assistance by Rich Horn, Rolanni, and Kinzel

The front office of Triplanetary Freight Forwarding was empty, which he'd expected, considering. He hadn't called ahead, and they'd only known he was on his way, not when he'd arrive. Which turned out to be just as well, because he hadn't done all that good a job coordinating his arrival with local downtime; the cabbie who'd brought him from the shipyard had spent no energy at all hiding his surprise that any Terran would wander here by himself at this sunless time.

The files . . . the front-office files were in order, up-to-date, and accessible to his code, which --given one thing and another--he hadn't expected. The boss' office, what he supposed he'd be calling
his
office for as long as might be, that was locked, which didn't mean anything except that staff was conscientious.

He used the key he'd been given and stood to one side, shoulder against the wall, hands in the pockets of his leather jacket, while the door slid open and the lights came up in the room beyond.

There not being any immediate hostilities initiated, he eased 'round the wall, hands still in his pockets, and stood just beyond the threshold, taking a long careful look at everything there was to see.

The office was pretty much like he remembered it from his last visit, excusing the lack of clutter obscuring the expensive red wood of the desk, and the sharp, infuriating presence of Lela Toonapple behind it.

"Well, now," he said conversationally, tarrying yet by the door. "Already you've outlasted Replacement Number Three. That ought to ease you."

In fact, it didn't ease him in the least, nor was he a man who usually talked to himself, despite that being a common trait of courier pilots. Replacement Number One had apparently bought his ticket out by congratulating himself aloud upon entering this very office. The sound waves had triggered a razorfall rigged into the ceiling and, hey, presto! Replacement Number One was so much freshly bleeding meat. He fancied he could see a stain of dried blood, dull against the gleaming crimson wood. Fancy only, he assured himself; staff here was efficient, having been trained by Herself, who would never have tolerated bad housekeeping.

According to the reports, Replacement Number Two had gotten herself done within ten planet days by a local bent on revenge, what they called
Balance
hereabouts. Occupational hazard, that was. Or not. He considered himself warned.

And, he acknowledged, finishing his visual scan and stepping into the office, the fact remained that each of the three replacements before him had gone their own road to meet death very soon after planetfall, the only obvious link between them that they'd struck Sector Boss Ailsworth as a threat to his position; enough of a threat that they'd been shuffled out of the high visibility zone and dropped in a place where, apparently, there was no advancement. Hard to know who to blame, there, if anyone-- they'd all accepted the job, after all.

Same, he admitted wryly to himself, shrugging his shoulder pack off and putting it on the desk, as Number Four.

"Nice going, Clarence," he muttered, and pulled his left hand and the bug-finder out of its pocket. He scrutinized the read-out, with its cheery blue lights proclaiming safe-safe-safe, and set it down next to his pack. Sighing, he slipped the gun out of his right pocket, snapped the safety on and put it decently away into its holster.

The temp was set a little low for his liking, so he kept the jacket on as he pulled the chair into a comfortable spot before sitting, adjusted the armrests so he wouldn't bang his elbows too hard because he knew he was one that used his armrests-- ergonomics be damned--and bent over to bring the comp on-line.

First file up was addressed to him. A roster it was, listing names and contact numbers for staff, couriers, day labor and such. It also gave the address and contact codes for the round-the-clock office, whose work he'd seriously not wished to impinge upon as his first act on planet. The second file was something else. He frowned, scanned through, then went back to the top, one hand already reaching for the desk-comm.

"This is O'Berin," Clarence told her, firm and quiet. "Contact staff and let 'em know there's a meeting at headquarters when the port goes dayside. I want everybody here, sharp and ready to work."

"Everybody," Clarence confirmed, letting her hear a touch of impatience.

"Bring yourself here an hour before the others. I fancy I'll be having some questions for you."

She drew a breath, slow and not quite steady.

"Questions," he said to that minor sound of dread. "You can expect from me what you had from Herself, for the same cause and reasons. Fair?"

Out the breath came, stronger. "
Yes
, sir," she whispered.

"Tomorrow, then. O'Berin out." He cut the connection and turned back to the screen and its tangled skein of news. It was going to be a long night.

Sighing, he peeled out of his jacket and adjusted the gain on the screen. He checked to make sure the telltales would talk to him in case anyone unexpected--which was just about anyone at all--tested the defenses, and reached automatically for the cup still likely sitting on his desk at Landofar.

He should've asked Belle to bring along coffee tomorrow, he thought, ruefully, if there was coffee to be had. Well, and it would be inneresting to see, as Herself would have had it, what Belle might think of on her own.

"Of your considerable goodness." Chi yos'Phelium held out her cup with a smile.

He served her, and then himself, replacing the pot on the warmer. They shared a late breakfast on the patio overlooking the so-called wilderness. To Daav's eye, and no doubt to his mother's, the well-grown and cared for strip of trees looked rather overly domesticated. No matter, the view was pleasant, and if it were somewhat tame, at least they could be assured that no wild animals, nor wild men, for that matter, would come roaring down upon them to smash up the porcelain and make all untidy.

"Really, Daav," his mother murmured as she took her cup in hand, "you have become extremely useful. I wonder that I allow you to return to the Scouts."

He sipped his own tea, outwardly unperturbed. "Surely, ma'am, you must know that my usefulness is directly attributable to the knowledge that I am not long for Liad. Were you to deny me the Scouts, I make no doubt that I should soon revert to the surly fellow we both know me to be."

"It is true," Chi said, as if the thought had just occurred to her, "that you are far from sweet-tempered, my son. Doubtless you are correct, and I would tire of your company in a few days under such changed circumstance." She put her cup, gently, on the table. "Well, then, back to the Scouts you shall go, when your leave is done." She shot him a quick, mischievous glance from beneath thick golden lashes. "Now, own yourself relieved, sir!"

"Reprieved!" he exclaimed in obligingly melodramatic tones. "So near it was that my heart fair stuttered in my breast, and very nearly was I unmanned! Yet, Doom stayed her fair hand, and turned her face aside. Surely, I am the most fortunate of men!"

His mother laughed, and brought her hands together in a Terran clap of appreciation. "Well-played, sir! Truly, Daav, you should have sought the stage, rather than the Scouts."

"A traveling troupe, ma'am?" he asked her, and she sent him another glance, this one sharp and serious.

"You will need to come to terms at some point," she commented. "I will say no more, other than to note that the point grows nearer, not more distant."

That this was undoubtedly true did nothing to ease Daav's feelings regarding the matter of his recent ascent to nadelm, the heir in fact to the delm. His mother advised him that he would, in time, grow accustomed to his rank and, when duty required it of him, to a life lived primarily on Liad.

"I wonder, my son," his mother said, selecting a fruit from the bowl between them, "if you might dispatch a small errand for me at the Low Port."

Daav blinked, and sent her a look, half-expecting to meet more mischief in her face, though her voice had been serious enough.

The glance he met was likewise serious.

"At the Low Port, ma'am?" he repeated, neutrally.

His mother considered him blandly. "Quite a small thing, really, Daav. If you would be so good."