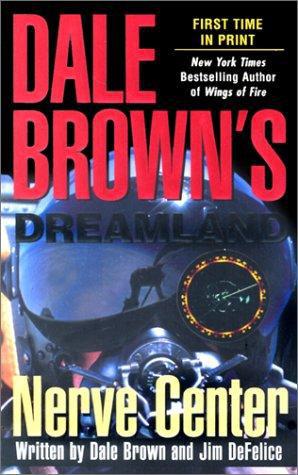 Once one of the country’s elite fighter jocks, now Dog is whipping Dreamland into shape the only way he knows how—with blood, sweat, and tears—and proving that his bite is just as bad as his bark. …

Like father, like daughter. Breanna is brash, quick-witted, and one of the best test pilots at Dreamland. But she wasn’t prepared for the biggest test of her life: a crash that grounded her husband in more ways than one. …

A top fighter pilot until a crash at Dreamland left him paraplegic. Now, Zen is at the helm of the ambitious Flighthawk program, piloting the hypersonic remote-controlled aircraft from the seat of his wheelchair—and watching what’s left of his marriage crash and burn. …

A top gun with an attitude to match. Knife had a MiG killed in the Gulf War—and won’t let anyone forget it. Though resentful that his campaign to head Dreamland stalled, Knife’s the guy you want on your wing when the bogies start biting. …

A woman in a man’s world, Cheshire has more than proven herself as the Megafortress’s senior project officer. But when Dog comes to town, Cheshire must stake out her territory once again—or watch the Megafortress project go down in flames. …

Freah made a name for himself by heading a daring rescue of a U-2 pilot in Iraq. Now, at the ripe old age of twenty-three, Freah’s constantly under fire, as commander of the top-secret “Whiplash” rescue and support team—and Dog’s right-hand man… 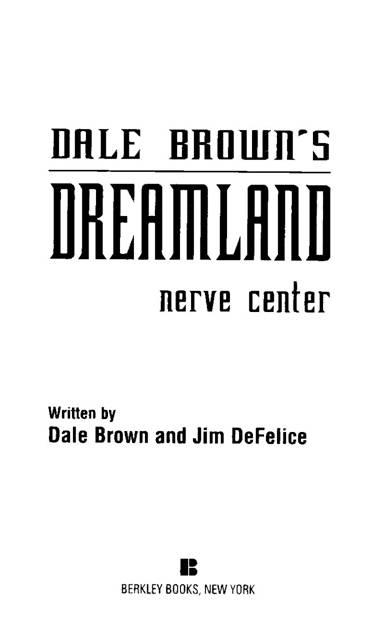 This is a work of fiction. Names, characters, places, and incidents either
are the product of the author’s imagination or are used fictitiously,
and any resemblance to actual persons, living or dead, business
establishments, events, or locales is entirely coincidental.

A Berkley Book / published by arrangement with
the author

This book, or parts thereof, may not be reproduced in
any form without permission.
For information address: The Berkley Publishing Group,
a division of Penguin Putnam Inc.,
375 Hudson Street, New York, New York 10014.

USUALLY THE NIGHTMARES WERE ABOUT LOSING HIS legs.

Jeff “Zen” Stockard felt the jerk of the ejection seat as the planes collided, or saw the fireball that had seared into his brain. Sometimes the nightmares didn’t replay anything that had really happened the day his spine was crushed; they were subtle in their horror, teasing his fear. He might sit in an empty room, watching while everyone else got up to leave, wondering why he couldn’t move. Or he’d be in a bathtub, surrounded by an immense blue sea, bobbing as the swells turned to waves.

But tonight’s nightmare had nothing to do with his legs. Tonight, the first night of the new year, a sun rose from the middle of his head, a sun of chromium red. Its glow burned holes in the void around him. A black core appeared in the middle of this sun, a whirlpool of force and gravity that grabbed back the rays, grabbed back his brain. Zen’s body was pulled from the inside out toward the void, his bones and the muscles and the skin sucked into the vortex. And then his soul itself was consumed by magenta fire.

Zen shouted. His wife, Breanna, rolled next to him on the bed.

He didn’t hear her until she repeated the question a third time.

She mumbled something, shifting next to him in the bed. Jeff stared at the ceiling of their condominium bedroom, noticing as if for the first time the soft red glow from the alarm clock numerals. The red reminded him of the color of his flesh when it burned in the dream.

But as he stared, he realized the clock had nothing to do with the dream. The nightmare hadn’t come from anything here, nor had it been seeded by his accident.

It had come from ANTARES, the computer-mind interface experiments that taught him to control a robot plane with his thoughts. The sun was part of the metaphor he used to go into Theta-alpha, the mental state where he could interface with the computer.

It had ended long ago. Anything from before the accident was long ago, but ANTARES seemed even further in the past, distant history for him and the rest of Dreamland, even though the program had only been officially shut down six months ago.

Breanna leaned over him. Stale perfume and smoke from the party they’d been to earlier wafted across his face; her breath carried the overly sweet scent of her last glass of Chardonnay.

She ran her fingers across his forehead and down his cheek, obviously thinking he’d had a nightmare about his legs. With her touch she tried to console him for the inconsolable, sympathizing with him for something that couldn’t be sympathized for. He took her hand gently, placing it back on her side.

He closed his eyes and listened to the sound of her heart in the still room, the light, steady rhythm pulling him back to rest.

THE HELICOPTERS KEPT GETTING IN THE WAY. ZEN barely kept his U/MF-3 from colliding with a Blackhawk, mashing his control stick left and flailing away at the last possible instant. He was so close to the helicopter’s blades that the wash whipped his wings into a nearly uncontrollable spin, despite the computer’s efforts to help him steady the plane.

Before he could fully recover, he found himself in the middle of a stream of lead, thrown by the two ZSU-23 antiaircraft guns he was assigned to hit. Fortunately, the guns were being sighted manually and the gunners couldn’t keep up with Zen’s hard zag back to the right. But the sharp maneuvers made it impossible for him to lock on his target. Zen pressed the trigger as the four-barreled mobile antiaircraft unit on the left slid through his targeting pipper, while he simultaneously tried to walk his Flighthawk back into the target by sticking his rudder with a quick jerk left. That might have worked—might have—in a plane like an A- 10A Thunderbolt, built for low-speed, low-level target-thrashing. But the U/MF-3 Flighthawk was a different beast altogether, originally designed for high-altitude, high-Mach encounters.

Not that she couldn’t fly down here in the mud. Just that she didn’t necessarily appreciate it. Zen found himself fighting for control as the small craft jerked herself right and left, shells bursting from beneath her belly as she tried to follow his commands. The spin had taken him too low, and his cannon fire had slowed him down. The unmanned aircraft was in serious danger of turning into a brick.

Stubbornly, Zen ignored the computerized voice that warned of an impending stall. He goosed off enough slugs to nail the flak-dealer, then tossed off a few prayers to get the Flighthawk’s nose pointing skyward. The antiaircraft gun exploded with a brilliant crimson glow just as the assault leader announced that the helos were on the ground.

But before Zen could draw a breath to relax, the radar-warning receiver in the lead Flighthawk went berserk, screaming that an enemy fighter had somehow gotten close enough to launch AMRAAM air-to-air missiles at the helicopters Zen was supposed to be protecting.

MAJOR MACK “KNIFE” SMITH GRINNED AS HE POPPED his F-16 up over the mountains he’d been using to mask his approach. He’d snuck in behind the two fighters tasked to keep him at bay; the four helicopters carrying the enemy assault force floated naked in front of him. Four helicopters, four missiles, four turkeys ready to be gassed.

A quartet of AMRAAMS slid off his wings in quick succession. Preset for the encounter, the missiles turned on their active seekers, each homing in on their targets as their solid-fuel rockets burst them forward at speeds approaching Mach 4. It was overkill really—the helicopters were less than five miles away; the missiles barely lit their wicks before nailing their targets. The helos were history before their pilots even realized they were targeted.

Mack didn’t have time to gloat. One of the helicopters’ escorts flashed for his tail. Its pilot—Jeff Stockard—had been caught with his pants down, and now he wanted revenge.

Of course, the fact that he didn’t have time to gloat did not actually mean that Knife wouldn’t gloat. On the contrary—he flicked on his mike and gave a roar of laughter as he took his Viper into a nearly ninety-degree turn, pulling close to thirteen g’s. The “stock” plane would quite possibly have rattled apart; Knife most certainly would have blacked out from the force of gravity pelting his body. But nothing at the Air Force High Technology Advanced Weapons Center—aka “Dreamland”—was stock. The F-16’s forward canards and reshaped delta wings were fashioned from an experimental titanium-carbon combination that made them several times stronger than the ones the factory had first outfitted her with. Mack’s flight suit was designed to keep blood flowing evenly throughout his body at fifteen g’s, negative as well as positive.

It couldn’t keep his heart from double-pumping as he took the turn and managed to get his pursuer in his sights. He got off a half-second slap shot as the enemy zigged downward. The odds against hitting the small, nimble U/MF fighter were at least a hundred to one, but he got close enough to force the SOB to break downward, keeping it an easy target for the F-16. Knife laughed so loud his helmet almost came off—he hadn’t had this much fun in months.

ZEN WORKED HARD NOW. HIS BREATH GREW SHORT and the muscles in his shoulders hardened into cannonballs as he tried desperately to break his airplane out of the low-energy scissors he’d been tricked into.

Not tricked exactly. He’d blundered into it, failing to use his airplane properly. Failing to use his head—truth was, he’d been surprised twice in the space of ninety seconds. He was stuck now in a three-dimensional game of follow-the-leader where being the leader meant you had a fifty- or sixty-percent chance of landing in the other guy’s gunsight.

The pursuer had to be careful not to be sucked into a turn or even a loop that would send his plane shooting ahead, effectively changing places. This was a real danger since the U/MF could turn tighter than even the high-maneuverability F-16 Knife was flying. Mack was no sucker, nor a fool, hanging back just far enough to stay with him, but still close enough to cut off any fancy stuff with gunfire.

Zen had three other Flighthawks hurrying to his rescue. Eventually, they’d force Mack to break off, turning the tables on the hunter. But eventually seemed to be taking forever.