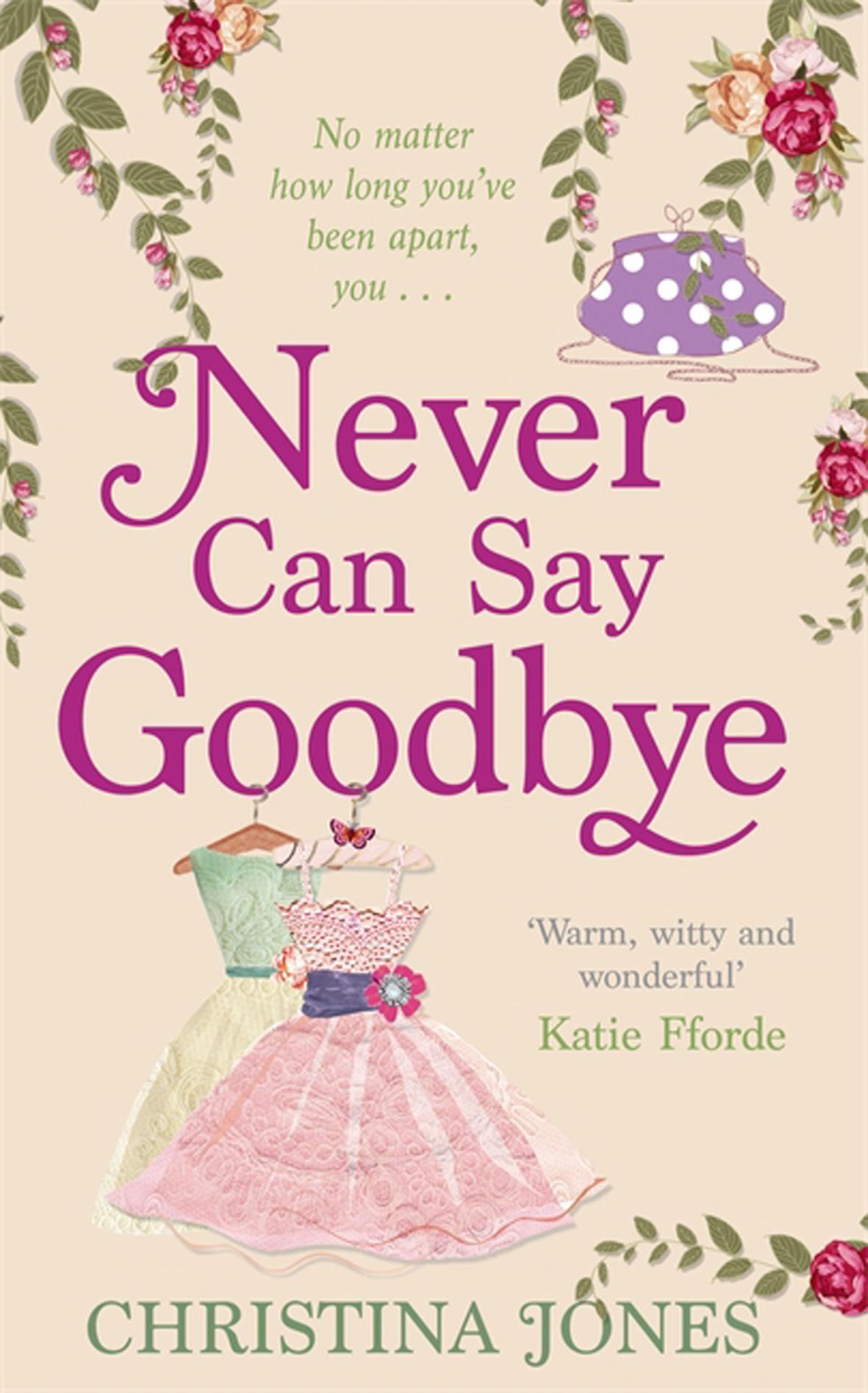 The Way to a Woman’s Heart

For The Toyboy Trucker, Elle and The Doctor
with all my love

With many thanks to Broo Doherty, my agent, and Emma Beswetherick, my editor, for not even trying to talk me out of writing
this book.

And with thanks to Linda, whose pendant-twirling in the pub gave me the idea in the first place.

‘ … and to Francesca Angelina Maud Meredith, I bequeath my—’

‘Hang on, Rita,’ Frankie Meredith, perched on the wide and highly polished wooden counter of Rita’s Rent-a-Frock shop, interrupted.
‘I think I might have spotted a teensy bit of a flaw there.’

‘Really?’ Rita, Frankie’s middle-aged friend and employer, salsa’d between the claustrophobically crammed clothes rails in
a too-tight, too-short, scarlet silk flamenco dress. ‘And what’s that, then?’

‘You can’t bequeath me anything. You’re not dead.’

‘Well spotted, love. No flies on you.’ Short and stocky, Rita gave a wobbly mock-curtsy. ‘But actually, not being dead doesn’t
come into it.’

‘Doesn’t it? I’d always thought being dead was a vital part of bequeathing. And are we adding that dress to the shop or are
you buying it?’

Rita smoothed down the riotous ripples of scarlet silk.
‘Sadly, much as I love it, under the circumstances, once it’s been cleaned it’ll have to go into the stock. I’m trying to
rid myself of clutter – hence the bequeathing. And even though it’s a very beautiful frock, it’s just a tad too tight.’

Diplomatically, Frankie said nothing. The dress, donated by one of Kingston Dapple’s ladies-who-lunch, was probably a small
size twelve, and Rita certainly wasn’t.

Rita’s Rent-a-Frock was warmly cosy on this cold, grey, autumnal afternoon, and Rita was indulging in her favourite pastime
of trying on newly donated dresses to while away the customer-free moments. The fictional bequest-making, Frankie assumed,
was a new game invented for much the same reason.

‘Anyway,’ Rita continued, fluffing at her heavily hennaed hair, ‘with me being a titian, red’s not really me, is it? Red’s
more your colour. You can get away with red seeing as you’re dark and dramatic and look exactly like Joan Rivers.’

‘You do, love. You know you do. Loads of people have said so.’

‘Have they? Lord … Well, OK, she’s very glam, but she’s also about four decades older than me, and blonde, and with an American
accent, not to mention a caustic turn of phrase. I’m not sure we’re that similar, actually, are we?’

‘Maybe you’re not, then.’ Rita looked doubtful. ‘You know me and names … P’raps it’s not Joan Rivers. Maybe I mean Joan Collins,
do I?’

‘Claudia Winkleman?’ Frankie said hopefully. The vague similarity had been mentioned rather flatteringly before. Especially
the hair.

‘Who?’ Rita shook her head. ‘No, definitely not him. You look like a famous
Joan
. Brian from the kebab van always says so.’

Frankie laughed. Brian from the kebab van said a lot of things. Most of them wrong.

‘Brian says,’ Rita continued, ‘you look like that black-haired rock ’n’ roll woman who looks like Alice Cooper only much prettier
and with a heavy fringe and more make-up and—’

‘You mean Joan
Jett
?’ Frankie sighed. ‘Oh, I wish … OK, our hair is much the same and there’s a bit of a physical resemblance, but I’d look terrible
in leather – and you’d have to add gangly and gawky for a fuller and truer description of me.’

‘So you’re tall and a bit on the skinny side. So are the best-paid catwalk models and you don’t hear them complaining, do
you? And don’t knock that retro rock chick look, love. It’s refreshing in these days of WAG-orange clones. That hairstyle
and your panda eyes will make a comeback soon, you wait and see.’

‘What I mean is,’ Rita said, ‘when it all comes round again, as it will, you’ll be way ahead of the trend. Until then, you
have a unique, um, style all of your own. Joan Jett dressed by Barbie.’

‘I’m not sure that’s even a compliment, now,’ Frankie laughed. ‘I just seemed to drift into the primary-coloured, flouncy,
girlie look early on. It must have been an amalgam of all those Goths and New Romantics when I was growing up … they were
so glamorous to a plain Jane like me. As an
eighties child, I’m only surprised I wasn’t born with a fixation for
Dallas
-type shoulder pads too.’

‘Shoulder pads!’ Rita clapped her plump hands. ‘Oh, I loved them! They gave a girl balance and style. We don’t get enough
of them in here, do we? I loved the eighties. Like you say, such amazing outfits. And all that
Dallas
stuff too – huge hair and glossy lippy and skyscraper heels and big, big bling – it was a fabulous decade for fashion.’

Frankie smiled. Rita thought every decade had been a fabulous decade for fashion. It was a shame that Rent-a-Frock didn’t
reflect her passion.

Rent-a-Frock was more like a haphazard Saturday jumble sale in the Kingston Dapple scout hut. Rita never turned anything wearable
away. She accepted any item of clothing anyone brought in, with the result that everything was crammed in everywhere with
no regard for style or era or colour or even size.

‘Anyway,’ Frankie said, ‘what did you mean earlier by “under the circumstances” and decluttering? Are you having a life-laundry
moment? Is that what the bequeathing is about?’

‘OK.’ Frankie settled herself more comfortably on the wide counter. They weren’t busy; the shop had been empty all afternoon.
‘I’m all for a new game.’

‘It’s-not-a-game.’ With a further swish of red silk, Rita continued her stumpy dancing round the rainbow-crammed rails. ‘Right,
where was I?’

‘You were making bequests. So far, you’d apparently left all your shoes to Maisie Fairbrother and your Mantovani vinyl record
collection to Twilights Rest Home.’

‘Maisie Fairbrother has always been the Imelda Marcos of Kingston Dapple and a good friend even if she’s a bit, well, odd
and has never set foot inside this shop.’ Rita twirled round a box of mixed gloves and socks. ‘And Twilights have tea dances
every Friday afternoon and must get tired of foxtrotting to the same old music. So, that’s two bequests satisfactorily made.
Now … ’

Frankie leaned forwards. ‘Once you’ve made all your bequests, can I start on mine? Not that I’ve got much to show for someone
who’s very nearly thirty. Half a very small rented house complete with ditzy flatmate, fourteen shelves of books – all paperback
chick lit, not an improving literary tome in sight – a very small telly, an ancient DVD player, an even more ancient sound
system, a laptop, one stack of rom-com films, three cases of girlie CDs, a wardrobe of second-hand dresses, a much-loved but
moth-eaten teddy bear … ’

‘Frankie.’ Rita stopped shimmying. ‘Are you going to listen to me or not?’

‘Yes, OK.’ Frankie grinned, unabashed. ‘It’s not like we’re snowed under with customers, is it?’

‘Hardly going to be are we?’ Rita glared at the relentless rain lashing across Kingston Dapple’s deserted market place and
hammering against the shop’s 1950s windows from a pewter sky. ‘Early November – terrible time for us. Always has been. In
a couple of weeks’ time, once you get towards December, now that’s when you’ll be really busy, when everyone wants a new party
frock for Christmas, ditto New Year’s Eve, and then on into the post-festive diet period when no one wants to spend a fortune
on new dresses while they’re between sizes, and then the spring weddings and … ’

Frankie scrunched up the layers of her purple wool skirt and drew her black-opaque-tighted knees up to her chin. ‘Mmm,
I’ve been working here for three years – I do know the trading pattern – but you just said “you” there a lot. “You”. Singular.
Not “we” … You’re being weird.’

‘Because,’ Rita said, executing a twirl, ‘that’s what I’m trying to tell you. I’m making the bequests – getting rid of everything
I no longer need – because I won’t be here in December.’

‘Good Lord, no. I’m as fit as a fiddle. Now, if you’d just stop interrupting and let me do this before we get sidetracked
again. To Francesca Angelina Maud Meredith, I bequeath my shop … ’

‘
What?
’ Frankie clutched the counter. ‘Are you mad?’

‘Not as far as I know, love. So, listen. Rita’s Rent-a-Frock will be closed down and renamed Francesca’s Fabulous Frocks next
week. I’ll be gone, and you will be the sole proprietor from next weekend.’

Frankie gawped. ‘Are you joking? You are joking, right?’

‘Wrong, and don’t gawp, love. You’re a pretty girl, but it’s still not a good look.’

‘About not being here and bequeathing me the shop.’

‘Die?’ Rita chuckled. ‘Goodness me, I hope not. At least not for another eighty-odd years. No, as I’ve just told you, I’m
as fit as a lop. Well, a few pounds overweight maybe, but otherwise I’ve just passed my MOT with flying colours.’

‘Thank goodness for that.’ Frankie heaved a massive sigh of
relief. ‘But please stop messing about. You can’t give me the shop – even in a game.’

‘For the umpteenth time, it’s not a game and yes, I can. And as I won’t be here for much longer, it seems eminently sensible
to tie up all the ends now and—’

‘Stop, please. This is just too bizarre for words. And what do you mean you won’t be here for much longer?’ Frankie gulped.
‘That sounds really awful. Rita, you’re honestly OK, aren’t you?’

‘Never better. Now, do you want to hear about your future or not?’

‘Well, yes, of course, if you’re being serious.’

‘I’m being very serious. About my future – and yours.’ Frankie shook her head. ‘OK, but to be honest, I didn’t think I’d got
one. I’ve been worrying for ages that you were going to make me redundant after Christmas. After all, a second-hand rental
clothes shop in a Berkshire village trading badly in the teeth of this ongoing recession can hardly justify two members of
staff, and now—’

‘All gloom and doom.’ Rita sniffed. ‘You’ll be fine. Secondhand clothes always do well when money’s tight. I’m relying on
you to carry on where I left off – and then some. I know you’ll make a success of it.’

‘But, why are you giving up the business? You love it. It’s your life. You can’t—’