Frozen in the doorway, his mind could not make his body move.

He didn't hear James. The cross at the far side of the room dominated his vision.

“Carl, look at me.” The command was sharp and he focused on James’ face. “I am the Dom here, not Zack. I know your body better and your limitations. You're afraid, but I won't let your fears take the joy out of what we do. Strip!”

The bark of the order compelled Carl to obey. As he abandoned the hearts and flowers on the floor, the symbolism was not lost on him. No hugs and kisses, no sweet words of love, no gentle caresses, no...

“Carl. You're breathing too fast. Concentrate on me. Breathe with me.”

They simply breathed. In and out until he calmed and could let his rational mind tell him that James was not Zachary. He could rely on James to take care of him.

Carl looked at him and saw the concern in his eyes. “I will be okay, sir.”

“Of course you will. I'll see to it.” The affront in James’ voice made him smile.

“I'm sorry, sir. I knew I was nervous, but I had no idea this was going to happen.”

“Don't be sorry for an honest reaction, Carl. We'll try something different tonight so you have less restriction.” James brought two big rings from the cabinet and attached them to the smaller rings at the top of the St. Andrew's cross. “Come here. Carl.”

Trust was the reason he could walk to the cross and stand quietly while James wrapped the bottom cuffs to his ankles. He tried not to be too obvious in his relief that James did not buckle them.

“Take hold of the rings and don't let go unless I tell you to.” James guided his hands to the rings. “What is your safeword?”

“Good. I am going to punish you for leaving after the argument. How many hits do you think that should be?”

The trembling started in his limbs and traveled through him until the rings on all four points of the cross rattled. “What are you going to use, sir?”

“I think I deserve at least a dozen, sir.”

Carl's cock stirred in spite of his fear as he answered his Dom. “I want to feel the burn, sir. I need to.”

“I know you do. Twelve it is. You may not come, though. Not tonight, am I clear?”

“Yes sir.” The first smack to his ass surprised him and he yelped. “Holy hell!”

Well, he asked for it. Twelve open-handed spanks burned all right. The cheeks of his butt were hot enough to fry eggs when James finished with him, yet the trembling had stopped. He hurt, but he was no longer afraid. To the contrary, he was aroused to the point that his dick was as hot as his ass.

James whispered in his ear. “We are done and you took the punishment beautifully, Carl. I am going to release your feet and then you may let go of the rings and step back.”

When the cuffs were gone, he opened his hands slowly. He'd gripped the rings so tight his fingers felt stiff and clumsy. Flexing them, he turned to face James.

The Dom took Carl's face in his hands then slid them down to his throat before he kissed Carl. Thumbs pressed against his windpipe and he waited an eternity until the pressure eased. When it did, a breath mingled with the kiss. Twice more James did this and Carl was seeing sparks when James ended the kiss and pushed him to his knees.

He could smell the sex of his lover through the slacks he wore and Carl unzipped them to free the fragrant shaft. The head was an angry red and shiny and he lapped at it like a dog, savoring the texture and flavor. He savored the moan above him as well. Time stood still, reality disappeared and nothing else mattered while he pleasured the man who showed him the true meaning of passion. He would never be able to go back to his former life of nameless hook-ups. He knew now how rich sex could be with the right person.

He stopped his worship of James’ cock to gain control of his need to come. His chest heaved with the struggle and when he thought he could continue, he mouthed his lover's cock in a frenzy to hasten the man's climax. Fingers gripped his hair and forced him to move faster and go deeper. The muscles of his throat accepted the invasion as James lost himself to the moment.

Salty and thick, the fluids of James’ orgasm filled Carl's throat and he swallowed as much as he could, but it bubbled from the corners of his mouth and threatened to go up his nose until he backed off to let the stream wet his face. It was James’ turn to tremble and Carl's heart swelled to know he could do that to the reticent Dom. He looked up.

James was frowning down at him. “I told you not to come.”

Carl's cock dripped onto the floor beneath him. “I'm sorry, sir. I couldn't stop it.”

Gentle hands playing with the curls on his head belied the stern words. “I will have to punish you again.”

I went into the experience with the notion that I was merely going to get a taste of a deviant lifestyle. The Dom was charismatic and the kinky sex might be good if I could get past the whipping part, because there was no way I would ever think that was fun. I believed I could never be truly submissive or enjoy pain. I was so very wrong

My life changed forever. The connection between Dom and sub is one of the closest relationships two people can have. Give and take became more than words. They became the basis of my existence. My body is no longer my own. He has access to everything I am— privacy does not exist, but when he looks at me it's with love. There is no fear and no shame because I am safe. I will always be safe with him.

As my Master will be safe with me.

— Excerpt from sixth article of New Leather by Carl Guttuso

The End
ABOUT DEBRA VARVA

Debra is fascinated with the creative process. From arts and crafts to writing, she gains a deep satisfaction in making something beautiful. She is an avid reader who carries a book everywhere— and opens it whenever there is a spare ten minutes. All genres interest her as long as romance plays a part.

She lives on the coast of New England with her husband and son and drives a school bus in her spare time.

If you enjoyed NEW LEATHER, you might also enjoy: 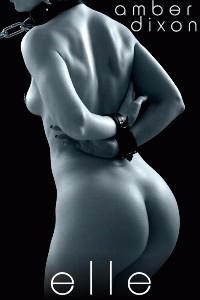 A creature of beauty and intelligence is a rare breed, especially one who so wantonly offers the submission of her soul to the protection of another

Elle has left her life in England to pursue a career in Detroit, Michigan. Following a violent attack, she stumbles into an urgent care clinic where she meets a very handsome, and married, American Doctor

They soon fall unintentionally and desperately in love, embarking on a deeply intense two-year D/s relationship. Knowing they must soon part, Elle is pushed into final submission. Can she truly release her fears and offer her heart for all eternity? Through one final limitless display of submission, expertly guided by her American Master, she finds her freedom in his dominance, one last time.

“Elle... just call me Elle,” she said smiling thinly with shame and embarrassment as she stumbled to the door of the treatment room and gripped the handle, desperate to leave both the room and the hypnotic gaze of the handsome doctor far behind her.

“You're very welcome... Elle,” the name tasted so sweet as it fell from his lips, “please take care of yourself and come back here to see me if those stitches give you any trouble.”

He smiled warmly and opened the door for her, hoping with a little too much fervor that the stitches would bother her, just so he would see her again.

He took a deep breath as the door closed behind her. He was never attracted to his patients, but this one was something else. Visions flooded his mind of her pale naked body, tied to his desk, her head falling over the edge so her hair tumbled to the floor. He imagined reaching out as he spread her, tying her ankles to her smooth buttery thighs and tracing his finger from her rib cage, down the flat of her taught stomach, over her silky mound and through the soft wet folds of her delicious cunt. He dipped his finger into her velvety moistness, as her moans of pleasure filled his ears.

“Please Master... ” she whispered in the depths of his imagination as she softly begged for his throbbing cock to be pushed between her full red lips. He may allow it, just so he could feel her warm willing mouth around his aching shaft as she sucked on him feverishly, her wide eyes looking up into his fiery gaze. In his minds eye he pulled from her mouth, leaving her pleading for more as he leaned over her writhing body and took the offering of a sensitive nipple pink between his teeth. His tongue explored the fleshy mounds of her pale naked breasts, relishing the softness of her perfect skin. He walked around her and pushed her knees further apart, exposing her to his ravenous hunger, knowing she was helpless in her bonds. He heard her gasps of ecstasy as his cock thrust forward and into her wanton opening.

He groaned and shifted uncomfortably in his seat, adjusting his rock-hard erection. He hadn't felt like this for so many years. He hadn't felt the need for such ultimate possession since... he cast his mind back, and he couldn't remember if he had ever felt this way after such a brief encounter. He had fallen instantly in love.

He pressed the buzzer for the intercom. 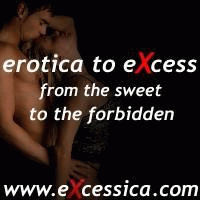 Check out both for updates about eXcessica books, as well as chances to win free E-Books!

Visit www.excessica.com for information on additional titles by this and other authors.