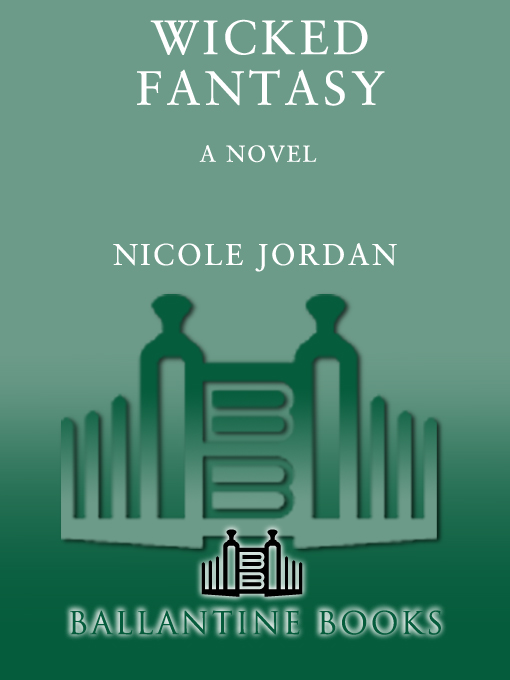 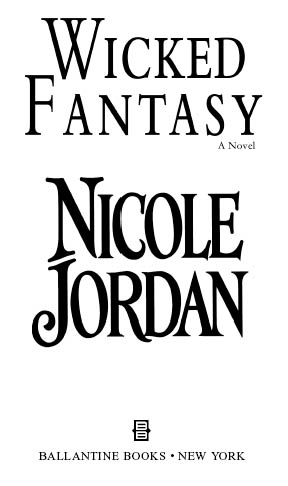 Other Books by Nicole Jordan

Read on for a sneak peak at Nicole Jordan’s most seductive novel yet . . .

If you were seduced by Wicked Fantasy, don’t miss one of Nicole Jordan’s steamiest novels, The Warrior

To Linda Francis Lee, who understands.
With love and thanks.

Her first sight of the wicked, dashing adventurer Trey Deverill startled Antonia Maitland immensely, for he was unmistakably, breathtakingly nude.

Seeing his unclothed body was purely accidental, of course.

Glad to be home from her select boarding academy for a spring holiday, Antonia handed her bonnet and gloves over to the waiting butler and turned toward the Map Room, where her father oversaw his vast shipping empire. She was eager to see him for the first time in over a month.

“I believe you will find Mr. Maitland upstairs, Miss Maitland,” the butler intoned. “Possibly in the gallery.”

“Thank you,” she replied with a brief smile, knowing her father must be communing with the portrait of his beloved late wife.

Antonia ran up the wide, sweeping staircase and hurried along the elegant east wing of the mansion. Eight years ago, shortly before her mother’s unexpected death of a lung fever, Samuel Maitland had spared no expense to build the grand residence in a newly fashionable district of London just south of Mayfair. But his favorite room was the portrait gallery, where he kept his wife’s memory alive.

Antonia’s current favorite room was the luxurious, newfangled bathing chamber, located at the far end of the corridor.

When she saw a footman exit the chamber and disappear around the corner, Antonia almost sighed in anticipation. Ever interested in novel inventions, her father had added a boiler in the kitchens last year that carried heated water directly above to the large, uniquely designed copper tub. The thought of a hot bath pleased Antonia to no end, since the elite Baldwin Academy for Young Ladies offered superior education and instruction in genteel social skills, but never such delightful extravagances as hours spent soaking in a steaming hot bath.

Upon reaching the corridor’s end, Antonia saw that the door had been left partway open. But when absently she glanced inside, she stopped short.

A man had just stepped from the oval tub.

She could see the side of his tall form—his bronzed back and taut buttocks, his lean hips and long sinewed legs, all streaming with water. Suddenly breathless, she stood riveted at the sight of his body: hard-muscled, vital, beautiful, except for the disfiguring scars on his torso. . . .

As if sensing her presence, he lifted his head alertly and swung toward her, giving her a fuller view of his loins.

“Oh, my . . .” Antonia murmured, startled and fascinated at the same time.

Swiftly, she jerked her eyes away from that forbidden masculine territory, only to have her gaze roam helplessly back up his body. In all of her nearly seventeen years she had never seen anything so stunning as this man. Or magnificent. Nor had she experienced such a purely primal, feminine reaction.

Heat flooded over her skin, and she felt a sudden, shocking warmth between her thighs.

When she managed to drag her gaze higher, from his broad, hair-sprinkled chest and wide shoulders, up the strong column of his throat, she realized that his face was as sinfully handsome as the rest of him. Slicked back, his wet hair was a sun-streaked brown, while his strong features boasted a square jaw and slightly clefted chin, roughened now with a hint of stubble. But it was more his striking, sea green eyes beneath slashing brows that gave him such a bold and wicked appeal.

When those clear green eyes locked with hers, Antonia felt fresh heat sear along all her nerve-endings.

He reached for a towel to cover himself and draped the linen around his lean hips. “I beg your pardon.” His voice was low and deep and unmistakably sensual, but fortunately, hearing it served to jolt Antonia from her captive state.

Realizing she had been staring witlessly, she blushed to the roots of her dark red hair and stammered a reply. “No—it was entirely my fault—I should not be here. . . .”

At her bluntness, a crooked smile flashed across his mouth.

Appalled by her uncustomary lack of manners, Antonia raised her hands to her fiery red cheeks.

“Trey Deverill,” he replied to her question, watching her expression for a reaction.

She gave him one; her eyebrows shot up as she
recognized the name.
Of course,
Antonia thought distractedly, with the satisfaction of a puzzle piece fitting into place.

She’d heard tales of the notorious Trey Deverill over the years—from various shipping merchants and sea captains, and from her father as well, since they’d been partners in a minor shipping venture for some time now. Deverill was an adventurer and explorer, renowned in particular for battling pirates on the high seas.

She had often imagined what he was like, but given his celebrated reputation, he was younger than she’d expected, closer to twenty-five than thirty, she calculated. And in the flesh, he was far more . . .
vital
than her wildest fantasies.

Deploring the direction her mind was taking, Antonia cleared her throat to compose herself and spoke, hoping to sound more mature than the green schoolgirl she was. “Forgive me for barging in on you, Mr. Deverill. And for my rudeness. It was merely a shock to find you . . . like this. I am not normally so easily flustered.”

“Understandable under the circumstances,” he observed, amusement glinting in his remarkable eyes.

He, on the other hand, seemed not the least embarrassed, she noted. Or inhibited. No doubt he was fully aware of the effect he had on females. On
her.
He stood at his ease, his head cocked to one side, contemplating her.

Or perhaps he was merely waiting politely for her to cease gawking and leave.

“Would you oblige me by shutting the door?” he finally said.

“Yes . . . certainly.” Coming to her senses at last, Antonia reached forward to grasp the door handle.

She tensed, wondering what he meant to say. “Yes?”

“I don’t think we should mention this unfortunate encounter to your father. He would skin me alive for compromising you.”

Her blush only heightened, if that was possible. “Believe me, sir, I have no intention of mentioning this to
anyone,
most especially my father.”

Firmly shutting the door, Antonia hurried away to resume her interrupted search for her father, determined to forget her decidedly scandalous encounter with the exciting adventurer.

Yet as she fled, Antonia knew without a doubt that the wicked, breathtaking image of Trey Deverill’s body would be indelibly etched in her memory forever.

Dinner that evening was a discomfiting affair for Antonia, since she could scarcely meet Deverill’s eyes over the expanse of gleaming china and crystal.

Thankfully, at least, he acted the gentleman. Not by a flicker of his long, dark eyelashes did he let on that they had already met under highly inappropriate circumstances. Yet Antonia had never been so tongue-tied in her life.

Her father regularly invited various sea captains and business partners to dine at Maitland House, and sometimes, as in Deverill’s case, to stay the night. Usually she peppered visitors with questions about their ships and their adventures at sea. But in this instance, Antonia remained so rarely quiet that even her father noticed and commented.

When she claimed fatigue after the long carriage ride from school, Samuel Maitland frowned skeptically at her absurd prevarication before resuming his conversation with Deverill.

During three more courses, Antonia determinedly kept her attention focused on her plate, although she couldn’t stop herself from casting surreptitious glances at Deverill from time to time.

He looked the part of a gentleman now as well. His fashionably tailored coat of blue superfine molded his powerful shoulders, while the pristine white linen of his cravat enhanced his rugged, rakish good looks. His thick, wavy hair had dried to a lighter shade of brown that glinted with streaks of gold—likely from being bleached by the sun, she surmised. His bold, smooth-shaven features were also sun-bronzed, doubtless because he spent a great deal of time on the deck of a ship.

Then Antonia recalled that much of the rest of him was just as bronzed and caught herself blushing. She might never be able to look at him again without picturing his magnificent, virile body.

It was even more lowering to acknowledge that she was unlikely to have the same fascinating impact on him. An extraordinary man like Deverill would pay her little notice. She was still essentially a schoolgirl—tall and gangly, with unconventional red hair, although
that
fortunately showed promise of darkening into an attractive auburn someday. In truth, her biggest claim to appeal was that as her father’s only child she would eventually inherit the vast Maitland wealth and shipping empire.

Samuel Maitland was a self-made magnate, whose firm built the swiftest ships in the world. Although a shrewd businessman with a hand in numerous enterprises, he had chiefly made his enormous fortune with his brilliant designs for sailing vessels.

His genius, however, was considered an anathema to respectable society. He was not only a mere commoner, but worse, he was
In Trade.
A Cit, looked down upon by the snobbish ton. And in truth, he had little polish or refinement—which was why, in an attempt to increase his daughter’s respectability, he had sent Antonia to the most exclusive young ladies’ academy in England.

Where you had exquisite manners drummed into your head,
Antonia sternly reminded herself. So why was she sitting here as mute as the potted palm gracing the rear corner of the dining room?

In an effort to conquer her deplorable bashfulness, she forced herself to speak during a lull in the conversation. “I suppose you have had a good many adventures, Mr. Deverill?”

Tails You Lose by Lisa Smedman
The Scarecrow by Michael Connelly
Falling In by Lydia Michaels
Four Shades of Recovery: Boxed Set by J. S. Luxor
Alice-Miranda In New York 5 by Jacqueline Harvey
Fire in the Blood by George McCartney
The Right Moves - The Game Book 3 by Hart, Emma
Judgment by Denise Hall
Between Two Doms [Club of Dominance 1] (Siren Publishing Ménage Everlasting) by Becca Van
Fat Man and Little Boy by Mike Meginnis
Our partner