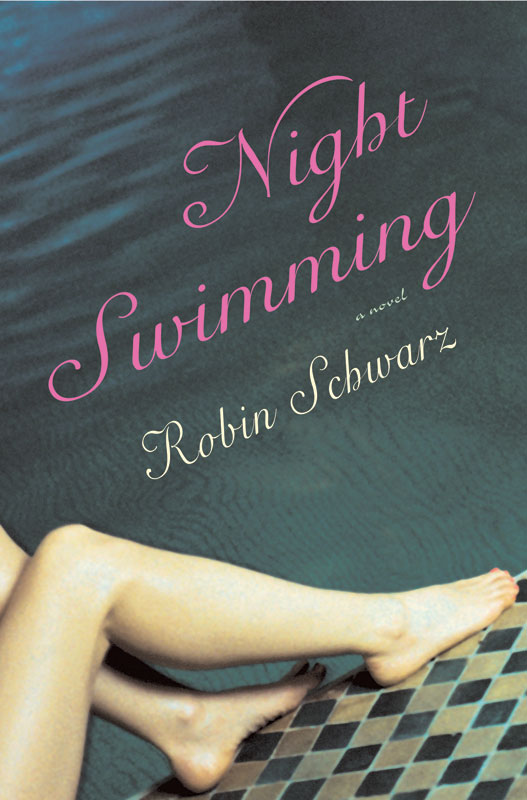 To my father, who gave me my love for words,

and to my mother, who told me to take typing as a backup.

I love you both, dearly.

F
IRST AND FOREMOST
, I would like to thank Jim Patterson for his unending support. He not only offered his invaluable advice and encouragement, he took me under his wing as well. His immeasurable generosities included an invitation to join him on his book tour. A simple thank-you seems greatly insufficient. Suffice it to say that I will be forever grateful.

I would also like to thank my dear and closest friend Laurie Garnier, who unfailingly read every draft (and there were several) and who provided countless ideas and insights that enriched the story in so many, many ways. I wish to thank attorney Millie Wayland for her legal expertise and continual magnanimity and Richard Viets, a U.S. Marshall, who patiently explained the workings of our criminal justice system. Thanks to Irene Markocki, who never lost faith; Janet Wollman, Shana Kelly, Fran Marzano, Tanya Gunther, Joe Smookler, Rob Snyder, Linda Kaplan. Thanks to Flag Tonuzi for his beautiful cover; Michael Carr for his copyediting extraordinaire; Penina Sacks, my production editor, who is a pearl of a girl; Le Biarritz for the countless hours I sat in there writing, rewriting, drinking, rewriting; David Schneiderman; Carter Campbell; Megan Rickman; Christine Price; Scott Mills; Stuart Pittman; Emily Nurkin; Dr. Tom Pearce and Dr. Charles Hatem (to whom I owe a long-overdue thank-you and who in no way represent the doctor portrayed in this book). To my dear friend Sally Chapdelaine, who offered excellent suggestions in making
Night Swimming
an even better swim. A special thanks to Dick Duane who championed my efforts well before
Night Swimming
was even a trickle. And to my wonderful agent, Suzanne Gluck, who took me on, believed in me, and made all the hard work worth every word. Finally, a big, big thank-you to my fabulous editor, Caryn Karmatz Rudy, whose sharp mind and tender counsel was vital in guiding me through. Her suggestions always and only made this book better and better and better. And I promise you, Caryn, I will not make any more changes to
Night Swimming.
And when they are on the shelves in bookstores, I will not take them down one by one, rewriting sentences I think would be better if only there had been an “a” instead of a “the” or that the sky should have had more stars or less stars or no stars at all. Let the stars fall where they may, and thank you all.

There came a time when the risk to remain tight in the bud was more painful than the risk it took to blossom.

Charlotte considered why Dr. Jennings chose to settle in Gorham. He wasn’t born here, and most people who are, set their sights on getting out. There must be something wrong with him under all that perfection. Why else would he be here in Gorham—in other words, nowhere? Gorham boasted one tiny two-man police station, a post office, a 7-Eleven, a fish plant, a church, a Bickfords restaurant, a bowling alley, a beauty parlor, a bank, one school, one doctor, one gas station, and an upside-down stop sign that had been swinging from its hinge for months. Summer or winter, most of Charlotte’s neighbors found their entertainment by staying home and watching TV. Living in Gorham was like watching paint dry.

Charlotte Clapp had lived in Gorham her whole life, all of it in a small house on Middle Street. Middle Street—even the name was neither here nor there. It wasn’t the beginning of anything or the end. It was simply and unremarkably the middle. And this middle was where she lived, floating in what felt like a long and everlasting in-betweenness.

Charlotte looked around Doctor Jennings’s waiting room. Two other people waited there as well. A woman was knitting a scarf that was so long, she could throw it out of a window during a fire to save herself. Next to her sat a man with an utterly nondescript face, notable only for its extreme thinness. Charlotte held up her wrists and squinted to compare them to the man’s scrawny pipe-cleaner neck. Was it possible her wrists were wider?

This depressing thought reminded her that she would soon have to disrobe for the fantastically fit Dr. Jennings. She shuddered. If only there were another way to have a physical. Virtual physicals. Yes, why hadn’t someone thought of that yet? They probably had. It was likely they existed everywhere except in Gorham.
But how would I know, having never left the zip code?
And then he appeared, Sir Doctor Jennings, white coat and all, looking like a Nobel Prize winner or, worse yet for Charlotte, Dr. Kildare. She stood up to enter the examining room.
I don’t care what anyone says; I’m not going to get on the scale. That’s for damn sure.

“Good morning, Charlotte,” he said, motioning her in. Charlotte paused, aware of just how much room was left in the doorway in order for her to pass. None. He moved.

“Take a seat and relax,” he said, motioning to the chair. “I’ll be back in a minute.”

The nurse handed her a paper nightgown. “Change into this, honey, and leave the opening at the back.” Charlotte stared at the flimsy garment before her. It was a joke. She could use it as a handkerchief or a handy wipe or something to line the inside of a gift box with, but certainly not as a cover up. Calista Flockhart? Maybe. Charlotte? No. The armholes in the gown were no bigger than the holes you’d find in Swiss cheese. She tore them open, leaving her backside exposed like the state of Texas. Now all that was left to feel sick about was the reemergence of Dr. Jennings. Handsome, single Dr. Jennings. It would be an awful visit: He’d come in and ask her to sit up, when she was already sitting up. He was probably outside that door right now, dreading the prospect of having to touch any part of her. Why else would he be taking so long to return? Charlotte sat as straight as she could but still had more folds than a blanket stuffed in a trunk. She wondered if Dr. Jennings talked about how fat she was to other people.

I have this patient who is incredibly obese. I was thinking of suggesting that she get her stomach stapled.

And then he’d be off to an office supply store to get the necessary equipment. Hammers, nails, sump pumps.
Oh, Charlotte, stop thinking like this. He’s a professional. Act normal.

Finally, there was a knock at the door, and Dr. Jennings entered. Charlotte’s resolve to act normal evaporated like steam disappearing from a teacup.

Oh, God, don’t look at me. If the blind can read braille, surely you can just close your eyes and figure it out.

“Why are you in a gown?” he asked, to Charlotte’s surprise.

“The nurse told me to change.”

“I don’t need to examine you; I only need to talk to you about the tests we took last week. They just came in today.”

“But, since you’ve already changed, we can talk like this.”

“Maybe I should just change anyway.”

“No, that’s not necessary. I have some things to go over with you. Please, why don’t you sit over here,” he said, pointing to a chair.

“No, I’m fine.” If I move off this table, this thing will rip open like the Grand Canyon. Jennings will try to hide his eyes, but he won’t be able to, because everywhere he looks, there I’ll be, filling the whole room with mountains of flesh. My cleavage alone could be a danger to him. He could fall into it like a crevasse and never be heard from again. And then the room will go dark while my behind blocks the sun like an eclipse.

“No, really, I’m fine up here on the table. It’s comfortable, in fact.”

“Okay. Well, Charlotte, I have some rather upsetting news. We got the results from the blood tests you took, and they weren’t exactly what I’d call good.”

Dr. Jennings’s voice delivered these words as if he were placing a dinner order. It sounded as matter-of-fact as “Oh, and no butter on the scrod...I like it dry.” Charlotte stared at him, watching his mouth move but only heard the slow, syrupy sound of bass notes pull his lips apart like taffy.

“Charlotte, we checked and rechecked the lab results, but I’m afraid it looks unquestionably like cancer.”

Dr. Jennings continued, but Charlotte’s brain was stuck on one word. The
C
word, the unmentionable disease she had feared since the first time her mother sat her down eight years ago and softly, ever so softly, told her the terrible news that Charlotte had already known but simply could not face. The
C
word only meant one thing, and that was death.

She had gone in last week for a routine physical. No big deal, just a tune-up really, as if she were having her car inspected. Then this morning she had received a call from Dr. Jennings’s nurse.

“Can you come in today, Miss Clapp? Dr. Jennings needs to do a follow-up with you.”

A follow-up? Of course, this made sense. An efficient doctor, must be routine. Nothing to worry about. Certainly nothing to prepare her for the news she’d just received.

No, this couldn’t be right. This had to be someone else’s news, not hers, not thirty-four-year-old Charlotte Clapp’s. Her life might be boring, but it was predictable. And this... this had not been predicted. And yet here was Dr. Jennings, cool, self-assured, twenty-nine-year-old Dr. Jennings, doling out fates like a postal worker tossing letters into the correct address bins.

“One year, Charlotte... one year,” Jennings repeated. Or maybe he hadn’t. Maybe she only thought she’d heard it again, as the words were irrevocably lodged in her brain, echoing over and over like a distant drum of doom.

Piece of Tail by Celia Kyle
The Second Lady Southvale by SANDRA HEATH
If You Could See Me Now by Peter Straub
Beginning with Forever by LLP, Lan
Mary Queen of Scotland & the Isles by Margaret George
Brighton by Michael Harvey
Goddess of Yesterday by Caroline B. Cooney
Hunting Season by Erik Williams
Aurora: CV-01 by Brown, Ryk
The Queen by Suzanna Lynn
Our partner