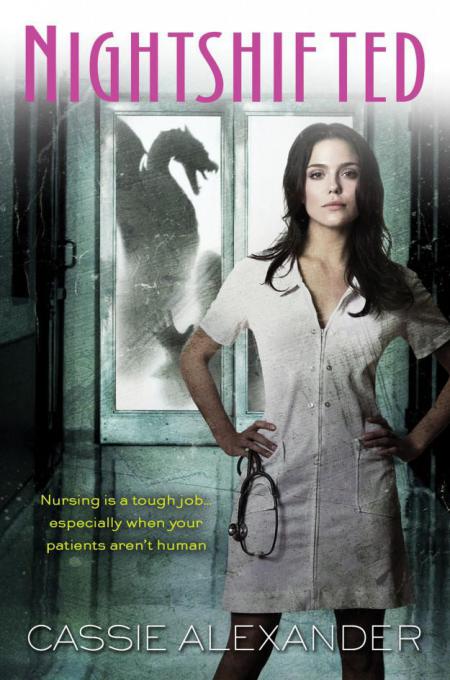 From debut author Cassie Alexander comes a spectacular new urban fantasy series where working the nightshift can be a real nightmare.
Nothing compares to being Nightshifted.

Nursing school prepared Edie Spence for a lot of things. Burn victims? No problem. Severed limbs? Piece of cake. Vampires? No way in hell. But as the newest nurse on Y4, the secret ward hidden in the bowels of County Hospital, Edie has her hands full with every paranormal patient you can imagine—from vamps and were-things to zombies and beyond…

Edie’s just trying to learn the ropes so she can get through her latest shift unscathed.  But when a vampire servant turns to dust under her watch, all hell breaks loose. Now she’s haunted by the man’s dying words—
Save Anna
—and before she knows it, she’s on a mission to rescue some poor girl from the undead. Which involves crashing a vampire den, falling for a zombie, and fighting for her soul.
Grey’s Anatomy
was never like this…

"Dark and clever full moon insanity that will get into your blood, crawl under your skin and haunt your dreams."
—
Sherrilyn Kenyon, #1 New York Times bestselling author of the
Dark Hunter
series

"
Nightshifted
’s main character, nurse Edie Spence, has a distinctive, appealing, and no-nonsense style that you won’t quickly forget. Add to that a paranormal population that needs medical care for some very odd reasons, and you have a winner of a debut novel." –Kate Elliott, author of the
Cold Magic
series

"Fresh, exciting, dark, and sexy, Nightshifted is excellent urban fantasy that grabs you by the throat and pulls you along for a wild ride. Cassie Alexander is an author to watch!" –Diana Rowland, author of
Mark of The Demon

“I loved this book. What a breath of fresh air!  It’s filled with fascinating characters, including an enigmatic zombie firefighter, weres, shapeshifters, and of course, vampires. A memorable scene with a STD afflicted dragon (yup) had me on the edge of my seat, the budding romance with Ti (zombie firefighter!) is sweet and tender, and I just plain loved hanging out with Edie. Nightshifted is a very strong start to what promises to be a wonderful new series!” –My Bookish Ways

“Edie is a fun character with heart and charisma, making it easy to fall for her and want to see her succeed in all of her adventures, whether they be dealing with paranormal patients, evil vampires, or potential lovers. If you like your urban fantasy to have a dose of romance, then
Nightshifted
is for you.  Highly recommended.” –The Debut Review

“I really enjoyed the new type of monster mythologies introduced in
NIGHTSHIFTED
. I especially liked the idea that you need a certain amount of blood exposure before becoming a full fledged vampire. I can’t wait to read more about the Y4 wing of County Hospital’s residents and this strange new world when the next book comes out.” –All Things Urban Fantasy

“Alexander’s first novel launches a new series that should appeal to fans of medical thrillers as well as urban fantasy.”–
Library Journal

“
There's so much paranormal stuff out there that I often find myself longing for some true urban fantasy.
Nightshifted
is the one I was starving for. It's gritty and dark, its heroine jaded and tough, and both of them are studded with moments of humor and human frailty.” –
Angieville.com

Welcome to the secret wing of County Hospital—where vampires get transfusions, werewolves have silver allergies, and one nurse is in way over her head…

Nursing school prepared Edie Spence for a lot of things. Burn victims? No problem. Severed limbs? Piece of cake. Vampires? No way in hell. But as the newest nurse on Y4, the secret ward hidden in the bowels of County Hospital, Edie has her hands full with every paranormal patient you can imagine—from vamps and were-things to zombies and beyond…

Edie’s just trying to learn the ropes so she can get through her latest shift unscathed.  But when a vampire servant turns to dust under her watch, all hell breaks loose. Now she’s haunted by the man’s dying words—
Save Anna
—and before she knows it, she’s on a mission to rescue some poor girl from the undead. Which involves crashing a vampire den, falling for a zombie, and fighting for her soul.
Grey’s Anatomy
was never like this… 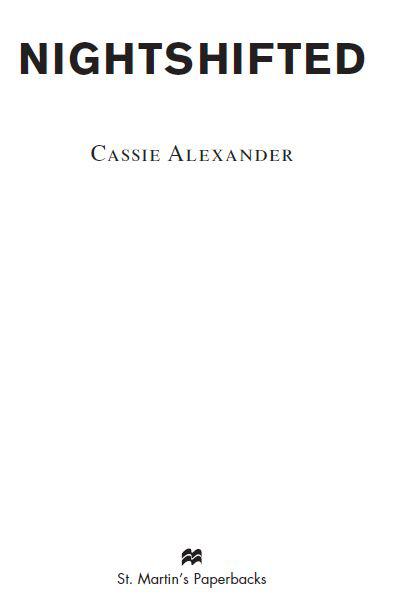 For anyone who ever got paid a little extra to stay up very late.

This book would not have been possible were it not for the efforts of many other people, only some of whom I’ll get to recognize here. Firstly, my husband, Paul, for understanding completely what I’m trying to do; my agent, Michelle Brower, for believing in this crazy book; and my editor; Rose Hilliard, for buying it and her excellent input afterwards. I am forever in the debt of my alpha reader, Daniel Starr, who played an incalculable role in making me the writer I am today. I will always appreciate my beta readers, Tina Connelly, Anna Eley, Patrick Weekes, and Julia Reynolds, for letting me borrow their brains and time. I promise to return their brains soon. My parents for not always getting this, but being supportive anyway. My writing friends Rachel Swirsky, Blake Charlton, David Moles, and Barry Deutsch for getting it, and still being supportive, even though being on the publishing inside they knew everything that that would entail. Thanks to Matt Bellizzi for showing me how to shoot a gun, Vera Nazarian for help with Russian, and my girlfriends V, C, M, and J in real life, for listening and making me occasionally leave my house.

Any mistakes in this book are mine. No part of this book constitutes actual medical advice. Not all doctors are bad, just some of them can be annoying.

Last, but not in any way least, I want to thank the girls on my work weekend for keeping me out of trouble. Thanks for not letting me accidentally kill anyone. I appreciate that most of all.

“How can your liver be this good?” I stood outside Mr. November’s room, watching him stir restlessly. Normal people couldn’t get 20,000 micrograms of fentanyl and 80 milligrams of Versed an hour and live, much less still be attempting another slow-motion escape from their hospital bed.

But I knew Mr. November wasn’t normal. From my assessment, when I’d seen his chipped yellow fangs around his titanium-tipped endotracheal tube, and from the way he was restrained in bed—six soft cuffs, two on each arm, one on each leg, a Posey vest wrapped around his chest and tied beneath the bedframe—and from the fact that he was here on Floor Y4 to begin with. No one here was normal, except for me. I was human and looked it: average brown hair, average blue eyes, average hips. My patients here? Let’s just say “average” was not the first adjective you’d pick for them if you saw them on the streets. Or the twentieth.

Mr. November continued to squirm. I wondered which cheerful member of our daytime staff I’d be giving a report to come seven
A.M.
with him crawling out of bed behind me. I could almost feel them judging me now.

“Hey, you!” I shouted and leaned into his room to try to attract his glazed attention. “Stay still!” I commanded through the door. Sometimes with agitated patients the voice of nursing authority buys time. I dashed to the supply room, unlocked the narcotics drawer, grabbed a bag of fentanyl, and made it back to his room as he started to thrash his head from side to side.

“Stop that!” I hauled on my isolation gear as fast as I could. If he managed to knock his endotracheal—ET—tube loose, that’d be the end of his ventilator-assisted breathing, which’d be the end of him. I put my gloves on, snatched the bag, and rushed inside. When I silenced the pump alarm’s beeping he visibly calmed.

“You have to stay still, sir. You’ve got pneumonia and you’re in the hospital.” I switched out the bags and reset the pump. I inhaled to say more, but I saw Meaty, my charge nurse, rise up like a moon behind the nursing station outside, holding one thick hand up in the shape of a phone. It was the international nursing gesture for, “Call the doctor?”

Mr. November’s hands spasmed again. I didn’t know if he was reaching for me with a purpose, if he just wanted to be free, or if he didn’t understand what was happening—not unlikely, with all the meds he was getting—but I grabbed his nearest hand in both my own. “You’ve got to rest now, okay?” His grip tensed and so did I—most of the training videos I’d watched before starting this job had emphasized the “minimal patient contact” rule, for vastly good reasons—but then he relaxed, letting me go.

Aftermath by Rachel Trautmiller
After: The Shock by Nicholson, Scott
Tex Appeal by Kimberly Raye, Alison Kent
The Maze by Will Hobbs
Under the Covers by Rebecca Zanetti
The Broken Spell by Erika McGann
A Place Called Harmony by Jodi Thomas
Billionaire On Fire: The Complete Series (A Bad Boy Alpha Billionaire Romance) by Claire Adams
“He had two blades,” Keenan said by Editor
Aaron: Book Three (Scars 3) by West, Sinden
Our partner