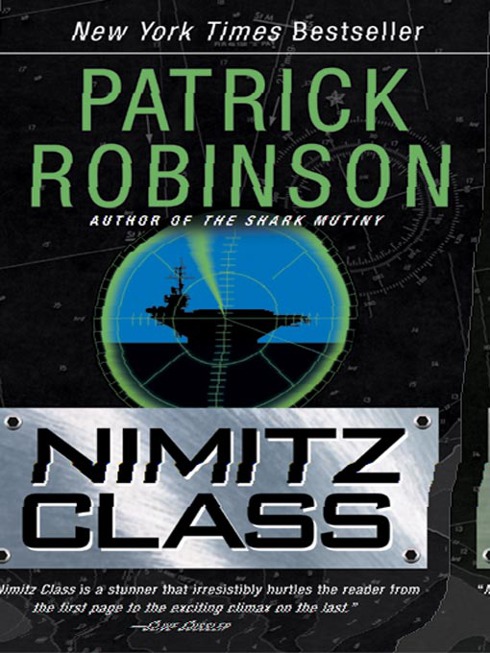 Nimitz Class
is respectfully dedicated to the officers and men of the U.S. Navy and the Royal Navy…to all of those who go down to the sea in warships, and who sometimes face great peril in great waters. 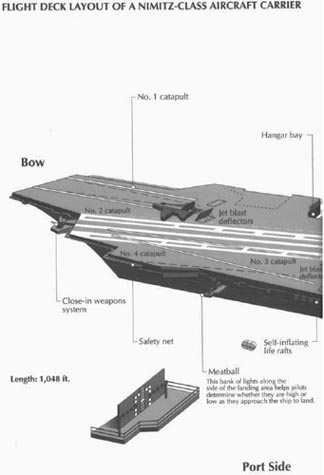 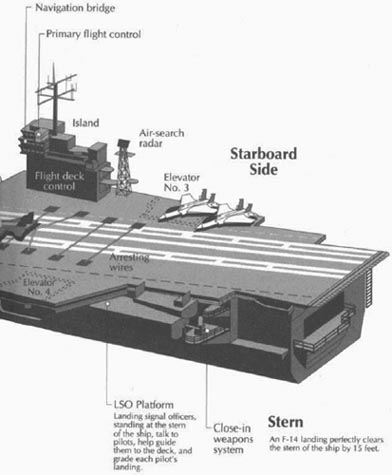 Radar picture from the Thomas Jefferson

The Approaches to the Iranian Naval Base at Bandar Abbas

Marine Chart of the Bosporus

Waiting for the Kilo: U.S. navy’s Submarine Barrier Southwest of the Falklands

I
MAGINE NEW YORK’S EMPIRE STATE BUILDING, TURNED
flat on its side, moving across the ocean at around thirty knots, a big, white bow-wave surging over its radio tower, and you have a good approximation of a one-hundred-thousand-ton U.S. Navy aircraft carrier on patrol.

The huge $4 billion warship is 1,100 feet long, and powered by its own private nuclear plant. This is the colossus, the Nimitz-Class carrier, named after the Texas-born World War II admiral, Chester W. Nimitz, who masterminded the ambush which destroyed the Japanese at the Battle of Midway in June 1942, sinking four of Admiral Yamamoto’s finest aircraft carriers and 332 of his aircraft.

Today, these modern U.S. carriers rove the oceans in his name, ruling a five-hundred-mile radius of air, sea, and land wherever they move. But the Nimitz-Class giants do not travel alone. They are normally accompanied by a small flotilla of guided-missile cruisers, destroyers, and frigates, and two hunter-killer submarines. Loosely arranged in classic operational disposition, this Carrier Battle Group is known in Navy shorthand as the CVBG.

The group is the undisputed master of the skies, the oceans, and the dark, menacing reaches of the kingdoms beneath the waves. Alone on his bridge, the admiral who commands it looks out on the biggest, fastest, deadliest warship ever built. He is the Warlord of the twenty-first century.

At the hub of his ten-ship surface group, there are eighty fighter/
attack aircraft arrayed on the deck, with the guided-missile escorts in loose proximity. The admiral’s nuclear submarines ride shotgun far out in front.

Smaller countries of military wealth and sophistication—the United Kingdom, France, Germany—lack the capacity to raise even one comparable force. Not even Russia with its gigantic, moribund Navy, can match the power of the American Carrier Battle Group. The United States runs twelve of them, each carrier alone costing $440 million a year to operate.

Fifty-five percent of the money spent annually on defense by all countries is expended by the Pentagon. Each aircraft carrier sustains a gigantic seaborne staff of six thousand men, with close to six hundred officers.

Deep in the lower decks of the ship, the cooks provide eighteen thousand meals every twenty-four hours, plus a small meal for the midnight watch (MIDRATS). Three times a day the whistle blows, and they begin unpacking food from boxes on a scale almost beyond belief. Sometimes hundreds of big gleaming cans of ravioli or meatballs are being thrown, simultaneously, expertly, from the unpackers, to the kitchen hands, then on to the cooks.

A big-deck carrier stands about twenty-four-stories high from keel to masthead, with a 260-foot-wide flight deck. She draws forty feet below the waterline. Powered by two big G.E. PWR nuclear reactors, her range and time at sea are almost infinite, limited only by the stamina of the crew. In addition there are four steam turbines, generating 260,000 horsepower. Four propeller shafts, each the size of a hundred-year-old California redwood, drive her forward.

Of her 6,000 personnel, 3,184 are concerned solely with moving the great warship safely about the oceans. There are 2,800 aircrew on board, responsible for flight operations and maintenance of the aircraft. The admiral, whose concerns are battle group strategy, tactics, efficient firepower, and surveillance of a potential enemy, travels with a staff of twenty-five officers and forty-five men. His operations center is the bottom line of the U.S. Navy’s offensive and defensive charter.

The admiral can, at will, move heavy U.S. muscle closer to an enemy’s border than any other commander in history. He can move freely through international waters. He is completely mobile, self-contained, and deadly to any opponent. In the bowels of the ship there are stored missiles with nuclear warheads.

The carrier is flanked by Aegis missile cruisers, whose computer controlled weapons can hit and obliterate an incoming air attack traveling at up to twice the speed of sound. The Battle Group’s close-in destroyers can take care of any air, surface, or underwater threats. The guided missile frigates, with their LAMPS helicopters, provide an anti-submarine dragnet which can stretch for hundreds of miles in every direction.

The nuclear killer submarines, which can stay underwater for years if necessary, patrol hundreds of miles, clearing the trail for the carrier and its consorts. Armed with wickedly accurate wire-guided torpedoes and cruise missiles, they seek principally to destroy their enemy counterparts.

A vast electronics system ties the group together in a tight network of communications, relaying minute-by-minute, ops room–to– ops room, ship-to-ship, the operational state of this moving cell of almost inconceivable power. The Carrier Battle Group is perfectly capable of eliminating, simultaneously, threat from air, surface, and underwater.

The spearhead of its attack is its bomber force—twenty deadly accurate, all-weather aircraft, archenemies to any ship hostile to the United States, plus twenty FA-18 supersonic fighter/attack Hornets. To defend the Battle Group and/or to provide cover for the bomber force, there are another twenty fighter aircraft—principally the heavily gunned missile-launching F-14 Tomcat and the supersonic F-14D Super-Tomcat. In an emergency, they can launch these aircraft with the huge steam-driven catapults, two at a time, off the five-acre flight deck—zero to 150 mph in two seconds.

In addition there are usually four EA-6B Prowlers, another heavy-hitter which possesses the unique ability to jam enemy radar completely, rendering any opponent impotent, a sitting duck for the U.S. air offensive line. The other great electronic specialist aircraft
on deck is the S3 Viking, a search-and-strike torpedo-launching attack plane, which can probe underwater from the air, and destroy an enemy submarine hundreds of miles out from the main group.

On deck and in the hangars below there is usually a fleet of eight helicopters—Cobra gunships, Sea Kings, and probably one massive CH-53 transporter, which can carry, and land, either attack, or rescue, teams of up to fifty-five U.S. Marines.

The aircraft carrier itself is equipped with missile and gunnery capability, the Nimitz Class being the most heavily armored warship afloat. Her double hull and heavy sealed compartments along the waterline make her easily the most survivable warship in Naval history.

Every major team needs a quarterback, and in the CVBG the big plays are called by the E2C Early Warning and Control, Hawkeye.

With its great radar dome sending and receiving the electronic beams above the aircraft’s computerized ops room, this heavyweight Naval warplane makes it just about impossible for any enemy to move undetected within a thousand-mile range of the carrier.

The carrier’s strike aircraft are supersonic and on the surface the carrier itself can travel up to five hundred miles in a day, controlling the sea wherever she sails. With forty of America’s forty-two allies residing across various oceans from the U.S. mainland, it is as well that 85 percent of all the land on this planet lies within range of an American Carrier Battle Group. And 95 percent of the world’s people.

Yet few of these hundreds of millions of citizens realize their lives are lived in comparative peace and security because of the iron-fisted defense capability of the U.S. Navy. Most of them believe this security has been orchestrated by the United Nations, or NATO, or by some quasi-European defense project. But when push comes to shove, it is the U.S. Carrier Battle Group, the fortress at sea, that matters. This is the force that is apt to show up off the shores of potential aggressors.

Unreachable by air or sea attack, virtually unsinkable by any conventional underwater weapon, surrounded by a wall of guided
missiles and tracking electronics, protected twenty-four hours a day by a sweeping, computerized radar field, home to its own fighter-attack supersonic air strike force…

No word in the English language accurately describes the invincibility of the U.S. Navy’s aircraft carriers, save one: impregnable.

The President of the United States (Commander-in-Chief, U.S. Armed Forces)