Read No Going Back Online 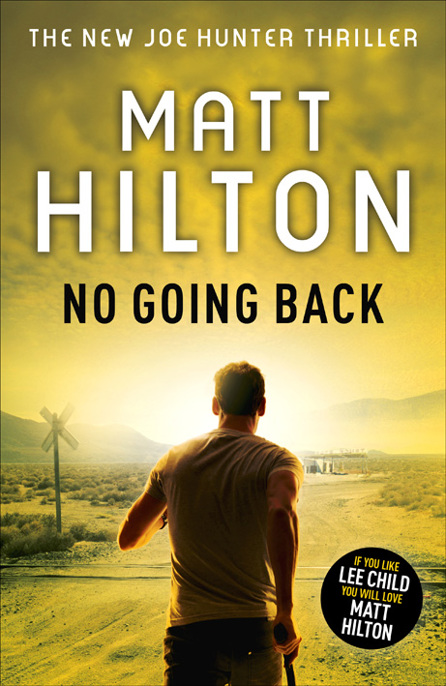 Matt Hilton has worked in private security and for the police

force. He is a 4th Dan blackbelt and coach in ju-jitsu. He lives in

Cumbria with his wife, Denise.

has been asserted by him in accordance with the Copyright,

This one is for my son,

. . . there was about him a suggestion of lurking ferocity, as though the wild still lingered in him and the wolf in him merely slept.

Pain lays not its touch upon a corpse.

She thought she’d seen the last of them. But they were back and by the way they pushed their pick-up over the humps in the road they intended catching her. Should have shut my mouth, forgotten about the gas and got the hell outta there, she told herself. She shouldn’t have got involved. But she’d always had a nose for trouble, and a mouth big enough to sink her right in the middle of it. At first the patched old Dodge had been a pale blur dancing in the heat haze, but now she could make out the blocky shape and could see it was missing a mirror on the right wing. It was them all right.

‘Why didn’t I just keep my fat mouth shut?’

Jay glanced over at Nicole. Sweet little Nicole with the size-zero frame and timidity to match was perspiring and it had nothing to do with the desert heat. Normally she had a neat Louise Brooks bob, but right now the dark strands were being whipped around by the wind blasting through the open window. Under any other circumstances it would have been a good look.

‘Why are they following us?’

‘They probably didn’t have enough fun back there at the gas station,’ Jay said. ‘Don’t worry, Nic. I’ll get us out of this.’

‘You’re sure about that?’

‘Yeah. We just have to show them we aren’t afraid of them.’

‘I won’t let anything happen. I promise.’

Nicole was a year older than Jay, but you wouldn’t think it. The energy of their pairing wrongly matched them as siblings, and strangers always assumed that Jay was the elder sister. It was the way she looked out for Nicole, as if her petite friend would snap under any strain. It came from being what her grandma called an old soul in a young body. More likely, Jay thought, it came from her given name. Joan was a name for someone of her grandma’s vintage, not a twenty-two year old. When meeting people for the first time, Jay Walker only ever introduced herself by her initial and surname, which earned her a raised eyebrow or two. ‘I like to live dangerously,’ she’d say with a wink. Now, watching that pick-up truck growing in her mirrors, she thought her words had caught up with her. Her next thought: what name would be written on her gravestone?

Jay had only wanted a comfort break. The litre of spring water she’d downed in the last hour had made a stop a matter of urgency, and though they had enough gas for another hundred miles or so, it had made sense to fill the tank before entering the desert. Kill two birds with one stone: that was the idea.

When she angled her father’s SUV up the dirt ramp and between the pumps at Peachy’s gas station, there was already another vehicle filling up and she had to wait. Squeezing her thighs together, dancing in the seat, she knew she couldn’t last.

‘She’s all yours, Nic. I gotta go.’ She shut off the engine and slipped out on to wind-marbled concrete. She tossed the keys to her friend. ‘Fill her up, OK? I’ll pay on the way out.’

As she approached the teller’s shack, she glanced over at the old Dodge and the man feeding gas into its greedy tank. The man was tall, gaunt, with sun-dried skin and the cowboy duds to match. He’d taken off a battered straw hat and placed it on the cab while he drew on a hand-rolled cigarette. Even from there, Jay saw that the whites of his eyes looked jaundiced, almost as yellow as his nicotine-stained fingertips. He saw her, tipped an imaginary hat with his thumb. Jay smiled, but quickly averted her gaze. His gap-toothed grin wasn’t friendly.

She looked for a separate bathroom, but the teller’s booth looked like the only structure on the site. The restroom had to be inside. At the front, two glass doors smudged with thousands of fingerprints were wedged open, racks of spoiling fruit and yellowing newspapers standing sentry. Inside was a dim little space, with a cooler offering drinks and snacks on one side and racks with cans of oil, maps and postcards, and turquoise trinkets on the other. The teller was an old Native American man in trousers and braces over a checked shirt. Standing on the customer side of the counter was a man with wide shoulders and long straw-coloured hair. The man was in the middle of showing the teller something when Jay bustled inside. She caught the teller’s eyes, knew immediately that what the stranger was showing him wasn’t nice.

That was when she’d first opened her big mouth.

‘Hi,’ was all she said but it was enough to ruin everything.

The teller flicked a cautionary glance at her.

The man with straw for hair turned and regarded her with a look to spoil milk. His mouth drooped open at one corner, and Jay saw he was chewing on a Chupa Chups lollipop. As he appraised her, taking in her athletic figure, her short cropped auburn hair, and lingering on the swell of her breasts, his expression changed. Now it felt like it was Jay who was spoiling from the bilious suggestion in his gaze.

Jay was no fool. She knew that she’d walked into something best avoided, but she had reached a point of desperation. She gave the man a tight-lipped smile, but aimed her words at the teller. ‘Excuse me, sir? May I use your bathroom?’

The old man waited a fraction too long to respond. His reply sounded forced. ‘Out of order, ma’am, I’m sorry.’

Jay glanced at the door next to the counter. There was no sign on it, nothing to hint that the toilet was broken. But she got the man’s words, his subtle warning that she should leave now. She glanced outside to see that the pick-up truck had moved forward and Nic was now taking a turn at the pump. The older cowboy was leaning on the wing of his truck, toying with the space where a mirror had been broken off, but his gaze was fixed on her friend. His gaze was as lascivious as that of the younger man.

Get out, get out now, her mind screamed. Yet she was caught in a dilemma. How could she leave without first paying for the gas? She knew that the teller wouldn’t demand remuneration, but the young man would immediately say – or worse do – something about it.

‘How much do I owe you?’ She pulled cash from her jeans pocket.

The teller squinted at a display. ‘Twenty dollars should do it, ma’am.’

Jay leaned past the young man, extending two tens. The teller reached out for them, his fingers trembling. Then a palm slammed the notes down on the counter, and the young man snapped, ‘The hell is this? Don’t I get the same discount?’

At his intervention both Jay and the teller had reared back, and the young man stepped into the gap between them. He grabbed Jay, snaring her wrist in his rough palm.

‘Get your hands off me!’

The young man leaned close, saliva bubbling around the stick of the lollipop. She could smell his sickly-sweet breath as he exhaled. ‘Now this just ain’t right. There’s one price for me, another for a pretty city girl?’

The teller quickly dipped his hand into a drawer, came out with a clutch of dollars. ‘Here, take them. Take them all back.’

‘So now my money’s not good enough? I’m goddamn offended by that!’

Jay tried to twist out of the man’s grasp, but his fingers were like steel coils. ‘Get off me or I’ll call the police.’

‘The po-lice, huh? Well that would be a damn fine idea . . . seeing as I’ve found myself a couple thieves working in cahoots here.’

‘Thieves? Are you mad?’ Jay snatched her hand loose this time, but the young man wasn’t finished. He grabbed her by the front of her jacket and pulled her tight, thrusting her against the counter with his hips. Her kidneys were forced against the wood, but she’d lost the urge to urinate.

The teller pulled more dollars out from under the counter. ‘Look, son, just take it all, OK? We don’t want any trouble. Just take the cash and be on your way.’

The young man crunched, then spat out the stick of his lollipop. He’d sucked it down to the paper. ‘Are you sayin’ I’m a goddamn thief now? Shee-it! I was offended before, but now I’m pissed.’

‘Things got outta hand a long time ago, missy,’ the man said against her neck. Jay squirmed, but he jammed her with his hips again as he dug into his shirt pocket. ‘You see this girl here?’

The man waved a sheet of paper under Jay’s nose. It was a Xeroxed photograph with a name under it. It was far too close for her to focus on. The man reversed it and waved it in front of the old man. ‘I’m looking for her. Either one of you seen her?’