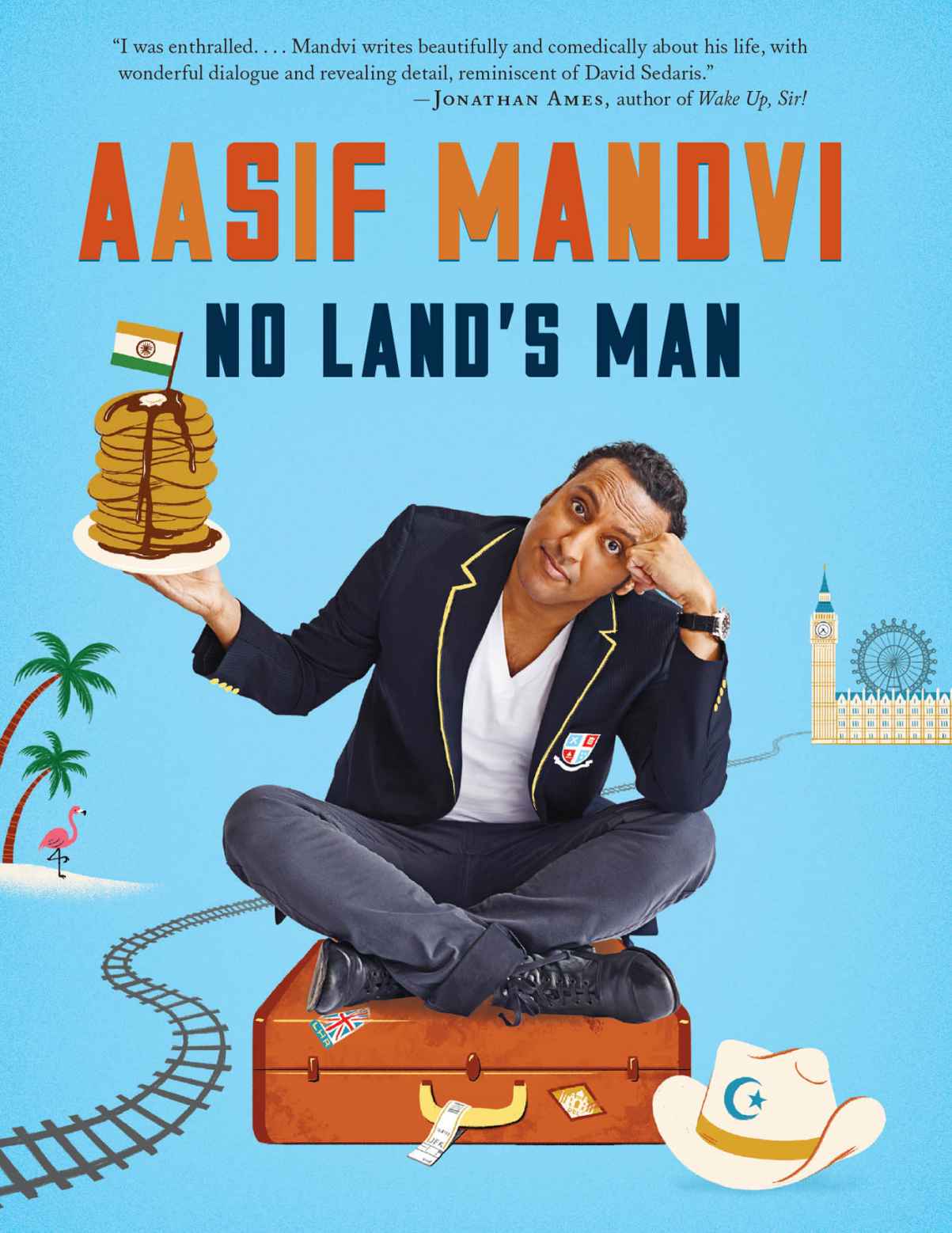 For my mother Fatima, who encouraged me to day dream
Also for Hakim and Shabana

DISCLAIMER
: Although the stories in this book are based on true events, the specific circumstances are often a blend of fact and imagination. Some of the names, identifying characteristics, and circumstances have been changed . . . sometimes for the better, but that’s just my opinion.

Text copyright © 2014 by Aasif Mandvi.
Front cover photograph copyright © 2014 Peter Ash Lee
All rights reserved. No part of this book may be reproduced in any form without written permission from the publisher.

No Land’s Man: You Can’t Be Michael Jackson All the Time
79

The Jihadist of Irony
179

M
Y FAMILY LEFT
the Northern English textile factory town of Bradford and moved to America in the early 1980s when I was sixteen years old. It happened so fast that I never really had a chance to say a proper goodbye to the place where I spent my childhood. As a teenager you tend to focus on the future rather than the past, and because my life after college and in New York was busy and full, I never had a desire to return. This actually might not come as a surprise to anyone who has ever lived in Bradford, for until my parents saved up enough to move us to the suburbs, we lived against the backdrop of factories, mills, graffiti-ridden tenement buildings, and run-down council estates. I remember the entire city looking like it was covered in soot.

However, sixteen years later, now living in New York and working as an actor, I had recently closed a successful run of my one-man show
Sakina’s Restaurant
1
, which I had written and performed
at the American Place Theater in New York City after several years of development. The play was critically well received and it ran for almost six months in the tiny black box theater below 46th Street. It was the culmination of several years of hard work for me, with write-ups in the
New York Times
and movie directors and VIP’s coming to see me perform. It was my first brush with success in a business that I had been struggling to make it in for almost a decade.

Through the process of workshopping the play, performing, and rewriting it, I managed to excavate what I thought was the story of my immigrant experience. As solo shows often are, it was a personal and cathartic performance and became a way for me to examine how my own issues of identity and dislocation had affected me.

As I performed the play every night, I had the sense that I had uncovered something that had lain dormant in me for a long time and I could not put it back to sleep. The play that I thought would put the pieces of my dislocated identity together, actually just shone a spotlight on the pieces that were missing and I realized after some time of denying it, that those pieces were back in Bradford.

I began to feel nostalgic for the city of my childhood. I thought about returning to the house that I grew up in, my middle school and boarding school, the reservoir where I went sledding as a child, my Dad’s corner shop and the makeshift little children’s theater where I first discovered my love of being a performer. This feeling came about suddenly and I couldn’t really understand it, or afford it, honestly. Traveling to England is expensive for anyone, especially someone making an off-Broadway theater actor’s salary.

My opportunity to return presented itself serendipitously a few months later.

After one of the performances, a screenwriter friend mentioned my show to the famed Indian film director Shekhar Kapur. Shekhar and I became friends and for a while thereafter he would buy me lunch whenever he was in New York. He also happened to be working with Andrew Lloyd Webber on what would later become the musical
Bombay Dreams
. During one of our lunches in New York he mentioned Sydmonton, a festival that Andrew put on every year at his country estate. Shekhar thought my show would be perfect for the festival and he told me that if I came out to England, he would set up a meeting. “It would be a wonderful addition and I’m sure Andrew would be very excited,” he said.

As I left the restaurant I marveled at the strange circumstance that was about to accompany my return to England. It felt somehow fated. I didn’t sing and the only Webber Musical I had ever seen was
Jesus Christ Superstar
so being invited back to England in this manner felt akin to being invited to Rome to meet with the Pope. You kind of have to stop making excuses and just go. Returning to England in this way also felt like a tremendous accomplishment. It would be a triumphant return, I thought! The little Indian kid from Bradford who was called a wog and chased home from the bus stop every night returning to perform his “toast of New York” play about being an Indian immigrant for the British aristocracy. I was pretty chuffed with myself as I walked around my apartment for several days singing, “Aasif Mandvi, Superstaaaaar! I’m going to be best friends with Lloyd Webbaaaar!”

Several weeks later I found myself sitting in the offices of The Really Useful Group, Andrew Lloyd Webber’s headquarters in London. His associate finally came back into the office with an apologetic look on his face.

“I am so terribly sorry,” he said, “but Andrew has to leave. He feels dreadful for making you wait, but something has come up and he has to dash. When do you leave to go back to New York?”

“The day after tomorrow,” I said, standing up and gathering my things.

I could tell from his tone that he had more important things on his plate than talking to some unknown actor from New York.

“Hope this wasn’t the only reason you came over to England” he said.

“No. No, of course not,” I said, somewhat unconvincingly. “I actually grew up in Bradford so I’m going to visit my hometown.”

There was an awkward pause after which he said, “Well, have a great trip, and let’s schedule it for another time, when you are back in the UK.”

“I will,” I said, knowing that would never happen.

He shook my hand and apologized again as he showed me the stairs to the street.

I went back to my bed and breakfast, packed my bags, and made my way to Kings Cross Station.

“The next train to Bradford,” I said to the lady at the ticket booth.

“Good curry in Bradford,” she replied.

“Yeah, that’s what I thought,” she said as she smacked her gum and pulled out a train schedule. “Bradford is full of your kind.”

“My kind?” I repeated tentatively, hoping she meant Bradford was full of strikingly handsome men.

“Yeah, you know,” she said nodding towards me. “Asians. Lots of Asians in Bradford.”

“Well, it’s been a long time,” I replied, not knowing what else to say.

“Homesick, then, are you?” she asked.

“Yes, something like that,” I replied, smiling. “I suppose I’m going to take a trip down memory lane.”

She smiled back and then looked pensive for a moment.

“I’m not sure I can recommend that,” she said as she handed me the train schedule. “Dangerous business, that is.”

“I suppose it can be,” I said as I dropped a few pounds under the window.

“Good luck,” she said. “I hope you find whatever you’re looking for.”

1
. The play
Sakina’s Restaurant
was originally directed and developed by Kim Hughes.

I spoke so quietly I don’t think he even heard me. But he was probably used to that. Wherever he went, I imagined, gasps of recognition followed, along with the sounds of people whispering his name or the titles of the movies he’d starred in. I didn’t care about them. Those people may have been fans, maybe wanting his autograph or to have their picture taken with him, but for me it was much more than that. I wasn’t just an admirer or a sycophant, someone who just wanted to flatter him because he was a big star. I didn’t even really want to engage him in a conversation about his career or about the challenges of working in Hollywood, blah blah blah. . . . He was so much more than that to me.

The best way to describe the way I felt about him would be to call it familial, like I was his offspring, metaphorically speaking, much the way Sidney Poitier was like a father figure to so many African-American actors. He had sown the seeds for myself and other brown actors hoping to work in Hollywood.

I said it again, a little louder and clearer this time, with confidence, supporting my voice with my diaphragm like I had been taught in acting school. I could feel my voice rising above the din of the Manhattan rooftop bar where I was serving drinks.

I spoke with an assurance I didn’t quite feel. He turned to me, finally realizing that a young waiter was addressing him, saying something other than “May I get you another?” He looked at me sharply, noting my timid, perhaps even dimwitted expression. I had surprised myself by my boldness, and apparently I had surprised him, too. The problem now, I realized, was that I had no plan of action for the moment after contact was made. And contact had been made. A smile began to form on his mouth, in his eyes, and even his cheekbones. I was a waiter who had interrupted the conversation of a celebrity VIP guest, which was a huge no-no. I could very easily be fired for my brazenness, but strangely, I didn’t care. I had seized the moment. I had connected with one of my idols. But what should I say or do next? I grinned like an idiot, unable to leave, unable to stay.

The Mermaid Chair by Sue Monk Kidd
Annie's Adventures by Lauren Baratz-Logsted
The Ninth Step - John Milton #8 (John Milton Thrillers) by Mark Dawson
Christmas Through a Child's Eyes by Helen Szymanski
The Trouble With Love by Beth Ciotta
The Biographer by Virginia Duigan
A Ring for Cinderella by Judy Christenberry
Falling for the Au Pair by Mia Petrova
Manipulation (June Hunt Hope for the Heart) by Hunt, June
Ricochet by Krista Ritchie, Becca Ritchie
Our partner