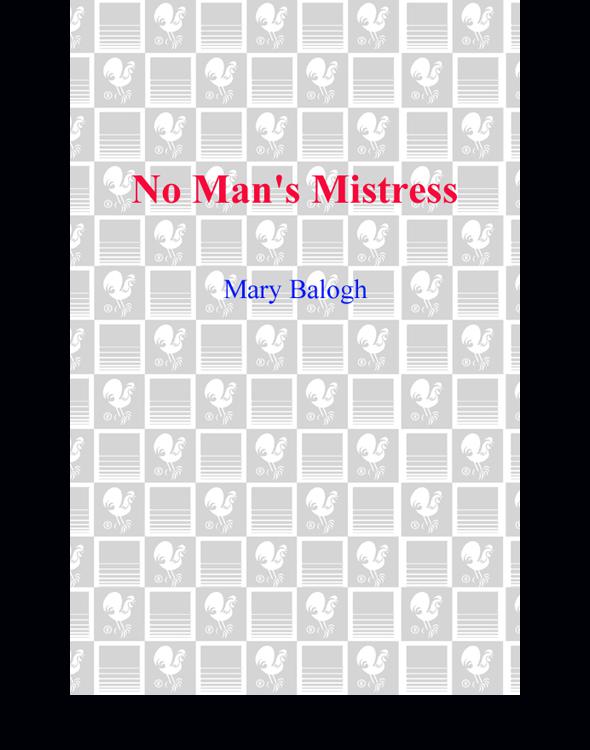 “Deep emotions, strong characters and an unusual plot blend to perfection into another winner for this Jewel of the Highest Water, Mary Balogh.”

MORE THAN A MISTRESS

“More Than a Mistress
is an irresistible story with the perfect hero and heroine, the brilliance of London high society, scandal and seduction, as well as a dash of humor here and there that make for a truly spellbinding and memorable romantic tale. Mary Balogh is a fabulous writer—like a fine wine, she just keeps getting better with time.”

“This romantic story is hilarious in spots with characters who are well-rounded and lovable.
More Than a Mistress
is a surefire winner from one of the genre's finest authors.”

“Mary Balogh is an exceptional talent. The complexity of her characters, the depth of their emotions and the romance and sensuality of her books are unsurpassed in the Regency genres and this book is no exception. A master craftswoman.”

A
LSO BY
M
ARY
B
ALOGH

A
S
UMMER TO
R
EMEMBER

T
HE
I
DEAL WIFE

T
he picturesque village of Trellick, nestled in a river valley in Somersetshire, was usually a quiet little backwater. But not on this particular day. By the middle of the afternoon it appeared that every villager and every country dweller for miles around must be out-of-doors, milling about the village green, enjoying the revelries.

The maypole at the center of the green, its colored ribbons fluttering in the breeze, proclaimed the occasion. It was May Day. Later, the young men would dance about the maypole with the partners of their choice, as they did with great energy and enthusiasm every year.

Meanwhile, there were races and other contests to draw attention to the green. Pitched about its perimeter were tented booths with their offerings of appetizing foods, eye-catching baubles, and challenging games of skill or strength or chance.

The weather had cooperated in magnificent fashion with warm sunshine and a cloudless blue sky. Women and girls had discarded shawls and pelisses they had
worn in the morning. A few men and most boys remained in their shirtsleeves after engaging in one of the more strenuous contests. Tables and chairs had been carried from the church hall onto the lawn outside so that tea and cakes could be served in full view of all the merriment. Not to be outdone, on an adjacent side of the village green the Boar's Head had its own tables and benches set up outside for the convenience of those folk who preferred ale to tea.

A few strangers, on their way past the village to destinations unknown, stopped off for varying periods of time to observe the fun and even in some cases to participate in it before continuing their journeys.

One such stranger was riding slowly down toward the green from the main road when Viola Thornhill glanced up from serving tea to the Misses Merrywether. She would not have seen him over the heads of the crowd if he had not been on horseback. As it was, she paused for a second, more leisurely look.

He was clearly a gentleman, and a fashionable one at that. His dark blue riding coat looked as if it might have been molded to his frame. His linen beneath it was white and crisp. His black leather breeches clung to his long legs like a second skin. His riding boots looked supple and must surely have been made by the very best of boot makers. But it was not so much the clothes as the man inside them who attracted and held Viola's appreciative attention. He was young and slim and darkly handsome. He pushed back his tall hat even as she watched. He was smiling.

“You ought not to be serving
us
, Miss Thornhill,” Miss Prudence Merrywether said, a customary note of anxious apology in her voice.
“We
ought to be serving
you
. You have been rushed off your feet all day.”

Viola reassured her with a warm smile. “But I am having so much fun,” she said. “Are we not fortunate indeed that the weather has been so kind?”

When she looked again, the stranger had disappeared from view, though he had not ridden on his way. His horse was being led away by one of the lads who worked in the inn stables.

“Miss Vi,” a familiar voice said from behind her, and she turned to smile at the small, plump woman who had touched her on the shoulder. “The sack race is ready to begin, and you are needed to start it and award the prizes. I'll take the teapot from you.”

“Will you, Hannah?” Viola handed it over and hurried onto the green, where a number of children were indeed wriggling into sacks and clutching them to their waists. Viola helped the stragglers and then directed them all as they hopped and shuffled into a roughly even line along the appointed starting point. Adults crowded about the four sides of the green to watch and cheer.

Viola had set out from home early in the morning looking ladylike and elegant in a muslin dress and shawl and straw bonnet, her hair in a neatly braided coronet about her head beneath it. She had even been wearing gloves. But she had long ago discarded all the accessories. Even her hair, slipping stubbornly out of its pins during the busy morning of rushing hither and yon, had been allowed finally to hang loose in a long braid down her back. She was feeling flushed and happy. She could not remember when she had enjoyed herself more.

“Get ready,” she called, stepping to one side of the line of children. “Go!”

More than half the racers collapsed at their very first leap, their legs and feet all tangled up in sacking. They struggled to rise, to the accompaniment of good-natured
laughter and shouted encouragement from relatives and neighbors. But inevitably there was one child who hopped across the green like a grasshopper and crossed the finish line before some of her less fortunate fellow contestants had recovered from their tumble.

Viola, laughing merrily, suddenly found herself locking eyes with the dark, handsome stranger, who was standing at the finish line, his own laughter emphasizing his extraordinary good looks. He looked her over frankly from head to toe before she turned away, but she discovered with pleased surprise that she felt amused, even exhilarated by his appreciation rather than repelled. She hurried forward to give out the prizes.

It was time then to hasten into the inn, where she was to judge the pie-baking contest with the Reverend Prewitt and Mr. Thomas Claypole.

“Eating pie is thirsty work,” the vicar declared more than half an hour later, chuckling and patting his stomach after they had sampled every pie and declared a winner. “And if my observations have been correct, you have not had a break all day, Miss Thornhill. You go over to the church lawn now and find a table in the shade. Mrs. Prewitt or one of the other ladies will pour you tea. Mr. Claypole will be pleased to escort you, will you not, sir?”

Viola could have done without the escort of Mr. Claypole, who because he had proposed marriage to her at least a dozen times during the past year appeared to believe that he had some claim on her and the right to speak plainly to her on any number of issues. The best that could be said of Thomas Claypole was that he was worthy—a solid citizen, a prudent manager of his property, a dutiful son.

“Forgive me, Miss Thornhill,” he began as soon as they were seated at one of the tables beneath the shade of a huge old oak tree and Hannah had poured their tea. “But you will not mind plain speaking from a friend, I daresay. Indeed, I flatter myself that I am more than a friend.”

“What criticism of a perfect day do you have, then, sir?” she asked, setting her elbow on the table and her chin in her hand.

“Your willingness to organize the fête with the vicar's committee and to work hard to see that it runs smoothly is admirable indeed,” he began, while Viola's eyes and attention drifted to the stranger, whom she could see drinking ale at a table outside the inn. “It can do nothing but earn my highest esteem. However, I have been somewhat alarmed to discover that today you look almost indistinguishable from any country wench.”

“Oh, do I?” Viola laughed. “What a delightful thing to say. But you did not mean it as a compliment, did you?”

“You are hatless and your hair is down,” he pointed out. “You have
daisies
in it.”

She had forgotten. One of the children had presented her with a bunch gathered from the riverbank earlier in the day, and she had pushed the stems into her hair above her left ear. She touched the flowers lightly. Yes, they were still there.

Wolfishly Yours by Lydia Dare
Finding the Perfect Man by Marie Higgins
The Drop Edge of Yonder by Rudolph Wurlitzer
Fused (Lost in Oblivion #4.5) by Cari Quinn, Taryn Elliott
Cemetery Silk by E. Joan Sims
Here Comes the Toff by John Creasey
Near To You by King, Asha
Yesterday's Hero by Jonathan Wood
Blessing in Disguise by Lauraine Snelling
Death Changes Everything by Linda Crowder
Our partner