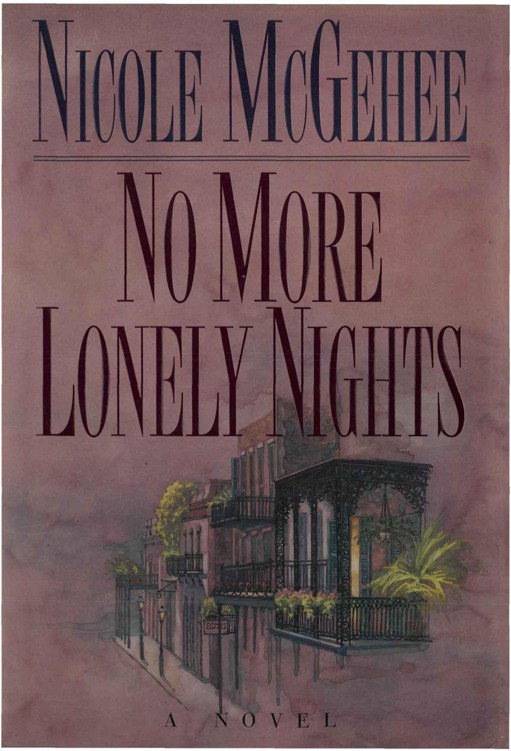 Regret Not a Moment

To my mother, for her stories;

to my grandmother, for the memories;

to my husband, just for love

“Dominique is strong, compelling, poignant… 4½ stars out of 5”

“This highly entertaining novel by the author of
Regret Not a Moment
will be devoured by patrons who enjoy Belva Plain, Barbara Taylor Bradford, or Cynthia Freeman. Recommended for fiction collections.”

“Author Nicole McGehee shines with this absorbing emotional drama which outlines the life of a complex woman who learns to face her challenges and feelings head on.”

—Iris Rainer Dart
author of
Beaches
and
The Stork Club

“The book’s main character is a strong, intelligent, witty and independent woman.”

This book would not have been possible without the help of my late mother, whose fascinating stories of her youth in Egypt inspired my imagination. She revealed far more than a daughter has a right to expect, though I’m sure there are still volumes that have not been told. I would also like to thank my late Aunt Odette and my very much alive Aunt Lucette, as well as my cousin, Viviane, for recalling their memories of Egypt — the way it was then.

DOMINIQUE had never loved Stephen so much as at that moment, when she knew she would never see him again.

As she approached the top of the gangplank, she pivoted on her high heels and searched the throng on shore, as if she would find him there. But the only familiar figure was that of her mother, Solange, who raised her hand in a regal salute. Dominique raised her own gloved hand in return, trying valiantly to make her wave jaunty. It was hard, though. She was only twenty-one and she was leaving behind… everything.

Her eyes panned the raucous harbor, trying to commit it to memory. Against a backdrop of once-grand buildings was a scene that would fit nowhere but the Middle East. White-robed porters shouted to each other as they hauled baggage to the ship. Pushcart vendors—each with an umbrella to keep out the blistering sun—hawked food, copper goods, and Oriental rugs to the milling crowd. Luxurious European cars blew their horns at the donkey wagons that jammed the road.

Amidst the dust, noise, and confusion, the immaculate white cruise ship that would take Dominique to her new life in America seemed strangely alien. As it swayed softly with the incoming tide, Dominique put a hand on the teak railing to keep her balance. She should board, she told herself, but still she lingered on the gangplank.

Dominique closed her eyes and inhaled deeply as the scent from a falafel cart wafted up to her. Would she ever again smell the familiar blend of cumin, hot oil, and pepper? Her throat tight with nostalgia, she opened her eyes for one last look.

Suddenly, her body grew rigid as her gaze locked on a man strolling a few yards from the ship—one of the ubiquitous khaki-uniformed soldiers who patrolled the waterfront. At once, Dominique pulled down the net veil of her hat and hurried up the gangplank.

A crew member dressed in crisp whites stepped forward to greet her. With a bow, he offered a steadying hand as Dominique stepped onto the polished deck. Then his eyes landed on the face beneath the veil. There was a barely perceptible pause. Until now, he hadn’t had a good look at her. Having seen her husband, he’d never expected someone so young—certainly not so striking. But it was verboten to stare at attractive passengers—especially when they were married. Recovering quickly, he gave her the deferential smile that he always accorded first class guests.

“Good morning, Mrs. Renard. Welcome aboard the
Golden Gate.”
He raised his voice to be heard over the celebratory crowd on board. Champagne corks popped and waiters rattled by with glasses and trays. Long, curly streamers sailed through the air and landed unnoticed on richly clad shoulders. Cries of “I’ll miss you! Don’t forget to write!” Enthusiastic waves to those on shore.

The handsome crewman leaned toward Dominique and said solicitously, “Your husband’s found a place for you at the rail, if you’d like to watch the departure.” He gestured toward the bow of the ship, farther away than the length of a football field. “Would you like someone to show you the way?” He pointed to a column of young men wearing red jackets with brass buttons—like bellhops in fine hotels. They stood at attention, waiting to escort passengers to their staterooms or relieve them of their bon voyage baskets.

Dominique smiled nervously. “Thank you, that won’t be necessary. I’ll find him.” The truth was she felt awkward at the prospect of being alone with the man she had married in a rushed ceremony two hours earlier. As she made her way past the gleaming expanse of polished brass and wood, she wondered about Anton. What would they talk about? She barely knew him.

We’ll manage, Dominique firmly told herself. We’ll be fine. She forced herself to focus on the pleasant excitement around her. The atmosphere was that of a huge, carefree party with hundreds of fascinating strangers. Dominique was already catching bits of conversation in French, English, Arabic, and Italian. She wondered if she and Anton would make new friends on board. She hoped so, for she knew no one in America other than her sister, Danielle.

Finally, Dominique spotted the back of her husband’s sleekly groomed gray head. She eased into the space beside him and murmured a greeting as she pulled a stream of confetti from the shoulder of her silk suit.

He turned to her with a welcoming expression. “You said your good-byes?” Anton Renard spoke to her in French, their native language.

Dominique nodded and returned his smile.

Anton squeezed her elbow in a proprietary way and leaned close. “Ready for your new life in San Francisco, darling?” He brushed a strand of her auburn hair from her face.

Without realizing it, Dominique inched away from him. “Of course!” She tried for enthusiasm. The feeling of strangeness would fade, she reassured herself. It had to. Anton was her future; it was time to let go of her past. Forget Stephen.

The earsplitting shriek of the ship’s klaxon broke into Dominique’s thoughts. She leaned against the rail and longingly focused on her mother as the
Golden Gate’s
crew pulled up the gangplank.

Solange Avallon waved, a majestic, controlled motion. Even in the heat of the Alexandria sun, she looked cool in her ivory linen suit. She carried in her gloved hands a parasol of matching fabric—nothing frilly for Solange. And it seemed the crowd around her sensed that it was in the presence of
someone.
No one jostled her. No one stood close to her. She commanded respect. Dominique studied her mother with a mixture of admiration and hurt. Why couldn’t Solange, just once, act as if she would miss her? What a contrast to Dominique’s tearful parting from Nanny. The old woman—more family than servant—had been too overcome with emotion to accompany Dominique to the ship. But if Solange experienced similar feelings, they didn’t show.

Heat stung the inside of Dominique’s eyelids. It was wrenching to leave her mother, even though their relationship had never been harmonious. She bit her lip and stifled her unhappy reflections. Instead, she tried to cheer herself by thinking of her sister. Danielle wrote that she loved America. Eight years before, she had moved to New York with her husband, Ronald Marks, an American officer she’d met on the Avallon family’s annual trip to France. Danielle’s engagement had been as sudden as Dominique’s. But then, Danielle had been in love with her husband.

Well, Dominique would learn to love Anton. She was grateful that he was taking her away from Egypt. She gave him a brief, sidelong glance, then once more turned to gaze at her mother.
Why
was Solange so determined to stay in Egypt after all that had happened? The country just wasn’t safe for Europeans anymore! But Solange insisted that she wasn’t worried. The deputy minister of Egypt himself was her protector. The ugly incident that was chasing Dominique into exile was an aberration, and Solange would simply be more cautious from now on. Still, she had insisted that Dominique go. And what reason was there to stay, since there was no future with Stephen?

Dominique looked guiltily at her husband, as though he could read her thoughts. But he was absorbed in conversation with the man on the other side of him. So, for just a moment—for the very last time, she vowed—Dominique closed her eyes and allowed herself to succumb to her memories. Memories of Egypt. Memories of Stephen.

DOMINIQUE’S present to herself on her twenty-first birthday was to apply for a job with the Royal Air Force. All her friends worked for the British.

“You’ll practice your English,” said the serious-minded ones.

“You’ll meet so many handsome officers!” said the rest.

Not that anyone Dominique knew
had
to work. In fact, her mother vehemently opposed the idea.

“What do you mean
work?”
Solange demanded in French as they wended their way through the rose garden that dominated their walled back yard. Looped over her left arm was a round, flat basket that she used for cut flowers; in her right hand, a pair of shears. Now she waved the shears in a gesture of dismissal. “Women in the Avallon family don’t work! When your father died, he left us very well provided for.”

Dominique unconsciously turned and looked back at her family’s imposing Belle Époque home. It was in the Garden City district of Cairo—a neighborhood of quiet, shady streets, vast lawns, and high walls; an enclave built by Europeans to remind them of the elegant world they had left behind in the grand capitals of the Continent.

The Avallons’ closest neighbor was the Italian embassy. A block away was the British embassy. But neither outshone the Avallon house, with its long windows, high ceilings, and marble corridors. The home was a monument to all that was graceful in French architecture.

And though Henri Avallon had been dead twelve years, the house was maintained as perfectly as it had been during his lifetime, thanks to Solange’s watchful supervision of a retinue of well-trained servants.

Dominique turned back to her mother with an absent expression.

Solange gave her a look of exasperation. “Oh, for heaven’s sake, it’s much too hot to stand here and discuss this! We’ll go into the courtyard.” Solange turned and strode decisively up the brick path. Dominique stared after her mother, then, bracing herself, hurried to catch up.