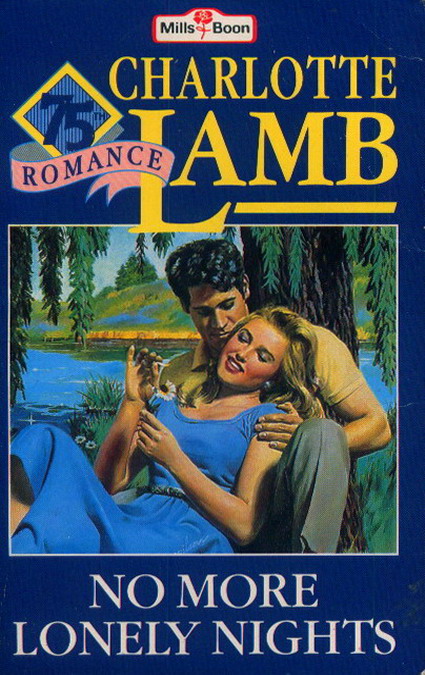 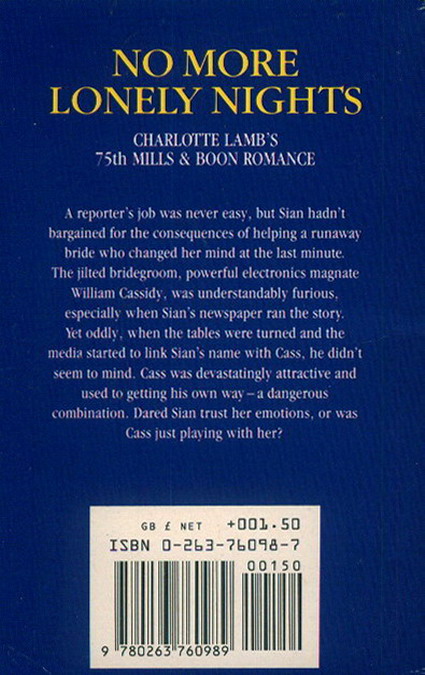 Sian heard a rustle as Cass’s long fingers tightened on the pages, and bit her lip in apprehension.

He suddenly flung the paper across the table. ‘I ought to wring your neck!’ he grated. ‘You’ve made me sound like some sort of ogre.’

‘I just wrote what Annette had said.’

His face darkened. ‘Annette’s known me most of her life—ever since she was a toddler, in fact. For heaven’s sake, she was going to marry me. Even if she changed her mind, she can’t have hated me enough to talk about me as if I… and to a total stranger, too!’

Sian watched him with anxious sympathy. She had never had to face anyone she had written about in that intimate way. It put her job into a new perspective for her. She had hurt this man! She bit her lower lip, watching him uneasily. Suddenly she saw his body slacken from the tense rage that had held it.

‘Stop looking at me like that!’ he said softly, in a very different tone, and Sian lifted her lashes, and widened her eyes at him in query.

‘How was I looking at you?’

His stare held an amused intimacy that made her heart skip a beat. ’
You
are a very annoying woman,’ he drawled.

Books you will enjoy

Anna knew that men like Laird Montgomery were dangerous. But, however hard she tried to avoid him, their paths seemed destined to cross. She had to admit that she didn’t entirely mind— until she found out that she couldn’t trust him…

Zoe had been hurt by Rory Ormond before, and she was determined to stop the same thing happening to another young girl. She believed she had got over their affair and was strong enough to thwart Rory’s plans without danger to her own emotions. Until she met him again…

When she was marooned in her fog-bound cottage with an infuriatingly mocking man, Liza’s well-ordered emotions threatened to let her down. Despite his attraction, Liza was determined to resist Keir Zachary, sure that it was all a game to him. But it was a game that could consume them both in its passionate flames…

YOU CAN LOVE A STRANGER

Maddie was content with her quiet life as a radio disc jockey in the seaside town of Seaborough— until a stranger called Zachary Nash, with his velvet voice, embroiled her in a tangle of joys and hurts she couldn’t see a solution to…

“This morning, I’ve read my post, drunk a coffee and waved to the dustman staggering off with another sack of my discarded manuscripts.

I am a working writer. Translated, that means I leap on any excuse not to work. I have 5 children, from grown up down to teenage twins, a husband, who would never forgive me if I told you how old he was, and a Cavalier spaniel who takes me for long walks.

I used to live in London, my home town, and still miss the shops, the bustle of the streets, the cinemas and theatres. Now I live on the tranquil Isle of Man. My house is Edwardian—red tiled roof, white walls—set in a large garden looking over the sea, which gives me another excuse for not working. Watching the sea change colour can take up hours.

Don’t get me wrong—writing has its advantages, too. I travel more than I could ever afford to before; fourteen countries in one year! I can read Mills & Boon all day and claim I’m working—after all, I have to keep up with the latest trends, don’t I? (Well, my children make sarcastic noises over this excuse, but my accountant accepts it!) I also make a lot of new friends when I talk to societies and writing circles or get letters from other writers. Answering them is yet another of my excuses.

Sooner or later, though, I have to go to that typewriter—and then the daily miracle happens. Once I force myself to start writing, the story runs away with me and I forget everything else. When people ask me (as they do!) “How do you do it?” I can never give an answer because I simply don’t know how it happens. The flow of words begins, the characters come to life and make things happen around them, and I find my fingers falling over themselves trying to get it all down on paper before it vanishes.

That’s why my house groans beneath the weight of my own books. When I realise that I’ve written my seventy-fifth for Mills & Boon, I have to pinch myself, though. When did I ever find the time?”

Sian did not have second sight, or she would never have said on the phone to her editor that morning, ‘I’m going to have a slow, peaceful drive back to London today and I’ll see you at work on Monday. I’m still on holiday, and I am not working this weekend, whatever you say, Leo, so forget it.’

‘But you’ll driving right by the place,’ he had protested in his rational, coaxing fashion. ‘It wouldn’t take you long.’

‘You never give up, do you?’ Her voice was wry, affectionate, but firm. She wasn’t letting Leo talk her into anything. ‘I am on holiday, Leo. I won’t cover this wedding for you. Got it? Anyway, I’m in no mood to go to a wedding.’

‘I see,’ he murmured infuriatingly in a voice loaded with meaning.

‘What do you see?’ she snapped, which was a mistake, she shouldn’t have let him see she picked up the implication.

‘Love-life still hurting?’ he asked sympathetically, and her teeth met.

She hung up before he could come back with anything else, and stared into space for a moment, fuming. Were they all still gossiping at the paper? She thought they had forgotten it by now; she and Louis were an old item, surely? It was weeks since they had split up, after all, and Sian was sure she was over him. She hadn’t thought about him much during her holiday. She had been enjoying herself too much; she hadn’t given herself time to brood over past mistakes and she wished Leo hadn’t reminded her now. People should have found other things to talk about, but the trouble with having lots of friends, or working in a big organisation, was that people took far too close an interest in your private life and felt quite free to comment on it, either to your face of behind your back. Sian hated being talked about. It put her back up. Her life was her business and nobody else had a right to an opinion about it, she thought, glowering, as she set about packing to go back to London.

It didn’t take her long. She hadn’t brought much; just jeans and shorts and a lot of cotton shirts and T-shirts. She had long ago learnt how to travel light; travelling was part of her job. She lived with a suitcase ready packed; she never knew when Leo would despatch her to some remote corner of the British Isles. That was part of the fascination of the work; Sian had always been excited by the glamour, the roving, gypsy-like nature of a reporter’s life. She would hate to be in an office all day, doing nothing but staring out of the window as the rest of the world went by.

It was really her job that had wrecked her relationship with Louis, of course. She was always going away, spending time in hotels with other men, as he saw it; and when she was around she was often tired, she used up too much energy elsewhere to have much to spare for a man.

She and Louis had begun to argue, then to quarrel. When he started on the ‘Choose! Me—or your job!’ theme that was more or less it. The affair had died out in one violent explosion on both sides. Now that she had cooled down she could see it from his angle and didn’t blame him. No man wanted his woman constantly vanishing, always preoccupied. Louis had known what she should have known, that she was more interested in her work than she was in him.

He was seeing someone else, she had heard lately, and that had stung for a second, but she wouldn’t be a dog in a manger about Louis. At the same time, she couldn’t herself face getting involved with another man; Louis had taught her that she wasn’t yet ready for a serious affair, or to give herself entirely to loving anyone, and that was sad, too; that did worry her.

She felt much happier now, though, after a week sailing at Poole, staying with cousins who lived in a delightful harbour cottage. Sian had been weary and irritable when she’d arrived; but she was returning in a very different mood: tanned and relaxed, her green eyes tranquil, after days of physical hard work and mental rest on sun-dappled water. The weather had been perfect—just enough wind, not too much heat. She had been out every day from dawn to dusk, her blonde hair looped up in a ponytail, her shirt and shorts leaving enough of her figure exposed to give her a glowing tan. It had been just what she needed.

Playing with Piper (Menage MfM Romance Novel) (Playing for Love Book 3) by Tara Crescent
Un-Break my Heart: Book 2 (The Heart Trilogy) by Audrina Lane
Royal House of Shadows Box Set: Lord of the Vampires\Lord of Rage\Lord of the Wolfyn\Lord of the Abyss by Showalter, Gena, Monroe, Jill, Andersen, Jessica, Singh, Nalini
A Night Without Stars by Peter F. Hamilton
My Lost and Found Life by Melodie Bowsher
Dangerous: Made & Broken (A British Bad Boy Romance) by Nora Ash
Peluche by Juan Ernesto Artuñedo
Down and Dirty (Sons of Sinners Book 1) by Erika Reed
Amazing Tales for Making Men Out of Boys by Oliver, Neil
Night Magic by Emery, Lynn
Our partner