Read No Name in the Street (Vintage International) Online

No Name in the Street (Vintage International) 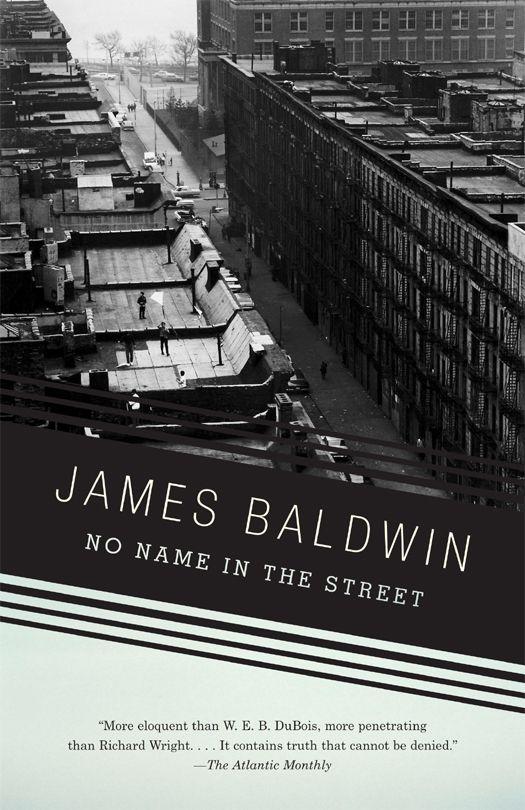 Cataloging-in-Publication Data is on file at the Library of Congress.

take me to the water
to be baptized

His remembrance
shall perish from the earth
and He shall have
no name in the street.
He shall be driven from light
into darkness,
and chased out of the world.
Job 18:17-18

I’d tear this building down.

If I had-a- my way, little children,

I’d tear this building down.

Just a little while to stay here,

Just a little while to stay.

take me to the water

“That
is
a good idea,” I heard my mother say. She was staring at a wad of black velvet, which she held in her hand, and she carefully placed this bit of cloth in a closet. We can guess how old I must have been from the fact that for years afterward I thought that an “idea” was a piece of black velvet.

Much, much, much has been blotted out, coming back only lately in bewildering and untrustworthy flashes. I must have been about five, I should think, when I made my connection between ideas and velvet, but I may have been younger; this may have been the same year that my father had me circumcised, a terrifying event which I scarcely remember at all; or I may think I was five because I remember tugging at my mother’s skirts once and watching her face while she was telling someone else that she was twenty-seven. This meant, for me, that she was virtually in the grave already, and I tugged a little harder at her skirts. I already knew, for some reason, or had given myself some reason to believe, that she had been twenty-two when I was born. And, though I can’t count today, I could count when I was little.

I was the only child in the house—or houses—for a while, a halcyon period which memory has quite repudiated; and if I remember myself as tugging at my mother’s skirts and staring up into her face, it was because I was so terrified of the man we called my father; who did not arrive on
my
scene, really, until I was more than two years old. I have written both too
much and too little about this man, whom I did not understand till he was past understanding. In my first memory of him, he is standing in the kitchen, drying the dishes. My mother had dressed me to go out, she is taking me someplace, and it must be winter, because I am wearing, in my memory, one of those cloth hats with a kind of visor, which button under the chin—a Lindbergh hat, I think. I am apparently in my mother’s arms, for I am staring at my father over my mother’s shoulder, we are near the door; and my father smiles. This may be a memory, I think it is, but it may be a fantasy. One of the very last times I saw my father on his feet, I was staring at him over my mother’s shoulder—she had come rushing into the room to separate us—and my father was not smiling and neither was I.

His mother, Barbara, lived in our house, and she had been born in slavery. She was so old that she never moved from her bed. I remember her as pale and gaunt and she must have worn a kerchief because I don’t remember her hair. I remember that she loved me; she used to scold her son about the way he treated me; and he was a little afraid of her. When she died, she called me into the room to give me a present—one of those old, round, metal boxes, usually with a floral design, used for candy.
She
thought it was full of candy and
I
thought it was full of candy, but it wasn’t. After she died, I opened it and it was full of needles and thread.

This broke my heart, of course, but her going broke
it more because I had loved her and depended on her. I knew—children
must
know—that she would always protect me with all her strength. So would my mother, too, I knew that, but my mother’s strength was only to be called on in a desperate emergency. It did not take me long, nor did the children, as they came tumbling into this world, take long to discover that our mother paid an immense price for standing between us and our father. He had ways of making her suffer quite beyond our ken, and so we soon learned to depend on each other and became a kind of wordless conspiracy to protect
her
. (We were all, absolutely and mercilessly, united against our father.) We soon realized, anyway, that she scarcely belonged to us: she was always in the hospital, having another baby. Between his merciless children, who were terrified of him, the pregnancies, the births, the rats, the murders on Lenox Avenue, the whores who lived downstairs, his job on Long Island—to which he went every morning, wearing a Derby or a Homburg, in a black suit, white shirt, dark tie, looking like the preacher he was, and with his black lunch-box in his hand—and his unreciprocated love for the Great God Almighty, it is no wonder our father went mad. We, on the other hand, luckily, on the whole, for our father, and luckily indeed for our mother, simply took over each new child and made it ours. I want to avoid generalities as far as possible; it will, I hope, become clear presently that what I am now attempting dictates this avoidance; and
so I will not say that children love miracles, but I will say that I think we did. A newborn baby is an extraordinary event; and I have never seen two babies who looked or even sounded remotely alike. Here it is, this breathing miracle who could not live an instant without you, with a skull more fragile than an egg, a miracle of eyes, legs, toenails, and (especially) lungs. It gropes in the light like a blind thing—it
is
, for the moment, blind—what can it make of what it sees? It’s got a little hair, which it’s going to lose, it’s got no teeth, it pees all over you, it belches, and when it’s frightened or hungry, quite without knowing what a miracle it’s accomplishing, it exercises its lungs. You watch it discover it has a hand; then it discovers it has toes. Presently, it discovers it has
you
, and since it has already decided it wants to live, it gives you a toothless smile when you come near it, gurgles or giggles when you pick it up, holds you tight by the thumb or the eyeball or the hair, and, having already opted against solitude, howls when you put it down. You begin the extraordinary journey of beginning to know and to control this creature. You know the sound—the meaning—of one cry from another; without knowing that you know it. You know when it’s hungry—that’s one sound. You know when it’s wet—that’s another sound. You know when it’s angry. You know when it’s bored. You know when it’s frightened. You know when it’s suffering. You come or you go or you sit still according to the sound the baby makes. And you watch over it
where I was born, even in your sleep, because rats love the odor of newborn babies and are much, much bigger.

By the time it has managed to crawl under every bed, nearly suffocate itself in every drawer, nearly strangle itself with string, somehow, God knows how, trapped itself behind the radiator, been pulled back, by one leg, from its suicidal investigation of the staircase, and nearly poisoned itself with everything—
its
hand being quicker than
your
eye—it can possibly get into its mouth, you have either grown to love it or you have left home.

I, James, in August. George, in January. Barbara, in August. Wilmer, in October, David, in December. Gloria, Ruth, Elizabeth, and (when we thought it was over!) Paula Maria, named by me, born on the day our father died, all in the summertime.

The youngest son of the New Orleans branch of the family—family, here, is used loosely and has to be; we knew almost nothing about this branch, which knew nothing about us; Daddy, the great good friend of the Great God Almighty, had simply fled the South, leaving a branch behind. As I have said, he was the son of a slave, and his youngest daughter, by his first marriage, is my mother’s age and his youngest son is nine years older than I. This boy, who did not get along with his father, was my elder brother, as far as I then knew, and he sometimes took me with him here and
there. He took me into the Coney Island breakers on his back one day, teaching me to swim, and somehow ducked beneath me, playing, or was carried away from me for a moment, terrified, caught me and brought me above the waves. In the time that his body vanished beneath me and the waters rolled over my head, I still remember the slimy sea water and the blinding green—it was not green; it was all the world’s snot and vomit; it entered into me; when my head was abruptly lifted out of the water, when I felt my brother’s arms and saw his worried face—his eyes looking steadily into mine with the intense and yet impersonal anxiety of a surgeon, the sky above me not yet in focus, my lungs failing to deliver the mighty scream I had nearly burst with in the depths, my four or five or six-year-old legs kicking—and my brother slung me over his shoulder like a piece of meat, or a much beloved child, and strode up out of the sea with me, with me! he had saved me, after all, I learned something about the terror and the loneliness and the depth and the height of love.