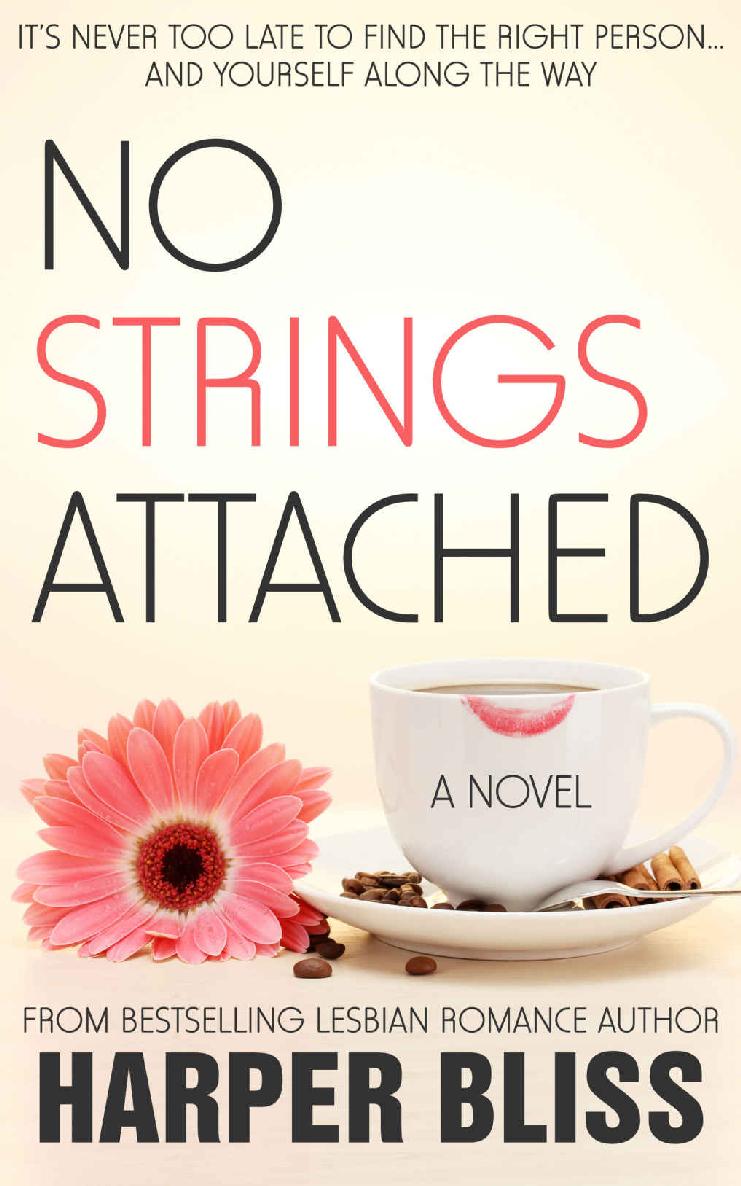 All rights reserved. This is a work of fiction. Any resemblance of characters to actual persons, living or dead, is purely coincidental. The author holds exclusive rights to this work. Unauthorized duplication is prohibited.

Get two books FOR FREE

Sign up for the author’s newsletter and get
HIRED HELP
and
SUMMER’S END
for free.

Details can be found here:
harperbliss.com/freebook

For everyone who is in the closet.

I hope you find a good way out.

“To one year of freedom.” Amber held up her cup of green tea.

Micky stared into her latte and shook her head. “Let’s not toast to that.” She looked up and found Amber’s eyes. “Freedom’s overrated.”

Amber cocked her head. “What’s wrong with you today? This is not the effect my yoga class is supposed to have.” She kept holding up her mug.

Micky averted her glance. Amber was always beaming with positive energy and obvious physical and mental health. Some days, it was just too much. “I’m not saying I’m not happy that my divorce became official exactly one year ago, but I don’t have that much to show for it. This yoga session is the highlight of my week. My children don’t need me anymore, which they keep reminding me of at every turn. I had foolishly believed my life would become better after leaving Darren, but it doesn’t feel that way.”

“You’re still finding your feet. And Olivia and Christopher do still need their mother very much. They’re still getting used to the situation as well. Think long-term, Micky.”

“Well, I definitely don’t want to get back with Darren, I just… feel so empty, so meaningless. My days are filled with literally doing nothing.”

“They’re filled with the exact same activities as before the divorce. It’s just your perspective that’s different,” Amber said.

Amber was a good friend to have, but her spiritual mumbo jumbo did irritate Micky at times like these. Micky could also do with a glass of New Zealand sauvignon blanc much more than this latte.

Micky shrugged as Kristin, The Pink Bean’s owner, headed in their direction.

Micky let Amber reply to that question. Amber explained how she’d had her students stay in pigeon pose for longer than usual and asked Kristin when she was going to join again.

“As soon as I find a new employee.” She thrust a sheet of paper in Micky’s direction. “Are your children old enough to have an after-school job?”

“
My
children?” Micky bristled. “Actually work for pocket money?” She feigned an exaggerated laugh, then clasped a hand to her chest. “It’s my own fault. I spoiled them too much.”

“How about you, Micky?” Amber’s voice rose.

“Me what?” Micky stared at the text on the piece of paper.
Barista wanted. Being upbeat is much more important than being experienced.

“You’re looking for something to do with your time. Why don’t you apply?” Amber looked at Kristin, possibly for words of encouragement, but Kristin had a business to run so why would she hire a washed-up divorcée like Micky? And why would Micky take a job in the first place?

“It could be fun,” Kristin weighed in. “You come in here every day, anyway. I’ll show you the ropes.”

“Me?” Micky leaned back. “Work at The Pink Bean?” The idea sounded ludicrous to her. “I don’t know the first thing about making complicated cups of coffee like this.”

“You’re an expert at drinking them, though,” Amber offered.

“Think about it.” Kristin shot Micky an encouraging smile, then walked off and pinned the sheet of paper on the notice board by the door.

“Why did you say that in front of her?” Micky gave Amber a wry look.

“You know me, Michaela, I’m always only trying to help.”

It was infuriating, but true. “Can you imagine me serving coffee at The Pink Bean?”

“Why not? You were just telling me about how empty you feel inside. You basically said you’re bored. Working here for a few hours a day can change that. You’d meet new people. You wouldn’t be alone. And you can take my evening classes. They’re a bit fuller, but I’ll still pay special attention to you.” Amber drew her lips into that wide smile of hers. A ginger curl had escaped from her ponytail and danced along her temple as she nodded.

“But”—and Micky was embarrassed to admit this—“I haven’t worked a day in my whole life.”

“What are you talking about?” Amber’s voice rose again. For a yoga teacher, she really had problems keeping her voice level in social situations. “You raised two children. You made a home for them and for your ex-husband. It’s not because you don’t get paid for it that it isn’t a job—and a tough one at that.”

“If you put it that way.” Was Micky actually starting to consider this crazy idea? What did she really have to lose apart from a few hours of her time, which she didn’t do anything useful with, anyway. “But I’ve certainly never had a boss before.”

“You live with two teenagers. No boss can be worse than that. Besides, Kristin is a pussycat.” Amber let her gaze slide to the counter where Kristin was chatting to a customer. “Remember that time I hit on her because she was always alone in here and I read it all wrong and I assumed she was single?”

Micky nodded. “How could I forget when you remind me every few months?”

“She let me down so gently. It was the easiest rejection I ever experienced. She even offered me a free cup of tea, which I didn’t accept, of course.”

Micky had heard the story of Amber’s failed crush on Kristin many a time since The Pink Bean had opened two years ago. Since then, they’d met Kristin’s wife Sheryl, a professor at the University of Sydney, and Amber had successfully gotten over her crush.

“What will my kids think of their mother working at a coffee shop called The Pink Bean?” No matter what she did, Micky’s hormonal teenagers would disapprove noisily for an instant, then retreat back into the silence they wrapped themselves in with their oversized headphones on their heads and their blinking screens in front of their eyes.

“They won’t mind, and it doesn’t matter.” Amber fixed her gaze on Micky’s, as though wanting to say something with her intense stare.

“You’ve let it slip that you might be open to… exploring more. This is a great place to start.”

“Don’t play innocent with me now. I’m your best friend. Have been for a very long time. I’ve seen your gaze wander. Besides, you’ve told me in no uncertain terms.”

“On a day like today especially, on the first anniversary of your divorce, I think you should take action. Not just symbolic action. Real action. Make a change. Take a step forward.”

At least Amber was letting go of the innuendo. “I’ll sleep on it, I promise.”

Amber nodded, then slanted her torso over the small table. “I know it wasn’t the actual reason for the divorce, because there’s never only one reason, but I know you’re curious. It’s time to put yourself out there.”

Only Amber could say something like that and have the most endearing, non-smug look on her face as she leaned back.

“When will
you
put yourself out there again?” Micky countered.

“I have,” Amber was quick to say, then scrunched her lips together. “You know I have, I just haven’t met the right woman yet.”

“Maybe you’re frequenting the wrong places and hanging out with the wrong kind of people.” Micky was still a little unsettled by what Amber had just implied.

“You mean The Pink Bean and you?” Amber narrowed her eyes. “Never.”

Micky looked around the cozy coffeehouse just round the corner from her new home—from her new life. She’d been living in the Darlinghurst area for only a few months, and had chosen this quickly gentrifying neighborhood at Amber’s insistence. Amber claimed Micky couldn’t hide herself away in the suburbs of Mosman anymore, not even if it meant that Olivia and Christopher would have much smaller bedrooms to sulk in.

Kristin gave her a quick wave from behind the counter. Micky tried to imagine herself behind it.

Should she take the leap?

When she’d gone hunting for a new pad, Micky had fallen in love with the second house the real estate agent had shown her. Her children, not so much. The biggest trade-off when they had swapped Mosman for Darlinghurst had, in the end, not been the size of the bedrooms but the fact the new house only had one bathroom they all had to share. On school days, Micky had no problem letting Olivia and Christopher take their showers first, the latter never spending more than five minutes in there anyway, while she made them breakfast and attempted—mostly in vain—to get them to eat it.

“I’ll have an apple on the bus” was Olivia’s standard reply, while Christopher would eat one forkful of the scrambled eggs she’d made, mumbling, “Mmm, good, Mom,” just to placate her, after which he probably wolfed down a Snickers bar. Micky found the wrappers everywhere.

Today, though, Micky needed to be at The Pink Bean at seven thirty—“Just to observe on your first morning shift,” Kristin had assured her—and she was impatiently waiting for Olivia to exit the bathroom. This reinforced the thought that this whole thing was an awful idea in the first place. She was forty-four years old. She’d been married to Darren Steele for a whopping eighteen of those—she’d given him her prime. What was she doing starting work at a coffee shop where, at least once a week, an LGBT activity took place?

Micky remembered the double-take she had done when Amber had first brought her there just after it opened.

“Must it really be so blatantly obvious?” she had asked, not caring how that made her come across. Her marriage had been in the final stage of its existence and what if someone she knew ran into her at a coffeehouse called The Pink Bean. Why couldn’t it just be called The Bean? And now she was going to work there—or at least attempt to. What did that say about her?

Her kids, who had become regulars at The Pink Bean as well, often going in after school for a muffin or an iced tea, didn’t seem to be disturbed by the Pink aspect of The Bean when she told them about her plans. They’d mostly scoffed and said, “You, Mom? Serve people coffee? Why?”

Micky had explained that she needed something to do with her time, now that they obviously didn’t need her that much anymore.

“But why do that?” Olivia had asked. “Can’t you volunteer at a soup kitchen or something, like other moms?”

Micky had postponed and postponed her decision to leave Darren. She’d wanted to stay until both her children were at university, but Olivia was only twelve at the time and the six years it would take for her to graduate high school seemed like a lifetime.

Murder in Belleville by Cara Black
Tainted by K.A. Robinson
The Neon Rain by James Lee Burke
The Angel's Covenant (The Covenant series) by Landes, Lynn
Shoulder the Sky by Anne Perry
Someone's Watching by Sharon Potts
Hemlock Bay by Catherine Coulter
The Little Flower Shop by the Sea by Ali McNamara
The Dimension Travel Trilogy: A Three Part Science Fiction And Fantasy Novel by Pidoriano, Joseph
They May Not Mean To, but They Do: A Novel by Cathleen Schine
Our partner