Read Not Even for Love Online

Not Even for Love 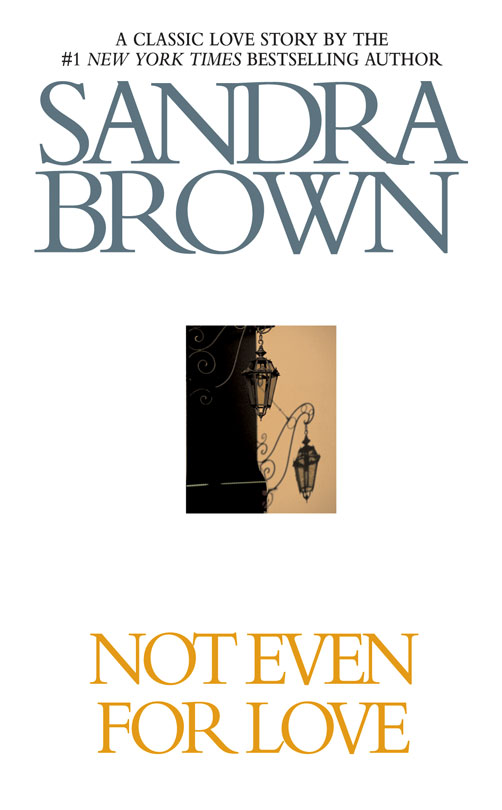 Not Even for Love

A Treasure Worth Seeking

For years before I began writing general fiction, I wrote genre romances.
Not Even for Love
was originally published about twenty years ago.

This story reflects the trends and attitudes that were popular at that time, but its themes are eternal and universal. As in all romance fiction, the plot revolves around star-crossed lovers. There are moments of passion, anguish, and tender-ness—all integral facets of falling in love.

I very much enjoyed writing romances. They’re optimistic in orientation and have a charm unique to any other form of fiction. If this is your first taste of it, please enjoy.

T
he man finished the champagne in the fragile crystal stem and set it on the silver tray deftly held aloft by a passing servant. The tuxedoed waiter paused momentarily for the man to avail himself of another glass of the bubbly wine, then disappeared into the chattering crowd.

Reeves Grant sipped at his fresh glass of champagne, wondering why he had even taken it. He didn’t want it. Everything had suddenly gone sour. Even the world’s most expensive vintage left a brassy taste in his mouth. Derisive green eyes swept across the august assembly of celebrities and VIPs, surveying it with tolerant boredom.

An aging but still beautiful French film star was strategically draped on the arm of her new husband, an oil tycoon from Tulsa, Oklahoma. West Germany’s gold–medal– winning Olympic downhill racer was earnestly hustling a sulky, sensuous princess from a Mediterranean country, but she studiously ignored him. A New York designer and his “companion and protégé,” both dressed in flaming pink tuxedoes, were entertaining a group of avid listeners with a malicious tale about a former cover girl model who had gained forty pounds and had come to them for a figure-camouflaging wardrobe.

All in all, the crowd were rich, famous, or important. Or a combination of all three. Or merely outrageously notorious for one reason or another.

Greeting them all with dignified graciousness was the host of the lavish reception. Tall, strong, and lithe of figure, he looked to be exactly what he was, a Swiss industrialist of incalculable wealth. His blond, blue-eyed good looks secured his position on the list of the world’s “beautiful people.”

Disobedient green eyes refused a cerebral command and unerringly moved to the woman standing beside the millionaire. She was dressed in a stunning white gown.
White
, for God’s sake! he thought snidely.

Twenty-four hours hadn’t dimmed Reeves Grant’s memory of how beautiful she was. The one-shoulder Dior sheath was worthy competition for any other gown there. The opal and diamond necklace around her slender throat was as exquisite as any of the jewelry that bedecked the other women in the room, and its simplicity was almost virtuous by comparison.

Her hair came close to being styled too casually for the formal occasion. It wasn’t loose and flowing as Reeves had last seen it. Instead it was swept up into a knot at the top of her head. But the secreted pins seemed to have a tenuous hold on those dark, thick, glossy strands, a few of which had already escaped their confines. With the least amount of encouragement—say, a man’s caressing fingers—the whole mass would probably come tumbling down around his lucky hand.

Dammit! What the hell is the matter with you? he demanded of himself. He had been suckered, but good. Yet, like some masochistic fool, he couldn’t keep his eyes away from her. The question kept repeating itself in his brain: What had she been doing in that bookshop last night? Or better still, what was she doing
here?
Among all this? These people? With that man? The tiny modest apartment over the bookshop and this palatial reception room with its frescoed and gilded ceiling, its marble floors, its glittering chandeliers, had nothing to do one with the other. She didn’t belong here. She belonged in that infinitesimal kitchen with its cheery percolator and the smell of fresh coffee. He could still see her curled up in the corner of that short sofa, one of the comfortable pillows hugged to her breasts… Damn!

Leaving the dregs of the champagne, he set the glass on a small table. His Nikon camera hung around his neck by its thin leather cord, and he adjusted it now. He was so accustomed to the camera being like an extension of himself that it didn’t seem incongruous with his evening clothes. The crowd, well used to being photographed, seemed not to notice the camera either as Reeves threaded his way through them, his eyes intent on the cameo profile of the woman as she shook hands with a Belgian diplomat. The man at her side had just introduced him to her.

She leaned over the man several inches shorter than herself and spoke courteously to him, though her words eluded Reeves as he brought the camera up to his expert eye. He adjusted the ring around the lens until the delicate features of her face sprang into focus.

She was accepting the diplomat’s officious kiss on the back of her hand when the photographer snapped the shutter. The automatic flashing device on his camera startled her, and she turned her head in the direction from which it had come. Quickly, he rolled the focus ring again as her face now filled his lens. Her smile was tentative, shy, and self-conscious as he pressed the shutter release.

This time the flash hit her full in the eyes and she was momentarily blinded. A dark forest of lashes blinked over gray eyes several times before she could clearly see. The photographer slowly lowered the camera away from his eyes, green eyes that impaled her with a ferocious, accusatory glower.

Her gracious smile froze for an instant before it totally collapsed. The eyes widened perceptibly. The mysterious rings around the irises grew darker. A darting pink tongue flicked over lips suddenly gone dry. Then the lips formed a small, round, surprised O.

Reeves had seen that same expression of wonder and caution just last night. It had been raining. The thunder had echoed through the narrow alleys and bounced off the stone walls of the ancient buildings of Lucerne, Switzerland. Rain had pelted his bare head.

But suddenly the storm had ceased to matter. When he saw her face through the glass door of the bookshop his other senses had rested while his vision reigned supreme, devouring her image.

“Oh!” Jordan Hadlock had exclaimed. In startled reaction, she crushed the heavy book to her chest as another clap of thunder shook the windows of the storefront. Then she realized that the rattling glass wasn’t the result of the thunder alone. Someone was pounding on the panes of the door.

Perched as she was on the ladder leaning against the book racks, she could see the front door of the shop without obstruction. But when she had closed the bookstore for the night several hours ago, she had pulled down the opaque window shade. Whoever was now braving the thunderstorm and knocking peremptorily on the door was identifiable only by a silhouette outlined by flashing lightning.

The shadow’s size and form deemed it male. He was pressing his cupped hands against the glass, trying to peer around the edge of the shade. Jordan heard him mutter an obscenity that had no right to ever be spoken aloud, no matter how softly, and then the pounding started again, more emphatically this time.

Slowly, her heart thudding almost as solidly as the fist on the glass pane, Jordan descended the ladder and edged around the bins of books and newspapers until she stood a few feet from the door.

A lightning flash revealed the large masculine shape standing with feet planted slightly apart, hands on hips. Her visitor was growing more impatient with each passing second. Tottering on the brink of indecision, she weighed her options. It would be dangerous to open her door this late at night to a man obviously already angry. Still, were he bent on some crime he would hardly have announced his presence so forcefully. Maybe he needed help. A medical emergency? He certainly seemed distressed.

Without waiting to talk herself out of it, she went to the door and pulled back the shade far enough for her to see out. The light from inside the bookshop fell on a broad chest with a cotton shirt now rain-plastered to it. The shirt was un-buttoned at the throat and her curious eyes traveled up the strong cords of his throat to his face.

Her eyes widened in feminine interest. While the chiseled features were set in a grim, perturbed expression, the face wasn’t menacing. She was slowly taking in the firm chin, the long, slender nose, and the green eyes when a scowling eyebrow lifted over one of them in a silent query. It said: Well, are you going to stand there gawking at me, or are you going to open this door?

Yes, she was going to open it.

She dropped the shade, slid back the bolt, turned the brass knob, and drew open the door. Two bags, which had escaped her attention before, were tossed through the opening, barely missing her feet. She scrambled aside as her bare feet were splattered with cold raindrops when the bags thumped to the floor. One was brown leather, the other navy canvas.

The man barged into the room seconds after his luggage, turned, and slammed the door shut behind him. He spun around, ready with a scathing remark on her hesitation at opening the door, but the words died on his lips as he looked down at Jordan.

For long moments the two stared at each other, expressionless, without speaking, their only movement that of their eyes as each surveyed the face of the other. A few, very few, seconds ticked by before their breathing became audible. His was light and rapid because of his recent exertion; hers matched it for reasons as yet undefined. The only other sound in the room was that of the drops of rain that dripped off Reeves and fell onto the tile floor.

Jordan tore her eyes away first and directed them to the floor, where a puddle was forming around the man’s booted feet.

“Do you have a towel?” he asked without notice.

“What?” she croaked, unaccountably disconcerted and disoriented.

“Do you have a towel?” he repeated.