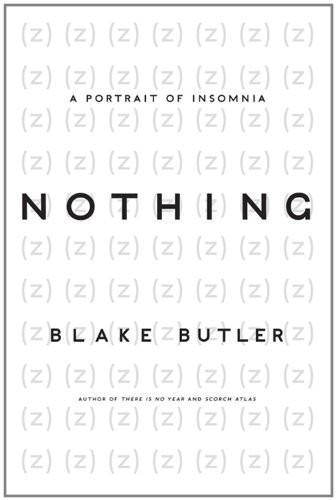 A PORTRAIT OF INSOMNIA

For Heather
& for Cal

In memory of
David Foster Wallace

There is no syllable one can speak that is not filled with tenderness and terror, that is not, in one of those languages, the mighty name of a god.

Everybody    has a song

—John Cage, “Lecture on Nothing”

The gateway to the invisible must be visible.

Praise for
There Is No Year
by Blake Butler

Into the version of the sky above my house one afternoon when I was twelve, the nearby high school released a flood of pink balloons. Maybe fifty head-sized shapes allowed to rise and flee inside the light inside the day, until they landed popped by heat or puncture, or, in time, lost their buoyancy with age. Each balloon had a message tucked in its insides, I’d heard—handwritten dispatch penned in private by whoever blew it up. Some touched down on local lawns and in the streets around the school, though most continued further—their latex bodies trailing out into the outlying air, becoming anybody’s, gone.

One particular balloon, I later noticed, having found no others I could claim, became caught in the high branches of a pine over my family’s neighbors’ yard—too far to climb to or to lob a stick at. No one else seemed to have noticed. I knew at once I needed this as mine—that I
had to
read the words cribbed inside it—
they were for me
—words no one else would ever see.

All that day I lay in wait. I watched the balloon above me watch me watch it. Through binoculars it seemed somehow even farther off. I held still in fervent patience. I do not remember any birds. I felt no time go by until there was no longer light enough outside to discern the tiny shape among the trees’ limbs, their mass a dark relief on muted skyface pale with diffuse human glow. Even then I stared into the outline—I had to be made to come inside and leave my secret thing in the unseen.

I don’t remember anything that night about my sleep or dreaming. The time between the day and day again is void. Most all nights up late alone in homes seem shaped this way—unremembered beyond a gloss that holds the darker hours all together, an edgeless orb.

The next morning the balloon had disappeared: popped against the branch bark, perhaps, or blown off elsewhere, what direction. The trees stood smug in morning calm. They knew and would not speak—or anyway, I did not ask, and found no remnant on the ground beneath them. The surrounding air and dirt went on so far, among continually diminishing horizons. The words in my balloon remained any words—sentences hid from me and sent instead into another, or to no one—symbols eaten by the light. What those words inside me could have said, I wonder—where or what I would have gone or been today having them absorbed—somehow ending up another person—smarter, further—this, gone forever. And still, here I am. Now.

Such kind of aimless mental spin—all without answer—is the kind so many nights that keeps me up long after I lay down, stuck in inevitable fixation over nothing, pointless thinking—the day again once come and gone and nothing new—each day passed the way that days do—walls, windows, websites, faces, food—each repeating in no obvious pattern, without pause. This thankless thinking thinks itself, and begets in its wake only more frames in frames, doors to nowhere, filling the days.

What’s worse is that I’m certain had I managed somehow to find a way to get that balloon, unveil its letter, I wouldn’t now remember it at all. Instead of words that changed my way they’d be more junk among the whatever, a useless blip, in the make of every other hour crammed in clicking by transfixed. Likely I wouldn’t even remember the day of the release of the balloons either, or all my want about that certain one, or how the sky since then seems at once that much more flat and deep—so full with all the light and what it’s sucked up that most nights it appears absent of all stars beyond the biggest, framed with human-given names.

Beneath this shifting veil, like under eyelids, we people keep our own shapeless array—a moving, needing human network without center. Each day the numbers in the cities rise, bodies pushed from bodies in the hours, screaming, new blood—our flesh mass rising on the hour despite the other bodies becoming popped or shriveled up with age like the balloons sent nowhere—the masked stars burning out on their own gas—any of us nowhere, really, ever, among it, except
now
and
here
—unless we trust the likewise rising mass of relics of what we’ve seen and thought and felt and said, days transcribed in shapes and symbols arranged and rearranged each in small dementia among the same containing air of earth—a continuous, insurmountable revision of what was and is and will be, of the dead.

And with each hour, more newborn people,
babies
, more bodies having passed,
unto the soil
, twin tallies rising higher on both sides, each new layer’s residue applied by act of simply passing in time’s silence, under the replication of the image of our selves: the films and the recordings and the buttons pressed and who when where, the shed skin and hair and teeth, the sperm and egg, the seas. Each in our own head our thoughts surround a
me
, each mind the center of a version of a version of the world, surrounded, packed in side by side in air and days. Each day more input, output, from each body—the more awake the more confined—while the volume of the earth’s air remains the same, each location grown engorged with psychic fat—histories of happenings and gatherings and births and deaths of heads, the names and limbs and numbers—each in their own way become covered over, no one, a further rung of what.

That same year as the balloons, as if in mourning, some day I hid a white box under the ground. I’d gotten it in my head, maybe from TV, to make a time capsule, something to hide and so preserve, though I hadn’t yet begun to think of days as disappearing. My selection of what went in was rather rash, selected from the growing archives of crap collected in my closet—I could never bring myself to not hold onto anything a day gave: ticket stubs, postcards, used utensils, notes I wrote to myself inside my sleep. Into the box I placed an address book full of names and numbers of the people that I knew. I put in a softball signed by all the players of my older cousin’s league, all of them strangers. I put in a ream of dot matrix printer paper covered with error garble, which the machine would eject in malfunction sometimes in the night, and which I always found myself entranced by. I put in a ring I’d bought from a garage sale that would open to expose a little hidden space, in which for some reason there was a hunk of resin. There were other things I buried, I am sure, though I can’t remember. I think I thought I’d hide these objects underneath the soil, leave them there for years and years, maybe for a future version of me to dig up, or maybe I imagined I might die and this would be my archive—this crap.

But I couldn’t wait that long. Maybe four months passed before I went and unearthed the box myself. I found the plastic lid had cracked. Grubs and dirt stunk in the folds of what I’d hidden, and there was moisture. The stuff inside had grown a little mold. Instead of joy the relics had turned nasty. I had to throw the whole thing in the trash—except the ring. I think I kept the ring, the one thing not mine, though I can’t today remember where it is. So much I can’t remember, and can’t remember to wish that I remembered, and you and yours, and all in all and on and on with each day, repeating hours piling up unseen. It only grows.

Among this casual prolonged squashing, we learn to hide inside the sound because we must. Today while bored looking through websites about torture—my own blank often evoking an inert want to see the worst—I notice how many common modern methods used on captives often sound like hours in our cities, if reframed:
Forced positions, Prolonged standing, Continuous exposure to bright light or noise, Witnessing torture of others, Cold exposure, Solitary confinement, Threats
,
1
each practice by now normalized to seem for the most part simply part of the experience of urban life. It is a feature of our survival via numbing, ignoring, contextualizing, counteracting this silent blitzing—by sleeping, eating, drinking, laughing at the jokes—that the more minor daily tortures are made common, incorporated, even loved: skin of advertisements, entertainments, socializing, awe of money, unique objects, motion, the expectation of the wish of wanting more. With the internet now too we can at any hour access electronic versions of anything all at once—speech feeds of the bored or awake or paid or lonely or aspiring or horny or worshipful and more; databased images of explosions and sick and murder alongside the shopping and the family albums and the free games; avatars of family and strangers and friendly fronts of corporations; boundless text and sound and image of what might have otherwise remained covert—and each hour only growing, fed by countless bodies pressing buttons at the flat face of millions of machines.

Over time, in such consumption, the body suffers—in aging, thinning, breaking, building calluses, or bruise—each angle of which serves to disrupt quality of sleep—our only temporary exit—and thereby over time further emphasizes those distinctions through exhaustion. Our attention feeds through totems toward the hole. The product of prolonged lost rest in effect operates against the body again like torture or dementia:
Anxiety, Depression, Fear, Lability, Introversion, Lethargy, Fatigue, Loss of memory, Inability to concentrate, Sleep difficulties, Nightmares, Headaches, Visual disturbances, Vertigo, Paresthesias, Sexual disturbances.
2
These ruptures gather in gross packets, one feeding another, causing one’s defenses to become numb or dull while still aware, and opening the flesh to sickness or predator, toward death. In the daily gush the waking hours often may seem to feel more like one’s sleeping and one’s sleeping held more shallow, ruined, awake.

It must come in, too, through the blood. There’s something inherent in our human aspect that feeds the will to make and want and make and want and still need more—that same gush that drives us among others to want something where there is nothing, to want calm where there is noise. Often we become bored when the familiar ways no longer seem to hold some unnamed magic—some unconscious chance it might explode or shapeshift right in our hands—glee of the new—though this is also the kind of repetition that makes us feel comforted, lets us rest. The further waking of the wanting comes on often as a product of itself—a taste of the unknown or glee or terror causing in the body the birth of a receptor that now requires it be fed—or to be buried—lacing the familiar with something slippery and alien, driving—the object filling out its name and not the other way around.

Ransom of Love by Al Lacy
My Heart Lingers (A Hearts of Misty Mesa Story): BWWM Interracial Romance by Boddie, Brandi
Brighid's Mark by Cate Morgan
A History of the Crusades-Vol 3 by Steven Runciman
Nine Lives by Erin Lee
Suspicion of Guilt by Barbara Parker
04 The Head Girl of the Chalet School by Elinor Brent-Dyer
Monsters by Liz Kay
How to Moon a Cat by Hale, Rebecca M.
In Real Life by Chris Killen
Our partner