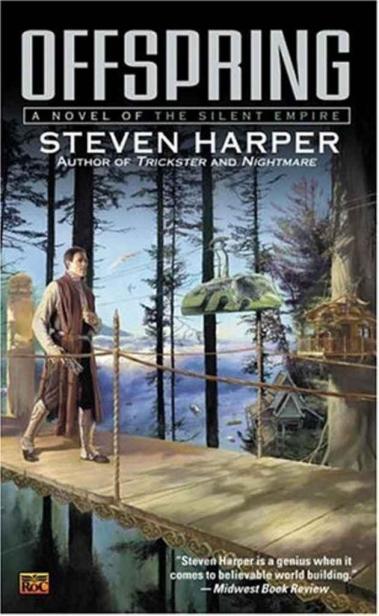 Table of Contents
OFFSPRING: A NOVEL OF THE SILENT EMPIRE
by Steven Harper

novels of the Silent Empire

“This exceptional first novel in a new series is a satisfying and complete work in itself. A diverse array of memorable characters and worlds makes this a book [to] relate to and enjoy.”

“This series opener should appeal to lovers of far-future space opera and sf adventure.”

“In terms of narrative and world building, this is definitely a well-told tale, and Harper’s skill at characterization is significantly above average. Moreover, his extrapolation of aboriginal Australian myth freshens the shopworn theme of telepathy. Even the future slums he imagines are memorably vivid.”

“Harper is a promising writer.”

“A thoroughly solid sequel, highly recommended to those who enjoyed its predecessor.”

“[Kendi’s] ability to overcome the traumas he has endured make him a hero worth rooting for by the enthralled audience.”

“Steven Harper is a genius when it comes to believable world building.”

“I read the last hundred pages in sitting. I just couldn’t put it down.”

Without limiting the rights under copyright reserved above, no part of this publication may be reproduced, stored in, or introduced into a retrieval system, or transmitted in any form, or by any means without the prior written permission of the copyright owner.

This is a work of fiction. Names, characters, places, and incidents either are the product of the author’s imagination or are used fictitiously, and any resemblance to actual persons, living or dead, business establishments, events, or locales, is entirely coincidental.

To Aran, my own child.

“Playing games helps children learn to live by rules and learn the difference between fair play and exploitation.”

“We’re offering generous terms,” the game rep continued earnestly. “A five hundred thousand freemark advance against three percent royalties on the first two million copies, four point five percent on every copy after that. You don’t have to offer anything but your endorsement. We do all the work—writing, developing, marketing. You just sit back and rake it in. Easy money. But we have to know now so we can get production moving, strike while the iron is hot.”

Kendi tapped his fingers on his desk and looked at the holographic models on the table in front of him. One was a representation of himself, a tall, dark-skinned man with tightly-curled hair, a flat nose, and a whipcord build. Australian Aborigine to the core, though Kendi preferred the term “Real People.” Next to Kendi’s hologram stood a model of Ben. He was shorter than Kendi, stocky, red-haired, and damned handsome, especially in the spring sunlight that streamed through the office window.

Kendi’s office was, like most offices at the monastery, small and cramped, with wood-paneled walls and a hardwood floor. To combat the lack of room, Kendi kept his space austere. His desk was bare, and there was only one chair for guests. The windowsill, which looked out into leafy talltree branches, had a precious few holograms on it—Ben and Kendi arm-in-arm on a beach, a motherly woman with dark hair, a representation of Real People cave paintings. A pair of pictures hung on the walls, both pen-and-ink drawings of Outback landscapes.

A third hologram waited to one side on Kendi’s desk. It portrayed a chesty blond woman, blue-eyed and beautiful. Kendi picked it up by the base.

“Who's this supposed to be, Mr. Brace?” he asked. “She looks familiar, but I can’t place her.”

“Ah. That would be Sister Gretchen Beyer.”

Kendi almost dropped the hologram. “
Gretchen?
” he spluttered. “It looks nothing like her. What did you do, stuff balloons under her—”

“We had to modify her a little,” Tel Brace said smoothly. “After all, sim-game heroes are larger-than-life. People have expectations.”

“Anything that big would be more of a surprise than an expectation,” Kendi muttered. “Why do you have a workup of her in the first place? I mean, she was important to everything that happened during the Despair, but other people were more instrumental, you know?”

“Part of the sim-game involves a romantic subplot,” Brace said. “This version allows the players a choice of partner—Ben or Gretchen.”

“A choice of partner.”

“We want to appeal to the broadest possible base,” Brace explained. His golden hair shone in the sunlight, and a part of Kendi wondered if HyperFlight Games had chosen Brace to approach Kendi because of his good looks. “There will certainly be a segment of players—male and female—who will be more interested in playing up a romance with a woman, and we have to meet that need. It’s a standard development tactic.”

“I see. What did Gretchen have to say about this?”

“What are you going to call this game again?”

“ ‘Dream and Despair.’ Marketing predicts it’ll be one of the biggest sellers in all history, rivaling even ‘The Siege of Treetown.’ You and your family will be set for life, Father. All you have to do is sign and watch the freemarks roll in.”

Kendi toyed with the hologram in his hands. Dream and Despair. An apt title. The galaxy had once been dependent on the Dream, a telepathic plane of existence that only telepaths known as the Silent could reach. Within the Dream, language and distance were no barrier to communication. In a galaxy where faster-than-light travel was cheap and faster-than-light communication was impossible, the Silent had become essential, allowing governments, corporations, and other entities to maintain quick communication with outlying branches, subsidiaries, and colonies.

Then came the Despair. Terrible forces had torn the Dream asunder, and the Silent found themselves exiled from its haven. Bereft of the Dream’s touch, many Silent became despondent, even suicidal. Kendi, Ben, Gretchen, and several others had been caught in the maelstrom of the Despair, and they had managed to keep the Dream from self-destruction, but only barely. Now only a tiny handful of Silent could enter the Dream, and the place had become a near-wasteland. Unable to communicate with their allies and subsidiaries, governments and corporations plunged into chaos. Many fell apart or went bankrupt. Some rulers grabbed power, others abandoned it. The Empress Kan maja Kalii, ruler of the Independence Confederation had, for example, disappeared without a trace.

Now a company called HyperFlight Games wanted to make a history sim-game out of it all, with Kendi as the hero.

Part of Kendi was flattered. The rest of him was suspicious. Tel Brace had a low, smooth voice and an earnest manner, both of which flared Kendi’s nostrils. He also recognized the elements of a good con game—a demand for a quick decision, smooth explanations, overly friendly demeanor—and he gave Tel Brace a mental salute, one con artist to another.

“I’ll need time to think about it,” Kendi said, still holding the Gretchen hologram. “Consult with some people, sniff around, you know. Leave me a copy of the offer and I’ll get back to you.”

“I don’t know how long I can keep the offer open,” Brace said, racking up another con game point on Kendi’s mental tally. “The boss is riding me, you know?”

“I’m sure,” Kendi said.
Now he’ll take me into his confidence,
he thought.
Make me feel sorry for him.

“Tell the truth,” Brace continued conspiratorially, “I’m really hoping you can help me out. The economy is still bad after the Despair, and I haven’t been able to seal any decent contracts in months. I’m worried about my kids. Things got even rougher after their mother left. Do you have children, Father?”

“Not yet,” Kendi said, and held up his comp-unit. “I need time to consider your offer, Mr. Brace, so please zap me the terms. I have a lot to do today.”

Brace managed a weak grin, one completely unlike the mega-watt version he had used earlier. “Right. Here it is, then.” He aimed his own comp-unit at Kendi’s. A green light flashed on each, indicating a successful data transfer. Brace stood up and held out his hand. Kendi rose to shake it. Brace’s grip was dry and firm.

“Keep the holograms as our gift, Father,” Brace said. “I hope to do business with you soon.”

After the man left, Kendi checked his messages. His public box was crammed. Four offers for speaking engagements. Sixteen requests for information about himself. Eighteen sales pitches. Twelve requests to let someone write his biography. Thirty-five people writing to say they appreciated what he had done for the Dream. Forty nasty letters asking why he hadn’t simply let the Dream die. Nine marriage proposals. Two death threats. And over a hundred solicitations for more...personal services.

Kendi forwarded the death threats to the Guardians, deleted the rest, and called up the Hyperflight Games agreement to skim. His brow furrowed. Was he reading it right? According to the contract, he would have no input on the final version of the game. Hyperflight would also have the right to use his name and likeness for any advertising they liked, whether it related to the game or not, and the agreement lasted one hundred years after Kendi’s death. The royalties, meanwhile, came off the net profits, not the gross take. Kendi narrowed his eyes. No sim-game, movie, or music feed had ever made a profit, and the companies employed teams of accountants to prove it.

Loving the Wild Card by Theresa L. Henry
On The Dotted Line by Kim Carmichael
White Ute Dreaming by Scot Gardner
A Trial by Jury by D. Graham Burnett
A Sweet and Spicy Kind Of Love by Minx Charmer
The Year of Living Shamelessly by Susanna Carr
Room No. 10 by Åke Edwardson
Mr. Darcy's Dream by Elizabeth Aston
Under My Skin by M. L. Rhodes
Falling For A Redneck by Eve Langlais
Our partner