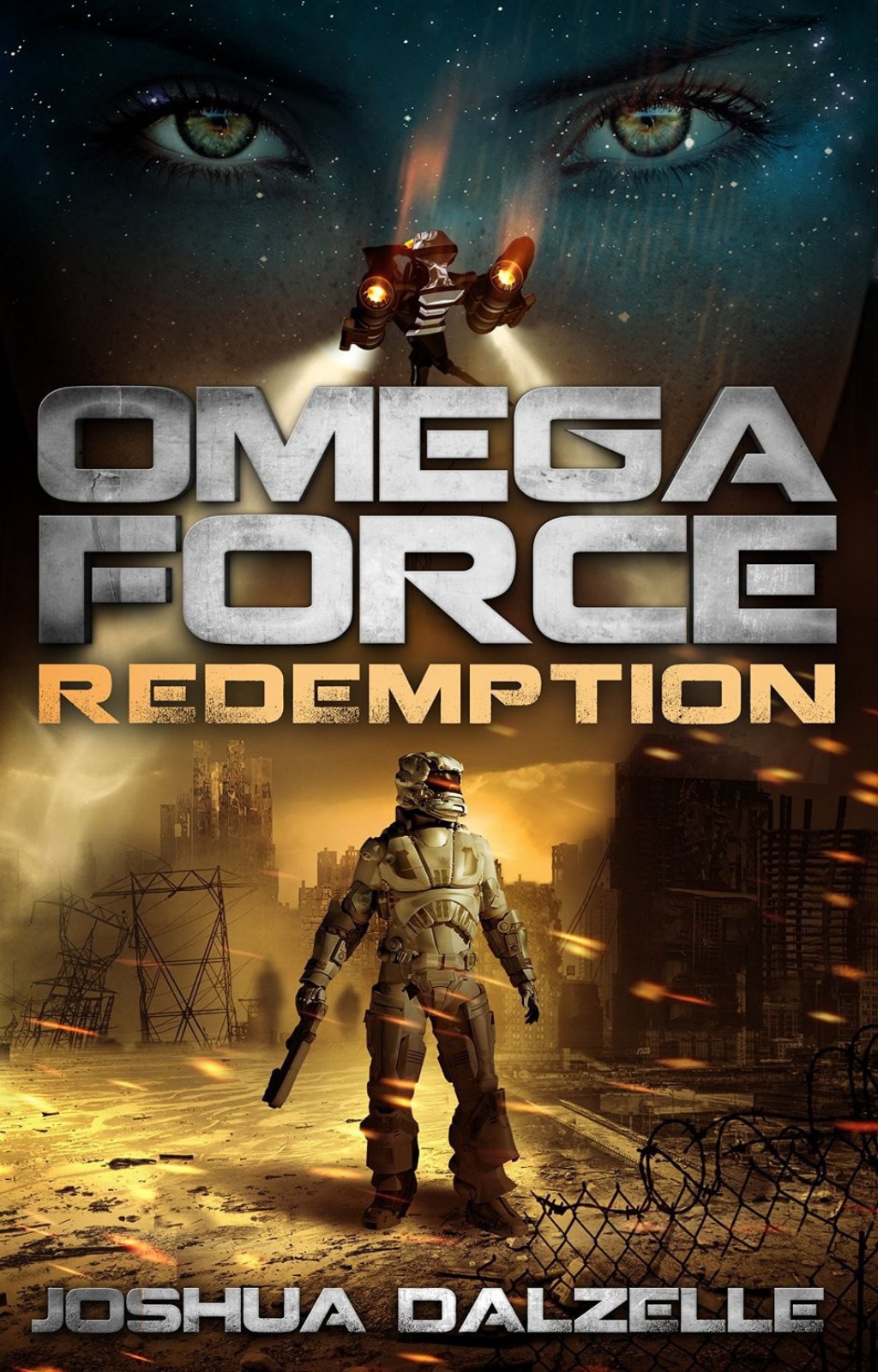 This eBook is licensed for your personal enjoyment only. This is a work of fiction. Any similarities to real persons, events, or places are purely coincidental; any references to actual places, people, or brands are fictitious. All rights reserved.

"You can inspect the cargo on your own time. Please sign the release so my associate and I can be on our way."

Jason Burke wasn't known for being a patient man. In recent times he had become even less so. Standing in the sweltering sun of Tetara-4, waiting for a fussy alien of an indeterminate species to simply press the “accept” icon on the tablet he had stuck in its face, he could feel his thin veneer of civility slipping.

"This will take as long as it takes," the alien said, giving Jason a disgusted look, "and you'd do well to learn your place." The human ground his teeth in frustration and checked the time again for the tenth time since they'd landed. This pushed their schedule back again and it looked doubtful he'd make his last delivery on time.

Jason watched the alien really begin to drag the delivery inspection out, making it quite obvious that it had no intention of hurrying things along for his sake. He was about to address the alien again when he heard a sudden commotion on the ramp near his small cargo ship.

He gave the alien one last hostile glare before walking around the yawning cargo doors and towards the blunt nose so he could get a better view. From what he could tell, a group of well-equipped soldiers had just executed a raid on another nondescript cargo hauler, its crew now lined up and restrained on the tarmac. It looked like the whole thing went down so quickly that it was over before anyone knew it had started. He heard the crew of the ship complaining bitterly while soldiers clad in dark, form-fitting uniforms began searching the vessel.

"Pilot," the alien behind him said in a voice that made Jason have to count to ten before answering. "I am done with my inspection and have accepted the shipment. You may leave." Jason gave one last look to the raid taking place less than a hundred meters from his ship and walked back to the cargo bay entrance. He grabbed the tablet without a word and motioned for his partner to follow him aboard the ship, slapping the control to close the cargo doors, wincing as they creaked and moaned.

"Let's get prepped to fly," he said. "We might have a slim chance of this last delivery being made on time if we leave now."

"How many times have I asked you not to call me that anymore?" Jason asked with a weary sigh. "It's just Jason now."

"Just start the engines. I'll be up in a few minutes," Jason said, making some pretense of checking the cargo over until the heavy footfalls receded into the interior of the ship and he was alone. He leaned against the bulkhead of the aging cargo hauler and let out another heavy sigh. This wasn't how things were supposed to be. Before he could really get down to the business of wallowing in self-pity he heard the engines begin to spool up, shaking the spars and vibrating up through his boots. With one last look around he turned off the lights in the cargo bay and set the environmental system to drop the ambient temperature back down to twenty degrees Centigrade before exiting the hold and sealing the hatch.

He walked up the narrow corridor that ran the entire centerline of the ship, squeezing his shoulders in as he passed the galley and climbed the short set of steps that led to the flight deck. The ship had originally been designed with a crew of five in mind, but Jason and his single partner had no problems managing without the extra help.

"Did we already get our clearance, Lucky?" Jason asked as he slid into the pilot's seat.

"It just came through ... Jason," the battlesynth replied from the seat next to him. They'd had to pull the original seat and replace it with something a bit more substantial to handle Lucky's bulk and height. "You can lift off as soon as the engines complete their startup cycle."

"On this state of the art machine that should be quick," Jason said sarcastically. In truth, the cargo ship was in desperate need of an overhaul on many systems, the standard drive engines not being the least among them. "Go ahead and contact the client for this last delivery. There's a chance we'll make it on time, but the last two stops have put us behind a bit."

"I will let them know," Lucky said. "We loaded this cargo near the front of the hold because the deadline was not as strict as the others."

"Yeah," Jason said disinterestedly. "We're certainly becoming masters of logistics ... or at least of packing shit in the right order in our tiny cargo bay. Stand by for liftoff." He grabbed the manual flight controls, which were obviously not made with humans in mind, and throttled up the ship's ventral repulsors. With a groan and a shudder the ship grudgingly hauled itself into the air. Jason double checked his projected course and fed power to the main drive, pushing them away from the spaceport.

"Start prepping the slip-drive," he said as he put the ship into a shallow climb. "I'd like to leave this system behind as soon as possible."

"Of course," Lucky said agreeably. The fact his friend could take to such a mundane job with so much enthusiasm had, at first, impressed Jason. Now it made him want to punch the battlesynth in the face despite the fact all he would get out of it was a badly damaged hand.

"I'm taking us up top," Jason said, pulling the pitch control back and throttling up the main drive to full power. "Keep an eye on the air pressure in here. I'm still not sure I trust that patch we fixed last week." The ship lumbered up out of the atmosphere as the main drive shook the ship and its occupants harshly. Even though the main drive was only meant to push the ship out of an atmosphere so that the slip-drive could be engaged, it was still woefully underpowered. "This thing is such a piece of shit."

"This was the only ship that was in our price range at the time," Lucky said.

"Perhaps next year we can—"

"What's that?" Jason interrupted Lucky before he could launch into another lecture about fiscal responsibility. "On the sensors. We've got something coming up under us from the direction of the spaceport."

"It could be traffic along our same course," Lucky said. "But they are increasing velocity and pitching sharply to match our ascent."

"Figures," Jason muttered. "We almost made it all the way through a run without someone trying to jack our cargo. Any idea who they are?"

"Negative," Lucky said calmly. "They are not running with a standard transponder signal and this ship's sensors are unable to determine the type of craft, only that there are two."

Jason suppressed another sigh. "I'm pushing this heap to full power," he said. "Get the slip-drive nacelles deployed and the emitters charged. As soon as we're out of the thermosphere we'll hit our first jump."

The ship complained mightily as Jason overrode the safety interlock on the drive power control and pushed it just beyond its normal operating range. He watched Lucky's fingers dance nimbly over the controls on his side despite the heavy buffeting they were experiencing. He checked their velocity and nearly laughed out loud. Despite all the noise and shaking the ship had gained a negligible bump in acceleration. Even so, it looked like they would be able to outrun their pursuers unless they were willing to risk attracting attention from Tetara-4's orbital control authority.

"We are receiving a com channel request from our pursuers," Lucky said, looking at the com panel that sat between them. "They wish to discuss terms if we turn back towards the surface and land."

"Ignore them," Jason said. "I'm not entertaining a conversation with a bunch of damn pirates. We're almost to our mesh-out point. How's the drive looking?"

"It will be sufficiently charged for our first jump," Lucky assured him. "Course is entered and ready."

"Standby," Jason said, reaching for the slip-drive controls. "Jumping out in ten."

Ten seconds later the emitters that had extended from either side of the small cargo ship flared with a bright, white light and the ship disappeared from the Tetara System even as the two smaller tactical vessels that had been chasing them pushed up out of the planet's orbit. Without hesitation they swung onto a new course and also disappeared in a brilliant flash.

"At least there was something to break up the monotony that time," Jason said as the ship touched down softly on S'tora, the planet he and Lucky were calling home at that particular moment.

"True," Lucky agreed, "but that could hardly be called exciting, even by our current standards."

"We're delivery boys now, Lucky," Jason said as he climbed out of the seat. "No matter what clever titles we attach to our business, we take shit from one point and leave it at another. Being chased is about as much excitement as I want anymore." As he walked off the flight deck and into the narrow corridor Lucky watched him with an expression that could almost be sadness despite the fact his facial features never changed. The battlesynth finished securing the ship and locking out the computer with a complicated, randomized cipher. They'd found, surprisingly, that the dilapidated cargo hauler was more of a target for thieves than their previous ship.

"I will say one thing for this planet," Jason said, scratching at a couple months’ worth of beard as Lucky joined him outside. "Not too many other places in the galaxy where a beachfront house would be so cheap."

It was true. As frugally as the pair were living they were able to afford a well-appointed house that opened up to a beautiful beach with light pink sand. The indigenous species on S'tora had a fear of the sea that was hardwired into their evolution. Coastal towns were considered undesirable and only those who were unfortunate enough to make a living attached to the planet's oceans lived there.

When Jason and Lucky had first arrived the human couldn't believe how nice the house was for how little they paid. The battlesynth, who needed very little in the way of living accommodations, was indifferent.

"How soon do you want to try and arrange for another run?" Lucky asked.

"Let's take a bit of time off," Jason said. "We have enough money to get by for a while without dipping into our savings. C'mon, let's go grab the car and get the hell out of here."

Lucky said nothing as he turned to follow his partner and former captain. He'd been subtly pushing at the edges over the last few months to see if he could nudge Jason out of the rut his life had crashed into. He’d never regretted his decision to stick with his friend, but he wondered how long the human could carry on like he was.

"You want to hit that bar by the beach that's on the way?" Jason asked innocently. "We don't have anything pressing to do in the morning." Lucky said nothing as he climbed into the open air ground vehicle. This too was following the now-predictable pattern in Jason Burke's downward spiral. If something didn't change soon, he would have no choice but to take more drastic measures.