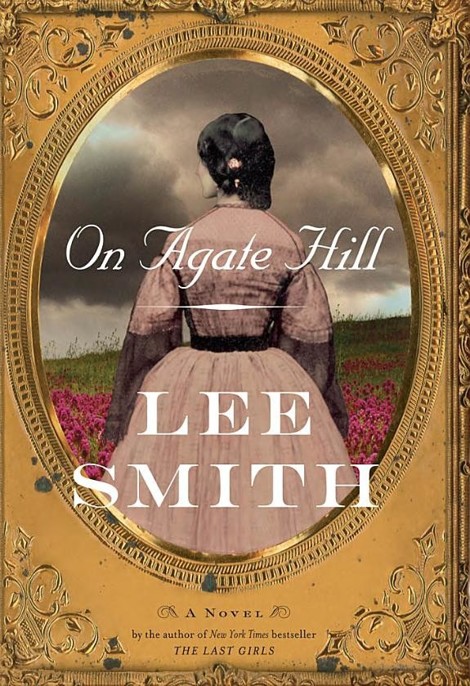 Praise for
On Agate Hill

“Brings a dead world blazingly to life. . . . A book that seeks to rejuvenate the rapt early reader in us all. . . . [Lee Smith] is a subtly intrepid and challenging storyteller.”

“The willful Molly is no hot-house flower, and her determination to live her own life—for better or worse—is the driving force of this powerful novel.”

“Memorable. . . . An independent and impetuous woman whose loves lead her into Dickensian tragedy.”

“On Agate Hill
, as lyrical and haunting as an Appalachian ballad, casts a powerful charm.”

“One of those big, sweeping, epic American coming-of-age stories that puts you in Molly’s shoes and keeps you riveted there, through good times and bad.”

“To declare this novel her best yet—well, that’s saying something. . . . Smith is such a beautiful writer, tough and full of grace, that soon you are lost in the half-light of Molly’s haunted landscape, listening to the voices of the ghosts, wishing they’d let you stay longer.”

“On Agate Hill
is a masterpiece and may come to be considered a more important novel than even Smith’s wonderful
Fair and Tender Ladies
. . . . Will serve as a model for future writers of historical fiction.”

“With lyric intensity . . . inventive storytelling . . . Lee Smith imagines the life of an orphan girl growing up in the post–Civil War South.”

“A perfect book for the late summer—no matter where your hammock hangs. . . . With pitch-perfect tone and texture, the veteran Southern storyteller imagines the life of a young girl orphaned by the Civil War.”

“Captivating moments and colorful characters. Its many narrators—young Molly, her school’s headmistress, her kind teacher, an uneducated friend and a much older Molly—all speak with Smith’s voice, gently disguised.”

“Smith is absolutely clear . . . on one thing: the importance of living passionately, with all one’s heart—whatever the consequences.”

“A joy to read. . . . Molly Petree is unforgettable, on par with Kaye Gibbons’ Ellen Foster and others, a true Southern heroine in true Southern tradition.”

“Arresting. . . . [Smith] gives readers a convincing portrait of the post–Civil War south and captures the desolation and loss, the eerie, wild space throbbing with possibility that comes on the heels of destruction, when old ways have been lost and before new rules have taken their place.”

“Molly is a wonderfully evocative character who could pierce the heart of the toughest reader. . . . Lee Smith’s heroine rivals Scarlett O’Hara.”

“Smith offers genius; she knows and writes so well Southern voices and seems to almost channel lives past.”

“The publication of
On Agate Hill
is more than happy—it is very special. It is one of [Smith’s] major books, perhaps her best since
Fair and Tender Ladies
.. . . A great love story.”

“Lee Smith is a natural-born storyteller. No, that description doesn’t do justice. . . . Lee Smith is a whopper of a storyteller whose tales involve, enmesh, enthrall readers from the opening sentence to the final page.”

“Masterful. . . . [Smith] draws in the reader instantly. She also can create and sustain a mood like few other writers.”

“
On Agate Hill
is a great example of how a tale with traditional Appalachian tones can also work as a modern, psychological, shifting, organic novel. . . . Lee Smith’s creation is an inventive original that classes it with Barbara Kingsolver’s
The Poisonwood Bible.”

The Last Day the Dogbushes Bloomed

Something in the Wind

Me and My Baby View the Eclipse

News of the Spirit

Originally published by Algonquin Books of Chapel Hill in 2006.

This is a work of fiction. While, as in all fiction, the literary perceptions and insights are based on experience, all names, characters, places, and incidents either are products of the author’s imagination or are used fictitiously.

U
P ON
B
OBCAT

Institute for the Study of the South

Remember me? Well, I know you have not heard from me in a long time because I dropped out and all (that was so slack), but now I do want to finish and I hope you will let me back into the program and give me another extension on my thesis considering what I have been up to
.

I am not going to do “Beauty Shop Culture in the South: Big Hair and Community” after all, despite my background in pageants
.

I want to turn in this box of old stuff instead, see what you think! I believe you will be as excited as I am
.

Also I am truly a changed person, from reading it. More on that later
.

But first I guess I need to tell you how I got a hold of all this, and some things about my family, which is not normal, though we used to be
.

The family was me Tuscany Miller (actually I picked the name Tuscany myself, in high school), my older brother Padgett, and my little sister Louise, the brain. My mother was an elementary school principal while my father owned and ran his own furniture store The Aesthetic in our hometown of Lookout, NC. Our grandparents live across the street. So you see what I mean by normal
.

Even that name The Aesthetic did not give a clue. We were totally surprised when Daddy came home from the store one spring day bringing a young man named Michael Oliver with a spiky haircut and a black leather jacket. “I want you to meet Michael, a wonderful person,” Daddy said, standing in the front door holding hands with him. Mama put down her purse, she had just come in from school. Luckily Padgett was at baseball practice. Louise was doing her homework and I was watching Jeopardy on TV, I will never forget it
.

Daddy went on to say that Michael Oliver was a designer from Chicago and that they had first met in 1999 at the Furniture Market in Hickory, where Daddy went every year, and that their friendship had continued and ripened to the point where they must be together
.

“I can’t believe you used the word ripened,” said Louise who has always been kind of weird
.

As for me I did not say one thing but put the TV on mute
.

“I have heard so much about all of you,” Michael Oliver said
.

Later my best friend Courtney would say that he is hot
.

“Oh for God’s sake, Wayne,” Mama said walking out of the room
.

Things got even worse after that. First Daddy left and went to live with Michael in Asheville, where anything goes. Mama quit her job and started running the furniture store, which has been a big success. She buys the more traditional lines, like Bassett. I won Miss Confederacy then went off to college so was not there when Daddy came back to visit one day and announced that he was now becoming a woman so he could marry Michael
.

Julie and Romeo Get Lucky by Jeanne Ray
Heart's Haven by Lois Richer
The Orchid Affair by Lauren Willig
House of Masques by Fortune Kent
No Corner to Hide (The Max Masterson Series Book 2) by Mark E Becker
Empyrion I: The Search for Fierra by Stephen Lawhead
Mischief in Miami by Nicole Williams
Claws by Ozzie Cheek
Garlands of Gold by Rosalind Laker
No Sorrow Like Separation (The Commander Book 5) by Randall Farmer
Our partner