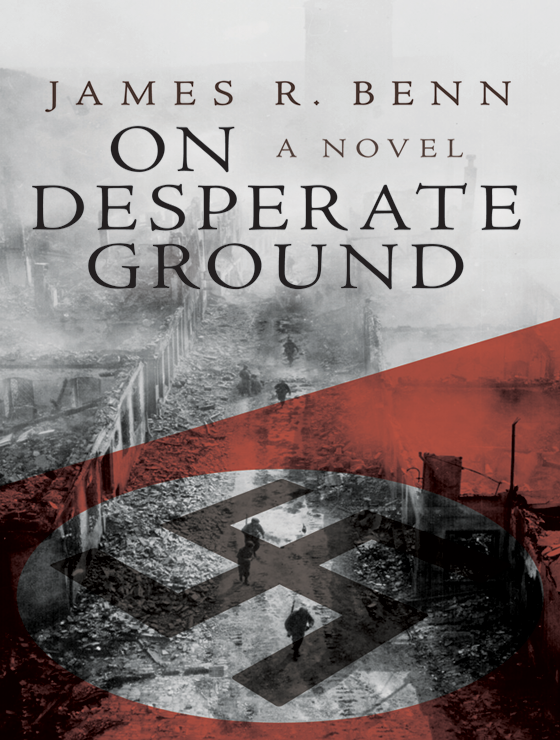 Dedicated to the memory my father,

A soldier of the Second World War.

When you leave your own country behind, and take your army across
neighboring territory, you find yourself on
critical ground
….

When you penetrate deeply into a country, it is
serious ground
.

When you penetrate but a little way, it is
facile ground
.

When you have the enemy’s strongholds on your rear,
and narrow passes in front, it is
hemmed-in
ground
.

When there is no place of refuge at all, it is
desperate ground.

On desperate ground,
proclaim to your soldiers
the hopelessness of saving their lives.

The only chance of life
lies in giving up all hope of it.

Sun Tzu, The Art of War

Leutnant
Dieter Neukirk peered through the dirty windshield of the lead truck as the driver slowed, turning onto the side road leading to the railroad station. He felt sweat break out at the small of his back, sending a shiver through his body. His mouth went dry as his heart hammered against his chest, and his hand trembled as he fumbled with the door handle. He needed to get out, to move, to breathe, to speak, before his body betrayed him and showed the depth of emotion beneath the uniform.

Opening the door, he stood on the running board, jumping off while the truck was still moving as the convoy rolled to a halt. He watched the line of vehicles behind him, thin slits of light spilling through the blackout tape across their headlights. Taking a deep breath, he willed himself into calmness as he watched the windows of the railroad station. Inside, officers moved like ghosts in the feeble lamplight, casting faint shadows against glass.

He stretched and straightened out his stiff back, sore from the long, dark ride from Dusseldorf. All was quiet except for the crunching sound of wheels braking on gravel. The silence was odd, misplaced, too pure and delicate for what was about to happen.

The stillness was broken by shouted commands and the heavy sound of booted soldiers laden with gear, hitting the ground one after another as they disembarked, forming up along the roadside. Grunts, curses and groans drifted in the night air. The door of the railroad stationmaster’s office slammed open and light spilled out, framing the form of the officer in command of the operation. Major Johann Faust physically dominated everyone around him. He strode down the steps with a focused purpose a junior officer and two civilians in leather trench coats followed him, quickening their pace to keep up with the long stride of his six-foot athletic frame. He went straight to Dieter.

“Brandenburg Special Detachment 55 forming up, sir!” Dieter responded automatically as he stood to attention, bracing for the intensity of Faust’s scrutiny. “Ready for boarding in four minutes.”

As if in mechanical response to his report, the locomotive on the far side of the station released a great hiss of steam, moving forward on the tracks, closer to the men who were pulling their ragged line into order as they spied Major Faust eyeing them. He looked at Dieter but said nothing as he pulled off his gray German officer’s greatcoat, throwing it to his aide without looking away from the younger officer. Faust, like all the men of Special Detachment 55, was not wearing the gray-green uniform of the German Wehrmacht, but rather the green tunic and pants of the Dutch Army.

“Let us inspect our Dutch soldiers, then.” said Faust with a smile.

He walked down the line of men, more than 100 strong, all arrayed with Dutch uniforms and weapons. Neukirk’s non-commissioned officer,
Feldwebel
Jost Brunner, fell into step at his side.

“Everything ready?” asked Dieter in a whisper.

Dieter relaxed, doubting that the Major could find anything to fault after the months of training and practice that had brought the Detachment to this place, moments before the German invasion of France and the Low Countries.

Major Johann Faust and his men were members of the Brandenburg Regiment, a special military unit attached to the German Secret Service – the
Abwehr
. Men had been recruited from all branches of the armed forces, and most could speak several languages, many well enough to pass as a native. Trained in the operation of weapons from every army in Europe, as well as radio communications and explosives, their knowledge of hand-to-hand combat and the varied and stealthy methods of killing made them one of the most lethal, silent and effective units operating in this first year of the Second World War. Ironically, the need for specialists in foreign languages, combined with intense secrecy, provided the Brandenburg Regiment with an ethnic mix that would not have been tolerated in any other of Hitler’s formations. There were Czarist Russians and Polish adventurers, fascist Frenchmen and Italian monarchists, all united within this elite unit, some hoping to take revenge in their own part of Europe for past defeats, others hiding from the forces that had defeated their cause. It was rumored that some political opponents of the regime had found refuge in the unit, where the security that surrounded those accepted into its ranks hid them in plain sight. It was a regiment of secrets.

It had been Brandenburgers who infiltrated across the Polish border in 1939, hours before the German invasion. Dressed in Polish uniforms and led by their Polish-speaking comrades, they seized strategic crossroads and ambushed Polish troops as they came unawares to the front. Poland was the start of the war, but only a dress rehearsal for the Brandenburgers. Today the Regiment was sending soldiers across the frontier in advance of the invasion force, to speed up the drive across Holland and Belgium. This time, the move was bolder than in Poland. Much bolder, and much more of a gamble.

Special Detachment 55 was a group of Dutch speaking German soldiers, outfitted as a company of Dutch infantry. The assignment was to capture a critically important bridge across the Maas River, less than ten kilometers on the other side of the border. Between the German forces and the bridge was the small city of Venlo, and if resistance there held up the main forces, all hope of capturing the bridge and speeding across the river into the interior of the southern Netherlands was lost.

It was Major Faust who had come up with the plan. Disguised as Dutch infantry, they would ride on the outside of a train consisting of a locomotive and half a dozen cars, which would smash through the border crossing and proceed at top speed to Venlo. Once in the city, a Dutch troop train moving towards a strategic bridge would excite little comment, especially since by then German air attacks would already be underway. They would bluff or shoot their way down the line to the Maas to seize the bridge, aided by two reinforced Wehrmacht heavy weapons companies concealed inside the train cars. With machine guns, anti-tank guns and mortars, the 300-man battle group would dig in and hold at both ends of the bridge, while the Brandenburg engineers dismantled any explosives the Dutch might have in place. Unless the first wave of panzers met with heavy resistance, Faust expected his force would be relieved by noon on that first day.

Dieter quickened his pace to keep pace with Faust as he walked down the line of men, eyes darting from one to the next, checking weapons and uniforms. Faust’s face was grim, his eyes narrow as he pointed to a soldier with a tunic button undone. He remained quiet as he worked his way through the company. His inspection complete, he turned on his heel and barked at Dieter.

“
Herr
Major!” Neukirk responded nervously, expecting a reprimand for the button or some overlooked detail.

Instead, Faust tilted his head slightly to the waiting locomotive, now building a head of steam, seeming to strain forward toward the frontier.

“Shall we board the morning express to Venlo, Dieter?”

It was the first time Dieter had ever addressed by Faust with his given name, and the first suggestion that beneath the strict and driven exterior there might be a hint of humor or friendship. Dieter heard Jost gasp behind him. For three months, since Dieter had been given his first important assignment as the officer in charge of Special Detachment 55, he had seen rigorous and dangerous training under the demanding Major, commander of all troops involved in Operation En Passant. Faust was an accomplished chess player and the idea of an oblique capture of his target while moving behind the front line appealed to him.

Dieter saw an excitement in Faust where before there had only been rigid determination. He felt honored and favored to be part of this daring raid, but Faust’s casual remark touched something deeper in Dieter, the need to be trusted and accepted by his commanding officer. He wanted to show Faust that he could match the nonchalance of a joke before battle. His mind racing, he attempted to match Faust’s bravado.

“
Jawohl, Herr
Major. I have an appointment in that direction myself this morning.”

Faust smiled, a full grin that Dieter had never before seen. An odd joy rose up within him, and his face flushed with embarrassment at the cresting of emotions he felt. It was almost too much. But Faust hadn’t noticed and his smile vanished as quickly as it came.

“The heavy weapons group is in place. Mount your men by squads. We leave in ten minutes,” Faust said as he glanced at his watch.

Dieter turned to his sergeant, but
Feldwebel
Brunner had already heard and anticipated the order.

“First Squad take positions on the engine!” he bellowed, although the men were all close enough to have heard him whisper.

Jost walked down the line, directing the squads to their positions on the top of the cars, up front on the locomotive, or at the rear of the last car where a machine gun was set up to discourage pursuit.

Dieter watched. Everything went smoothly, as it had every time they had practiced it. He went from feeling nervous to excited and then to scared, unable to tell which emotion he was feeling at any one moment. He was certain he didn’t want his men to see anything but confident pride as he took his position on the locomotive, along the narrow walkway above the steel wheels.

As the opening rays of the dawning sun lit the train, he noticed something different. In all their training drills, they had used the same locomotive and cars so they would know them like the back of their hand. This was the same train, but the ornate paint job identifying it as a German Rail locomotive had been painted over. It was now a solid, deep black with no telltale identity markings. Steam from the engine was released and a great cloud rose up in front of Dieter, the shrill sound of the whistle assaulting his ears. Through the steam he hazily saw his men swarming over the dark and powerful form of the engine that would carry them into the conflict. He stood as if rooted to the ground, feeling a sudden stab of unexpected terror grip his heart, as the dark mechanical beast belched clouds of hot steam.

Dieter knew with a certainty that his life was about to profoundly change. Nothing that he had ever done before—reading a book, kissing a girl, swimming in a cool lake—could ever be done again in innocence. He also realized that he had never before given it a moment’s thought.