Read On Her Six (Under Covers) Online

On Her Six (Under Covers) 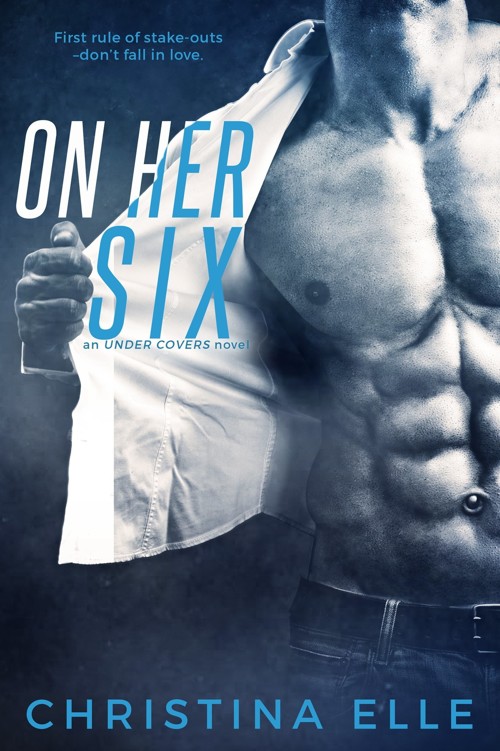 New neighbors are bad news in Samantha Harper’s experience. Especially ones as suspicious and brooding as the guy who just moved in next door. So when the dangerous but sexy stranger seems to be involved in something illegal—the aspiring cop in her takes action. If only she could stop thinking about how he looks naked…

All DEA agent Ash Cooper wants to do is lay low and survive this crap surveillance assignment. But after a run-in with his attractive neighbor, he realizes that’s going to be much harder than he planned. Keeping the woman out of trouble is hard enough, but keeping his hands off her is near impossible.

Copyright © 2016 by Christina Elle. All rights reserved, including the right to reproduce, distribute, or transmit in any form or by any means. For information regarding subsidiary rights, please contact the Publisher.

Select Suspense is an imprint of Entangled Publishing, LLC.

To Keith for encouraging me to chase my dreams.

And to Jameson and Bennett for giving me the reason to.

This was
so
not the way Samantha Harper wanted to start her day.
Running late to work
again
, she had just gotten her car door open when someone came up behind her.

“Gi-give me your ma-money,” a gravelly male voice stuttered. Something cold and hard dug into her lower back. “
Now
.”

A gun.
Inhaling a long gush of hot July air, she worked to slow her racing pulse and allow her training to kick in.

Keep him talking. Distract him. Buy some time to get out of the situation.

When she didn’t move, he spoke again, “Di-did you h-hear me?”

“Then hand it over.” She attempted to peer over her shoulder at the assailant, but the man pressed the gun harder into her spine, causing a slice of pain to the bone.

Wincing, she said, “I don’t think that’s a good idea.”

“There are less criminal ways of making a living. You don’t have to do this.” She’d met plenty of people at the station who had forgone crime and now lived respectable lives. “I can help you.”

Something in the way the guy spoke told her this wasn’t a regular mugging and he wasn’t a regular criminal. No, he didn’t seem like the usual drug-addicted men she’d helped book at the precinct. This one was more desperate. Frantic. Confused even.

“Are you okay?” she asked, once again trying to look over her shoulder.

There was a blip of silence where she didn’t think he was going to answer. The pressure against her back lessened, before he came to. “I…I d-don’t know what’s wrong wi-with me.” A slight tremor thrummed from where he held the gun. She caught sight of him rubbing his forehead as if suffering from a severe migraine.

She glanced up and down the vacant city street. No one outside due to the early morning hour. Only a handful of other cars parked along the curb. It was normally a quiet street. Neighbors took care of their houses, kept their hedges trimmed, and waved to one another when passing on the street. Things like muggings hardly happened in this part of the city.

The sun beat down. Her skin felt clammy. Her pastel yellow blouse suctioned to her skin like plastic wrap. The stifling air mixed with the adrenalin coursing through her veins made it difficult to breathe. And to think.

How was she going to get out of this? She didn’t stand a chance against this guy without her weapons, which were currently locked in her Honda’s trunk.

“Way to go, stupid.”
Next time try listening to Grandma Rose when she tells you to carry some items in your purse.

“Did you just call me st-stupid?” He growled and pressed the gun harder against her, causing her to take a small step forward. Then the gun full-out shook against her body, making it feel as if a mild earthquake was happening. “Two seconds,” he grunted. “Or I’m gonna b-blow y-your brains out!”

“My back,” she said without thinking.

“The gun’s pointed at my back. So technically you’d blow my back out.” She immediately snapped her mouth closed and gritted her teeth.
Stupid, big mouth.

The gun left her lower spine and landed along the base of her head with perfect precision. No shaking this time. “Better?” the man asked.

She glanced up to the heavens and exhaled through her nose. “Not really.”

“C’mon, lady, d-don’t make me do this. Just give m-me your purse.” He grabbed hold of the strap on her shoulder and started to pull.

She gripped her purse and hugged it against herself. Not that it was expensive or contained anything besides her license and credit cards. Lord knew she didn’t have much money in it. It was the fact that one day she would put away dirtbags like him. And what kind of future cop would that make her if she gave in to him now? If he got away, he would just be a statistic. One of the many addicts who died on the streets without proper help.

He pressed the gun firmly against her skull, cutting off that unpleasant memory. The dull ache increased into a slice of blinding pain, making her close her eyes.

Gritting her teeth, she prayed for Grandma Rose or one of the other members of the watch to look out their neighboring row house windows. Someone. Anyone.

Not that she’d want Grandma running out guns-a-blazin’. But she could call Martinez or Sinclair at the station. Webb was doing his rounds about this time. He could pop by.

No one came. No screaming, no sirens, nothing. Just the sounds of the city in the distance as people went about their day.

Oh God. She had to handle this thug by herself. This was really happening. And she didn’t have anything at her disposal aside from her two hands.

She bit her bottom lip. If she flung her purse into the middle of the street, enticing him to chase it, it might give her enough time to distract him. She could jump on his back, maybe knock him unconscious, and try to disarm him. Or make a run for her car and get the trunk open.

The plan wasn’t promising, but it was better than nothing.

This was it. It was now or never.

She prayed for courage and strength from her father and grandfather—two of the bravest cops she’d ever known.

Heart thundering in her chest, blood pounding in her ears, she fingered the smooth leather hanging near her waist. As she started to turn, a second voice spoke.

“Put your hands up and back away slowly.” Deep. Ominous. No-nonsense. One did not want to mess with the man who belonged to that voice.

Her eyes widened, body stilled. The ground seemed to shift beneath her sandals, but she didn’t dare move.

Where did he come from?

She didn’t stand a chance against two thugs—knowing at least one was armed—so she shot her arms toward the sky.

“Not you, Blondie,” the no-nonsense voice said. “Him.”

Him?
So the two men weren’t working together? Relieved, she released the breath she’d been holding and dropped her arms.

“Do it now,” the voice spoke again, even more fierce, almost a snarl.

The gun lifted from the back of her head.

She spun. As she’d been trained, she took in each man’s identifying characteristics.

Not much taller than her, her attacker was nondescript at about five-seven. He had dark hair from what Sam could tell by his eyebrows and wore a gray sweatshirt with the hood covering his head.

A sweatshirt in this heat?

Shaking her head, she continued her perusal. Eye color was hard to make out given his face was angled toward the street. He appeared around twenty years old. Gangly and pasty white, his body hunched over still shaking. Stark white hands were hoisted in the air, gripping a 9mm. What could make someone his age so desperate for money?

Then she zeroed in on the mountain of a man behind him.

Quite
descript
indeed. Well over six-feet, piercing blue eyes, military-cut dark brown hair, and strong jawline. The black tattoo on his neck was something. It dipped below the neckline of a white T-shirt that stretched across his broad chest. She took in the full view of his pecs, which appeared to be double the size of hers. Ignoring that fact, since really, a toddler had bigger boobs than she did, Sam focused closer on the tattoo. It was tough to decipher what it was. It looked like feathers. Maybe from a bird. She’d need to see him without his shirt to determine—

Wait a minute. What the hell was she doing? She blinked to clear her thoughts away from the man’s chest and dragged her gaze up to his.

Dark. Sinister. Like he thought he was the only person in the universe who mattered.

“You okay?” her rescuer asked. One eyebrow quirked, and he wore an expression that said saving her had been a huge inconvenience.

Plus, the looker of a man held a 9mm of his own, pressed against her assailant’s head.

Child of Fire by Harry Connolly
Beating Heart by A. M. Jenkins
Some Faces in the Crowd by Budd Schulberg
The Queen of All That Lives (The Fallen World Book 3) by Laura Thalassa
Black Dawn by Desconhecido(a)
Night of the Ninjas by Mary Pope Osborne
League of Denial by Mark Fainaru-Wada
Las sirenas del invierno by Barbara J. Zitwer
May Bird Among the Stars by Jodi Lynn Anderson, Peter Ferguson, Sammy Yuen Jr., Christopher Grassi
Jeff in Venice, Death in Varanasi by Geoff Dyer
Our partner