Read Once the Shore Online 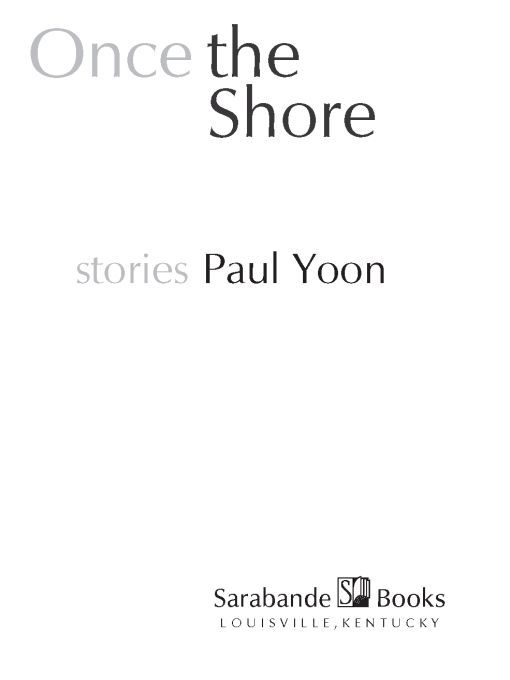 Table of Contents
Praise
Title Page
Dedication
Acknowledgements
ONCE THE SHORE
AMONG THE WRECKAGE
FACES TO THE FIRE
SO THAT THEY DO NOT HEAR US
THE WOODCARVER’S DAUGHTER
LOOK FOR ME IN THE CAMPHOR TREE
AND WE WILL BE HERE
THE HANGING LANTERNS OF IDO
AUTHOR’S NOTE
THE AUTHOR
Copyright Page
ONCE THE SHORE
A 2009 NOTABLE BOOK,
THE NEW YORK TIMES
BEST DEBUT FICTION 2009, NATIONAL PUBLIC RADIO BEST BOOK OF 2009,
PUBLISHERS WEEKLY
FAVORITE FICTION OF 2009,
LOS ANGELES TIMES
“Yoon’s prose is spare and beautiful. He can describe the sea more ways than seem possible without losing freshness, and his characters’ world is often quietly dazzling. . . . Yet the beauty of these stories is precisely in their reserve: they are mild and stark at the same time. By mild I do not mean cozy. Harshness is always close at hand here, and no one is surprised by betrayals, thefts, brutal mistakes of war. . . . Most of the collection’s characters move through events with a resignation or forbearance rare in contemporary fiction.
Once the Shore
is the work of a large and quiet talent.”
—Joan Silber,
The New York Times Book Review
“Yoon’s collection of eight richly textured stories explore the themes of family, lost love, silence, alienation, and the effects of the Japanese occupation and the Korean War on the poor communities of a small South Korean island. . . . Yoon’s stories are introspective and tender while also painting with bold strokes the details of the lives of the invisible.”
—Starred Review,
Publishers Weekly
“Yoon, a New York City-born Korean American, writes with such sparse precision as to create a visceral portrait of lost souls, each searching in worlds both living and dead. . . . Yoon’s writing results in a fully formed, deftly executed debut. The lost lives, while heartbreaking, prove illuminating in Yoon’s made-up world, so convincing and real. To read is truly to believe.”
—Terry Hong,
San Francisco Chronicle
“Though visions of violence, loss, and loneliness creep into much of
Once the Shore
, Yoon is never a cruel writer. Even in their sadness,
his stories are tender, lucent, and vital. . . . Yoon has described a perfect arc of time and geography, a whole water-bound world.”
—Zoe Slutzky,
Los Angeles Times
“
Once the Shore
heralds the arrival of a remarkable voice, a heartbreaking storyteller and chronicler of life in its infinite varieties. This reader is ready to proclaim
Once the Shore
not just the best debut of the year, but already one of its best books, period. . . .
Once the Shore
is short storytelling at its best.”
—Tod Goldberg,
Las Vegas City Life 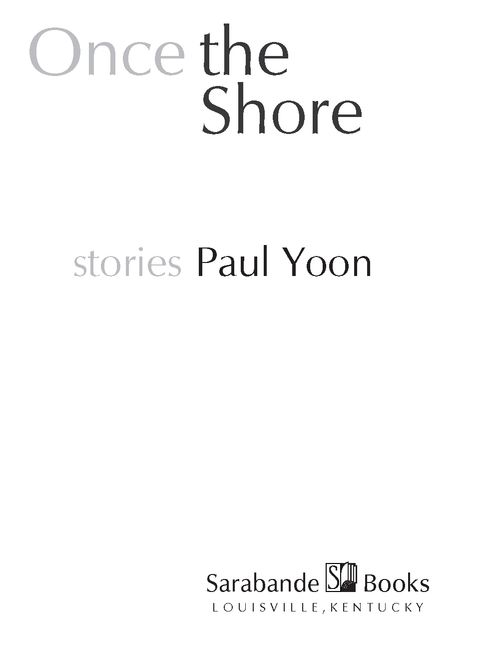 For my parents and my brother,
Chang Nam Yoon, Sung Jung Yoon, and Peter Yoon.
ACKNOWLEDGMENTS
These stories first appeared, in different form, in the following publications:
“Once the Shore”:
One Story
“Among the Wreckage”:
Glimmer Train
“Faces to the Fire”:
Salamander
“So That They Do Not Hear Us”:
Small Spiral Notebook
“The Woodcarver’s Daughter”:
American Short Fiction
“Look for Me in the Camphor Tree”:
American Short Fiction
“And We Will Be Here”:
Ploughshares
“The Hanging Lanterns of Ido”:
TriQuarterly
“Once the Shore” was reprinted in the
Best American Short Stories 2006.
“And We Will Be Here” was reprinted in the
PEN/O.Henry Prize Stories 2009
.
ONCE THE SHORE

ON THIS PARTICULAR EVENING the woman told the waiter about her husband’s hair: parted always on his right and combed finely so that each strand shone like amber from the shower he took prior to meeting her for their evening walks. “There was a time,” the woman said, “when he bathed for me and me alone.” She knew his hair—its length, smell, and color—long before she knew the rest of him. Before he left for the Pacific. Before his return and their marriage and their years together. When she opened the door it was what she noticed first. And in the heat of the remaining sun, she swore you could see a curtain of mist rising from the peak of his thin head.
At this, she laughed quietly and almost at once grew silent and looked out toward the distant hills and the coast where, long after sunset, the East China Sea lay undulant, its surface of silver reflections folding over one another like the linking of fingers.
She was in her sixties, an American from upstate New York, who was a guest at the Chosun Resort on the southern side of Solla Island. She had arrived several days ago and no one was sure how long her visit would last. She spent hours on the back porch, dressed in loose linen outfits that hid the shape of her body. She insisted on tipping, ignoring the polite reminders that such a gesture was unnecessary in this country. In her possession was a single piece of luggage, the perfect size—the hotel staff joked—for a head.
Her own hair she let fall in the most graceful of ways, all the way down past her shoulders. It clung to the backs of chairs or the cushioned elevator walls or, as the maid noticed, it stubbornly refused to sink into the depths of the shower drain, clenched in a gray-white fist.
Her husband used to maintain navigation equipment on an aircraft carrier not too far from here, she mentioned. He was dead now, a few months having passed since his heart stopped just as he woke and attempted to flip the duvet away from his body.
On that morning she bathed him with a wet cloth. Lifted his limbs and wiped his brow. His comb she dipped into the water bowl beside her and then proceeded to brush his hair, gray now, parting it on the right as he had always done since the first day they met in front of her parents’ home in a small town where, in winter, the snow was ceaseless.

The other waiters called him Jim. Short for Jiminy because a group of them watched the Disney animated classic
Pinocchio
one night in a conference room at the resort. The youngest of the waiters, they decided, resembled the cartoon cricket: thin limbs and a round head with big, wide, dark eyes. A smile as magnificent as a quarter-moon. And so they—all of them in their thirties, having worked here for much longer than the boy and used to teasing him—began saying the name out loud, calling him Jiminy, over and over again, seated in velvet plush chairs and rolling their tongues and smoking the hashish they had obtained from a Spanish backpacker in exchange for leftover food. They had difficulty pronouncing the name. The boy corrected them, using three distinct syllables. “Easier to say ‘Jim,’” he told them, and they nodded with a drug-induced acquiescence.
He was twenty-six and originally from the mainland, seventy kilometers north, where his parents and brother still remained. After attending the university in Seoul, he went on to military duty.
It was during training exercises at sea that he first saw the coasts of the island. By boat he and the other soldiers his age circled it, marveling at the bright foliage and Tamra Mountain at its center, once a volcano, which rose nearly two thousand meters. Cars the size of pebbles moved along the highway, it seemed, without effort, without anywhere really to go. There, they were told by an officer, the distance from one destination
to another never took longer than an hour by car, from the waterfalls, hiking trails, the caves, to the beaches and the mountain’s peak. This fact stayed with him, long after his duty, long after he saw the island again through an airplane window as he arrived to look for work. And it was, a year later, what he told his diners.
His brother, a fisherman, often teased him about working at a resort. But he couldn’t imagine working anywhere else. The snug white jacket they were required to wear like a second layer of skin. The sound of uncorking a bottle of wine in front of his tables. The warmth of dinner plates. Here he met guests from all parts of this world. And almost always the food was served outdoors on a long porch that faced two hills and the East China Sea. He was, every night, witness to the setting sun. And in all of these patterns he was assured of an ineffable logic that at once bound him to the resort property and at the same time provided him with a sense of openness and possibility.
Until last night, as he stood behind the seated American widow. Though it wasn’t her, exactly. It wasn’t the way the woman related the story of her husband’s hair, to which he tried very hard to listen. Or the way the sun wavered on the crest of a hill, as though rather than going down it had decided to pitch and roll along the slope.
It wasn’t any one of these things.
It was, in fact, the manager of the resort—a man who was very fond of Jim—who led him into his office in the middle of
dinner and told him that his brother, while catching tuna, as he had been doing for the past few years for their uncle’s company, was killed when a United States submarine divided the Pacific Ocean for a moment as it surfaced, causing a crater of cloudy water to bloom, the nose of this great creature gasping for air while its body collided against what could have easily been a buoy or some type of detritus.
But what keeled and snapped upon impact was a fishing boat. And within it a crew of fishermen. Their bodies, once broken, sunk into a dark depth, their limbs positioned, without effort, in the most graceful forms known to any dancer.