Read Once We Were Brothers Online

Once We Were Brothers 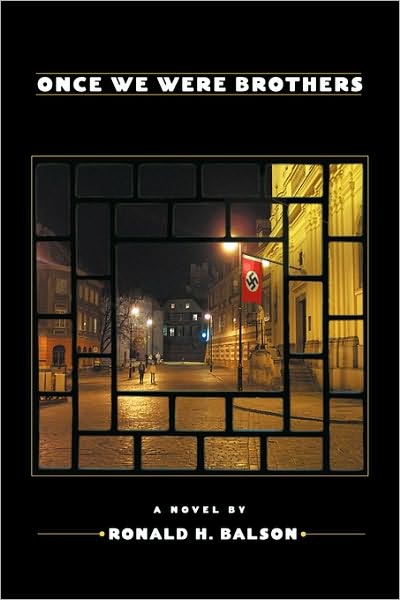 Once We Were Brothers

This is a work of fiction. The principal characters of the novel, both in Europe and America, are products of my imagination. Ben Solomon, Catherine Lockhart, Liam Taggart, Father Janofski, Otto Piatek and Elliot Rosenzweig are purely fictional and bear no relation to any person living or dead. Similarly, the law firms, attorneys and judges referred to herein are fictional, as is the St. Mary’s Ascension Church. The insurance companies, although they may have common names, are purely fictional. That being said, the major historical figures and the historical settings are intended to be accurately portrayed. I have endeavored to be true to the war’s chronology and the events which affected the fictional characters.

Ben Solomon stood before his bathroom mirror fumbling with his bow tie. He was eighty-three years old and getting dressed for Judgment Day. Years had come and gone since he had last worn his tuxedo, but then, Judgment Day was a black tie affair.

He uttered a Polish phrase to the man in the mirror and reached into his pocket to re-examine his pricey ticket.

Lyric Opera of Chicago. Opening Night Gala, September 26, 2004.
La Forza Del Destino
.
Main Floor, Aisle 2, Row kk, Seat 103 –
a seat he did not intend to occupy. Truth be told, he didn’t care much for opera. The ticket had set him back five hundred dollars, a goodly sum for a pensioner.

He pulled back the cuff of his shirtsleeve to check the time on his watch, a silver-band Citizen given to him when he retired from the Chicago Park District eight years ago. 4:30 p.m. Still two hours until the doors would open. He walked into his living room.

The windows of his modest one-bedroom apartment faced east, toward Lake Michigan and the row of condominium towers that stretched north in a line from the Loop to Thorndale Avenue like a stand of Midwest corn. The late afternoon sun laid a track of shadows across Lake Shore Drive and onto the lush grass of the Waveland Golf Course, where he’d worked as a starter for almost fifty years. To his right, in the mirrored calm of Belmont Harbor, the luxury cruisers rested comfortably in their slips. He lingered. How he loved that view. He conceded that he might be looking at it for the last time.

Once more he checked his appearance in the mirror. He asked Hannah if he looked all right. Was he dapper? He wished she were there to answer.

Underneath his sweaters, in the bottom drawer of his bureau, lay a cardboard cigar box. Setting the box on the bureau top, he lifted the lid and removed a German P-08 Lugar, World War II vintage, in mint condition, purchased at an antique gun show for $1250. Another hit to his savings account. He stuffed the pistol in his belt beneath his cummerbund.

5:45 p.m. Time to walk to the corner, flag a southbound taxi and join up with the glitterati at the “undisputed jewel of the social season.”

In his dressing room on the second story of his Winnetka mansion, a generous four-acre estate set high on a bluff overlooking the lake, Elliot Rosenzweig stood fumbling with his cuff links. “Jennifer,” he called out, “would you come help me, please?”

The young medical student, sparkling in her formal evening gown, breezed into the master suite and to the side of her grandfather who was grappling with his French cuffs.

He watched her hands easily fasten the gold links. So supple, so young. Soon to be a surgeon’s hands, he thought.

Beaming with profound adoration, he kissed her on the forehead. “I’m so proud of you,” he said.

“For fastening your cuffs?”

“For being my angel.”

“I love you, too, Popi.” She twirled and headed for the closet door.

“That’s a beautiful dress,” he called after her. “I like it.”

“You should,” she said over her shoulder, “it cost you a fortune. Nonna bought it for me at Giselle’s. It’s an original.”

She lifted his Armani jacket from the hanger and held it for him as he slipped his arms through the sleeves. Smiling, she gave a short tug on his lapels and took a step back.

“You look very handsome tonight.” She kissed him on his cheek. “Now we need to go. All our friends are waiting.”

Together, hand in hand, they joined the rest of their entourage under the pink stone portico where the group filed into two limousines that would carry them downtown to the Civic Opera House. The iron security gates parted and the white limousines glided forward onto Sheridan Road and toward Chicago’s Loop.

Festival banners hung from the art deco columns of the Civic Opera House’s mezzanine and multicolored buntings looped from the balustrades, all gaily surrounding the opera celebrants gathered in the foyer below. Costumed servers carried Champagne and hors d’oeuvres on silver platters. In the corner, a sub-group of the Lyric Orchestra played selections from Rossini overtures.

Raising her voice to be heard above the din of conversations, Jennifer asked, “How many years have you been coming to opening night, Popi?” She smiled as she accepted a canapé from an Elizabethan palace guard.

“Since 1958, Angel. Although in those days they didn’t pay so much attention to me.”

“You mean you weren’t a Platinum Grand Benefactor?”

“I always gave what I could to support the arts, but…” His answer was interrupted by the approach of Chicago’s mayor and first lady, who were being shuttled about by Lyric’s artistic director.

“Thank you, Mr. Mayor,” he answered in the noisy hall. “It always brightens my day to see you and Edith.” Rosenzweig flashed a congenial smile as he warmly took the hand of Chicago’s first lady.

“Quite an event, the Lyric opening, thanks to you and the Board,” said Mayor Burton. “The city owes you a great deal, Elliot. You’re a priceless resource.”

“Maybe
not
so priceless, John.” And the two of them laughed.

While they continued to exchange flatteries, Ben Solomon quietly wound his way through the crowd toward the Grand Benefactor. He was oblivious to the music. He heard no conversations. He saw only his target. Making his way across the floor, he declined a flute of Champagne from a seventeenth-century Italian peasant girl and felt for the Lugar in his belt. The Lyric quartet pizzicatoed through the delightful strains of
La gazza ladra.

He paused until the mayor and his wife had moved on to the next grouping and walked directly to Rosenzweig, his heart pounding like a pile driver.

“What did you do with all that jewelry?” he said inches from Rosenzweig’s face.

“Excuse me, sir?” said the esteemed donor with a smile, unsure if this was part of a staged repertoire. Perhaps an opera joke?

But there was no sign of frivolity. “Just curious,” Solomon said. “I asked you what you did with the jewelry, you know, the watches, diamond bracelets, wedding bands. You had a whole chest full. Don’t you remember?”

Rosenzweig looked to his wife and his granddaughter and shrugged.

“I’m afraid I don’t know what you’re talking about, sir.”

In a flash, Solomon drew the polished Lugar and pressed the barrel hard against Rosenzweig’s forehead. A woman screamed. The crowd immediately backpedaled into a large ring.

“Recognize this gun, Otto? Should be real familiar to a Nazi officer,” Solomon said, waving the crowd away with his left arm. “Look at me, Otto. It’s Ben Solomon. Here we are, together again, just like when we were kids. Never thought you’d see me again, did you,
Hauptscharfuhrer Piatek
?”

Rosenzweig held his hands up in conciliation. The room was silent except for the words he delivered, slowly and evenly.

“You’ve made a mistake, sir. My name is Elliot Rosenzweig. It’s not Otto. Or Piatek. I’ve never been a Nazi. In fact sir, I am a camp survivor.”

Very slowly, he held out his left arm. “Jennifer, undo my cuff link and roll up my sleeve.”

As she did, his forearm displayed the blackened tattoo: A93554.

The gunman considered the offering, and then sneered. “You’re a lying Nazi murderer and I can see the fear in your eyes,
hauptscharfuhrer
. Scream and cry and beg, Otto, like the innocent women and children who cowered before you. Mothers and fathers and grandparents. People who never hurt a soul. And the babies. All the children.” He gestured wildly to the stunned crowd. “Tell them who you really are. Look at them all. They’re listening. The masquerade is finished.”

From out of nowhere, Solomon was blind-sided and knocked to the marble floor. The gun slid along the tiles and came to rest against the staircase. Tackled by a Chicago Bear linebacker in formal attire, Solomon lay curled on the floor, weeping, his head shuttered in his forearms.

Elliot Rosenzweig agreed to appear live on Monday morning’s local news program. Three television cameras were positioned in his paneled library where Elliot sat confidently on his leather couch beside the fireplace. To his left, leaded bay windows framed a riparian vista: his velvet lawn leading to the bluffs and the Lake Michigan shore fifty feet below. The overlook was magnificent.

Elliot had given television interviews in his library many times over the years and as recently as six weeks past, when he announced plans for one of his foundations to support an exchange of young musicians from Beijing.

Behind the philanthropist sat a wall of books and mementos, pictures with the high and mighty, gifts from foreign dignitaries, and in the center, a framed key to the City of Chicago, presented to him in 2001 by the mayor and the City Council. There were no religious symbols in his home. He once commented that he abandoned God after God abandoned him in the concentration camps. He no longer practiced his faith.

“Elliot, thank you for agreeing to come on with us this morning,” the newswoman said. “What a frightening experience that must have been for you and your family last Saturday night. I know it was for me. I was standing just across the hall.”

“Yes, it was, Carol.” He smiled warmly. The cameras panned to encompass the choppy lake through the library windows. Sailboats tilted in the late September winds. “I was scared to death for my granddaughter, who was standing right beside me.”

“Do you have any explanation for why this man assaulted you or shouted such a wild accusation?”

“None whatsoever. The poor, disturbed fellow obviously has me confused with someone else. A man named Otto, who apparently was, or is, a Nazi.”

“We’ve learned that Mr. Solomon was a prisoner in the concentration camps. And now we know that you were, as well. That was quite a surprise when your granddaughter exposed your arm. I don’t think that part of your life is something you’ve chosen to share with the public.”

“It’s not. Once liberated, I never wanted to discuss it again. It’s behind me. I’ve been in Chicago now for fifty-six years. I’ve made my life here, I have my businesses here and my family is here. I’ve been very blessed in many ways.”

“Otto Piatek. Does that name mean anything to you?”

Aurora's Promise by Eve Jameson
Clockwork Heart: Clockwork Love, Book 1 by Heidi Cullinan
Because You Are Mine Part V: Because I Said So by Beth Kery
QR Code Killer by Shanna Hatfield
A Witch in Time by Nora Lee
In Search of Our Mothers' Gardens by Alice Walker
Undercurrent by Michelle Griep
Construction Beauty Queen by Sara Daniel
Men in Space by Tom McCarthy
Cade: Fire And Ice: A Second Chance Hockey Romance by Hart, Alana, Lake, Jessica
Our partner