Read One Mile Under Online 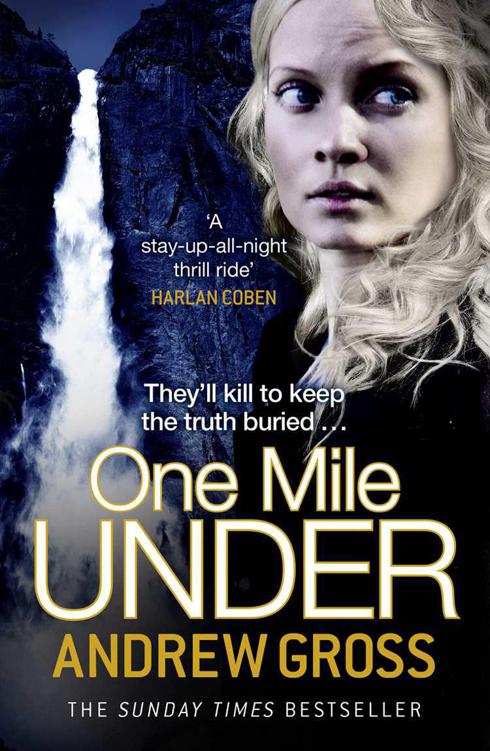 An imprint of HarperCollins
Publishers

Andrew Gross asserts the moral right to be identified as the author of this work.

THE CRADLE
CHAPTER ONE

Dani Whalen noticed the first slivers of whitewater ahead on the Roaring Fork River, the current picking up.

“Okay,” she called out to the eight people in helmets and life vests aboard her raft, “it’s been pretty much a nature hike so far. Anyone ready for a little fun?”

As if on cue, the young couple from L.A. decked out in their bright Lululemons, Maury and Steve from Atlanta, he just a month into his retirement from a sales job, and the family from Michigan with their kids in the bow, all shouted back in unison, “
We
are!” and “Let’s do it!”

“Good to hear!” Dani said, catching the sight of spray up ahead from the opening set of rapids known as Entrance Exam, “’cause you’ve come to the right place.”

Dani was a whitewater guide along the stretch of the river known as Slaughterhouse Falls, outside Aspen, Colorado. And by “fun,” she meant navigating the series of eight Class Three and Four rapids that were the main draw of the river’s four-mile run. Not that there was much real danger. They were all well-protected, of course, and Dani had done this run hundreds of times with barely a hitch. But the first sign of froth rising usually did engender a blanched face or two—Class Fours had a way of doing that to first-timers. But Dani knew exactly how to get them going as well.

On any morning, she could point to an eagle soaring above the tree line, or a long-branch elk with its doe along the river’s edge; or a silver trout streaking underneath them in the current, which was definitely picking up now. That’s why she loved what she did. That, and the triumphant yelps and whoops that were always a part of being shot out of Crossbow, icy water cascading all over you.

But it was the thrill of whitewater that was truly in her blood.

She had been a geology major back in college, back east at Bowdoin in Maine, and she could easily have been in med school or doing fourteen-hours days on Wall Street like a lot of her friends, probably making more in one month than what she pulled in in a season out here. But this river was in her blood. She’d grown up on it. She knew most anyone who had anything to do with it. After college she came back for the summer, and started earning money doing for work what she’d always done for love, and entering a few competitions. She knew she wasn’t exactly building a real life for herself remaining out here—guiding in the summer, teaching snowboarding to the youngsters in the winter—certainly not a career. Her dad was an orthopedic surgeon, at Brigham and Women’s Hospital back in Boston, but he was in Chile right now on a teaching fellowship. Her older sister, Aggie, was in med school in Austin, and her younger brother, Rick, the real brain of the family, was studying 3-D graphic engineering at Stanford.

But Dani loved what she was doing—not to mention she could make it over the Gallows, a Class Five on the Colorado River with a twenty-foot drop, as well as any of the guys. And for her there was no payback better than the wide-eyed thrill and the yelps of exhilaration from a family being shot out of Cartwheel, with its 180-degree spin, to remind her of how much happier she was out here than back east behind a desk somewhere. In her skin-hugging neoprene vest and Oakley shades, her sun-streaked curly blond hair up in a scrunchie, her blue eyes focused on the river up ahead, every day was a reminder, that for the time being at least, she’d made the right choice.

That morning, she was handling the early morning run. Out at eight, back by noon. It was one of those picture-perfect Colorado days: the sky blue, the scent of aspens filling your nostrils, whitewater biting at you from the late spring runoff. Megan and Harlan, nine and eleven, were up in front with their parents right behind them. Dani didn’t want to scare them, though navigating the Falls pushing around two thousand cubic feet per second did require a bit of technique. Everyone was laughing, pitching in paddling, enjoying the ride. Her job was to give them the time of their lives.

As they made their way around Jake’s Bend, for the first time they could see the froth from Entrance Exam rising into the air. That’s when you knew you didn’t come here for a nature ride.

“
Look!
” Harlan was the first to point up ahead.

“I don’t know …” Dani said teasingly, “those Exams are looking a little angry this morning. I hope everyone studied up!” It was a bit of a performance, of course, to build the tension. The real trick was not letting them realize that. She always loved catching those first looks of anxiousness on everyone’s faces about what lay ahead.

“We may lose a few of you over the side,” she said, “so remember what I said if you end up going in.” Feet-first, and not to struggle against the current. And if they got trapped in an eddy, to just relax, not fight it, and sooner or later it would pop you back out. Dani had to tell them all that—like a flight attendant pointing out the exits on a plane—but in three years of guiding she hadn’t had an incident yet. “You people on the left, I’m gonna need a little help today, okay? I need you to paddle like crazy as soon as I give the word. Otherwise, we won’t make it through. You all up for that?”

They all took hold of their paddles and responded with nods of determination. “
We are!
”

“Good,” Dani said, maneuvering the raft down the left side of the rapids.