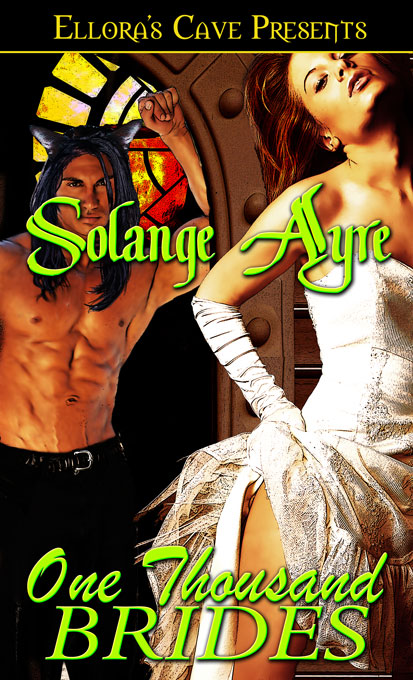 Dedicated to my wonderful critique partners (in alphabetical order by last name): Christy C., Edwina C., Ellen D., Dianne H., Chris N., and Nancy S. Thank you, darlings! I promise we’ll have a lovely house party on Ayriana as soon as I get back to Earth.

What sadist put a bakery next to a bridal shop?
Jan tried to ignore the enticing aroma of fresh bread as she hurried into Bev’s Bridal Boutique. Her rumbling stomach reminded her that she’d had nothing but soup for lunch.

“I’m Janis Stone,” she said, approaching the counter. “I’d like to try my dress on, please.”

In the dressing room, the smiling attendant helped her into the longline corset with its built-in bra. Through strenuous exercise and dieting, Jan had managed to lose thirty-two pounds over the last three months. She said a little prayer as the attendant lowered the clouds of white satin over her head.
Please God, make it fit this time.

“I’m sorry,” the attendant said. “I just can’t get the last two buttons done—the ones at your waist. I wish you’d let me order the size sixteen.”

Jan shook her head, thinking of the day when she and Gary had chosen the dress. “All that white makes you look enormous,” he’d said, frowning. “My God, Jan, my mother had five children and still wears a size six.”

She’d come close to calling off the wedding. He’d apologized—but the remark still rankled. She’d decided to go on a diet.

After all, she was thirty-nine years old, ordinary looking and a little too heavy. No wonder she’d never been married. Gary was her last chance.

She’d pictured herself married since age ten. When she finally received an engagement ring, it had been such a pleasure to show it to the other women at work, to e-mail her old college roommates, to call her mother—who’d cried with joy.

For years she’d brought gifts to her friends’ wedding showers. Exclaimed over their dresses. Danced at their weddings while keeping a sharp eye out for the Mr. Right who always seemed to be partnering younger, more petite women.

Finally, after all these years, it was her turn. She could hardly wait for her big day. The candle-lit ceremony, the friends and family from out of town, her attendants in their pale pink. She was looking forward to every wonderfully mundane detail.

Even The Chicken Dance.

Jan hummed along with the music being piped through the store. Surely those last two buttons would close if she went on a liquid diet for the next week…

A harsh burst of static came over the speaker. The sound hurt Janis’ ears and she winced.

“People of Earth.” The arrogant voice sounded much like a BBC announcer. “I am Primus Taddus of the Black-Striped Pelt, a council member of the colonization ship
Ecstasy of Generations
.”

Jan turned to the attendant, who looked every bit as puzzled as Jan felt. “It’s got to be a joke,” Jan whispered.

The voice continued, “Necessity has compelled us to seek your help. In the fourth year of our seven-year journey, a short stay on a planetary satellite exposed us to an unknown virus. To our great sorrow, every one of our females perished.

“We require wives. A review of the populated planets in your region revealed that Earth females are the closest genetically to our species. Thus we have decided to take one thousand human females with us.

“We carefully chose fertile females under age forty, childless and not presently pair-bonded. Do not be concerned for your compatriots—they will have rich and rewarding lives in a far more enlightened society than your own.

“We regret the necessity for our actions and thank you most sincerely for your time and trouble.”

As soon as the voice cut off, dizziness flooded Janis’ senses. She tried to catch hold of the chair in the dressing room as she fell to her knees. As everything went dark, she thought,
If I tear this dress, I’ll shoot myself.

Pleasure danced down every nerve, from the top of her head to the soles of her feet. Jan moaned deep in her throat. She wanted to stretch luxuriously, like a cat basking in sunlight but sleep held her immobile. A tingling sensation pulsed through her, arousing her nipples. They grew heavy and engorged, as though a lover had suckled them for an hour. The sensual awakening flew down to her pelvis, which suffused with heat as delight rippled through her. Her clit swelled and her pussy ached to be filled.

The wonderful titillation went on and on, varying in intensity, increasing the thrill. The teasing concentrated on her clit. She was about to explode when the stimulation switched to her hot, slick channel. Moving hard, like a vigorous lover, the sensation then muted to the tentative touch of one finger. Every nerve spiked to attention, starving for more.

Suddenly a thousand tiny tongues lapped at her, stimulating her nether lips, her clit and the tight rosebud of her ass.

A headlong rush toward orgasm, like speeding down the world’s longest, smoothest roller coaster. Everything opened at once, her pussy welcoming all sensations, drowning in them, overflowing. She tumbled through huge waves of pleasure that left her shuddering and swooning as they receded. She drew in a great gasp of air and her eyes flew open.

She’d just had an incredibly intense orgasm…from her mind alone. No one was close enough to touch her, yet her pussy pulsed as though the world’s greatest lover had given her the world’s most intense fucking.

Where am I? What’s happening to me?
She shivered, her heart pounding with fear.

The narrow bed, the bright, recessed lights, the smell of antiseptic were all familiar.

Is it a hospital? That guy looks a little strange, though. Am I on some weird hallucinogen?

A man lounged against the doorway, studying what looked like a handheld electronic device. He glanced up. “Janis Stone. You’re awake.” Smiling, he approached with catlike grace.

He was slender and tall, well over six feet in height. His long hair, hanging slightly past his shoulders, was a mass of dark brown varied with lighter patches of tan.

Two furry peaks poked through his hair at the top of his head.
Bad hair day?
she wondered.
No, those are his ears. He’s not a man. He’s an alien.

The fog began to clear from her brain. She strained to remember the last thing she’d heard. Her breathing quickened.

“Secondus Delos of the Tawny-Spotted Pelt. Your physician.” His pale blue eyes studied her. Jan focused on them, noting they were rounder than human eyes, with long, narrow pupils. Still, they held a kindly expression. “How are you feeling?” His deep, rich voice flowed over her like warm cream, calming and soothing her.

How am I feeling? After having the best orgasm of my life? But I doubt he’s asking about my sexual health.

“Disoriented,” she said at last. Her voice was hoarse, as though she hadn’t spoken in a long time.

“Not surprising. Some of that’s the pain medication. Rest assured, you’re going to be feeling much better soon.”

The doctor wore a sleeveless blue tunic that revealed the powerful muscles of his shoulders and arms. Sturdy legs were encased in dark blue tights.

He sat casually on the side of her bed and took her wrist in his large hand.

He’s an alien and he’s touching me.
Her trembling increased.

“Don’t worry, I’m just taking your pulse.” His smile gave her a warm feeling, until she noticed his fang-shaped incisors.

In spite of the fact that he had two eyes, a nose and a mouth, something about his face didn’t quite add up to “human”. Maybe it was his small nose. Or the stiff hairs under his nose that were more like a cat’s whiskers than a man’s mustache.

“I’ve been worried about you,” he continued. “You took the Transition hard. Most of the other Brides have been awake for two or three days.”

Other Brides?
“How long have I been here?” she asked, her alarm growing.

“Seven weeks.” He grasped her shoulder with a comforting hand. “Do you remember the broadcast? Do you know why you’re here?”

In the back of her mind she’d been aware of the knowledge but hadn’t wanted to face it. “So it’s all true then?” She wasn’t sure whether she should scream hysterically or break into sobs.

None of that will do any good. Just stay calm.
She took deep breaths and tried to relax.

“It’s true.” His eyes contained attractive little flecks of darker blue. He leaned closer and she received an enticing whiff of his scent. Some of it was clean, healthy male but there was an underlying addition…cocoa, maybe? Whatever the scent, she wanted to lick him all over.
Lick him? That’s got to be the drugs.

“I’m sure you have questions. Go ahead and ask. I’ve been appointed Official Liaison to the Brides.”

Official liaison or kidnapping conspirator?
“How nice for you. Did you get a pay raise?”

A twitch of Dr. Delos’ mouth showed that he’d caught her sarcasm. “Our economic incentives don’t work quite the same way as in your culture. Anyway the answer is no. I volunteered solely for the pleasure of working with beautiful females.”

Too bad you got stuck with me, then.
“The person who spoke on the broadcast said you wanted wives.” Was she really expected to marry an alien? Someone like the doctor, with furry ears?

To her shock she realized the idea intrigued her.
Maybe it has something to do with that unusual wake-up call.

Real Life for Kids: Knowing Jesus as Your Savior by Rod Baker
Talk Turkey by Bru Baker
Ganache with Panache: Book 2 in The Chocolate Cafe Series by Valley Sams
River's End by Nora Roberts
Marked By the Wolf (Werewolf Romance) by Mac Flynn
High as the Horses' Bridles: A Novel by Scott Cheshire
Death by Scones by Jennifer Fischetto
Jennifer Government: A Novel by Max Barry
Murder in the Paperback Parlor by Ellery Adams
Possession by H.M. McQueen
Our partner