Read Ongoingness: The End of a Diary Online

Ongoingness: The End of a Diary 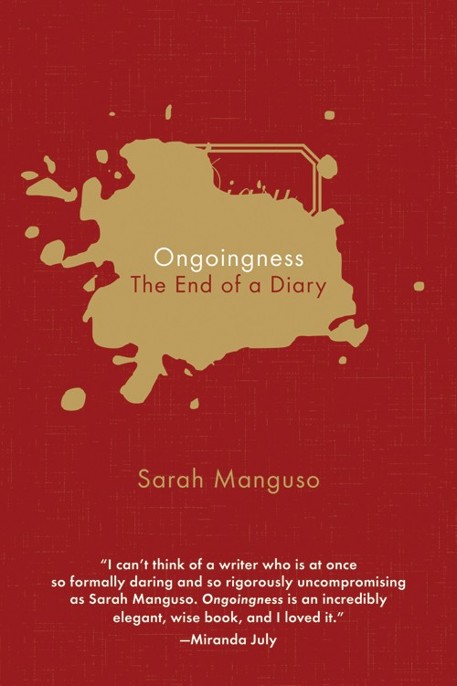 “After I had my son I looked everywhere for a book that might serve as some kind of mirror. I bought so many silly books. Now I see what the problem was: I wanted a book about time—about mortality. I can’t think of a writer who is at once so experimentally daring and so rigorously uncompromising as Sarah Manguso.
Ongoingness
is an incredibly elegant, wise book, and I loved it.”

“The memoir form is shaken up and reinvented in this brilliant meditation on time and record-keeping.
Ongoingness
is a short book but there’s nothing small about it. Sarah Manguso covers vast territory with immense subtlety and enviable wit.”

“Sarah Manguso’s personal meditation on time and memory begins at the center of a dilemma: how to let time go by without losing the life it contains.
Ongoingness
is a diary turned inside out, an answer to the writer’s question, ‘what do I do with all the words of my life.’ It’s a quiet argument for letting go and going on.”

“It seemed scarcely possible that, after
The Two Kinds of Decay
and
The Guardians
, Sarah Manguso’s work could get more urgent, but somehow it has.
Ongoingness
confronts the deepest processes and myths of life and death: birth, marriage, illness, mourning, motherhood, art. Underwriting this book, as is true of all of Manguso’s books, is writing itself. Or, rather, the writing is about itself in the best, most vital sense. Our author/narrator/speaker/heroine is never not asking the most fundamental question, namely, Why live? The seriousness of the inquiry gives this book extraordinary purpose, momentum, and value. I am in awe.”

The Two Kinds of Decay

Hard to Admit and Harder to Escape

The Captain Lands in Paradise

the end of a diary

The quoted lines on
page 7
are excerpted from “When You Are Old” by William Butler Yeats.

This publication is made possible, in part, by the voters of Minnesota through a Minnesota State Arts Board Operating Support grant, thanks to a legislative appropriation from the arts and cultural heritage fund, and through a grant from the Wells Fargo Foundation Minnesota. Significant support has also been provided by Target, the McKnight Foundation, Amazon.com, and other generous contributions from foundations, corporations, and individuals. To these organizations and individuals we offer our heartfelt thanks.

I didn’t want to lose anything. That was my main problem. I couldn’t face the end of a day without a record of everything that had ever happened.

I wrote about myself so I wouldn’t become paralyzed by rumination—so I could stop thinking about what had happened and be done with it.

More than that, I wrote so I could say I was truly paying attention. Experience in itself wasn’t enough. The diary was my defense against waking up at the end of my life and realizing I’d missed it.

Imagining life without the diary, even one week without it, spurred a panic that I might as well be dead. ♦

The trouble was that I failed to record so much.

I’d write about a few moments, but the surrounding time—there was so much of it! So much apparent
nothing
I ignored, that I treated as empty time between the memorable moments.

Despite my continuous effort—in public, in private, in the middle of the night, and in moving vehicles—I knew I couldn’t replicate my whole life in language. I knew that most of it would follow my body into oblivion.

From the beginning, I knew the diary wasn’t working, but I couldn’t stop writing. I couldn’t think of any other way to avoid getting lost in time. ♦

I tried to record each moment, but time isn’t made of moments; it contains moments. There is more to it than moments.

I wanted to comprehend my own position in time so I could use my evolving self as completely and as usefully as possible. I didn’t want to go lurching around, half-awake, unaware of the work I owed the world, work I didn’t want to live without doing. ♦

To write a diary is to make a series of choices about what to omit, what to forget.

A memorable sandwich, an unmemorable flight of stairs. A memorable bit of conversation surrounded by chatter that no one records. ♦

Why do people keep diaries? Prisoners, explorers, regents—of course. But there are so many others, nobly addressing the entire future.

I was one of the others, but I wasn’t writing to anyone.

Inside the cover of one notebook I copied some lines of poetry as a love letter to my future self:

When you are old and grey and full of sleep
,

And nodding by the fire, take down this book
,

And slowly read, and dream of the soft look

Your eyes had once, and of their shadows deep …
♦

Hypergraphia
, the overwhelming urge to write.
Graphomania
, the obsessive impulse to write. Look up the famous cases if you’re interested. Nothing about them ever helped me with my problem. ♦

Like many girls I was given a diary. The book bore pictures of teddy bears on every page. I wrote in it every now and then out of a sense of duty.

When I was nine I brought the diary to the beach where I went with my parents every summer. My mother reminded me to write in it each night. I didn’t enjoy the task and remember her dictating lines like
In the old town center, the shops keep their doors open for all to see.

I didn’t need a diary then. I wasn’t yet aware of how much I was forgetting. ♦

I meet people who consider diary keeping as virtuous as daily exercise or prayer or charity.
I’ve tried for years
, they say.
I start a diary every January.
Or
I don’t have the discipline.
They imagine I have willpower or strength of character.
It would be harder for me not to write it
, I try to explain. It doesn’t feel like (in one friend’s words)
a big fat piece of homework.
I write the diary instead of taking exercise, performing remunerative work, or volunteering my time to the unlucky. It’s a vice. ♦

I started keeping the diary in earnest when I started finding myself in moments that were too full.

At an art opening in the late eighties, I held a plastic cup of wine and stood in front of a painting next to a friend I loved. It was all too much.

It wasn’t the first time I’d had to do that, but as I wrote about the art opening I realized my self-documentation would have to become a daily (more than daily?) practice.

Today was very full, but the problem isn’t today. It’s tomorrow. I’d be able to recover from today if it weren’t for tomorrow. There should be extra days, buffer days, between the real days.

If I allowed myself to drift through nondocumented time for more than a day, I feared, I’d be swept up, no longer able to remember the purpose of continuing.

The first volume, a yellow spiral-bound notebook, was disguised as my math notebook, the word
Trigonometry
printed in black on the cover, and on every notebook thereafter, I wrote the name of my current math course. During my first semester of college, I created a digital document called
Differential Equations.
During my second semester, not enrolled in linear algebra as planned (I got a C+ in differential equations), I opened a new file,
Differential Equations 1993.
Every year since then I’ve opened a new one, hiding everything I thought was important in a file named after a branch of higher math, where, as only a C+ student would, I thought no one would ever look for it.

I still write in little notebooks in diners and on trains, and, after a vigorous editing on the page, I transcribe the remains into
Differential Equations 2014.
♦

One afternoon I declined a ride from one city to another with a friend who didn’t survive his twenties. I didn’t think I’d survive the afternoon without spending four hours on the bus back to college thinking and writing about what had happened during my trip. My memory was too full. It was an emergency. I had to empty the reservoir right away.

Nothing had happened, but I still needed four hours to get it into the notebook. ♦

I revised my diary during the day, days later, and sometimes years later, with absolute certainty I never wanted anyone to read it.

Everyone I’ve told finds the idea of my revisions perverse, but if I didn’t get things down right, the diary would have been a piece of waste instead of an authentic record of my life. I wrote it to stand for me utterly. ♦

Because I can’t reliably answer that question, for twenty years, every day, I wrote down what happened. After I finish writing this sentence I’ll do it again.

I’ll open the document, scroll down to the end, think to myself that I should write a macro to open the document at the end (which is never the end) instead of the beginning, then look at the keyboard. Then I’ll type the date in numerals and points. Underneath, I’ll type something in words. Then I’ll close the file. I’ll reopen it at least once on most days. ♦

I often prefer writers’ diaries to their work written intentionally for publication. It’s as if I want the information without the obstacles of style or form. But of course all writing possesses style and form, and in good writing they aren’t obstacles.

Another friend said,
I want to write sentences that seem as if no one wrote them.
The goal being the creation of a pure delivery system, without the distraction of a style. The goal being a form no one notices, the creation of what seems like pure feeling, not of what seems like a vehicle for a feeling. Language as pure experience, pure memory. I too wanted to achieve that impossible effect. ♦

The first time anyone else read the diary was 1992. On the day I moved into my freshman college dormitory, I reached into the big box of sweaters and diaries and found … sweaters.

We didn’t think you’d be needing those
, said my father. My two new roommates and their parents were there. I didn’t say anything. At that time, my diary was mostly about hating my mother. ♦

Two years later, I lent my laptop to my boyfriend, who needed to write five papers in one night, and in the morning, he returned the computer with a little
Word
icon right in the middle of my otherwise empty desktop.
Please Read Me, Sarah
, he’d called it. The document began:
I just read your diary. All 75 pages of it …
I don’t remember how it went other than that he not only failed to apologize but represented the act as a gesture of compassion, since I so clearly needed his expert help in evolving into a better person.