Read Out of Exodia Online 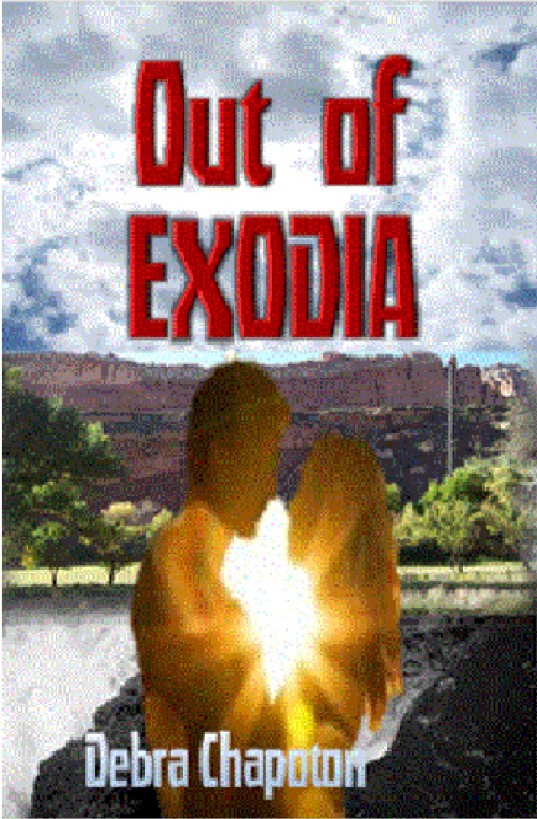 Book 2 of the Exodia
Ledgers

This is a work of fiction. Names,
characters, places, and incidents either are the product of the
author’s imagination or are used fictitiously.

Other works by Debra
Chapoton

Chapter 1 On the Edge of
Escape

From the 8th page of the
first Ledger:

He is like a weaned child in
his manner, quiet and still.

They put their hope in
him.

I CLIMB DOWN, duck through the crowd,
and run nearer to the edge. I clasp my hands over my ears to muffle
the painful cries. I see ribbons of blue diminishing into the
depths, but I’m not close enough to see the bottom. The crashing
sounds of metal are distant pings underscored with explosions. The
thump of each body hitting the rocks so far below is not audible
even to me, but I know when each scream breaks off.

Lydia and her mother, Jenny, come up on
either side of me. Lydia pulls my arms down from my ears and takes
hold of my hand. There is only a single breath of silence before a
cheer goes up.

The joy is palpable. From their sleds
and packs people pull out banners and flags. Children grab the ends
and parade around while adults shout and sing and whistle and make
more noise than a thousand lions.

Mira leads dozens of women in a dance
line that follows the children as they snake among us. When she
passes us she pulls Lydia away and I hate that I’m no longer
touching her hand. Without her euphoria coursing through my being I
feel as if my special gemfry powers are shutting down.

Suddenly the shouts and claps fade to
nothing. I spot a large group of Reds who have stopped their
jubilation and appear to be marching toward me. As they pass
through the crowd people act bewildered, ashamed, even horrified.
All eyes are riveted on this group. The spontaneous excitement of
our victory over the Blues has morphed into a wretched misery. Too
quiet.

I shudder and immediately a deep voice
in the threatening group growls out, “Our able hero twinges,
Jenny.”

The deep canyon is only a few steps
behind me. I could end this. The long fall would last only seconds.
Seconds that I’d fill with thoughts of Lydia, my son, my failure to
take these people, my people, to a land where they’d be
free.

But the angry man’s
statement revolves in my head, churning out fragments:
their jeers, Hebrew agony, an intense job.
I’ve almost got the message.

The Mourners are a few feet in front of
me. Their weapons are drawn. They’re ready to give me the
punishment I deserve. For my life. For my murders.

Ronel’s silvery cloud moves to a few
yards above my head reminding me that my tongue rests between my
teeth unprepared. I have no statement to make, no speech to
persuade them, no great oration or fiery sermon.

There’s a stillness as they
await my response. The last sentence spoken aloud,
our able hero twinges, Jenny
, suddenly shouts its message in my ear only:
the real journey begins now
.

I’ve been tongue-tied too long; the
word is my only salvation. If ever I need to speak well, it’s
now.

I scan the faces. I know
their names, their families, their jobs, their struggles and the
sacrifice they made to leave Exodia. I lower my eyes. I can’t be
haughty or arrogant. I stare at the feet of the Mourner who is
closest to me. “This is a great thing
—
our escape. Too wonderful for me,”
I say.

I quiet my soul, lift my
eyes, and focus on a mother holding a child
—
a young child, recently weaned and
snuggling into her shoulder. I point to them and struggle for the
right words, all while I sense the steady movement of this tortured
group inching forward.

“
See the child’s innocence.
I am no more guilty of causing the Culling Mandate than that baby
is.” The mother backs away, slips behind her husband. “But if you
need a sacrifice then I’m willing to die, but it won’t bring back
your children.”

Lydia gasps and her mother steps toward
the Mourners. An angry man, probably the leader of the Mourners,
rough-hands her aside and Jenny stumbles, calling out “Eugene Hoi!
Stop this!”

Both Lydia and I reach to steady her,
but Eugene pushes between us, separates me from them and from
Harmon and Mira, who are being held back by young men in their
twenties, surviving sons of the broken families. Harmon’s arms and
Mira’s are pinned to their sides. Eugene’s stringy hair hangs over
his eyes like a beaded curtain, but between the strands I see his
eyes, dark, smoldering, and violent. He spreads his lips in
something like a wild dog’s grin.

“
Eugene, stop this!” Jenny
repeats at the top of her lungs. She has every right to be on the
side of the Mourners, but she isn’t. Her words ring in my ears and
their very letters play in my mind’s eye until my gemfry gift
jumbles the letters past formations like
the top geniuses
and several others
and finally settle into a strange message:
eighteen spot us
. I try to shake the
prophetic meaning away.

I want to say “wait” and “let’s talk
this out” and I even have a few other sentences taking form, but I
hesitate. Eugene rams me and I stumble backwards, splitting apart
the few people left standing between me and the sheer
drop.

My feet slip at the edge
and my arms flail round like windmill blades which brings to mind
Kassandra, the sheep, how I worked on fixing the turbine, my two
years on the ranch
—.
And before any more of my life can stream through my head I
know I’m going to drop into the void that just minutes ago was the
death canyon of so many Blue soldiers.

Before the people finished crossing and
well before the bridge collapsed and sent the entire Blue army to
their deaths, Barrett overheard Dalton tell Lydia he no longer
wanted to be called by anything other than his original name: Bram
O’Shea. When the celebration began Barrett sneaked a look at
Lydia’s radiant face, saw her reluctantly drop Bram’s hand, and
join Mira in a jubilant dance.

Barrett started running, not the freaky
speed his special gift allowed him, but rather a purposeful jog to
circle round the hundreds of Reds who had escaped the grasp of
Exodia’s cruel tyrant. He reached the farthest point as the
ecstatic multitude suddenly hushed. For him the short exchange was
clear even at the distance he’d gone. He saw Mira and Harmon
struggle against four thugs while the rest of the people crammed
tighter together. Barrett raced back around the edge of the
throng.

He was ten feet away when a
man he knew as Mean Gene smashed into Bram. Bram tottered on the
brink. Barrett had seconds to react
—
to save his friend by grabbing his
arm or lunging for a hold on his leg
—
or to focus the speed of the last
ten feet and angle to dive at Gene and send him over the rim
too.

Adrenaline rushed power to his legs and
images to his brain. Without Bram to hold Lydia’s attention perhaps
he’d have a chance with her. He’d loved her since he was fourteen.
But Mira’s cryptic remark that Lydia would never dance with him was
tangled with the memory of Lydia rebuffing his last
advance.

He was five feet closer to a wobbling
Bram who was flinging his arms forward in an effort to shift his
weight away from the abyss. Suddenly Lydia appeared. As if she were
a raven-haired angel she leaped over Eugene and flew toward
Bram.

Barrett had no time left to react. He
would dance with the girl of his dreams even if it meant it’d be a
dance of death.

The fear of falling grips my heart just
as Lydia’s shout reaches my ears. I see her lovely dark face
explode into my vision, along with the pitiful visage of Barrett,
springing from out of nowhere.

I’m too far off balance. Neither one of
them alone could pull me back, but maybe together their feet will
find leverage and their hands will yank me from
oblivion.

It can only be an instant, a fraction
of the most hopeless of seconds, which plays before my eyes: my
brother Harmon escapes the hold the two men have on him in order to
pull Eugene back. They tumble backward, away from the cliff, as the
crowd erupts in shouts and screams. Lydia reaches for my wrist and
Barrett twists his airborne body knocking her to safety and sending
himself over the ledge with me.

We thrash and flounder in the emptiness
and drop through a couple stories worth of cliff-side brush and
stubble, bumping, rolling. There’s no time to think as Barrett
clutches at me, hugs me close and takes the landing for us
both.

We’re on an outcropping of rock, our
thousand foot descent abruptly stopped far short of a deadly
plummet. Barrett has cushioned my landing and taken the shock of
the long fall.

“
Bear?” I don’t dare move,
but his right arm still circles around me. Limp.

I can see straight up, maybe thirty or
forty feet to the bank where frightened faces peer down at us. I
scan the rock face; there are no marks, no scratches to define our
trail, no path to ascend. My scrutiny ends a foot above me where
only a dew-beaded spider web, one end split from its harness,
proclaims our helplessness. I lift my right hand to wave and
Barrett’s arm slips off my chest.

They shout at me from above, but I
can’t wave for rescue. I can’t because I’m holding Bear’s wrist,
not feeling a pulse, not sensing his life at all. My head is tucked
below his ear, cradled like that child I saw in his mother’s arms.
Tears track from my eyes as more faces appear above. I don’t need
to count to know there are eighteen. Eighteen spot us. Hundreds
more are hanging back.

Lydia crumpled to the ground when Bram
and Barrett tumbled off the cliff. Jenny draped herself over her
daughter barricading her from the rush of people, some fleeing the
edge fearful that the ground would give way, others blocking their
escape, eager to take spots along the rim.

Lydia’s breath was gone.
The shock of what happened stunned every sense. Her eyes blindly
focused on the hard scrabble earth. Her ears muted the gasps and
cries of those around her. Her mother’s hands upon her back added
little to the weight of desperation that crushed her down. The
person she felt the most connection to
—
loved with all her
heart
—
had fallen
to his death.

A Proscriptive Relationship by Jordan Lynde
Ecko Rising by Danie Ware
The Rainbow Troops by Andrea Hirata
The Girl With No Name by Diney Costeloe
The Summer of the Falcon by Jean Craighead George
What Donovan Wants (The Accidental Series, Book 4) by Tina Martin
The Confidential Casebook of Sherlock Holmes by Marvin Kaye
Fantasy Warrior by Jaylee Davis
Ruby Red by Kerstin Gier
The First Four Notes: Beethoven's Fifth and the Human Imagination by Matthew Guerrieri
Our partner