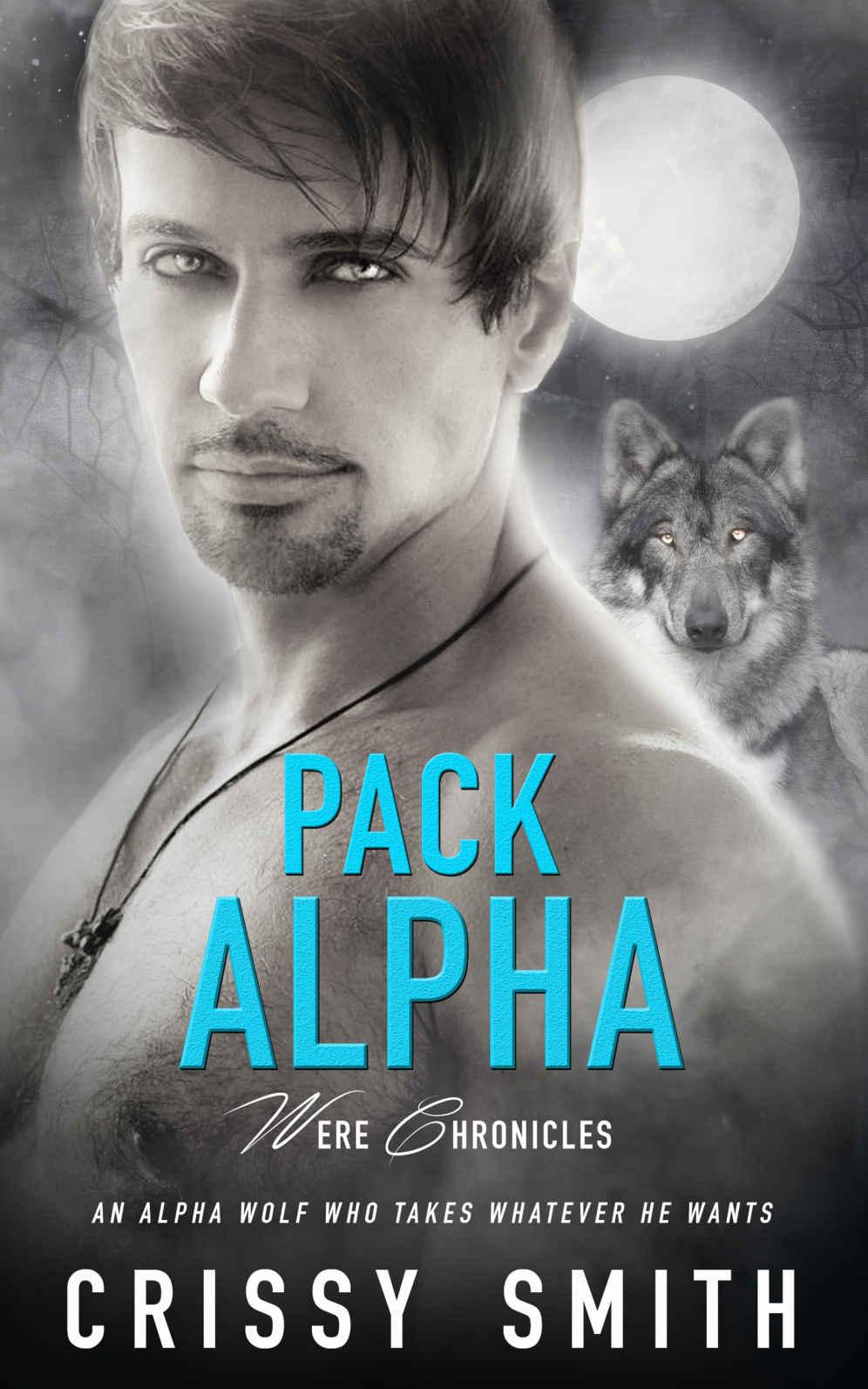 Book one in the Were Chronicles series

Marissa Boyd finds herself drawn into a world she can never be a part of, complete with an Alpha wolf who takes whatever he wants. And he wants her.

Marissa Boyd knows, as a non-shifter, she doesn’t belong in Pack territory. She braves a visit to attend her sister’s mating ceremony and meets the shifter who will change her entire life and beliefs.

Gage Wolf knows Marissa is hiding a pained past. As Alpha, he’s used to protecting his Pack. Marissa challenges his authority like no one he’s ever met before. His desire to claim her is strong and his wolf won’t be denied. He’ll have her as his mate even if he has to fight to teach her the meaning of belonging to an Alpha. Even if it is Marissa’s feelings of not being good enough for him that he must battle.

Cool wind whipped the fur around her face as she leapt over a log to land easily on her paws. She could smell the water from the creek ahead as well as the damp soil and other critters running around.

As she slowed down, her heart continued to beat frantically. Movement to her left drew her attention. A powerful male wolf stepped into view. She almost stumbled from the power that radiated from the shifter.

Instinct had her dropping down to her belly as the wolf strode toward her. She rested her chin on her front paws to show the appropriate amount of submission. She didn’t want to challenge this male—no, indeed, her body was reacting to his dominance by tightening in arousal. He lowered his head while he was still several yards away and she got the distinct impression that he was scenting her.

She rolled over onto her back and tucked her paws close to her chest, showing him that she was completely open to him. When he finally reached her he used his snout to push her paws aside and nuzzled the soft vulnerable skin of her belly. She whimpered in both obedience and need. He rewarded her with a lick across her muzzle before he gave her side a strong push, causing her to roll.

He braced himself over her back and she knew what would come next. She lifted her rear end up into the air to accept him.

Next to her, the man she’d picked up at the bar the night before was snoring softly. Damn, she’d forgotten about him.

She climbed out of her king-sized bed quietly, hoping not to disturb her sleeping partner. Hell, she wished they had gone back to his place instead of hers, then she could have slipped away without having to face him again. Instead, she was going to have to do the whole ‘Good morning, had a great time, don’t call me, I’ll call you’ thing. And with that dream still affecting her it would be hard to act normal.

The bedroom door was open so she strolled out naked and straight to the living area. At least there she had a basket of clean clothes that she hadn’t put away yet. She picked up a pair of panties then slipped them on before grabbing a T-shirt and pulling it over her head. Once she was covered she walked over to the large windows and yanked open the curtains. She had a beautiful view of the Pacific Ocean and she enjoyed seeing it when the sun was just rising over the water.

Even though she’d lived there for a few years now she wasn’t used to seeing all the openness. The Pack that she’d grown up in had been located in the middle of the woods. She’d given up the freedom of nature to surround herself with water and city people.

Marissa pressed her hand against the cool pane of glass and closed her eyes. Why did she have to dream about things that she would never have? It was impossible for her to ever have her fantasies become reality. She was alone and she should be used to that, but Marissa craved the intimate touch of someone who would accept her. Even if she was broken. She’d been on her own for so long now that she figured the feelings of loneliness would have disappeared. Instead the feeling was stronger than ever.

But she was a grown woman and didn’t have time to let her despair rise. She pushed off the window and turned to go into the kitchen. It was only a dream and she would forget about that and the male wolf that didn’t exist. At least not for her. The coffee pot was ready to go so all she had to do was press the power button. After she got some caffeine inside her she could get rid of her guest.

If I could only remember his name.

The beep from the machine let her know that her coffee was ready. She strolled back over to the counter then reached up and pulled down a mug. Marissa poured some of the dark brew into the cup before adding some sugar. She stirred it slowly as she breathed in the fragrant aroma. If there was anything that she spent too much money on it was her organic and expensive coffee—a habit she had picked up when she’d first moved into the small coastal town. She lifted the mug to her lips and blew on the liquid inside, then took a sip.

“Ah,” she murmured in happiness.

“That smells great. Can I get a cup?”

She jerked slightly, not having heard her companion wake and walk around her condo. She turned and smiled at him. Damn, he was built. He had long black hair with beautiful blue eyes. His chest, arms and back were muscular and he had a hard six-pack. Yeah, she’d picked damn well the night before. She licked her lips as he stood there in just a pair of jeans, still unbuttoned, and looking sexy as hell.

Chad, she could remember his name now. They’d met at the local bar that she liked to visit because it had rough, biker-type patrons. For a human he sure had given her one hell of a ride.

Hmm, maybe she could take him back to bed for an encore. If the dream could help with anything maybe it would get her into the right mood. Chad was nothing like the wolf in her dream. Of course, he was human, but he also couldn’t force her to submit the way that only a strong shifter male could. Still, it would be a waste to send him away while she was tingling with need. She’d make his drink and let things grow from there.

“How do you take your coffee?” she asked.

“Black is fine,” he replied against her ear as he stepped up behind her.

She shivered slightly from the huskiness of his voice. Marissa grabbed another mug then filled it up before she turned to face him.

The look in his eye was telling her he wouldn’t mind another round either. She handed him the cup, making sure to let her fingers brush his. He accepted it with his right hand but wrapped his left around her back. He pulled her close as he dipped his head.

“Me too,” she agreed. Marissa ran her hand over his naked chest. “You sure know how to show a girl a good time.”

He chuckled. “It’s easy when I’m with the right partner.”

Marissa flushed. Yeah, she had been up for anything with the full moon just a day away. Chad nuzzled her neck then gave her a quick nip. The move was so unexpected that she jumped. It was almost wolf-like. She knew he was human but that small sting was perfect. A repeat was very much needed indeed. He set his mug down on the countertop with a loud clunk before he gripped her hips, lifting her up.

As she landed on the marble top he stepped between her legs. Marissa was glad she hadn’t gotten completely dressed. She ran her hand over the muscles on his chest then bent forward and licked one of his nipples. He groaned while threading his fingers through her hair. Marissa scooted closer to the edge so she could get a better angle. While tracing her tongue from one pec to the other, she trailed her hands down his stomach toward the waistband of his jeans.

“Yeah,” he murmured and rocked his hips as she slid her hands into the denim.

He was fully erect and she wanted to get a taste.

A loud banging on her front door stopped her from dropping into position.

Chad groaned but helped her slide off the counter. She offered him a smile then patted his chest before she headed toward the door. A glance at the clock in the living room showed her that it was just after nine in the morning. Marissa had no idea who would be at her place so early on a Saturday morning. What if she wanted to sleep in? That was just rude.

When she reached the front door she looked out of the peephole to see who was there. A young man in a brown shirt and shorts stood shuffling his feet while holding an envelope. She wasn’t expecting a delivery but unlocked and opened the door anyway. Maybe the kid had the wrong address.

For the Love of a Soldier by Victoria Morgan
Sword of the Gods: Agents of Ki (Sword of the Gods Saga) by Anna Erishkigal
The Dark Frontier by Eric Ambler
The Devil's Redhead by David Corbett
The Black by MacHale, D. J.
Breadcrumbs For The Nasties (Book 1): Megan by Novak, Steven
Blood Lines by Grace Monroe
The Queen's Gambit by Walter Tevis
Remy by Katy Evans
Bones Omnibus by Mark Wheaton
Our partner