Read Panda to your Every Desire Online

Panda to your Every Desire 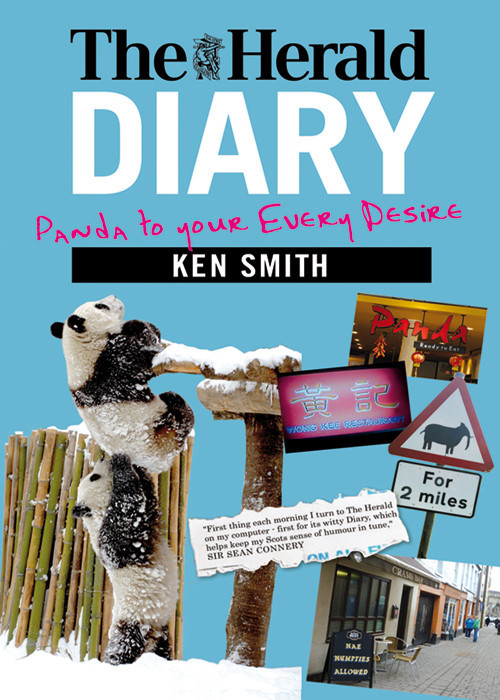 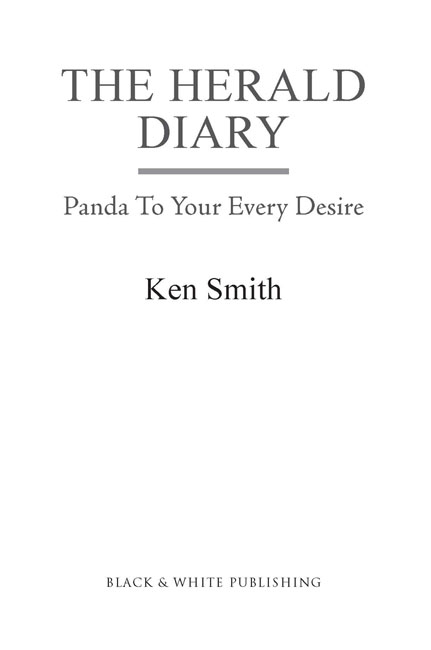 3    From Shipyards To Call Centres

Who could blame any Scot who parodied Rikki Fulton’s character, the Rev. I.M. Jolly, and went around declaiming, “Ah’ve had a helluva year”?

If they weren’t worried about the economy, petrol prices shooting up or the disappearance of sunny summer weather, they couldn’t even rely on the football to cheer them up.

So instead Scots did what they always do in times of trouble – they cracked jokes about it.

Even better, they then sent the jokes, funny stories and daft encounters to
The Herald
newspaper’s Diary column for everyone to share.

We are indebted to the readers for doing so, and in return here are the very best of the funny tales told, and amusing pictures snapped, for your enjoyment.

We suspect that even the Rev. I.M. Jolly might have smiled a little if he had been given this book.

You don’t always need haggis and whisky in front of you in order to quote Rabbie Burns. When Scots go abroad, or visitors come to Scotland, it reminds us: “O would some power the giftie gie us, to see ourselves as others see us.”

SCOTTISH hospitality and friendliness is famous all over the world, we know that, and Willie Aitken from Ottawa proves it.

Willie was visiting friends in Stornoway and went into the chip shop after the bar closed and ordered a hamburger supper.

The lady wrapped it up, then said conspiratorially: “The hamburgers aren’t very good tonight, so I’ve given you two.”

HURRICANE IRENE was one of the largest storms in years to hit the eastern seaboard of America. Reader Alastair Breckenridge contacted friends in Philadelphia to check they were okay.

His friends replied that the city had suffered its wettest August since records began.

It had been so bad, he added, there were plans to change the city’s name to Scotland.

A READER in Sydney swears that a young toper in his local bar announced: “I got attacked by a great white shark out on the surf.”

“Did you punch it on the nose,” asked an interested onlooker.

“No,” replied the swimmer, “he just attacked me for no reason.”

MIKE RITCHIE, watching the severe weather conditions on America’s Eastern seaboard, tells us: “Hurricane Irene has been downgraded to a Scottish summer.” 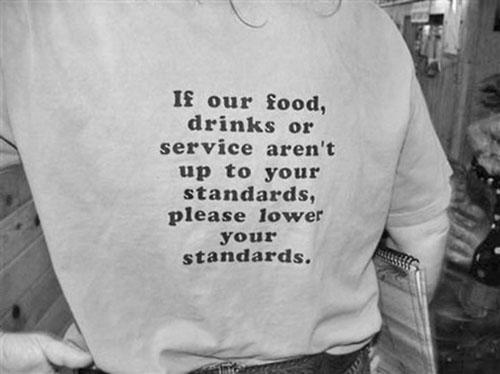 A READER in the United States was listening to the presenter on a TV show who announced: “Coming up after the break – how to save money on vacations. Don’t go away.”

SOMETIMES we like a joke because it’s just plain daft. So thank you John Daly in Houston for telling us about the two American tourists ordering horse steaks in a Glasgow restaurant.

“We don’t eat horse over here,” the waitress told them.

“So how come that guy over there just ordered mare soup?” asked one of the Yanks.

NEW YORK taxi drivers have a tough reputation. David Speedie in the city recounts: “My wife, on her first visit by car to Manhattan, got hopelessly lost. She pulled up at traffic lights, next to a taxi driver, and asked directions. Without looking at her he replied, ‘If you don’t know New York, lady, take a cab.”’

A LONDON correspondent tells us he was in his local boozer when the TV news carried the headline: “Winds of 100mph batter Scotland.”

At that a local loudmouth opined: “That won’t bother the Jocks. They love everything as long as it’s battered.”

BRUCE MACGREGOR of Scottish music group Blazin’ Fiddles was having a few libations after a gig in Perth with members of a Polish band on the bill when the Polish drummer leaned forward and said: “I like your wooden legs.”

Bruce laughed nervously, tapped his legs and said: “I think you mean hollow legs,” but the Pole insisted, “No, I like your wooden legs.”

Says Bruce: “I was a bit perplexed. Blokes don’t normally talk about my legs.

“I asked again, and he slowed down and waved his arms about. ‘I like this country – I like the woods and lakes.”’

THE EARTHQUAKE in the eastern US has naturally excited a lot of nervy Americans. As one of them tweeted afterwards: “Gosh! It’s only been like a half hour – and already I’ve finished my 15-day supply of emergency food.”

A BEARSDEN reader tells us an American girl was staying with his family over Christmas, who was taken aback by the pessimism of some Scots. When she was waiting for a train into Glasgow, a fellow traveller asked: “How are you?” and she replied: “Can’t complain.”

The chap then asked: “Why not?”

AS BARACK OBAMA’S presidency loses its glister, John McBride in Texas sees a car sticker with a picture of a smiling and waving George W. Bush with the caption: “Missing me yet?”

FRANK PIGNATELLI, retired to France, tells us crime drama
Taggart
is very popular on local TV, and is shown with French sub-titles. The problem is that the Glaswegian dialogue can sometimes be a challenge for the translators.

Two characters were coming out of a chip shop, says Frank. One of them opened his bag of chips and barked: “Where’s ma pickled onion?” The French translation on screen said simply: “Bon appétit!”

NEWS of the bad weather in Scotland reached America as a reader sends us a cutting from his local newspaper that included the letter: “I’ve just heard from a friend in Scotland. He says it has been snowing heavily for three days now. His wife has done nothing but stare through the window.

“If it doesn’t stop soon he’ll probably have to let her in.”

GARY JOHNSTON in Australia was talking to a fellow ex-pat, Billy, about how you can tell if you have been fully absorbed into Australian life. Billy went to a bookshelf and returned with a tome entitled
Blokes and Their Sheds
. “If you think this is about garden outhouses, you’re definitely an Aussie,” Billy told him.

“If, on the other hand, you assume it’s a book about hairstyles, you’re still essentially Scottish.”

AN AMERICAN visitor to the UK says when he was visiting Stratford-upon-Avon he asked a local what St George’s Day was all about.

“It’s like St Patrick’s Day,” the chap replied. “But without all the fuss.”

NEWS from abroad, and we note that Frank Buckles, the last surviving American soldier from World War One, has died at the age of 110. We mention it as we’ve always liked the answer Frank once gave when he was asked the secret of a long life. “When you think you’re dying,” Frank replied, “don’t.”

A LESMAHAGOW reader visiting friends in Texas felt a sticker she saw on a woman’s car over there could equally apply to harassed mothers over here. It read: “If a woman’s place is in the home, why am I always in this car?”

POLISH workers – they’ve been great for Scotland, although there have been misunderstandings. A reader who works in a major Scottish hotel tells us about the Polish receptionist who was on duty when an elderly American guest called reception as her husband wasn’t feeling well, and she asked for a doctor.

“American or European?” asked the receptionist. She asked for American.

Five minutes later, the Polish chap arrived at the door with an American adaptor.

A READER in Maryland, USA, tells us her dentist has a sign on the receptionist’s counter which says: “Please be nice to our dentists. They have fillings, too.”

IT’S GREAT when readers in America send us cuttings of so-called Scottish jokes from their newspapers. The latest reads: “An American businessman in Glasgow walked into a restaurant and asked the waitress what the special was. ‘Roast and rice,’ the Scottish miss replied in a heavy brogue.

“‘You certainly do roll your Rs,’ the businessman observed.

All we could think was: roast and rice? Who would ever serve that?

BBC SCOTLAND’S health correspondent Eleanor Bradford took some Ozzy friends to Oban. She warned them that the beefburgers on sale in a local chippy were not like the beefburgers they were used to in Australia. Her fears were confirmed when the Australians asked the woman in the chip shop if the beefburgers were fresh.

“Aye,” she replied. “Straight out the freezer, and we freshly fry them.” 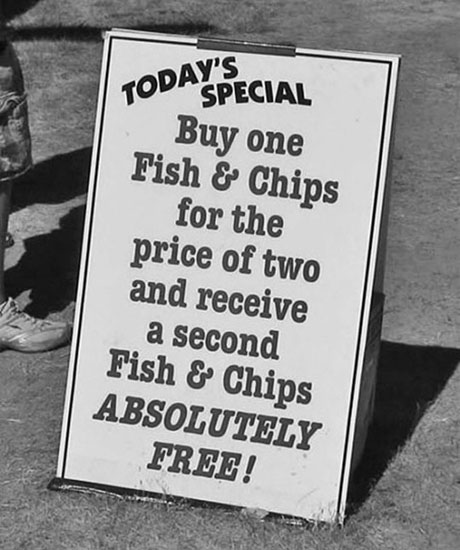 CAM HAMILTON, whose late father had a grocer’s shop in Lanark near the River Clyde, tells us his dad, on more than one occasion, had American visitors, fans of the late Harry Lauder it seems, who came in to the shop to ask: “Where can we find Gloamin?”

A PERTHSHIRE reader back from a holiday in America saw an auld fella at a shopping mall get into a car which had a sticker on the back window stating: “I’m retired. I was tired yesterday. I’m tired again today.”

AUSTRALIA was having a tough time of it with fires and floods, and one of the most heartbreaking stories from the floods was the
Morning Bulletin
newspaper in Queensland reporting that “30,000 pigs were floating down the Dawson River”.

The newspaper put an apology in the following day which read: “What piggery owner Sid Everingham said was thirty sows and pigs.”

TALKING of Australia, Bill Arnott tells us that the Queensland flooding and cyclone damage means banana prices rocketing locally due to the damage to crops. He tells us that after the last cyclone in the area, a shop in the town of Nambour put a notice in its window stating, “No bananas kept on these premises overnight.”

In the Mouth of the Whale by Paul McAuley
Grace Under Pressure by Hyzy, Julie
Horrible Harry and the Dragon War by Suzy Kline
UseMe by Ann Cory
The Postman Always Rings Twice by James M. Cain
Angel in Chains by Cynthia Eden
Kiss of Steel by Bec McMaster
The Great Betrayal by Ernle Bradford
Charming You (Thirsty Hearts Book 1) by Kris Jayne
Her Protector's Pleasure by Callaway, Grace
Our partner