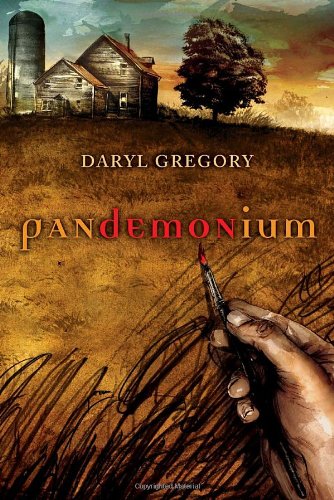 To Kath, who knew before I did

The woman next to me said, It’s the Kamikaze. Someone else said, No, it’s the Painter—the Painter or the Fat Boy.
The river of people leaving the gates had log-jammed against a line of cops, and rumor rippled back through the crowd. A demon had possessed a man, and O’Hare security had sealed off the concourse between the gates and baggage claim. Reactions varied from exasperation to excitement. It was another travel delay, but at least it was an
interesting
delay.
I could see nothing beyond the end of the crowd but the cops’ blue shoulders and the cavernous space of the United terminal. We couldn’t go back: we’d just come through security, and more travelers were filling in behind us. There was nothing to do but wait for the demon to finish its business.
I dropped my blue nylon duffel bag between my feet and sat astride it, surrounded by a forest of legs and luggage. The scraping sensation in my head, quiet since morning, started up again. I stared at my shoes and tried to take clarifying breaths. My last doctor was big on clarifying breaths—that, and heavy meds.
I was tired. I’d been traveling all day, flying standby and catching one flight for every three, portaging the duffel through three airports, three sets of security shakedowns. At least I wasn’t Japanese. Those poor bastards were practically strip-searched at every gate.
Someone backed into me, stumbled, and moved aside. I looked up, and the crowd shifted backward like spooked cattle. A path opened through the bodies, and suddenly I was alone in the middle of an aisle with the possessed man running toward me.
He was naked to the waist, his skinny chest and arms coated with gray dust, eyes wide and happy. He grinned, his mouth making words I couldn’t hear. I got out of his way, leaving my bag in the middle of the floor.
He veered suddenly toward a popcorn vendor cart. Parents yanked children out of his way; people scattered. The crowd’s mood had lurched from morbid curiosity to outright fear. A demon five hundred yards away was a lot different than one in your face.
He grabbed the cart by its handles and tipped it easily with the cartoon strength of the possessed. Someone screamed. The glass case shattered. Yellow popcorn blossomed into the air, and a metal pan bounced off the tile and rolled away like a hubcap.
The possessed man cackled and began to scoop up the popcorn, ignoring the shards of glass. He rose into a squat, arms full, and winked at me conspiratorially. His hands were bloody. He staggered back the way he’d come, hunched over his load. The cop let him pass without making a move.
What else could he do? He couldn’t shoot the guy. It wasn’t his fault, and if they obstructed him the demon might get pissed, jump to someone else (like a cop with a gun), and start hurting people. Nothing to do but keep the gawkers back and wait for it to burn itself out.
I picked up my bag and walked forward—plenty of room at the front of the line now—until I’d reached the temporary barrier, a ribbon of nylon strung between plastic posts. There was no one between me and the demon but a line of cops.
The United terminal was an art deco cathedral of steel and glass, shining ribs arcing under blue glass. I’d always liked it. The demon, trailing puffs of popcorn, shuffled to the middle of the concourse, stopped between the Starbucks and the shrine to the Kamikaze, and opened his arms. The popcorn spread over the marble with a susurrant
huff.
He surveyed the mess for a moment, and then began to dance. He crushed the popcorn beneath his glossy black shoes. He paused, then danced again. When he was satisfied he dropped to hands and knees and began pushing the yellow powder into the borders of his sand painting, his collage, his sculpture—whatever the hell it was.
What it was, though, was a farm: a quaint white farmhouse, a red silo and barn, a line of trees, wide open fields. The farmhouse was powdered detergent or sugar or salt; the silo bits of red plastic and glass that could have been plucked from smashed exit signs; the trees cunningly arranged candy wrappers and strips of Styrofoam from coffee cups and junk food packages. The crumbled popcorn became the edge of a wheat field. The picture was simultaneously naturalistic and hazily distorted, a landscape seen through waves of heat.
The demon began to add details. I sat down on my duffel and watched him work. He fiddled with the shards of red glass to suggest the warp of barn wood; gently blew the white powder into the ghosts of gutters and window frames; scraped his shoe heel against the marble to create a smudge above the house that could have been a cloud or a large bird. The longer he worked, the more familiar the scene became. I’d never seen the place before—at least, I didn’t remember ever seeing a farm like this—but the picture was so relentlessly quaint, so Norman Rockwell, that maybe it was the
idea
of the farm that I recognized. The Jungians thought demons were archetypes from the collective unconscious. Perhaps the subject matter of archetypal artists was archetypes.
And then he abruptly stood and walked away, not even glancing back at the finished picture. The man took maybe a dozen steps, and then collapsed. No one moved for perhaps a minute.
Finally a cop edged forward, his hand on his nightstick, and asked the man questions I couldn’t catch. The man looked up, frightened. The cop helped him to his feet, and the man looked at his cut hands, then around at the crowds. The cop put an arm around his shoulder and led him away.