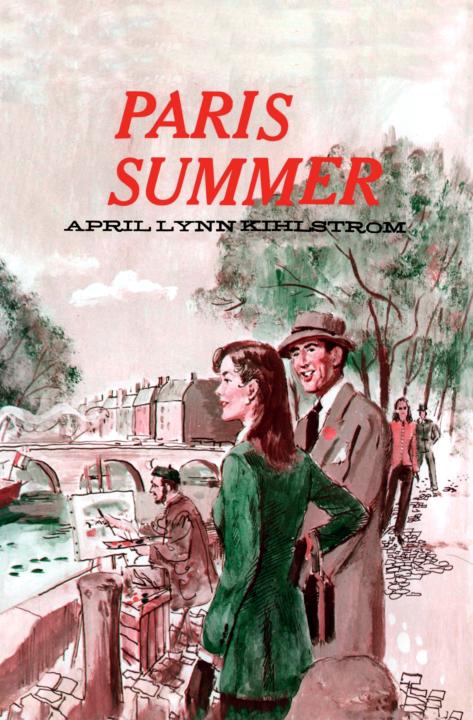 Paris: culture, cafes, romance. Odd that one word
can conjure so many images. At the moment, however,
Janine was only aware of loud voices, jostling elbows,
the roar of jets, and a terrible headache. Now, if I can
just find my luggage-intact! Janine thought unhappily. Then there should be a bus to the center of town,
and I can take the Metro to Rena’s apartment. She’d
better have a good reason for not meeting me!

After several minutes, Janine’s suitcase appeared on
the moving belt. Retrieving it from under a heavy
backpack, she stumbled toward one of the exits.

Abruptly Janine realized he meant her. She turned
quickly and found herself looking up at a man who was
regarding her anxiously. Automatically Janine noted
that his hair needed combing. “Oui?” she said.

He smiled. Or rather his eyes smiled; his mouth was
set in a frown.

“What is it?” Janine asked in French.

“Didn’t you hear your name announced? Rena sent
me to meet you. Is this all your baggage?”

Pleased that she had understood him the first time,
Janine smiled and answered in her best college French.
“No, I’m a little tired. Yes, this is all.” She hesitated for
a moment. Should she use to as he had or vows? Vous,
she decided firmly. “Vous etes…?”

Without waiting for an answer, M.Renaud picked
up Janine’s suitcase and strode toward the door. Janine
found herself half running to catch up. Outside, M.
Renaud was holding open the door of a Citroen fitted
with what looked like leopard-skin seat covers. Very
French! Janine thought, glancing sharply at him.

“Don’t worry, they do not bite,” M.Renaud said
with a slight leer. “I am the only thing dangerous in this
car.

As they started toward town, the awe of being in
France began to take hold of Janine and her headache
slipped away. How long had it been, two years? three?
that she had been planning such a trip? Rena’s letters
had not diminished the fascination of legendary Paris;
rather they had whetted Janine’s imagination. Turning
eagerly to M.Renaud, Janine asked, “Will we pass
Notre Dame or the Eiffel Tower?”

He replied frostily, “I am not a tour guide. We are
taking the shortest route to Rena’s apartment.
Frankly, I don’t know or care what we pass!”

At least that’s what Janine thought he said. M.
Renaud was speaking French so rapidly that she wasn’t
sure. Biting her lower lip, Janine resolved to be silent
for the rest of the drive. Even M.Renaud’s rudeness,
however, could not dampen her rising happiness at
being in Paris. Frenchmen, she thought wryly, are not
nearly as romantic as people think. Nor as courteous.

From time to time, M.Renaud grudgingly would
point out a building with a word or two of-to
Janine-unintelligible explanation. Before Janine was
ready, the car was stopping on a narrow street. Leaning
across Janine, M.Renaud opened the door on her side.
“Here we are. First stairway, fifth floor, on the right.
Rena knows I am too busy to come up.”

Wanderers by Kim, Susan
Igniting the Wild Sparks by Alexander, Ren
Tannhauser 02: The Twelve Children of Paris by Tim Willocks
Sammy Keyes and the Cold Hard Cash by Wendelin Van Draanen
Lost scriptures: books that did not make it into the New Testament by [edited by] Bart D. Ehrman
India's Summer by Thérèse
Incubus Dreams by Laurell K. Hamilton
Available Dark: A Crime Novel (Cass Neary) by Hand, Elizabeth
Last Measure of Devotion (TCOTU, Book 5) (This Corner of the Universe) by Britt Ringel
063 Mixed Signals by Carolyn Keene
Our partner