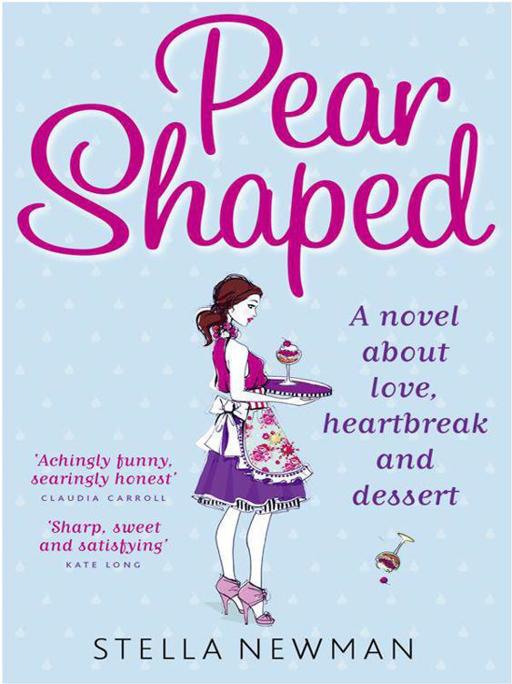 To my parents, and in loving memory of
my grandparents.

Oh, the tiger will love you. There is no sincerer love than the love of food.

If I can’t have too many truffles, I’ll do without truffles.

Food in the book

A word on brownies…

A few of my favourite things…

1.
noun
– a rich frozen dessert, made with eggs, cream and sugar

Two girls walk into a bar. There is no punchline.

I’m the girl on the left in the wildly inappropriate black and white spotty summer dress. It is the snowiest February in thirty-eight years but I flew back from a month in Buenos Aires three days ago and this tan ain’t going to waste.

A month in Buenos Aires: sounds glamorous? Ok: a month in a £6 a night hostel in the Boedo barrio – think Kilburn with 98% humidity. No air con, no overhead lighting, shared showers. I’m thirty-three. I earn okay money. I don’t like sharing showers, not least with 18-year-old Austrians proclaiming
Wiener Blut
the greatest Falco album ever released. Wieners aside, Laura and I have the time of our lives.

Laura is the girl on the right in the bar. Best friend, tough crowd, northerner. She’s wearing a polo neck and a woolly hat. Together we look ridiculous; we don’t care.

It is one of those evenings. Whether it’s the outfits, the tans or the sociability that a snowy Friday night in London
brings, we end up being the epicentre of it all. One guy, Rob, has been trying to impress me for the last twenty minutes. He’s too pretty for my taste and he’s spouting off about knowing Martin Scorsese’s casting director.

‘I can see you playing a gangster’s moll in that dress,’ he says. ‘Those big green eyes. Real curves.’

I laugh. I’m a size 10, with tits and an arse, and the girl he’s abandoned at the bar talking to his mate is one of those girls you can count the vertebrae of through her silk shirt.

‘Are your eyes real?’ he says.

‘No, they’re mint imperials, I paint the irises on every morning to match my shoes,’ I say.

‘Your girlfriend’s getting pissed off,’ says Laura.

‘She’s with my mate,’ says Rob, fiddling with his watch. ‘Actually, do you girls want a drink? Two more margaritas?’ He heads to the bar. Before he’s even back there, his mate, who is less pretty and far more my type, heads towards us.

I say nothing. I look at Rob’s friend and a rare but familiar feeling grabs me: something big is about to happen.

‘Why are you talking to Rob?’ he says to me, grinning. ‘You don’t fancy him.’

He looks at me for a heartbeat. ‘Yeah.’

‘Well, then you talk to me instead. What’s your name?’

‘Yeah, it’s about a man who throttles his over-attentive wife to death.’ He laughs.

So I did. I talked to him, danced a tango round the bar with him, sank three margaritas with him and at the end of the night gave him my number.

He calls when he says he will – the next day. Why do I feel so grateful for this? Because the world of dating has deigned this sort of behaviour too keen. ‘I want to see you again,’ he says.

‘But I’m going away for a fortnight tomorrow.’

‘Where are you going?’

‘What do you actually do?’ I’d imagined he was a high-end builder or something to do with running a warehouse.
He’s very masculine, hefty, a bit rough round the edges, and his shirt last night didn’t quite fit.

‘Are you an international clown?’

‘Everybody needs socks,’ I say.

‘At least two pairs,’ he says. ‘I’m back in a fortnight, I’d like to take you for dinner.’

‘You’re not one of those girls who orders salad and just pushes it round the plate? You’re pretty skinny.’

‘You’ve got the wrong number.’ I have slender arms and a small waist. You can fool most of the people most of the time with this combo.

‘Good. I know the perfect place. I’ll call you in two weeks.’

I work in a twelve-storey shiny building in Soho. Up until six months ago, I had one of the greatest jobs in the world and one of the greatest bosses. I am a Pudding Developer for Fletchers, one of the biggest supermarkets in the country. I worked for a genius called Maggie Bainbridge. She never compromised on quality and had bigger balls than any of the men here.

Six months ago she quit after management fired a bunch of our top talent and brought in a grunt of accountants, intent on putting the bottom line above everything else. Even our loo roll has been downgraded to that tracing paper crap from the 80s that you have to fish out of a cardboard slit.

Maggie’s started up a one-woman brownie business, ‘Happy Tuesday’. Even though we speak often, I miss her, and daydream about running off to work with her again.

Devron used to work for a supermarket that was chewed up and spat out by a large American supermarket. He was regional manager for London South East, which is a Big Deal in Retail. Apparently he was very good at driving up and down motorways in his BMW.

His sole qualification for being head of my department seems to be that he is fat, ergo he ‘knows food’. Devron would be happy eating every meal from a service station on the M4. He thinks he’s an alpha male, he’s actually an aggressive little gamma.

The first thing Devron did when he joined was to make us all switch desks. Wanting to make his mark, and attempting to convey his profound creativity he decided to arrange us alphabetically. I used to sit with ‘Hot Puddings’, ‘Family Treats’ and ‘Patisserie’. Makes sense – we share the same buyers, technical advisers and packaging team. We liaise constantly about pastries, sugar prices, trends in the Treat market – all elements that are pudding specific.

But now, because I do Cold Desserts, I sit between Lisa, who does ‘Cocina’ – our fake-a Mexicana range of variety nachos, and Eddie: Curry. Devron says ‘we can learn a lot from talking to our colleagues’. True. I have learnt that Lisa, Eddie and I all agree: Devron is a nob.

The only thing more moronic than splitting us up from the people we need constant contact with, is Devron’s introduction of ‘cross-discipline platform solutions’. He has dumped a marketing wang on our bank of desks: Ton of Fun Tom.

Tom always wants to show me some great viral on YouTube featuring a gorilla or a dancing mouse. Tom’s knowledge of marketing is like my knowledge of Chechen history: he knows three random facts and feels guilty about not knowing more. However, I do not try to bullshit my livelihood as a Chechen historian.

Laura has come for lunch at the Fletchers’ canteen en route to do a voice-over for a car insurance website who want her husky Yorkshire accent to add ‘honest northern values’ to their shonky brand. Laura only has to do two voice-over sessions a month to pay her mortgage, and spends the rest of her time helping her boyfriend Dave run his eBay business selling vintage magazines.

This week’s canteen theme is ‘Pre-Valentine’s Value’ and we have the choice of heart-shaped pork bites or asparagus pasties. Sounds better than the falafel Eddie ordered last month, within which lurked a dog’s tooth.

‘D’you think?’ If he was that keen, he wouldn’t wait two weeks to call me.

‘He wouldn’t let go of you the other night. You were dancing for ages.’

I love dancing. My ex, Nick, an introvert, danced with me once in five years: quarter-heartedly, for thirty-eight seconds, at his best friend’s wedding, and only after I’d threatened to embarrass him by dancing on my own if he didn’t.

‘She’s stood there while he chats you up?’ I nod. ‘You’re going to have some fun double dating …’ says Laura.

‘Early days, love. He might meet some sock model in China and never call again.’

My mother phones from California. She lives in an apartment in Newport Beach, OC heartland, with her second husband Lenny, a retired orthodontist and professional doormat.

‘Have you spoken to your brother?’ she asks, saving the pleasantries for another time.

‘That’s good news, isn’t it?’ It means you won’t harangue me to have children for at least another two years.

A heavy silence on the other end.

‘Mum, she’s not that bad.’ Shellii’s so much worse than ‘that bad’, but I never agree with my mother on point of principle.

‘Good, well eat some. Your grandmother said you’re looking very thin.’ My mother speaks to her ex-mother-in-law twice a year and it seems their sole remaining common ground is my weight.

I am currently slim and mostly toned but by no means ‘thin’. I will never be ‘thin’ – the Kleins are big boned. But since I split up with Nick last summer, I have lost a stone and a half through exercise and taking proper care of myself. For the first time since I was twelve, I’m almost happy with my body, save for a few inches around my bottom.

My mother takes my weight loss as a personal slight. A rejection of body fat is a direct rejection of what unites our family and everything she stands for. Food equals love, too much food equals Jewish love. At weddings, my genetically freakish thin cousin is the subject of whispered snipes about anorexia and suspect parentage. My mother feeds Lenny three large meals and half a cake every day. She will feed that man to an early grave and then overfeed everyone at the shiva (think full on Irish wake, but with egg-mayo sandwiches instead of whiskies).

‘Lenny’s just walked in, I’ve got to start lunch.’

‘Clown school’s out for summer?’

‘You should see what I can do with three chopsticks and a scorpion.’

‘Sounds painful. Anyway, how can I help you?’

‘Tell me when you’re free for some spaghetti.’

My favourite. ‘A week on Wednesday.’

‘Too far away. I want to see you before then.’

Then you should have called me before now. ‘Sorry.’

‘Seriously, what are you doing between now and then?’

‘All sorts. Wednesday week, then?’

‘Okay. I’ll call you nearer the time with a plan. Got to go, they’re calling my flight.’

Is an average brownie better than none at all?

This is not the same as asking if a taste of honey is worse than none at all. When Smokey Robinson sang that, we can assume the ‘honey’ in question was just fine.

No, this question goes to the heart of what separates people like my old boss Maggie Bainbridge from most people on the planet who simply like cake.

When I went for the interview at Fletchers two years ago, I received an email from Maggie a week in advance:

1) A cake you’ve baked from a recipe book

2) A supermarket pudding you rate highly

Joker One by Donovan Campbell
Almost Demon (The Sigil Cycle) by Salem, AJ
Fair Game by Malek, Doreen Owens
Mine at Last by Celeste O. Norfleet
Billionaire Games by Maddox, Sylvia
The Ships of Earth: Homecoming: Volume 3 by Orson Scott Card
No Show of Remorse by David J. Walker
Tea and Sympathy by Robert Anderson
Operation One Night Stand by Christine Hughes
French Lessons: A Memoir by Alice Kaplan
Our partner