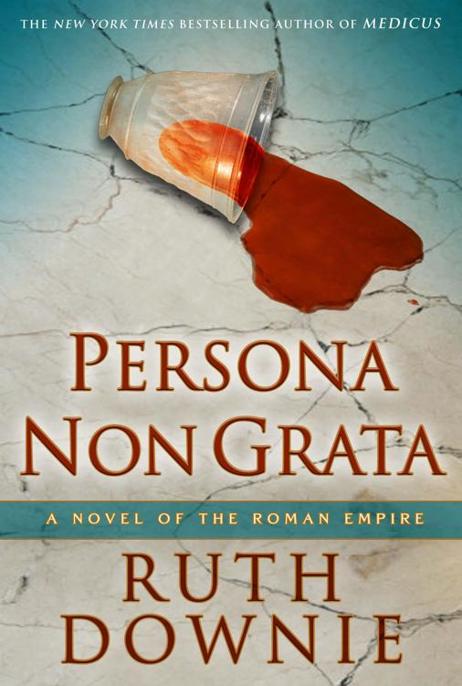 A Novel of the Roman Empire

All rights reserved. No part of this book may be used or reproduced in any manner whatsoever without written permission from the publisher except in the case of brief quotations embodied in critical articles or reviews. For information address Bloomsbury USA, 175 Fifth Avenue, New York, NY 10010.

All papers used by Bloomsbury USA are natural, recyclable products made from wood grown in well-managed forests. The manufacturing processes conform to the environmental regulations of the country of origin.

Printed in the United States of America by Quebecor World Fairfield

To the excavators of Whitehall Roman Villa

Do not heap up upon poverty, which has many attendant evils, the perplexities which arise from borrowing and owing.

The love of money is the root of all evils.

Flora, his half sisters

Claudia, his former wife, daughter of Probus (see “thrown out by”)

A security guard whose name he cannot remember

Gabinius Fuscus, a politician and cousin of a senator

Little Gaius— his nephews and nieces

Brother Solemnis, a follower of Christos

Severus, the agent in charge of the senator’s estate (see “in debt to”)

Gnostus, an old colleague with a new name

Probus (see “thrown out by”)

The senator, a character frequently mentioned but never appearing

Argued with, slept with, and abandoned (again) by

Tilla, otherwise known as Darlughdacha of the Corionotatae among the Brigantes 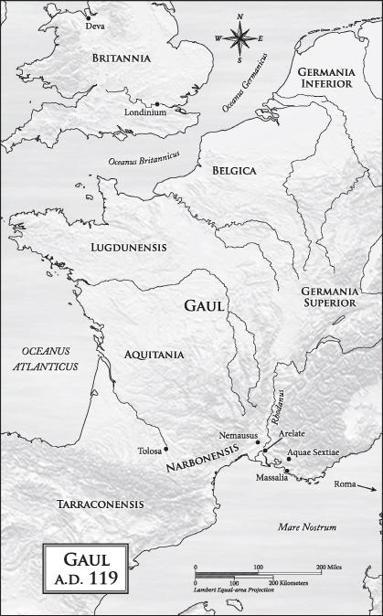 A NOTE ON THE AUTHOR

J
USTINUS WAS LYING in the stinking dark of the ship’s hold, bruised and beaten, feeling every breath twist hot knives in his chest.

The light that trickled in through the worrying gaps in the hull showed the angle of the ladder above him. Beyond it, thin bright lines betrayed the position of the hatch. He remembered the slam, and the rattle of the bolts. Now he heard the sharp yell of a reprimand over the thumps and footfalls up on the deck of the
Pride of the South
, a ship that could hardly have been less appropriately named.

What ever they were up to, it seemed he didn’t need to die for it. If they planned to kill him, they could simply have thrown him overboard. Perhaps they would maroon him on a remote island somewhere while they sailed off to enjoy spending his master’s money. He would eat berries, spear fish, and wait to be rescued. Sooner or later he would return home, thinner and browner and with a well-rehearsed apology to his master.

He forced himself into a sitting position just as the ship heeled to starboard. Cold bilge that should not have been near the cargo sloshed over his legs. Beneath him, he felt the stacked amphorae slide out of position and begin to tip and roll with the movement of the ship. Dark shapes swarmed out from among them and ran squealing along the sides of the hold.

“Hey!” he shouted, grasping at the ladder to steady himself and wincing at the pain in his chest. “Captain!”

“Copreus!” He banged on the ladder with his fist before he shouted the words that should bring the crew running. “The cargo’s shifting!”

There was a muffled shout from above, then something thudding against the side of the ship, scurrying feet, and the bark of orders. Between the other sounds, he was almost certain he could hear waves breaking on a shore near enough to swim to.

Struggling over the rolling necks of the amphorae, he pressed his face against a gap in the planking of the hull. Outside, he could see nothing but brilliant blue. He crawled back and smashed two of the loose amphorae against each other. Nothing happened. He heaved one up—thank God, for some reason this one was empty and relatively light—and swung it against the other. The heavy pottery cracked. Praying he could make a gap big enough to escape from before the sea started pouring in, he began using a broken handle to batter ineffectually at the worm-eaten hull.

“Let me out!” When he stopped to catch his breath he heard footsteps retreating across the deck. There was a series of small bumps against the hull before the shout of an order and the irregular splash of rowers getting into rhythm. After that there was nothing but the creaking of wood and the slop of water.

Moments later, he smelled the burning.

For a moment he could make no sense of it. Then, ignoring the pain in his chest, he took a deep breath and shouted through the gap, “You bastards! Get me out!”

Only the sound of water. The scuffle of a rat.

Still no reply. The
Pride
lurched violently, rolling him up the inside of the hull and drenching him with more cold water as the amphorae crashed and tumbled around him.

Smoke was seeping down into the hold, forming ghostly fingers in the thin shafts of light. The water was rising. The
Pride
was listing badly now, as if she was settling down on her side to sleep.

“Help me!” he screamed, the pain stabbing his chest with every movement as he struggled to get upright. He cried out in panic as he felt himself slip down toward the water. Seconds later he came to rest against a fallen amphora. An expanse of long pale cylinders was shifting about in front of him.

He realized suddenly that every one of them was empty. That was why they were all bobbing about on the surface of the bilge. The cargo he had authorized, and seen loaded, had vanished—probably while Copreus had been buying him drinks back in Are late the night before they sailed.

One of the amphorae gurgled and sank out of sight. The others rolled in and closed over the gap. Justinus shut his eyes. He prayed for strength. Then he edged along the ladder, which was now lying sideways, and aimed a kick at the hatch. Nothing happened.

A rat swam past him, scrabbled to get a grip, and finally managed to hook a paw over a handle and pull its dripping body out of the water.

Justinus closed his eyes again. “You can forgive them if you like,” he growled to his god. “But they don’t deserve it.”

He said a prayer for his sister and his many nephews and nieces in case he did not see them again in this life. Then he began to give a last account of his sins and stupidities, all the time kicking at the locked hatch, because anything was better than listening to the creaking and splintering of old wood and the crash as something else gave way out there. Anything was better than noticing the way the cold was creeping up around him, and seeing the fingers of light in the smoky air being extinguished one by one by the rising flood, and coughing, and knowing that, drowning or burning, the end would be the same.

He was still praying and kicking the hatch when the
Pride of the South
vanished below the surface of the sunlit water, its passing marked only by a thin drift of smoke and a swell that was barely noticed by the men hastening away in a distant rowboat.

Kennedy's Last Days: The Assassination That Defined a Generation by O'Reilly, Bill
Holly's Jolly Christmas by Nancy Krulik
Alpha 1472 by Eddie Hastings
A Sense of the Enemy: The High Stakes History of Reading Your Rival's Mind by Zachary Shore
The Incredible Melting Man by Phil Smith
Farther Away: Essays by Jonathan Franzen
Behind the Altar: Behind the Love Trilogy by P.C. Zick
The Perfect Kill by Robert B. Baer
4-Ever Theirs: Four to Score, Book 1 by Jayne Rylon
Sloane Sisters by Anna Carey
Our partner