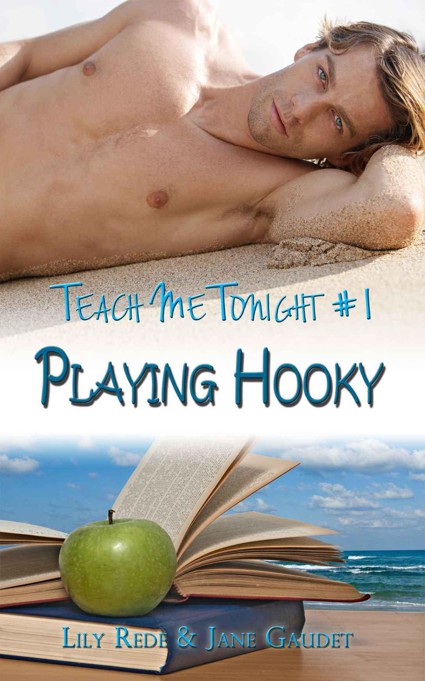 WARNING: This work
contains explicit depictions of couples engaged in consensual sex and sexual
situations. If you’re under 18, read something else!

Pour On the Heat

THE
WHEELS TOUCHED DOWN in paradise and Molly Callahan felt free for the first time
in months. As they taxied to the small island airport, she caught a glimpse of lush
tropical vegetation and beyond that, the crystal blue waters of the South
Pacific.

And
two weeks of those nine will be spent in this heaven
.

It
wasn’t that Molly didn’t love being a middle-school science teacher. Every
year, her sixth and seventh graders astounded her with their energy, their
curiosity, their huge potential – the world was in front of them, and though
she’d only been teaching for a few years, it was such a kick to see some of her
former students going on to be high school science stars.

I
must be doing something right
,
she thought as she re-packed her carry-on luggage, making sure she hadn’t left
anything behind on the fifteen-hour flight.

Too
excited to feel the jet lag that was sure to knock her off her feet in a couple
of hours, Molly stepped off the plane with the other passengers and crossed to
the little airport main building to go through Immigration and Customs. The air
was muggy and sweet, and within moments, her brown hair was sticking to the
back of her neck. But Molly didn’t care, thrilled when the beautiful copper-skinned
woman who stamped her passport offered her a smile and a warm, “Welcome to the
island.”

It
wasn’t hard to find the resort escort in Baggage Claim waving a sign with her
name on it. He was a compact, muscular young man, who cheerfully slung her bags
over his shoulder and led her to a jeep waiting outside.

“The
boat is waiting to take you out to the island.”

As
they drove the winding road to the marina, Molly took in her tropical surroundings
with satisfaction – this trip may have cost her a good chunk of her savings,
but it was
totally
worth it. Two whole weeks of sun, sand, and maybe a
vacation fling if she hit it off with a hot cabana boy. No students, no
parents, no
family.
Molly felt a slight twinge of guilt, knowing she’d
have to face the wrath of the Callahan clan when she got home, but quickly
dismissed it.

I’m
an adult. I don’t have to do what my parents tell me to do.

Defiance
was easier from a few thousand miles away. If she’d been home, Molly knew she’d
have been bullied into attending the huge annual family reunion and spent two
weeks babysitting young nieces, nephews, and cousins and getting harassed by
her mother for not dutifully providing her with grandchildren like her six
other siblings. It was tough being the only single one.

For
once, Molly just wanted some time to herself. She had voiced that shocking
notion over Friday-night mojitos with her sister-in-law Bree, who had
understood immediately.

“You
need a vacation, hon. Something on the other side of the planet where you can
lie on a beach…”

“And
meet some smokin’ island guy and get laid…”

Her
petite, blonde, cherub of a sister-in-law just laughed.

“Oh
come on, Molly. You never bring guys home to meet the folks. According to my
spies in the PTA, you never date. You work too hard…”

“And
you’ve resisted all my attempts to hook you up with my brother.”

Molly
had squirmed uncomfortably at that. Bree was fixated on the idea of setting her
up with Jack Roman, her anthropologist brother, on the grounds that
Hey,
you’re both scientists
was a good foundation for a relationship. There were
so
many things wrong with that.

It
wasn’t just that the man was a genius, she thought resentfully, but he was
gorgeous in a way that made good girls think about naughty things before their
minds completely blanked, making them look like nitwits, and
famous
thanks to a series of successful books about lost civilizations that were
irritatingly good. She’d never admit that she’d greedily gobbled them up,
seduced by the witty, smooth prose that brought ancient cultures alive with a
touch of wry humor. Underneath his serious, seemingly humorless mien was a
darkly funny man in touch with the core of what made humans
oh so
human.

Molly
wished the ground would open up and swallow her every time their paths crossed.
She was smart and she loved her job, but she wouldn’t be winning awards anytime
soon. The mirror told her she was pretty-ish, with reddish-brown hair, a few
freckles, and plain blue eyes. She wasn’t voluptuous, but she wasn’t a stick
either. In short, to everyone other than the sixth graders who looked at her
with adoration when she performed a particularly flashy chemistry experiment in
class, she was average.

There’s
nothing wrong with being normal.

Why
Bree insisted on trying to pair her up with a man completely out of her league
was beyond her. It wasn’t as though he was
interested
. He always nodded
politely and made forgettable small talk when Bree dragged them together at
every extended family BBQ, birthday party, and major holiday, but that was
it.
She could
feel
him looking down on her with those sharp cobalt eyes, and
Molly Callahan didn’t need someone like that. She had enough on her plate
without having to think about seducing a man who had no interest in being
seduced.

Not
that it wouldn’t be fun to try
,
she thought, arousal heating her as it did whenever she imagined Jack Roman’s
big, muscular form moving smoothly against her, inside her.

She
shook her head and shut down that line of thinking as the marina came into
view, along with the yacht that would ferry them out to the island.

I’ll
have to thank Bree
,
she noted breathlessly at the sight of turquoise waters stretching out as far
as the eye could see.

Once
Molly had decided to skip out on this year’s reunion and actually take a
vacation, Bree had made it her mission to find the perfect private island
resort, even surprising her with an upgrade to business class to make the
flight more bearable. Halfway around the world, it was hard to think about how
upset her parents would be that she was playing hooky. It’s not as if they
would ever find out. Patrick and Fiona Callahan thought she was at the school’s
annual faculty and staff retreat, and that’s how it would stay, thank you very
much. They never needed to know that the retreat was optional.

And
Molly could avoid Jack Roman for a few more weeks.

She
stepped on the yacht and a steward immediately came forward to welcome her and
hand her a glass of champagne. Molly looked around, noting a number of white-clad
staff.

“The
resort doesn’t officially open for two weeks, but we’re allowing a few guests
to try out the facilities to allow us to perform a test run.”

“So
I’ve got the place to myself?”

Molly
nearly squirmed in delight at the thought.

“Almost,”
admitted the steward, “There are a total of five suites booked for the next
week, and then more guests will arrive.”

He
nodded to the stern.

“Perhaps
you’d like to join the others and get acquainted? The island is small, and you
may want to socialize during your stay. We’ll be departing momentarily.”

Molly
nodded her thanks and sipped her champagne, trailing fingers along the railing
as she strolled the length of the yacht, the tension of the last few months
slowly unraveling.

The
guests were easy to spot, and Molly sized them up, only half-curious – a cute
pair of honeymooners who seemed more interested in each other than in their
stunning surroundings, a middle-aged man in a flowered shirt, carrying a camera
and a bird book, and –

All
the air left Molly’s lungs in a
whoosh.

He
was standing with his back to her, but the glint of sun off golden hair, the
leashed strength and fluid muscle that made her think of a big cat, and that
tight, perfect ass she’d wanted to squeeze for months –

JACK
ROMAN COULDN’T SHAKE the bad mood that had gripped him for weeks now. He knew
that Bree was furious with him for missing the Callahan family reunion, and
he’d only made it worse by pointing out they were
her
family by
marriage, not his. Still, he hated letting her down. While she’d married into a
huge, boisterous, loving group of people who were in each other’s lives on a
daily basis, Jack only had her. For all of the fans of his books, his
colleagues, and the dozen people that kept his public life running smoothly,
there weren’t many he counted as true friends. Bree obviously wanted the
Callahans to fill that void, but Jack had trouble letting people in, and it
showed. He’d jumped at the chance to skip the reunion with a trip to the other
side of the world.

And
so, because Bree was pissed at him, the three-week research trip that was
supposed to be his next grand adventure felt more like a tedious chore.

The
material was fascinating – an ancient island tribe the world had never heard
of, the Luveku Ika, who worshipped a half-human, half-fish deity. Bree had been
delighted when he told her about the “mermaid people,” and wanted every detail.
Though he wasn’t thrilled that the other half of the island was being taken up
by the new, swanky resort, it was convenient for his purposes. Showing up for a
few weeks of preliminary observations before they opened would give him a
chance to evaluate and plan a more thorough investigation.

The
research would keep him busy.

And
keep him from thinking about a certain sexy schoolteacher.

Staring
out at the water as the yacht began to move, Jack felt a familiar heat as Molly
Callahan invaded his thoughts,
again.
Since the moment Bree and Molly
had become BFFs, his conniving sister had been working to match them up. At
first, Jack had been amused – she wasn’t anything like the tall, cool models he
generally attracted. As time passed, however, his amusement faded to irritation
as he realized that Molly didn’t have to be a supermodel to be a danger to him.