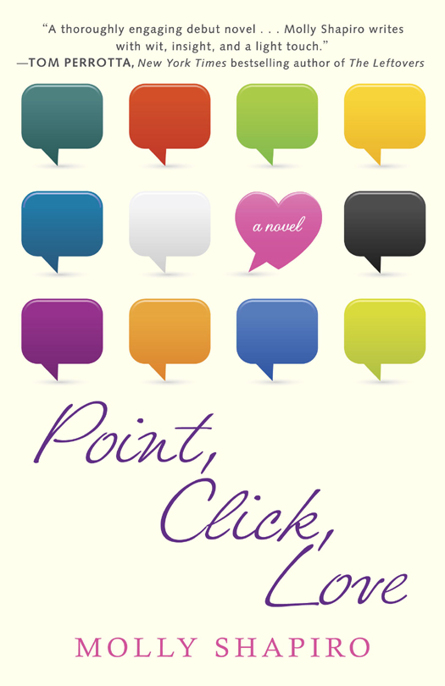 Point, Click, Love
is a work of fiction. Names, characters, places, and incidents are the products of the author’s imagination or are used fictitiously. Any resemblance to actual events, locales, or persons, living or dead, is entirely coincidental.

BALLANTINE is a registered trademark and the Ballantine colophon is a trademark of Random House, Inc.

I
t had been two whole years since Katie divorced Rob, two years since she declared she was through with men. “I’ll never be with a man again,” she had said, her family and friends nodding and smiling politely.

Back then, Katie knew they didn’t believe her. She knew they thought she’d find a new husband within a year or two and get right back on track. After all, she was only thirty-two when she divorced. In fact, they thought she’d find someone even better than Rob. He’d be a big-time executive for a pharmaceutical company, make lots of money, and install Katie and her two children in a big McMansion overlooking a golf course. She’d drive around in a shiny black SUV and would never have to work again.

That was their fantasy, not Katie’s. Katie no longer bought into
all that crap. Pharmaceutical executives were dull, McMansions fell apart after a few years, and SUVs were bad for the environment. Hadn’t they heard about global warming?

Katie was proud that after two years as a divorcée she had proven them all wrong. She really was through with men, or at least through with marrying them, living with them, cooking and cleaning for them, having their babies, and putting up with their endless deficiencies.

She hadn’t always been so sure. When she first separated from Rob, she’d look around at all of her friends and neighbors who were still together and think, Everyone’s so happy! Everywhere she turned there were young lovers walking hand in hand, smiling couples pushing strollers, and families kicking soccer balls on lush green lawns.

It didn’t take her long to see past the illusion. Most of those young lovers were destined to break up. If they didn’t break up, they’d end up getting married, having babies, being sleep deprived, arguing over whose turn it was to do the bath, and going to bed mad. And if they made it through all of that, they’d be too busy driving their kids to play dates and soccer tournaments, arguing about finances, and worrying about getting laid off to give each other a second glance.

No, Katie wanted no part of it. But what she didn’t account for was that, sooner or later, she would need to have sex.

She considered a number of options. The first that came to mind was asking Rob if he would oblige. After all, sex was always good with Rob, and he was also still single. She had no feelings for him anymore and was sure he didn’t harbor any for her either. Maybe they could factor in a few quickies along with child support and alimony. Katie instantly realized that would never work.

And so she decided to take care of her need for sex in the same way she took care of paying her bills, finding cheap airfare, and buying her kids’ school uniforms—she went online.

Katie had seen ads on TV for online dating, so she picked the site that seemed the least likely to yield “true love.” She typed in her basic requirements—male, twenty-five to forty-five, within a twenty-mile radius—then hit “enter.” Suddenly her screen was full of fuzzy little photos of men of all colors, shapes, and sizes.

She felt like a kid in a candy store, only this was a store where all the candy seemed just a slight bit off. The Milky Ways didn’t have any caramel, the peanuts in the Snickers were kind of stale, and inside the smooth colorful shells of the M&Ms lurked something dark and sinister.

At first, Katie was put off by all that facial hair, all those balding heads, all those big guts and bulging biceps. She kept thinking that these were “real” men. Not that Rob wasn’t real; it was just that she’d never stopped seeing him as the seventeen-year-old boy she met in high school. They had started dating during their junior year, stayed together all through college, and married at twenty-two. After fifteen years together, Rob never seemed to change much. He maintained a full head of hair, was always clean shaven, and his body remained slim and lean. He was cute in a boyish, nonthreatening way—the kind of guy twelve-year-old girls would fall for.

As she scrolled through all those eager faces, she crinkled her nose, squinted her eyes, tilted her head. Maybe if she looked from exactly the right angle they would seem more appealing.

Katie knew she would have to let go of all her preconceived notions. Maybe it would be nice to be with a big, hairy, balding, muscular man. Maybe that was just what she needed.

T
he first couple of weeks on Match.com were a little bumpy, but once Katie got the hang of it, she was hooked. She would find a man she was interested in and send him a short, clever email, something about the movies he liked or the books he read or the places he’d been. When she consistently got no reply, she figured out that these men wanted to be the pursuers, so she sat back and waited. Sure enough, being the quiet, demure female worked online too, and there was no shortage of men to choose from.

She noticed that the young, cute ones were boring. “Hey, how’s it going?” they’d write. “Nice day, huh?” “Can’t wait for Friday night!” The older ones were more interesting. Katie had specified she wanted men under age forty-five, but that didn’t keep the fifty-year-olds and even a few sixty-year-olds from trying to woo her.

One fifty-seven-year-old didn’t have a photo up but described himself as a dead ringer for Clint Eastwood. Katie wondered why a Clint Eastwood look-alike wouldn’t want his picture up. He told her he was a real estate developer who traveled regularly to Hawaii, Central America, and the Virgin Islands. He specialized in hotels but spent half his time helping low-income families build homes out of corrugated metal and cinder blocks. He was a gourmet cook, spoke eight languages (only three fluently), and owned homes in San Francisco, Miami, and New York City. He realized he was out of her age bracket but found that the women his age were too matronly. He reassured Katie that he always satisfied his girlfriends. He wrote that one former girlfriend in particular, age twenty-two, frequently contacted him, practically begging him to
come back to her. She told him once that when she masturbated, she always thought of him.

At that point, Katie decided to move on.

W
hen Katie and Rob broke up, she knew it was right from the very first moment. She never missed Rob, never longed for him. What she grieved over was the loss of her marriage, that concept that she had completely bought into, that thing that would give her life meaning. Ever since she was a little girl, Katie had struggled with the meaning of life. What is it all for? she’d ask herself. She always concluded that it was love—family and love. While she was married, she had a nagging feeling that the love she felt for Rob wasn’t exactly the stuff the meaning of life is made of. Whenever she saw a movie where the lovers fell passionately into each other’s arms, she wondered if she had anything close to that with Rob. Even all those Bachelors and Bachelorettes on TV seemed more in love after knowing each other for a few weeks.

She then figured it all came down to lust, not love. That was what had everybody so confused. All those people on TV and in the movies and in books weren’t madly in love, they were incredibly horny. There was no such thing as “love at first sight,” it was just “I want to screw you at first sight.” Katie wished they would show what happens after the love is finally consummated, after that first romantic kiss in the pouring rain, after the passionate night in bed, after the “I dos.” All that love and passion did not—could not—last forever. Why couldn’t people just admit it?

So if Katie’s love for Rob did not equal the meaning of life, what was life all about? Getting bland emails from overgrown boys who couldn’t put a sentence together, or explicit come-ons from rich old fogeys who mingled good works toward men with nasty deeds toward women?

Being single again made Katie feel like she had been plunged back into a world that she was finished with long ago. She felt like she was in high school again, and she was never one of those people who longed for the good old days. But she knew she had to find a way to make the best of it.

That’s how she got through the pain of divorce and the heartbreaking loss of her marriage—making the best of it. “It is what it is,” she kept telling herself, even through the tear-soaked viewings of her favorite romantic comedies like
Sleepless in Seattle
and
Something’s Gotta Give
. Even through the pitying looks from the other moms at school, having to go back to work, slogging through the chores by herself, and attending dinners with friends where she was always the odd man out—Katie closed her eyes and repeated to herself, “It is what it is.”

Everyone agreed that she was handling it all amazingly. One friend even wrote a letter about her to Oprah, and for a brief moment Katie was sure she’d be invited onto the show to discuss her incredible coping mechanism. She would write a book about it called
It Is What It Is
, and it would be a bestseller. She’d write about all her insights on love and marriage—“It’s not love, it’s lust!”

“Marriage doesn’t work!”—and it would change the way the country—no, the world!—looked at things.

But before she could do all that, Katie had to first convince herself, which would be tough, since no matter what had happened, deep down she still believed in love. Maybe Match.com could cure her of that.

D
uring the two years in which Katie swore off men, it seemed that they had sworn off her too. It was as if they knew that she was not interested and would not respond to their advances. And, sure enough, there weren’t any advances to turn down. But once Katie went online and decided to give men another shot, she found that men in the real world were all of a sudden noticing her. Dads picking their kids up at school, the checkout boy at the grocery store, the man behind the desk at the DMV.

One time Katie went out for lunch with her kids and noticed a guy sitting in the next booth with two other men. He was cute and looked at her a couple of times, but she didn’t think anything of it. After the men left, the waiter brought over the man’s card instead of the check.

“He paid for your lunch,” the waiter told Katie as he handed her the card.