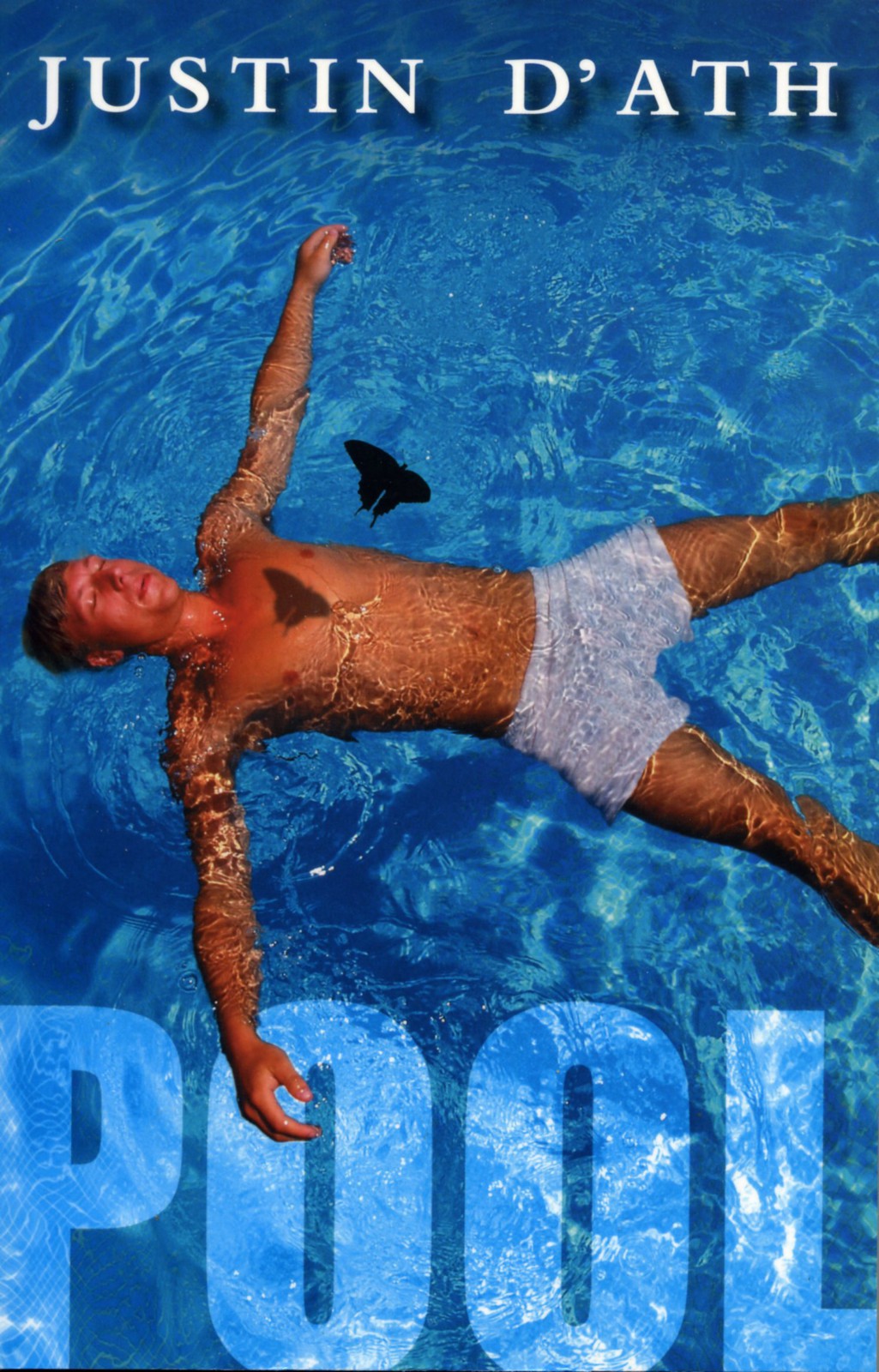 Something strange has happened to the public swimming pool in New Lourdes, Victoria. The water is no longer level and is rumoured to have curative powers. When sixteen-year-old Wolfgang Mulqueen takes a summer job at the pool, he meets Audrey, a blind girl who claims she's nocturnal. With the discovery of a butterfly unknown to science, and an unusual request from Audrey's father, Wolfgang finds himself inextricably drawn into an eighteen-year-old mystery, the tragic resolution of which will change his life forever.

One of twelve children, Justin D’Ath grew up on a farm in New Zealand. Most evenings he and his brothers read aloud or told stories to each other. ‘We didn’t have TV, so we learned to use our imaginations.’

By the time Justin was eleven, he had completed his first book – a ten-page cartoon about his pet turtle, Bubble – and begun a novel.

His first publication was a monthly cartoon strip in a magazine, which he drew in his tent while he travelled around Australia on his motorbike. Since then, Justin has written a variety of novels and award-winning short stories. He has also studied to be a priest, picked fruit, built cars, mined for iron and worked in a sugar mill.

Justin’s novels have been published in many countries, including Italy, Germany and Denmark. He lives near a river in Flowerdale, in the hills north of Melbourne. Visit his website at:

Why did the Chykkan cross the Galaxy?

This publication is copyright. Apart from any use as permitted under the Copyright Act 1968, no part may be reproduced by any process without prior written permission from the publisher. Requests and inquiries concerning reproduction should be addressed to Ford Street Publishing Pty Ltd, 2 Ford Street, Clifton Hill VIC 3068.

This project has been assisted by the Australian Government through the Australia Council, its arts funding and advisory body.

For my daughter Fiona, who shared her school library books with me.

Nobody else had noticed it. There must have been five hundred people at the pool that afternoon – a thousand eyes – yet only Wolfgang saw the butterfly.
He
saw nothing else. A glasswing, he thought at first. But as he watched its dancing flight, he began to have doubts. Its wing beats were slower, there was too much colour on the forewings. Pale yellow or white with black edges, darker on the undersides. A migrant from up north? One of the tigers? He’d have to get closer.

But he wasn’t supposed to leave the office unattended. Where was Michael? There was no sign of him anywhere. Probably chatting up some sweet-faced fifteen-year-old behind the kiosk, Wolfgang thought sourly. Worse, she was probably falling for it. It wasn’t a fair world. Who else was on today? The new guy, Devlin or Declan or whatever-his-name-was. Wolfgang searched the pool’s busy perimeter but couldn’t see him, either. And Christie was on her lunchbreak.
So
frustrating!

The butterfly was over by the gardens near the pump house now. Wolfgang watched greedy-eyed as it circled one of the brightly flowering buddleias, its wings semaphoring their brightdarkbrightdark invitation down the length of the pool. This was torture.

Stuff it! he thought. Closing and locking the cash register, Wolfgang slipped out of the office – out into the bright daylight with its fug of chlorine that hit him like a hot invisible wall – and hurried around the pool’s wet apron in his socks. He’d forgotten his sneakers but that didn’t matter. All he cared about was the butterfly. Please make it wait! Wolfgang prayed. But when he was still ten metres away, the butterfly abandoned the buddleias and flicked high into the air. So much for the power of prayer. Wolfgang could only stand and watch, impotent without his net, as it looped out, round and down in a wide, dizzying spiral that took it right in among the swimmers and nearly stopped his heart. He needn’t have worried; the butterfly ran the gauntlet of threshing limbs and flying water with the agility of a bat, emerging unscathed at the far side of the pool to go fluttering off across the towel-quilted grass towards the far fence.

Wolfgang was almost running when he rounded the high end of the pool, so intent on the escaping butterfly that he nearly collided with two pilgrims coming the other way.

‘What’s the hurry, dear?’ asked the gently smiling woman in the wheelchair.

‘I’m thorry,’ Wolfgang stammered. He hoped Mrs Lonsdale wasn’t watching. Both the woman and the much younger man pushing the wheelchair – her son? – wore bathers. ‘Do you need a hand on the ramp?’ he offered lamely.

The son shook his head. ‘We can manage, thank you.’

As soon as they had moved off towards the wheelchair ramp, Wolfgang dragged his socks off, balled them up and stuffed them in his pocket. ‘You idiot, Mulqueen!’ he muttered under his breath, allowing his gaze one final sweep over the crowded lawns where the butterfly had disappeared. And there it was.

The blind girl was lying where she always did, in the shade of the big peppercorn that leaned in over the fence from the car park. Wolfgang zigzagged through the towels and bodies and babies’ pushers towards her.

‘Excuse me. There’s a butterfly on you.’

She lay on her back, the high-crowned raffia hat she always wore completely covering her face. She seemed not to have heard him.

‘Huh?’ said the blind girl. She reached under her hat and removed a tiny earpiece. He hadn’t noticed the thin black cord snaking up from an MP3 player on the grass beside her backpack. ‘Are you talking to me?’

‘Yes. There’s a butterfly on you.’

‘On your dress.’ Apart from the pool staff and one or two of the pilgrims, she was the only fully-clothed person at the pool. She even had her shoes on.

‘Do you mind if I take a closer look?’ Wolfgang asked.

‘Be my guest,’ she said, twisting the cord from the earpiece around her thumb. Her guide-dog, an almost-white labrador, watched with worried eyes as Wolfgang crouched over her.

‘I presume there really is a butterfly?’ she said through her hat.

‘Of course there is.’

‘Describe it to me.’

He wet his lips. ‘It’s mostly brown and cream with orange wavy patterns and white ... Sorry, it’s hard to describe a butterfly without bringing colours into it.’

Wolfgang felt the heat rise in his face. She wasn’t like a blind person – or how he’d imagined a blind person would be. ‘Its wings are closed,’ he said, slowly bringing his cupped hands down, one on either side of it, ‘so all I can see are the undersides. But before – when it was flying – it looked mostly yellow and black.’

‘About seventy, seventy-five millimetres across.’

She spread her thumb and forefinger, as if imagining its wingspan. ‘Is that big for a butterfly?’

‘Quite big,’ he said, his attention caught by her discoloured fingernails. ‘It’s got these four pointy bits at the back, sort of like a swallowtail.’

‘Bizarre. A butterfly with a bird’s tail.’

‘Sorry, I’m not very good at explaining. A swallowtail is a type of butterfly. It’s got long taily things on its hind wings – but only two of them, not four like this one.’

‘I’ll tell you a secret,’ the blind girl said. ‘You don’t have to talk so loudly. I might be blind but I’m not deaf.’

He might have said sorry again had the butterfly not chosen that moment to fly up out of the corral of his poised hands. It was very quick; there was no time to react. Wolfgang and the labrador watched it circle up over their heads and escape across the high chain-link fence into the car park. If only he had brought his net.

‘Do you think it’d let me touch it?’ the blind girl asked softly.

She lifted the front of her hat and seemed to look right through him. She was older than he was, seventeen or eighteen, with very pale skin and a dusting of orangey freckles across her nose and cheeks. ‘How do I know it isn’t all a big con?’

‘Butterflies,’ she said. ‘I’ve never touched one, I’ve never heard one and I’ve certainly never
seen
one. How do I know everyone isn’t just pulling my leg?’

Wolfgang tried to imagine a world without butterflies. ‘I can catch one for you,’ he offered.

‘Wouldn’t that hurt it? I mean, aren’t they very delicate?’

‘They’re actually not as delicate as most people think. But you have to know what you’re doing.’

‘And
you
know what you’re doing?’ the blind girl said.

Her forehead puckered and Wolfgang knew immediately he had revealed too much. When was he going to learn to keep his big mouth shut?

‘That’s memorable. What do you do with the butterflies once you’ve caught them, Wolfgang?’

He didn’t want to say. ‘I collect them.’

‘You
kill
them, in other words.’

‘I do it humanely. They don’t feel a thing.’

The blind girl sat up and dragged her backpack closer. She was thickset, with heavy upper arms and white, freckled shoulders. A Y-shaped twig was tangled in her long red hair.

‘I’m glad,’ she said, fishing a packet of cigarettes and a lighter from one of the backpack’s outer pockets, ‘you didn’t collect the one that landed on me.’

Wolfgang watched her light up a cigarette. Smoking wasn’t allowed at the pool – there were signs everywhere – but he didn’t dare challenge her. He could feel the dampness from his socks seeping through from the back pocket of his shorts.

‘Thanks for letting me look at it,’ he said.

‘Thank the butterfly.’ She turned her head to one side and blew a perfect smoke ring. ‘What’s with the way you talk?’

It was something only a blind person would ask, and even then it seemed rude. ‘I –’

‘Wolfgang Mulqueen,’ Mrs Lonsdale’s voice rang over the loudspeakers, ‘would you come to the office immediately.’

Sprung. He stood and brushed his knees clean of grass and dirt. ‘I have to go.’

‘Do you work here?’ asked the blind girl.

‘Just in the holidays.’

‘I thought I recognised your voice. You’re the one at the gate, aren’t you?’

See
you later, he thought. Damn.

‘Hey, Wolfgang,’ the blind girl called after him. ‘If I meet any more interesting butterflies, I’ll give you a hoy.’