Read Predators I Have Known Online

Predators I Have Known 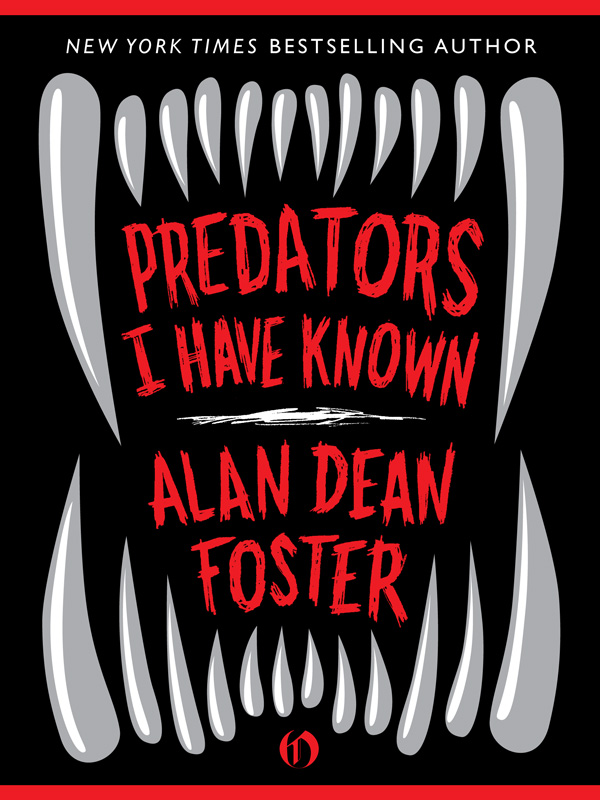 IV. THE CUTE LITTLE OCTOPUS AND THE HOMICIDAL SHELL

IX. EYES ON THE TRAIL

X. EVER WONDER HOW WE TASTE?

Southeastern Peru, May 1987: A Sartorial Digression

XIII. DRACULA IS A MUTE

OVER THE PAST FORTY YEARS,
in the course of visiting six of the seven continents and a good portion of the world’s seas, it has been my privilege to observe and marvel at thousands of different animals in their natural habitats. Every one of them, from leafhoppers to leeches, has been in one way or another fascinating, intriguing, and beautiful.

Still, there is no doubt that of all Earth’s creatures we retain a special admiration for those bold enough, brave enough, and tough enough to contend with us on our own terms. So used are we to making food of every other living thing that when one comes along that is inclined—circumstances permitting—to make a meal of us, we are often struck dumb with admiration at the sheer audacity of it. Are not we humans the masters, the controllers, the lords and overseers of this world?

As civilized and populated as it has become, not always.

Thankfully, I say. Most of us live daily lives far too cosseted. Surrounded by the artifacts of our burgeoning, squalling, sprawling civilization, it is all too easy to lose touch with Nature and all that she proffers.

Sometimes she offers us contacts we would rather not make. When they occur, such moments, such encounters, offer us a charge, an exchange, a taste of something our ancestors knew intimately but we have largely forgotten. It is a good and useful thing to experience again such moments in time. At a suitable distance, of course.

Sometimes, the intervening space contracts, often when we least expect it to do so. Then the adrenaline surges, the pupils expand, the heart pumps a little (occasionally a lot) faster, and we feel more alive than usual. There is inestimable beauty in such encounters. At least, there is as long as you watch where you are stepping, or putting your hand, or focusing your eyes.

I write a fair amount of science fiction. If you think back on the stories you’ve read in that genre, or the films you’ve seen, some of the most powerful images (visual or literary) are those that feature beings that pose a physical threat to our existence. From H. G. Wells’s
The War of the Worlds
to
Alien
and
Predator
, we savor the frisson of fear that comes with imagining there are things Out There that might find us edible, or at the very least would be pleased to extinguish our existence.

What many readers or moviegoers don’t know is that such experiences are present right here on Earth, if one is willing to step outside the boundaries of the familiar and the comfortable and meet those experiences on their own territory. Often such an encounter, as with white sharks or tigers or poisonous snakes, will lead to straightforward renderings of these creatures in the tales I tell. Other times, they’ll provide inspiration, a carnivorous springboard, to the invention of predators more alien and outré than those that actually live here on our home planet, as in books like
Midworld
,
Sentenced to Prism
, and the Journeys of the Catechist trilogy.

Step outside the boundaries of the familiar, I urge. Herewith some of the steps I have taken over the years; all memorable, all engraved permanently in my mind, all capable of reiterating that special charge of which I have written. None of them has resulted in any of the creatures described making a meal of all or part of me. 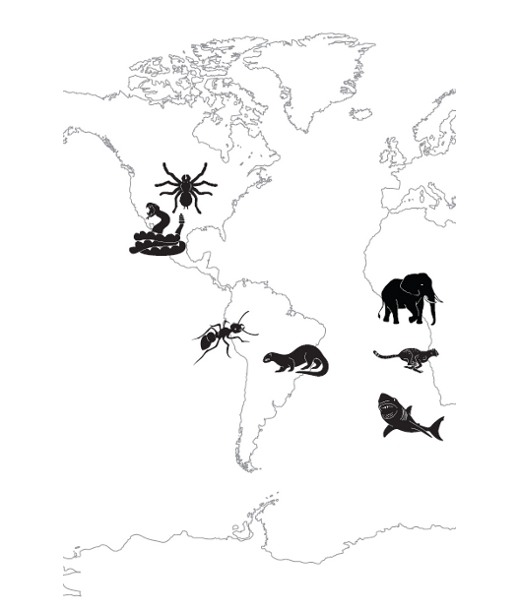 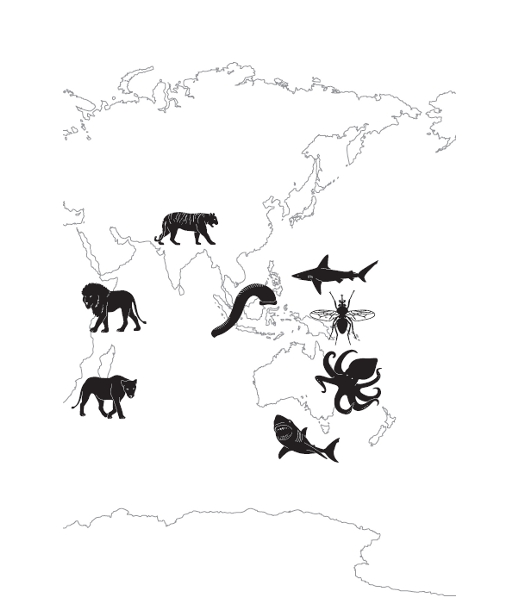 THEN THE TIGER SAW ME,
and everything changed.

The world looks different from the back of an elephant. Riding on a bench seat slung over the spine of an ambling elephant is akin to being on a very small but very stable ship in the midst of a choppy sea. There is more pitching than rolling, complicated by the fact that another rider is seated in close proximity to you on the other side of the perambulating pachyderm while the guiding mahout straddles the animal’s neck sans saddle or any other tack. I thought it would be like riding a horse. It’s not. Horses jolt and jounce you; elephants don’t. Horses have style. Elephants have . . . mass.

We were patrolling the vast, hilly, uninhabited forest of Kanha National Park. Located in the eastern state of Madhya Pradesh, the nearly 800-square-mile Kanha has a reputation as the best-managed national park in India and forms the core of the Kanha Tiger Reserve. Here, in these rambling, rolling woods, Rudyard Kipling found his inspiration for the
Jungle Book
tales of the boy-cub Mowgli and of Baloo, Bagheera, and his other animal friends and enemies.

Far from the tourist-saturated haunts of Agra and Jaipur, not easy to reach from the great cities of Mumbai and Kolkata, the reserve’s remoteness and lack of accessing infrastructure (i.e., terrible roads) ensures that it is one of the least visited national parks in the country. Bad for tour buses. Very good for tigers. And also for those who fervently desire to see one of the great cats outside the confines of a zoo or wild animal park and in its natural surroundings.

A tiger in a zoo is like a bucket of bright red paint dumped on an asphalt road. How, one wonders while marveling at the resplendent amalgam of orange body, black stripes, and white highlights, can it possibly sneak up on prey? Surely, such a boldly demarcated predator must stick out in the wild as plainly as it does in front of our moat-and-railing shielded selves? What more blatant a four-legged banner, what more sharply defined a feline body from whiskers to tail, exists on the planet? Why, it’s impossible to
avoid
seeing it!

But put it in its thick native forests of sal and bamboo, in the depths of the surroundings for which it has evolved, and the tiger vanishes. Hundreds of pounds of carnivorous cat become as difficult to see as a dispersing wisp of orange smoke. The tiger does not dwell in the dark steaming greenhouse of cheap jungle films. It thrives in dry woods of brown and yellow, of broken patterns and shattered shade where tree blends into bush, bush into rock, and rock into shadow. You can gaze directly at one of the great meat eaters from a short distance away and still not see it.

The tiger is patient. The tiger knows how to wait. Nature does not make mistakes when she is handing out camouflage.

Margaret the Queen by Nigel Tranter
Cats And Dogs: A Shifter Novella by Georgette St. Clair
The Moses Virus by Jack Hyland
Crush by Crystal Hubbard
Captured by Johansen, Tina
Wave by Mara, Wil
More Than You Know by Beth Gutcheon
A Bramble House Christmas (Carrigans of the Circle C Book 6) by CJ Carmichael
A Natural Act (Contradictions) by R. J. Sable
Rise of the Spider Goddess by Jim Hines
Our partner