Prince of Air and Darkness 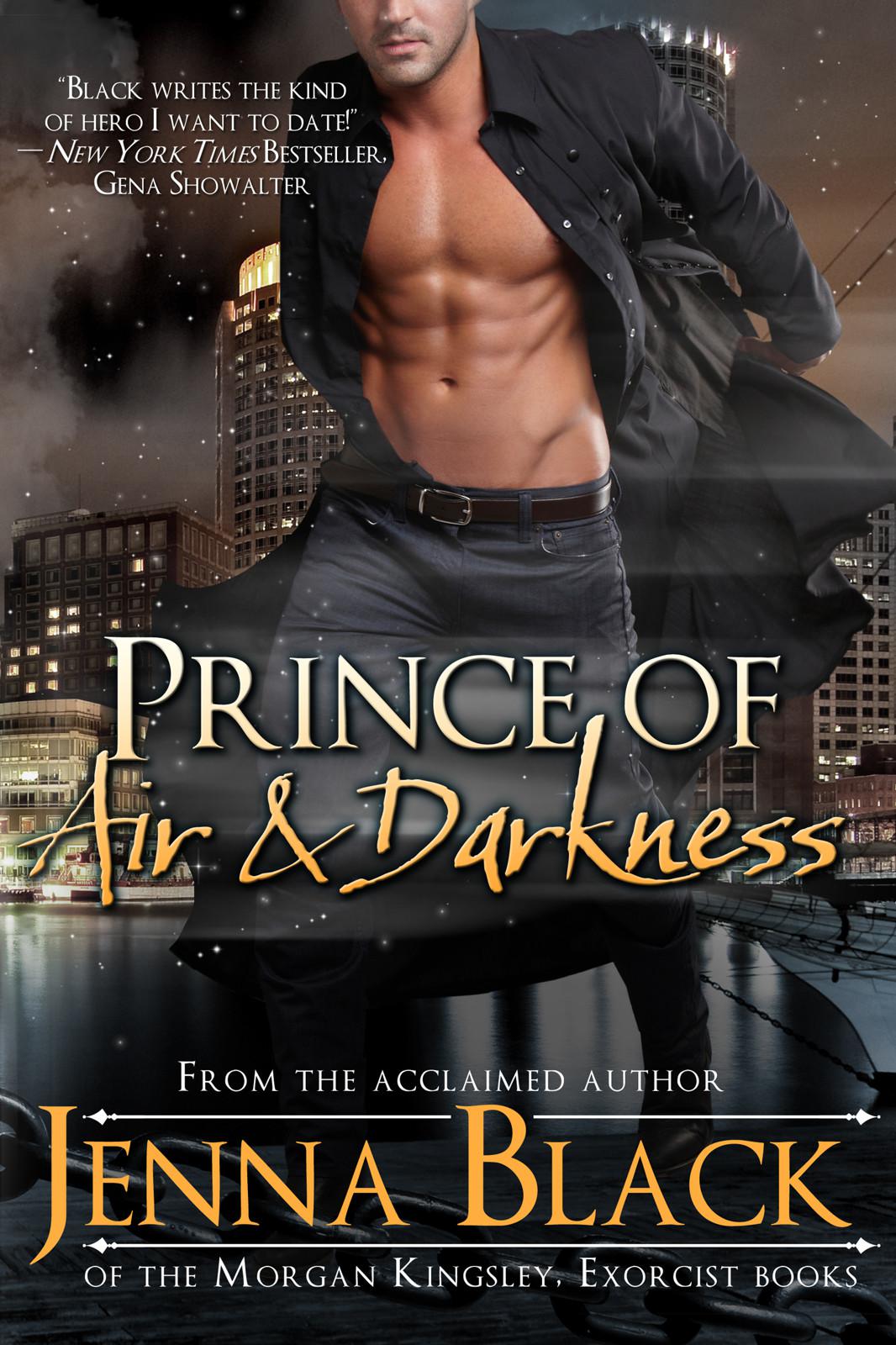 Praise for the Writing of Jenna Black

For the Guardians of the Night series:

This . . . was just amazing. I couldn’t read it fast enough. The action was non-stop and while I don’t want to give any spoilers away, the ending just left me wanting more!

—
The Best Reviews
on
Secrets in the Shadows

—
Night Owl Romance
, on
Watchers in the Night

An excellent addition to the genre.

—
The Romance Studio
, on
Watchers in the Night

With a very unique twist, Jenna Black spins a tale of evil, lesser evil, not so good, and good. With many shades of gray the word that Ms. Black has created keeps its gritty reality true throughout.

—
Fallen Angel Reviews
, on
Watchers in the Night

The characters, lead and secondary, are so well written you never want the book to end.

—
RomanceJunkies.com
, on
Watchers in the Night

Black’s voice is a perfect fit for her supernatural stories.

—
RT Book Reviews
on
Secrets in the Shadows

Jenna Black has perfected the art form of adding just the right edge of violence to an intricate plot that makes me wonder what else will happen to this ground of guardians who are one wrong deed away from being killers themselves.

—
Joyfully Reviewed
, on
Shadows on the Soul

Vampire romance fans who haven’t yet discovered the Guardians series should add it to the top of their paranormal reading list.

—
BookLoons Reviews
, on
Shadows on the Soul

Shadows on the Soul is an awe-inspiring dark vampire romance with tortured characters and an exciting plot. I highly recommend it.

—
Once Upon a Romance Review
, on
Shadows on the Soul

—
SFRevu
, on
Shadows on the Soul

—
RT Book Reviews
, on
Shadows on the Soul

For the Morgan Kingsley series:

An outstanding beginning to a new supernatural series! The book starts out with action and only gets fasters . . . I sincerely believe the author to have a major winner on her hands with Morgan Kingsley. 5 stars!

—
Huntress Reviews
, on
The Devil Inside

The Devil Inside
is nail-biting, powerful, and passionate all in one. I couldn’t put this story down. 5 ribbons!

—
Romance Junkies
, on
The Devil Inside

—
Fresh Fiction
, on
The Devil Inside

Fast paced with a dark edgy feel,
The Devil Inside
is one urban fantasy not to be missed, and Ms. Black is proving herself an author to watch out for.

—
Love Romances and More
, on
The Devil Inside

With characters you can’t help but love, and those you love to hate, Ms. Black begins her new series with a storyline that’s full of action and surprises. It’s sometimes dark, often loving and completely sexy.

—
Darque Reviews
on
The Devil Inside

[A] winning heroine, a well-crafted contemporary world where demonic possession is just a part of life and a nice balance of mystery, action and sex . . . [A]n urban fantasy series kickoff full of promise.

—
Publisher’s Weekly
, on
The Devil Inside
.

The Guardians of the Night Series:

Watchers in the Night

Secrets in the Shadows

Shadows on the Soul

Hungers of the Heart

The Devil You Know

PRINCE OF AIR AND DARKNESS

PRINCE OF AIR AND DARKNESS

All characters and events in this book are fictitious.  Any resemblance to real people, alive or dead, is entirely coincidental

To the Deadline Dames,

who are always there for me.

I don’t know what I’d do without you.

Hunter pulled his leather coat tightly closed and surreptitiously tucked his hands under his armpits. The breeze held a sharp November bite, and he had enough mortal blood in him to feel the cold keenly. He wished his mother had waited for spring to engage in this latest round of Court intrigue.

He slanted a glance in her direction. She was sitting beside him on the bench in Rittenhouse Square, looking serene and regal and not the least bit cold. The heavy mink coat that draped her body was for effect only. She must have felt his eyes on her, for she turned her head his direction.

Hunter abruptly looked away. No one, not even her son, wished to be the recipient of the full attention of the Queen of Air and Darkness.

“Are you growing impatient, my son?” she asked.

Her voice had a brittle, unsettling edge to it, and it chilled him more than the cold air. But showing fear in front of her was like waving a bloody steak before a wolf, so he stretched out his legs, crossing them at the ankles, and tried to look bored. “We’ve been out here almost an hour,” he said, not looking at her. “When is this little morsel going to make an appearance?”

“Sooner than you think.”

Hunter sat up abruptly and turned to see his mother smiling at someone in the distance. It was the same smile she wore when she ordered a particularly gruesome execution, and he felt an instant of pity for the recipient of that smile. Then, he followed her gaze.

His eyes were drawn instantly to the woman who held his mother’s attention. “Is that her?” he asked. Out of the corner of his eye, he saw the Queen nod. He pulled the brim of his hat down so that he could regard the target more closely without being seen.

His first impression was that she was rather unprepossessing. An ill-fitted puffy coat hid any shape she might have had, and her cheeks were apple red from the cold. Her jeans were threadbare, but not in a fashionable way. Frizzy red curls peeked out from under an ugly knit hat pulled down all the way to her ears, and a mismatched knit scarf was wrapped around her throat. Warm she might be, but he wondered if she’d ever seen herself in the mirror in that get-up.

She must have inherited more than her fair share of her mother’s genes, Hunter decided. He couldn’t discern even a passing resemblance to Finvarra, the High King of the Daoine Sidhe. He cocked his head at his mother. “Are you certain she’s Finvarra’s get?” he asked.

The Queen smiled savagely. “Quite certain, my son. From what I’ve heard, he was staggering drunk the night he sired her. I suspect he never even noticed her mother’s face, being entirely absorbed with her . . . other charms.”

Hunter made a face at the thought. On a number of occasions after a successful hunt, he’d celebrated by visiting bars in the mortal world. He’d gotten pretty drunk a number of times, but never so drunk that he would accidentally bed someone ugly. The target—Kiera Malone—sat down on a bench only a few yards away, pulling a book from the pocket of her coat.

“The woman must be mad,” he muttered under his breath. No mortal in her right mind would sit out in this cold just to read. His own feet felt like lumps of ice in his heavy boots, and he suspected his lips were an unappealing shade of blue.

Hunter shrugged. “Ordinarily I wouldn’t give her a second glance,” he said with a faint curl of his lip. “But I doubt bedding her will be overly unpleasant.” He tried to muster some enthusiasm for his Courtly duty, but malice didn’t come naturally to him, and if he wasn’t careful, pity and regret would sneak through his defenses.

The Queen snorted. “I was not enquiring about your enthusiasm for your mission. I was asking if you thought you could manage it.”

Hunter stiffened at the implied insult. He might not have the seductive power of a full-blooded fey, but he’d yet to meet a mortal woman he couldn’t seduce. “Of course I can manage it!” he snapped. “She’s homely enough that she’ll be panting like a dog the moment I turn on the charm.” It was an uncharitable assessment—while she might not be beautiful, she certainly wasn’t homely—but it was the kind of disdain his mother expected of him.  He’d learned at an early age that failing to meet her expectations carried a heavy price.

The Queen’s eyes glittered dangerously at his tone, and Hunter tensed. That glitter usually preceded a particularly painful disciplinary action. Disdain for the mortal, she would encourage; disdain for herself, she would punish with her trademarked cruelty.

“I will have difficulty performing my duties if I am in pain,” he told her in a mild, bland voice that sounded much calmer than he actually was. Only a fool would be calm when the Queen of Air and Darkness was angry with him.

Her cold, beautiful face broke into a smile that did nothing to warm her aspect. “Why, Hunter, dear, what makes you think I would hurt you?”

His insides twisted at the malevolence of her gaze. Being her son offered no protection, although other members of the Unseelie Court grumbled about perceived privileges. Hunter had known from the time he was a little boy that she would not hesitate to execute him—slowly and painfully—if he ever displeased her. Just as she had executed his father when the foolish mortal had tried to take Hunter away from the Unseelie Court.

It took all Hunter’s effort to keep his hatred from showing on his face. No matter what he said or did, she would undoubtedly keep him alive and relatively unharmed until he had done her wishes and fathered a child on Finvarra’s bastard daughter. But he mustn’t give her any reason to dispose of him afterward, either. His life might not be the stuff of dreams, but he was rather fond of it nonetheless.  And Hunter had plans for the child his mother had ordered him to sire, plans she would find very distasteful indeed. So he fought the hatred that roiled within him, fought to keep his expression bland and thereby soothe her ire.

The Queen reached out and touched his cheek with her bare hand. He knew better than to flinch, no matter how much the touch of her hand made his skin crawl.

“My beautiful son,” she murmured, with something that could almost be taken for affection if he didn’t know better. “You will have Finvarra’s bastard flat on her back in no time, I’m sure of it.”

He was sure of it as well, and though a small, human part of him pitied the woman whose life he would destroy, he shoved that pity down into the darkness of his soul. He could not afford pity, nor kindness, nor conscience. He was his mother’s creature, beaten and shaped into the mold of an Unseelie Prince. Her creation, her sword arm, her puppet. If the role chafed, that was just too bad. His destiny had been sealed the moment he was born.

The Queen’s hand slid from his cheek, and he glanced once more at his target.

Kiera Malone was looking right at him, and he froze like a rabbit. There was something odd about her gaze, something strangely knowing. His pulse quickened and he found himself unable to look away. Had he doubted for a moment that Faerie blood flowed in her veins, the otherworldly look in her eyes quelled that doubt. Then she blinked and turned away, frowning, and she looked once more like the mortal woman she was.