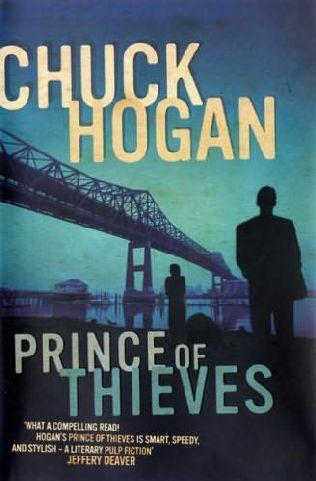 SCRIBNER
1230 Avenue of the Americas
New York, NY 10020
This book is a work of fiction. Names, characters, places, and incidents either are products of the author's imagination or are used fictitiously. Any resemblance to actual events or locales or persons, living or dead, is entirely coincidental.
Copyright (c) 2004 by Multimedia Threat, Inc.
All rights reserved, including the right of reproduction in whole or in part in any form.
SCRIBNER and design are trademarks of Macmillan Library Reference USA, Inc., used under license by Simon & Schuster, the publisher of this work.
Designed by Lauren Simonetti
Text set in Galliard
Library of Congress Cataloging-in-Publication Data
Hogan, Chuck.
Prince of thieves : a novel / Chuck Hogan.
p. cm.
1. Criminals-- Fiction. 2. Bank robberies-- Fiction.
3. Boston (Mass.)-- Fiction I. Title
PS3558.O34723P75 2004
813'.54-- dc22
2004045363
ISBN 0-7432-7051-7
Visit us on the World Wide Web:
http://www.SimonSays.com
To my mother:
How great the darkness.
For where your treasure is, there will your heart be also.

Charlestown, Massachusetts's reputation as a breeding ground for bank and armored-car robbers is authentic. Although faithful to the Town's geography and its landmarks, this novel all but ignores the great majority of its residents, past and present, who are the same good and true people found most anywhere.

While Charlestown is home to some of the most decent people in the city, it has, like no other neighborhood, a hoodlum subculture that is preoccupied with sticking up banks and armored cars.

... a community to which more armored-car robbers are traced than any other in the country, according to FBI statistics.

This self-described Townie spoke... on condition of anonymity, describing what it was like to grow up in Charlestown. "I'm mighty proud of where I come from. It's ruined my life, literally, but I'm proud."

First, a toast. Raise a glass. Solemn now:
To the Town.
To Charlestown, our one square mile of brick and cobblestone. Neighborhood of Boston, yet lopped off every map of the city like a bastard cropped out of a happy family portrait.
This is the heart of the "Old Eleventh," the district that first sent the Kennedy kid to Congress. The one square mile of America that shipped more boys off to World War II than any other. Site of the Battle of Bunker Hill, the blood of revolution sprinkled like holy water over our soil and our souls. Turf and Tribe and Townie Pride-- our sacred trinity.
But now look at these outsiders snapping up our brownstones and triple-deckers. Pricing us out of our own mothers' houses. Yuppies with their Volvos and their Asian cuisine, their disposable incomes and contempt for the church-- succeeding where the British army failed, driving us off our land.
But sure, we don't go away so easy. "Don't fire until you see the whites of their eyes!"-- that was us, remember. This carnation here may be a bit brown at the edges-- but see it still pinned to the tweed lapel over my beating Townie heart.
Be a hero now, reach me that jar. We'll have a hard-boiled egg with this last one, see how she goes down. It's caps off, gents. Here's to that towering spike on a hill, the granite battle monument that'll outlast us all: the biggest feckin' middle finger in the world, aimed right at good brother Boston and the twenty-first century beyond.
To the Town. Here's how.

8. Frawley at the Tap

9. The Garden in the Fens

14. The Pope of the Forgotten Village

D
OUG MACRAY STOOD INSIDE the rear door of the bank, breathing deeply through his mask. Yawning, that was a good sign. Getting oxygen. He was trying to get amped up. Breaking in overnight had left them with plenty of downtime to sit and eat their sandwiches and goof on each other and get comfortable, and that wasn't good for the job. Doug had lost his buzz-- the action, fear, and momentum that was the cocktail of banditry.
Get in, get the money, get out.
His father talking, but fuck it, on this subject the old crook was right. Doug was ready for this thing to fall.

His blood warmed to that, the broad muscles of his back tingling. He rapped the hard plastic forehead of his goalie mask with his pistol barrel and shook out the cobwebs as he turned toward the door. A pro, an athlete at the top of his game. He was at the height of his powers.

Jem stood across from him like a mirror image: the dusty navy blue jumpsuit zipped over the armored vest, the gun in his gloved hand, and the white goalie mask marked up with black stitch scars, his eyes two dark sockets.

A spear of daylight. A woman's hand on the knob and the kick of a chunky black shoe-- and the swish of a black floral skirt walking into Doug's life.

HE SEIZED THE BRANCH manager's arm and spun her around in front of him, showing her the pistol without jamming it in her face. Her eyes were green and bright and full, but it was his mask that scared short her scream, not the Colt.

Jem kicked the door shut behind the assistant manager, smacking the cardboard caddy out of the guy's hand. Two steaming cups of coffee splattered against the wall, leaving a runny brown stain.

Doug took the bank keys from the manager's hand and felt her going weak. He walked her down the short hallway to the tellers' row behind the front counter, where Gloansy-- identically dressed, masked, and Kevlar-bulked-- waited. The bank manager startled at the sight of him, but she had no breath left for screaming. Doug passed her off to Gloansy, who laid her and the gray-suited assistant manager face-first on the carpeting behind the cages. Gloansy started yanking off their shoes, his voice deepened and filtered by the mask.

Lie still. Shut your eyes. Nobody gets hurt.

Doug moved with Jem through the open security door into the lobby. Dez stood beside the front door, hidden from Kenmore Square by the drawn blinds. He checked the window before flashing a blue-gloved thumb, and Doug and Jem crossed the only portion of the lobby visible from the ATM vestibule.

Jem unfolded a deep canvas hockey bag on the floor. Doug turned the stubbiest key on the manager's ring in the night-deposit cabinet lock, and silver plastic deposit bags spilled to the floor like salmon from a cut net. A holiday weekend's worth. Doug gathered them up five and six at a time, soft bags of cash and checks bundled in deposit slips, dumping the catch into Jem's open duffel.

After raiding the night drop, Doug went on alone to the access door behind the ATM. He matched key to lock, then looked over to the tellers' cages where Jem had the branch manager on her feet. She looked small without shoes, head down, hair slipping over her face.

She said, staring at the floor, "Four. Five. Seven. Eight."

Doug ignored the choke in her voice and punched the code into the mechanical dial over the key. The door swung open on the ATM closet, and Doug unlatched the feeder and pulled the cash cassette. After the long weekend it was less than half full. He scooped out the sheets of postage stamps as an afterthought and dumped them with the tens and twenties into the bag. Then he flipped the service switch, reloaded the empty cassette, and hustled back past the check-writing counter, running the bag through the open security door to the tellers' cages.

There, he retrieved a small strongbox from a drawer at the head teller's station. Beneath some dummy forms and a leftover stack of flimsy giveaway 1996 desk calendars was a brown coin envelope containing the cylindrical vault key.

THEY COULD HAVE BEEN a couple waiting for an elevator, except for the gun: Jem and the manager standing together before the wide vault door. Jem was holding her close, exploring the curve of her ass through her skirt with the muzzle of his .45 as he whispered something in her ear. Doug made noise coming up behind them and Jem's gun moved to her hip.

The digital clock built into the vault door said 8:17. They stood for that one minute in silence, Doug behind the manager, listening to her breathing, watching the hands of her self-hugging arms grip her sides.

The clock changed to 8:18. Doug inserted the key over the thick black dial.

"We know all about panic codes," Jem told the manager. "Now open it clean."

Her hand came out stiffly, steadying itself against the cool steel door and leaving a brief, steamy palm print there before starting in on the dial. When she hesitated after the second turn, Doug knew she had made a mistake.

She dried her quivering hand on her skirt. The second time, she made it past the third number of the combination before her nerves betrayed her, her fingers twisting the dial too far.

"I'm sorry!" she wailed, half in anger, half in terror.

Jem put the gun to her ear. "You have kids?"

She veered away from him, her voice strangled. "No."

"Christ! Parents, then. Do you have parents? Who the fuck can I threaten?"

Doug stepped in, easing Jem's gun away from her face. "How many attempts before the lock triggers a duress delay?"

Doug said, "And how long until it can be opened again after that?"

"Write it
down,
" said Jem. "Write out the combination, I will fucking do it myself."

Doug looked at her grimacing face in profile, feeling her fear. "You don't want us here another fifteen minutes."

She considered that a second, then reached fast for the dial, her hand darting like a bird from a cage. Doug caught her wrist, held it firm.

Fearless by Brynley Bush
Night's Deep Hush: Reveler Series 4 by Erin Kellison
The Peach Keeper by Sarah Addison Allen
The Thorn in His Side by Kim Lawrence
The Daughters of Gentlemen by Linda Stratmann
Something's Come Up by Andrea Randall, Michelle Pace
The Anatomy of Deception by Lawrence Goldstone
Blurred Lines by Lauren Layne
Flame of Diablo by Sara Craven
Stargate by Pauline Gedge
Our partner